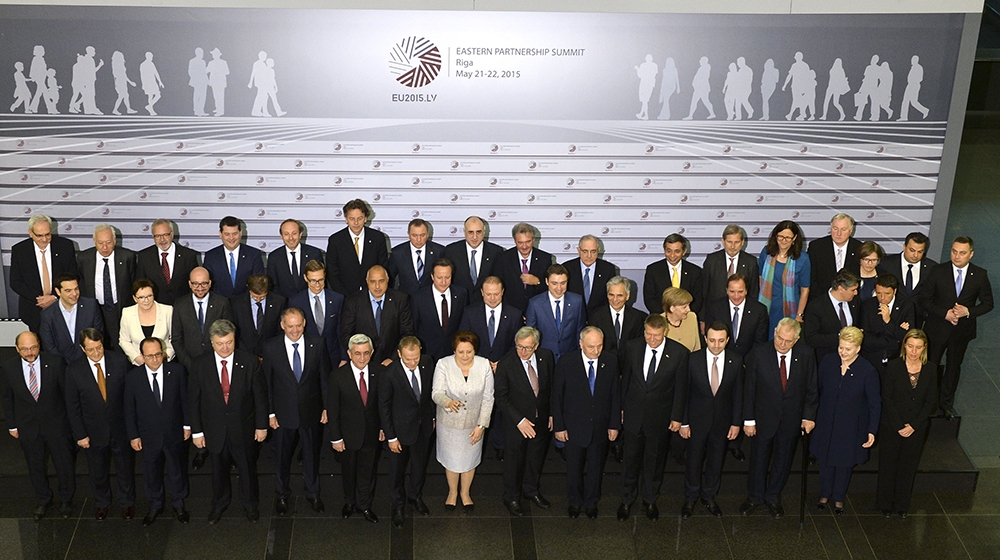 Heads of state from the European Union and other European countries, including Ukraine, Georgia, and Moldova, gather for a group photo session during the Eastern Partnership Summit 2015 in the Latvian capital on May 22. (Photo: European Council)

They knew it would not be a milestone event. But many in Georgia, Moldova and Ukraine nonetheless are finding it difficult to accept the results of the May 21-22 European Union gathering in Riga, Latvia.

All three countries – the stars of the Eastern Partnership, a six-member grouping of former Soviet republics (along with Armenia, Azerbaijan and Belarus) with which the EU is promoting dialogue – sense themselves at risk from a predatory Russia. In addition, Georgia, Moldova and Ukraine are grappling with moribund economies.

EU association agreements, it was hoped by many in Tbilisi, Chișinău and Kyiv, would help keep the countries on a reform-minded course. But so far, many complain, their EU ambitions have yet to produce substantive results. As a result, Euro-enthusiasm is on the wane.

“Georgians are suffering from a kind of European fatigue as there is nothing tangible coming,” noted Ghia Nodia, director of the International School of Caucasus Studies at Tbilisi-based Ilia State University, and an education minister under former President Mikheil Saakashvili. “[Russian President Vladimir] Putin looks stronger and more consistent, and Georgians have lost confidence that the EU can be a credible actor.”

A recent poll for the National Democratic Institute suggests that Georgian support for the EU is declining. Although 68 percent of 4,360 respondents expressed support for Euro-Atlantic integration, approval for the Russia-led Eurasian Economic Union has grown threefold since November 2013 to 31 percent of respondents.

In Georgia, where EU flags already fly over government buildings, offices and schools, the failure to receive a visa waiver for travel to EU states has left bruised feelings. “The feeling is that the decision [of not granting the visa waiver] is political, rather than based on these technicalities that apparently Moldova has fulfilled, Georgia has not. People just do not believe in that,” Nodia said.

Moldova received its visa-free status in 2014. But, there, too, many believe they should be further along toward EU membership.

Critics blame the government for failing to eradicate corruption, reform state institutions and prevent the embezzlement and money laundering of billions of dollars from Moldovan banks.

Earlier touted as the “success story” of the Eastern Partnership, Moldova now ranks as “simply a story,” drily remarked Leo Litra, a Moldovan senior research fellow at the Institute of World Policy in Kyiv, Ukraine.

“It is an exemplary demonstration of the fact that there is no irreversibility in the process of European integration,” commented Litra, a summit participant.

Nicolae Osmochescu, a professor of international law at Moldova State University, said the fact that Moldova’s coalition government must depend on the EU-neutral, Russia-friendly Socialist Party to get legislation through parliament is a hindrance for realizing the government’s EU agenda. “[The] interests, spheres of influence in the state and priorities in the government” have changed, he said.

Meanwhile, Ukrainian leaders complained that the EU should be doing more to promote Western values in formerly communist states. Describing his country as on “the frontline of the battle for peace in Europe,” Ukrainian President Petro Poroshenko questioned in a May 22 statement “whether [the EU] can bring a European perspective to countries that deserve and aspire to it?”

One Ukrainian commentator, however, maintained that the summit only reflected reality.

“[W]e need to be realistic. Ukraine is in [a] war, and it might take decades to recover from it,” said Dmytro Hubenko, executive editor of VoxUkraine, a Ukrainian news portal.

The summit’s final declaration “warmly” welcomed “the progress made by Georgia and Ukraine, respectively, in meeting the requirements for visa-free travel into the EU,” but the European Commission, the EU’s executive branch, has identified areas in which both have failed to meet benchmarks – the list ranges from policies on asylum seekers and human trafficking for Georgia, to anti-discrimination and corruption measures in Ukraine. The EU indicated that it will review the visa-free travel issue for Georgia and Ukraine in December.

Boris Iarochevich, deputy ambassador at the EU Delegation in Georgia, senses the disappointment at the failed visa deal, but also advised that Georgians, including government officials, needed to keep things in perspective.

“There were too many expectations raised, a lot of pressure,” he explained. For all of the progress made in meeting EU requirements for civil rights laws and other areas, implementation remains a challenge.

A fresh assessment of Georgia's preparations for visa-free status is due at the end of this year. “Georgia will get it" eventually, predicted Iarochevich.

Georgian officials have said the same, and deemed the summit “successful.”

EU Deputy Ambassador Iarochevich believes that the visa-free regime is not what really concerns Georgians. “The main challenge for most people is the economy, to produce more, to have an income and then maybe they can travel to the EU.”

The EU is taking steps to help Georgia, Moldova and Ukraine cope with severe economic doldrums. Brussels is making a 1.8 billion euro (over $2 billion) loan available to Ukraine, the largest credit the EU has ever given to a non-member state. All three countries also will receive 200 million euro (over $227.9 million) grants from the EU in a bid to encourage investment in small and medium enterprises.

Such moves do not appear to have resonated deeply with the public at large in the three recipient states.  As one Ukrainian outlet put it, all that Ukraine got in Riga was money and homework assignments.

This text was amended to clarify a statement by Deputy Ambassador Boris Iarochevich about the EU granting a visa-waiver to Georgia.

Monica Ellena and Giorgi Lomsadze are Tbilisi-based freelance journalists. Victoria Puiu is a journalist who writes for the weekly newspaper Timpul (Times) in Chișinău, Moldova.