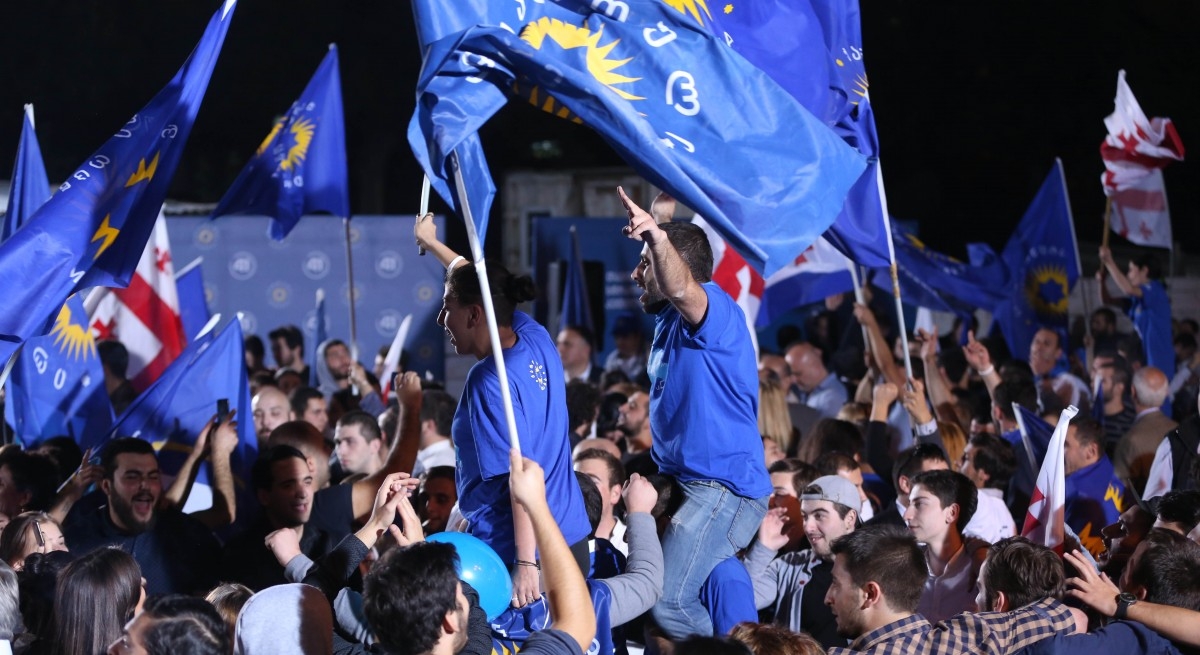 Supporters of the ruling Georgian Dream party celebrate victory on October 9. The elections left parliament firmly in the hands of the party, with 48.65 percent of the vote. United National Movement with 27.12 percent and the Patriots’ Alliance of Georgia with 5 percent also cleared the threshold to enter the legislature, according to preliminary results. (Photo: Georgian Dream)

A new, Moscow-tolerant player looks set to enter parliament in Georgia after barely clearing the bar in the October 8 elections. Meanwhile, leaders of the country’s fervently pro-Western United National Movement are debating whether to boycott the 150-seat legislature.

The elections left parliament firmly in the hands of the ruling Georgian Dream party, with 48.65 percent of the vote. While not a majority, the party is expected to make further gains in 51 runoff races, to be held before November 2.

Ex-President Mikheil Saakashvili’s United National Movement, which lost power to the Georgian Dream in 2012, finished a distant second, with 27.12 percent of voters’ support, according to preliminary results. It has denounced the election as rigged, and currently is divided over whether or not to stay out of parliament.

Saakashvili, now a Ukrainian regional governor, favors a boycott, telling the UNM to hold consultations before accepting the official results and participating in the runoffs. On Facebook, one senior UNM MP, Elene Khoshtaria, described a boycott as “suicidal,” however.

A decision will be announced in a few days, the party’s top-listed MP, Davit Bakradze, told reporters.

If the UNM bows out, it will lose the chance to weigh in against two proposed constitutional changes that would reverse key Saakashvili-era reforms. One would make the nation’s president electable by parliament, an outcome that could eliminate presidential opposition to the ruling party. Another expected big change is bringing back parliament to Tbilisi from Georgia’s second largest city, Kutaisi, where it was dispatched under Saakashvili.

Without the UNM, the government would face just one opposition force in parliament – albeit, at barely 5 percent of the vote, not a formidable one.

The Patriots’ Alliance of Georgia, a grouping of six mini-parties, espouses the value of Georgian dance, Georgian supras and, most of all, what it describes as “Georgia’s interests.” Equipped with a TV station, it features among its leaders three nominees for a Nobel Peace Prize (nominated by supporters), one nobleman, one saxophonist, one former warlord, and one former karate champion, capable of breaking six “tied-together baseball bats with a single kick,” according to the Alliance’s site.

Many Georgians suspect the group of hiding pro-Russian sympathies. One of the Alliance’s leaders, newscaster Irma Inashvili, has spoken out in the past against Georgia’s hopes to join the European Union and the North Atlantic Treaty Organization.

She now supports EU membership, but deems Georgia’s chances to join NATO unrealistic and not worth further discussion.

The Central Election Commission (CEC) appeared split over what to do with the Alliance. Its preliminary result oscillated back and forth between 4.998 percent and 5 percent throughout October 10.

Claiming the election was fixed, Inashvili threatened to bring supporters to the streets. “It will become the end of this government,” she said.

Eventually, though, a decision was made – 5 percent, pending final results.

The consequences of the Alliance’s entrance into parliament may not be clear now, but at the very least it has gained another prime podium from which to address a national audience.

Georgian Institute for Politics Director Kornely Kakachia sees no immediate threat of Georgia careening off its Western-integration track, but says that “there is a potential risk that the presence of a pro-Moscow force in parliament will desensitize the debate on Russia, and this, in the long term, could pose a threat to Georgia’s Western aspirations.”

Arguably, the disunity among two small, pro-Western parties which split off from the ruling Georgian Dream helped give the Alliance their opening.

The Free Democrats and Republicans were seen as progressive alternatives to the heavyweight Georgian Dream and UNM, but they garnered 4.62 and 1.55 percent, respectively, of the national vote, and failed to make the cut for parliament.

Former Defense Minister Irakli Alasania, leader of the Free Democrats, said on October 10 that he was taking a break from politics.

“Since I don’t see an opportunity to have an active impact on the processes in the country, I’ve decided to exit politics temporarily,” he told a news conference.

Outgoing Parliamentary Secretary Davit Usupashvili, leader of the Republicans, said his party was going back to square one.

But disunity is not the only potential cause of the frittering away of Georgia’s pro-Western opposition.

Some UNM members and analysts have questioned the advisability of Saakashvili’s election-eve predictions of a UNM victory and vow to return to Georgia. “Saakashvili misstepped by reframing the election as a referendum on his personal return,” wrote Hans Gutbrod, a longtime Georgia observer, in his analysis of the election for Medium. Many voters “were not attracted to a referendum on bringing Misha, unreconstructed, right back in.”

Saakashvili was not alone in challenging the vote results. Aside from other groups, former Parliamentary Speaker Nino Burjanadze and opera star Paata Burchuladze, whose parties also finished below the threshold for parliament, have accused the CEC of catering to the Georgian Dream’s wishes as well.

International election observers took notice of irregularities and violent attacks on polling stations that marred the election, but said that the overall voting process was legitimate.