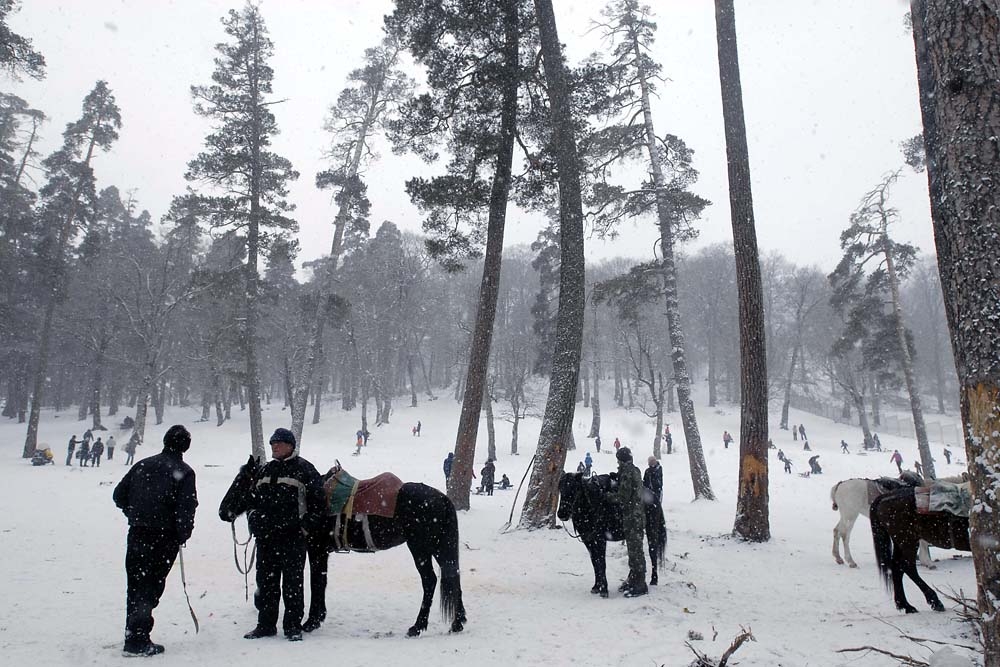 While Georgian is a primary source for fir tree cones for Danish Christmas tree producers, its forests are being depleted from over logging. (Photo: Molly Corso)

The South Caucasus country of Georgia is a source of much sought-after Christmas tree seeds. But its own forests are now under threat, as firewood is in increasing demand as a cheap source of heat for homes, schools and hospitals.

Before the collapse of the Soviet Union in 1991, rural communities here relied on what were then relatively inexpensive heating sources, like diesel fuel, for their cooking and heating. Over the past 20 years, however, small, wood-burning stoves have become ubiquitous, as many Georgians, without access to natural gas or pressed for cash, have turned to the forests to heat their homes.

In a recent survey of 2,000 villages nationwide, the Caucasus Environmental NGO Network (CENN) found that between 75 to 96 percent of the villages, depending on the region, rely on firewood for heat. That number, noted Rezo Getiashvili, CENN’s environmental projects coordinator, even includes villages with access to natural gas.

Consequently, some forests have been depleted to such a degree that wood shortages could occur, the group claims. Hundreds of thousands of hectares of forests are estimated to be in peril after decades of misuse and mismanagement.

“The vast majority of the villagers agreed that the condition of the forests is very tough and it is getting worse every year,” said Getiashvili.

The Georgian government has partnered with the State Oil Company of the Azerbaijani Republic (SOCAR) to install natural-gas pipelines and infrastructure around the country. But even where the gas has been brought in, residents often lack the means to either purchase gas heaters or connect their homes to the gas system.

In Mukhrovani, a small village of 90 families 25 kilometers from Tbilisi, the public school uses logs to heat a handful of classrooms because the new gas piping stops 50 meters from its building.

To cover the cost of the firewood, the school saves money from its budget all year to collect the 900 lari (roughly $529) necessary to heat the building through the winter.

While firewood keeps the children warm, the situation is far from ideal.

A makeshift ventilation system of rusting pipes goes through windows to push the dust and smoke outdoors. As a result, when the weather is windy, some rooms are unusable, noted Principal Sveta Suborukava.

Out of the 2,086 public schools in the country, 1,453 depend on firewood for heating, according to the Educational and Scientific Infrastructure Development Agency, the government body that oversees school buildings. The agency is working to connect schools to the gas system where natural gas supplies exist.

But even villagers in Mukhrovani and elsewhere are opting for firewood because it is cheaper. Irakli Matchashvili, the biodiversity program coordinator at Green Alternative, a Tbilisi-based non-government organization, noted that while natural gas is affordable in Tbilisi, the costs can run up to twice as much in the regions – roughly from 50 tetri to 80 tetri (29 to 47 cents) per cubic meter.

The northern mountain region of Racha, home to many of Georgia’s Christmas-tree cones, ranks as one of the heaviest areas for firewood use, according to the CENN survey.

The search for firewood is not creating an immediate danger for this export industry, although investors have noted isolated incidents when trees on their lots were cut down or access to good seeds was cut off because the government was cracking down on illegal logging.

But Nata Peradze, the founder of Guerrilla Gardening Tbilisi, a grassroots activists’ group, believes the hunt for live Christmas trees – cutting down the actual fir trees instead of just harvesting the seeds – is adding to the strain on the country’s forests since small trees, the saplings needed to rejuvenate the forests, are the ones being cut.

Environmentalists like Green Alternative’s Matchashvili stress, though, that such uses for Georgia’s forests are not an insurmountable problem if the government starts to manage the resource. “The main factor of the unsustainable forest use is the absence of proper planning,” Matchashvili said.

The Georgian Ministry of Environment and Natural Resource Protection claims that it is taking measures to tackle the issue. Under a proposal passed by parliament this month, it plans to increase the number of forestry service personnel from 969 to 2,000 people, and has imposed relatively hefty fines (from between 200 to 600 laris, or $116.50 to $349.43) on illegal logging or felling trees in protected areas or on endangered lists. Cutting down Christmas trees now incurs a fine of up to 1,000 laris, or $582.38.

While some of these proposals are still awaiting implementation, Matchashvili praised the ministry’s efforts this year, noting that now it is just a matter of putting these recent measures to work to save the “very” small number of forests left for public use.

“The main risk is if it continues business as usual,” he said.

Guerrilla Gardening Tbilisi has received financial support from the Open Society Georgia Foundation, part of the network of Open Society Foundations. EurasiaNet.org operates under the auspices of the Central Eurasia Project, a separate part of that network.

Molly Corso is a freelance reporter and photojournalist in Tbilisi, Georgia.