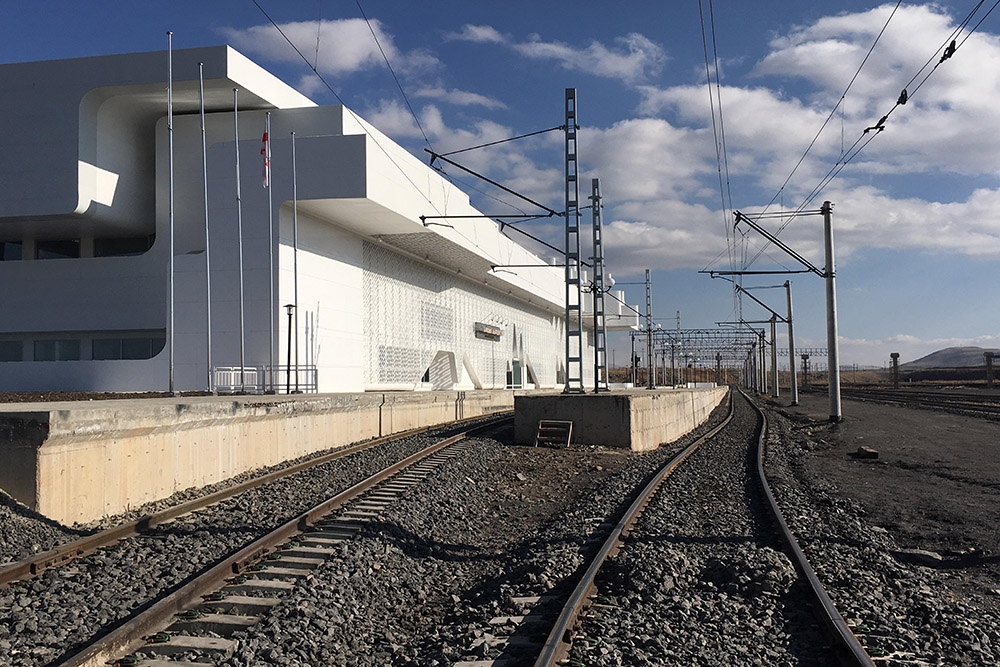 On the outskirts of the sleepy Georgian town of Akhalkalki, set against a barren backdrop, sits a gleaming, bone-white structure. Designed by celebrity architect Jürgen Mayer, this railway station on the Georgia-Turkey border is expected to serve as an important node in China’s global, $1-trillion infrastructure development project – dubbed the Belt and Road.

The station was opened in November as a key node in the Baku-Tbilisi-Kars (BTK) railway project, which boosters say will place the Caucasus at the center of trade between Europe and Asia.

But it has gotten off to a rough start. Its first cargo shipment from Kazakhstan was expected on November 1, but faced delays since the station has no lighting and the trains were unable to approach. Today, the building is deserted, and the accompanying railway is far from complete.

“It was officially opened, but it won’t be ready until at least 2018,” said Rima Gharibyan, director of the local media outlet JNews. “At the moment, it’s just for show.”

The Akhalkalaki station contains a mechanism central to the entire project – a gauge switch, allowing Turkey’s narrower European tracks to connect with the wider Soviet-era gauge still used by Georgia and Azerbaijan.

Georgia’s authorities hope the BTK will provide jobs and security for isolated Akhalkalaki, in a region with a large ethnic Armenian population that Tbilisi’s authorities have long suspected of harboring separatist ambitions.

“I believe that this forum will open up new opportunities for strengthening and deepening regional ties which will enhance economic growth and ensure security,” he said, speaking at the Silk Road Forum in Tbilisi on November 28.

“The mood in town is that the project is not for us,” Gharibyan said. “Over 1,000 could potentially work there, but in reality, none of us are.”

The involvement of outsiders has infused the discontent over the construction with an ethnic flavor. Over 95 percent of the residents of the town, which borders on Armenia, are Armenian.

“Look at the poor quality!” said Armen, a local taxi driver who has worked as a building contractor in Russia’s Khabarovsk region, zooming in with his Samsung camera to scrutinize the station’s mortar joints. “There is plenty of local talent here, but they [Turks and Azeris] are not interested in us [Armenians] – they don’t trust us.”

Locals also complain that there appears to be no long-term planning to involve the community in the station’s operations, with no local training programs or courses set up in the town to create a specialized workforce to operate the station in future. “One small college for railway engineering was supposedly opened in September,” Gharibyan said. “But it’s unclear whether this is actually true. When we asked whether they would inform locals about courses there they flatly told us no.”

“I only know of two men in Tbilisi doing studies related to the project, and both of them are Georgians from Akhalkalki” she added.

Driving through the town’s empty streets, it’s immediately apparent how little economic life there is. Market stalls sell fake clothing brands, but only in the shadow of boarded-up buildings. It’s a far cry from neighboring Akhaltsikhe, which is bustling with tourist traffic heading for the newly renovated Rabati castle complex.

The post-communist period has been particularly rough for Akhalkalaki. The first major setback came in 2007, after a Russian military base closed down. At its peak, the facility employed over 15 percent of the town’s residents. It also paid relatively well – employees reportedly earned $200-$300 per month, considerably more than the wages offered by other local employers.

Many former base workers have been unemployed since its demise, and many locals head to Russia in search of seasonal employment, with remittances playing a central role in the town’s economic life.

“Living in Russia is good, but staying here in Akhalkalaki is difficult” said Armen, the taxi driver and construction worker. “There are no jobs here and we can’t even afford basic medicine most of the time.”

“Men go to Russia for eight or nine months each year,” Gharibyan said. “They come back for three months to celebrate the holidays with their families, and then they are gone again.”

About half of all families in the town have a family member working abroad. But with Russia’s economic troubles in recent years – induced by a combination of sanctions and falling oil prices - the value of remittances has seen a severe drop, leaving many families vulnerable.

“Women are balancing too much work here with family and farming – it’s damaging our health,” said Kristina Marabyan, a former reporter for JNews. “But sitting hungry is worse, so what can we do?”