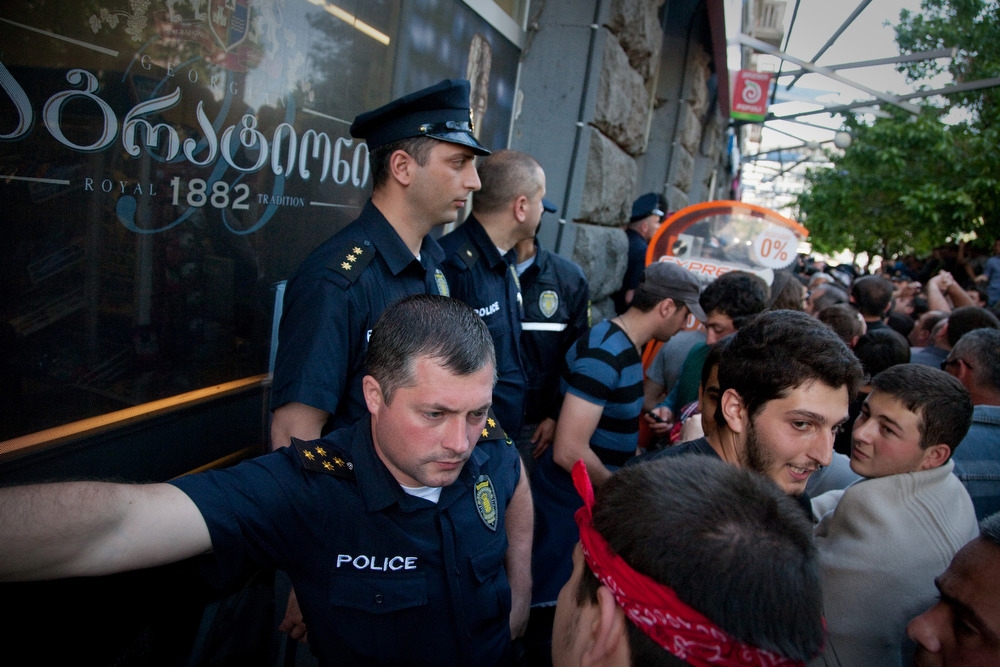 Police block entry to a supermarket during the May 17 clash between LGBT activists and an anti-gay mob. (Photo: Justyna Mielnikiewicz)

Georgian Prime Minister Bidzina Ivanishvili rose to power in 2012 on a pledge to depoliticize the powerful police force created by President Mikheil Saakashvili following the 2003 Rose Revolution. Yet while observers credit the government for putting an end to some alleged police abuses, concerns persist about the overall conduct of Georgia’s Interior Ministry.

For the governing Georgian Dream coalition, the stakes tied to those concerns are high, given that a presidential election is fast approaching. Rights advocates contend that measures taken so far by the Georgian Dream haven’t succeeded in boosting public confidence in the police force. Some observers also contend that Interior Minister Irakli Gharibashvili’s job performance leaves a lot to be desired.

Ironically, police reform ranks as one of the Saakashvili-led United National Movement’s most significant achievements during its tenure as the majority party in the Georgian parliament. In the years since the Rose Revolution, the police force steadily shed its reputation as a den of corrupt bunglers and gained a measure of respect for efficient crime-fighting.

But even as the police improved its performance on the street level, critics charged that the Saakashvili administration misused the Ministry of Internal Affairs (MIA) to protect its political power. Georgian crime specialist Aleko Kupatadze, a post-doctoral fellow at Oxford University’s University College, documented numerous abuses against government critics and opposition politicians – including the use of intimidation, improper surveillance and arrests – in a 2012 report for Tbilisi’s Center for Social Sciences. In addition the use of torture  against individuals in police custody has remained a persistent issue.

In an attempt to break with the past, Prime Minister Ivanishvili tapped as interior minister 30-year-old Irakli Gharibashvili, an individual closely linked with Ivanishvili family interests -- he formerly ran Ivanishvili’s charity foundation Cartu, sat on his Cartu Bank’s supervisory board, and managed the record label for Ivanishvili’s singer-son, Bera.

Two of the most powerful police agencies, the dreaded Special Operations Department and Constitutional Security Department, were closed, and their portfolios turned over to the Anti-Corruption Agency, the State Security Agency, and the Criminal Police, a special investigations unit.

But some civil-rights observers note that not all the changes have been for the good.
On three separate occasions -- a February 8 scuffle between Ivanishvili and Saakashvili supporters outside the National Library, a May 1 workers’ rights protest, and a May 17 attack against anti-homophobia activists – police in Tbilisi floundered in efforts to maintain public order.

While police now are “much less brutal” toward demonstrators, their overall response to the May 17 fracas was “disorganized” and “completely disorderly,” commented Gia Gvilava, manager of Transparency International Georgia’s Judicial Monitoring and Legal Advice Program. Other civil-rights activists have concurred.

“They disbanded the SWAT teams, the special units that deal with demonstrations, which is not as good as they think because you still need specially trained people in units to maintain order during big demonstrations,” Gvilava said.

Part of the problem, he noted, could have been a lack of qualified personnel.

As part of an alleged internal reform process, Gharibashvili suspended training requirements for high-level hires from January until the end of March. Three hundred and forty-one individuals were hired during this period, Gvilava claimed, citing Interior Ministry information. The ministry did not respond to Transparency International Georgia requests for information about the exact positions filled, he said. It also has not responded to allegations that the new hires were intended for spots left vacant after a reported post-election purge.

Whatever the rationale for the suspension of hiring requirements, the ministry ran a “huge risk” by opening recruitment to potentially unqualified candidates, Gvilava asserted.

Interior Minister Gharibashvili also has been shadowed by allegations he arranged various government jobs for relatives, and used his position to secure the arrest of former Interior Ministry employees as retribution for the earlier detention of his father-in-law, Tamaz Tamazashvili, a former regional police chief, in 2011 on illegal weapons charges.

Gharibashvili has denied the charges. But Kupatadze, the researcher on law-enforcement issues, maintains that there is at least an appearance of impropriety surrounding Gharibashvili’s conduct. The Tamazashvili-related arrests impinge on any ministry claim to be “an impartial institution,” Kupatadze said, adding that jobs allegedly secured for relatives of Gharibashvili or his wife, Nunuka Tamazashvili, contribute to “a worrying trend of ‘legitimizing’ nepotism.”

At the same time, he continued, the ministry still relies “on technical and administrative measures to address the issue of crime."

Interior Ministry officials did not follow up on interview requests from EurasiaNet.org, despite repeated attempts. The ministry did, however, provide a list of recent reforms, which included national tests for “all operational staff,” standardized hiring requirements and a new code of ethics to promote human rights.

How these reforms will counteract many Georgians’ perceptions of diminished safety remains unclear. In March, the MIA released data that showed the number of crimes reported in November 2012, one month after the Georgian Dream’s election victory, increased by nearly 40 percent from the previous year to 4,598 cases.

The mass amnesty of 8,357 prisoners this January has also fanned public jitters. With an eye, conceivably, on his party’s chances in this October’s presidential vote, President Saakashvili recently chided the Interior Ministry for rehiring police officers the UNM-led government had jailed.

For human rights activist Nazi Janezashvili, the question now is how Georgia’s latest round of police reforms will be implemented. “Without competent staff, without implementation of regulations, nothing can be reformed,” Janezashvili said.

Kupatadze, meanwhile, predicted that the Interior Ministry’s performance “is likely to remain an issue over [the] short and medium-term.”