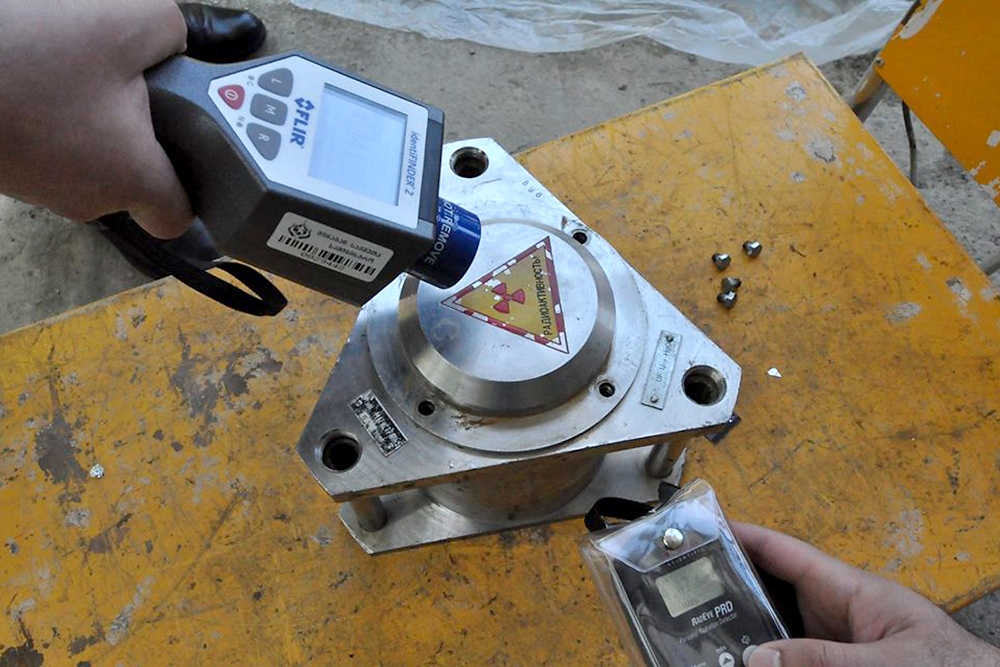 Three Armenians and three Georgians were detained on April 17 and accused of trying to sell uranium 238 for $200 million in the Georgian capital, Tbilisi. The container holding uranium 238 and another container holding cesium 137, which was seized in mid January in an attempt to sell for $100,000 by three other people, had Russian-language markings. (Photo: Georgian Intelligence Service)

Amid heightened concern about Islamic militant activity in Turkey, questions are being raised about the border security of its eastern neighbor, Georgia.

Three incidents within the past six months involving the attempted smuggling of radioactive materials – uranium 235 and 238, and cesium 137 – are driving concerns about Georgia. Turkey was the materials’ presumed destination, some experts say.

Court proceedings in the first of the cases began on July 8. Those accused in the alleged smuggling schemes face prison terms of up to 10 years, if convicted.

The items transported were small in quantity, but huge in potential consequences, if ever used with malevolent intent. Uranium 235 is a fissile isotope used in nuclear reactors and atomic bombs. Uranium 238, though not fissile, can be used to produce a divisible isotope of plutonium, a major ingredient in nuclear weapons. Cesium 137 is a reactor-produced isotope suitable for a dirty bomb.

Georgia has had to contend with nuclear smuggling ever since the Soviet Union collapsed in 1991.

Currently, Georgian prisons hold 24 individuals either convicted of or charged with smuggling radioactive materials; eighteen are Georgian citizens, five are Armenian and one is Russian, according to the Ministry of Corrections and Legal Assistance.

Officials are not commenting on precisely how the radioactive materials were transported to Georgia. The head of Georgia’s state-run agency of nuclear and radiation safety, Vasil Gedevanishvili, insisted that security procedures in this South Caucasus country are sound. He told EurasiaNet.org that, thanks to longtime American technical assistance, all Georgian border crossings “can detect even if a car had driven in an area of radiation and its tires kept some trace” of nuclear or radioactive materials.

The US embassy in Tbilisi identifies border-security and blocking nuclear smuggling into Georgia as "a top priority." Since 2006, the US State Department's Export Control and Related Border Security (EXBS) Program has spent $18 million "to develop Georgia’s capacity to regulate trade and transfer of dual-use goods, equipment, and technologies that can be diverted to illicit weapons programs, and to establish related border enforcement measures," the embassy commented to EurasiaNet.org. The National Nuclear Security Administration and Defense Threat Reduction Agency also play a role in strengthening Georgia's defenses against nuclear smuggling.

Gedevanishvili and other Georgian officials, however, sidestepped questions about the recent spate of arrests for transporting nuclear and radioactive materials. Unrest to the south of Turkey, in Syria and Iraq, would seem one possible contributing factor. Little doubt exists, however, that Turkey is smugglers’ ultimate destination.

“They hope Istanbul is a big and easy market to get a client, but the Turkish police are watchful,” said Tbilisi State University political scientist Aleksandre Kukhianidze, who specializes in security topics.

In written comments to EurasiaNet.org, Turkish Ambassador to Tbilisi Zeki Levent Gümrükçü emphasized that Turkey has “good cooperation” with Georgia to prevent “WMD trafficking” and that “adequate measures at our borders” are in place to prevent the transit of nuclear or radioactive materials.

“The measures in place are under constant review and necessary improvements are done continuously,” Gümrükçü wrote.

Over the next five years, the EXBS initiative with the United States will focus on security along the Georgian-Turkish and Georgian-Azerbaijani land borders. The program already has worked to enhance the government's ability to detect and stop "WMD and related materials 'on the move' along Georgia’s Black Sea coast," the US embassy wrote.

Tbilisi’s latest arrest, on April 28, involved five Georgian men who had transported over 1.6 grams of uranium 238 isotopes and just under a quarter of an isotope of uranium 235 to an apartment in the Black Sea coastal resort of Kobuleti, not far from the Turkish border. The government charges that the men planned to sell the wares for $3 million to an undercover agent.

Containers for the uranium 238 and cesium 137 had Russian-language markings, but Georgia’s National Security Service did not respond to questions about the materials’ origin.

In the past, Tbilisi has generally identified Russia as a source of nuclear materials, claiming that the breakaway territories of South Ossetia and Abkhazia can serve as transit routes into Georgia for smuggled materials. Georgian authorities tend not to suspect that the Metsamor nuclear plant in Armenia is a source of the materials.

The Russian government insists its nuclear stockpiles are well protected. But the 2016 Nuclear Security Index, created by nuclear-security specialists and the Economist Intelligence Unit, ranked Russia as the worst among 24 countries with weapons-usable nuclear materials when it comes to risk environment.

Georgia ranked 35 out of 152 non-nuclear states for security against trafficked nuclear materials; Turkey was 27th.

Shota Utiashvili, the former head of the Interior Ministry’s Department of Analysis and Information, maintains that getting such substances in and out of Georgia is no easy task. In 2006, Russian citizen Oleg Khintsagov managed to bring in 100 grams of highly enriched uranium only because Georgian border police switched off their monitors as part of a sting operation, Utiashvili recounted. Khintsagov entered Georgia through its northeastern Kazbegi-Zemo Larsi border crossing with Russia.

Weapons-grade uranium smuggling cases also occurred in Georgia in 2003 and 2010.

Whether or not border police this year turned off their monitors to follow the route of smuggled materials is not known.

The US embassy believes that Tbilisi's success in blocking three smuggling attempts this year indicates that its "capacity to detect and prevent smuggling of nuclear material has been significantly enhanced as a result of the U.S.-Georgia partnership . . ."

Yet Utiashvili acknowledges that Georgia’s monitoring devices are not foolproof. “If you place such materials in a big lead box, then, of course, the detector monitor will fail to discover it,” he said. “It’s impossible to hide such a box in a car, but in a train, it’s possible. So, theoretically, this can happen.”

Poverty appears to be a factor in the smuggling cases. Official unemployment is in the double digits, and the typical monthly income is pegged at just over $122 (284 laris). Thus, acting as a courier can be an economically attractive proposition for many Georgians.

Tamila Kutateladze, the defense attorney for one of the men detained on April 28, Amiran Chaduneli, told EurasiaNet.org that her client comes from a socially vulnerable family, and “would have accepted whatever he had been paid” to help sell the uranium.

She contends that her client was an unwitting participant in the smuggling scheme, saying that acquaintances sent Chaduneli cellphone photos of a package they wanted him to forward to someone else, adding that her client did not know the container held uranium. No mention was made of compensation, she claimed.

-- This text was updated on July 15, 2016 to provide remarks from the US embassy in Tbilisi. A correction was also made. The story formerly reported that Amiran Chaduneli had been sent cellphone photos of a package that he was meant to collect. Instead, he was sent photos that he was meant to forward on to another person.