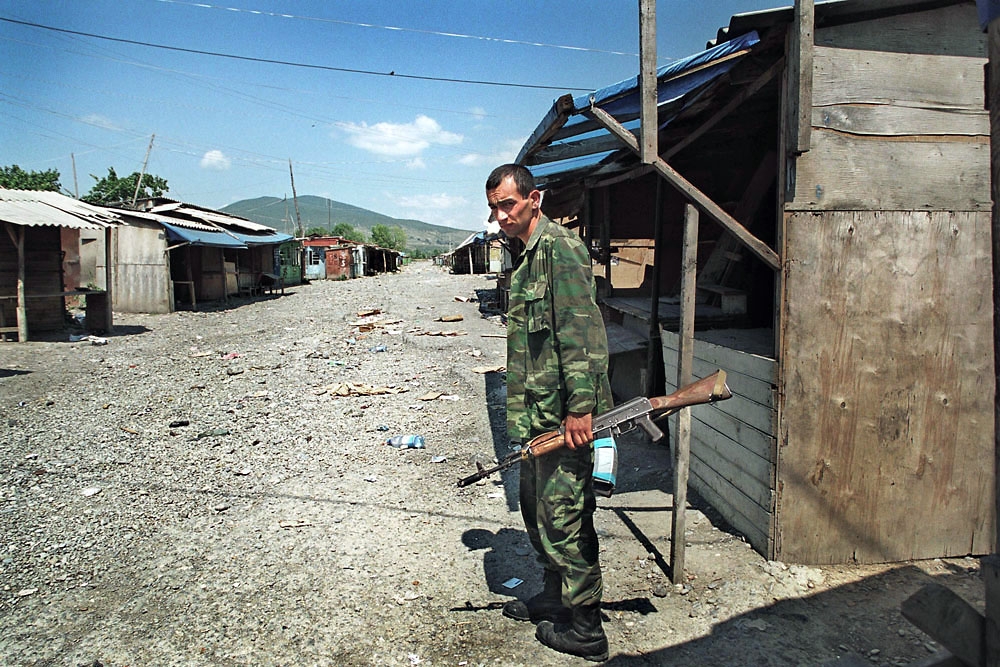 2004: A Georgian policeman guards the Ergneti market, which was closed two months earlier. 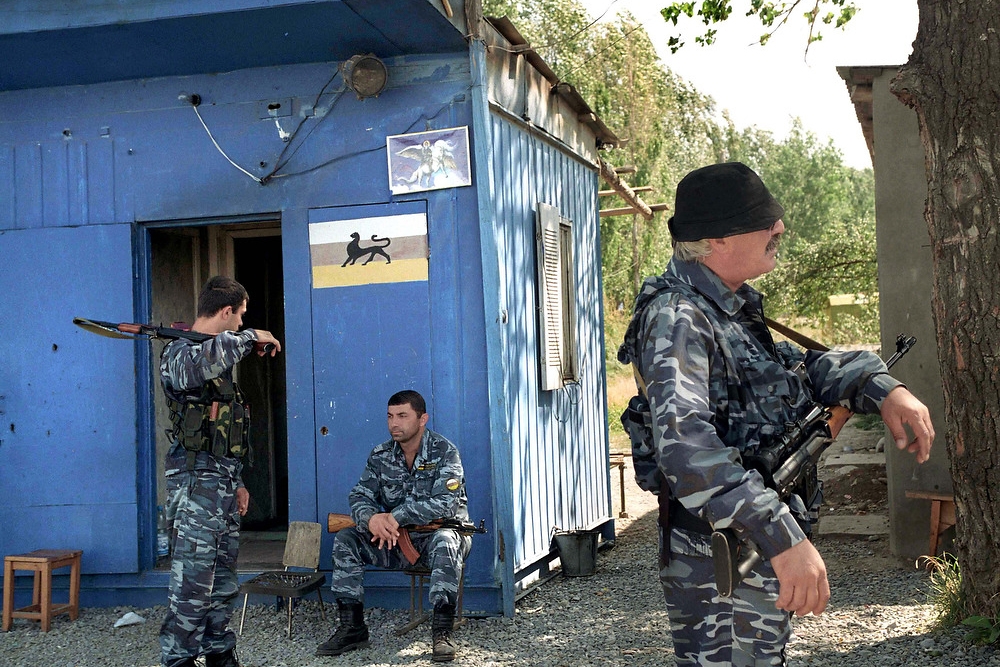 2004: South Ossetian soldiers man the checkpoint on the road to Tskhinvali in the so-called neutral zone. 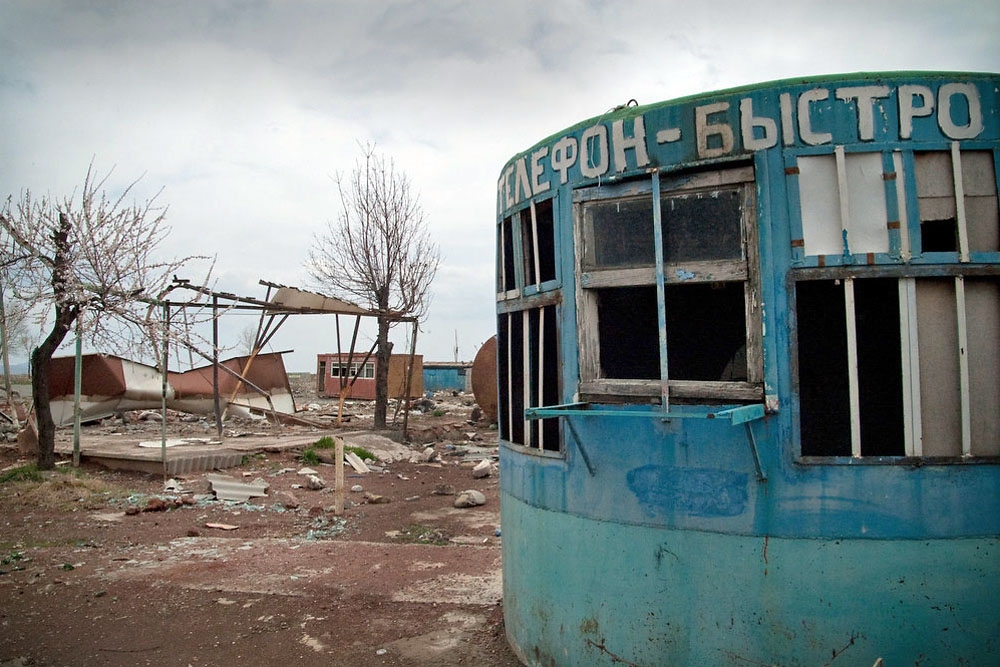 2005: The market was located in a neutral zone between a South Ossetian checkpoint and a Georgian police checkpoint. 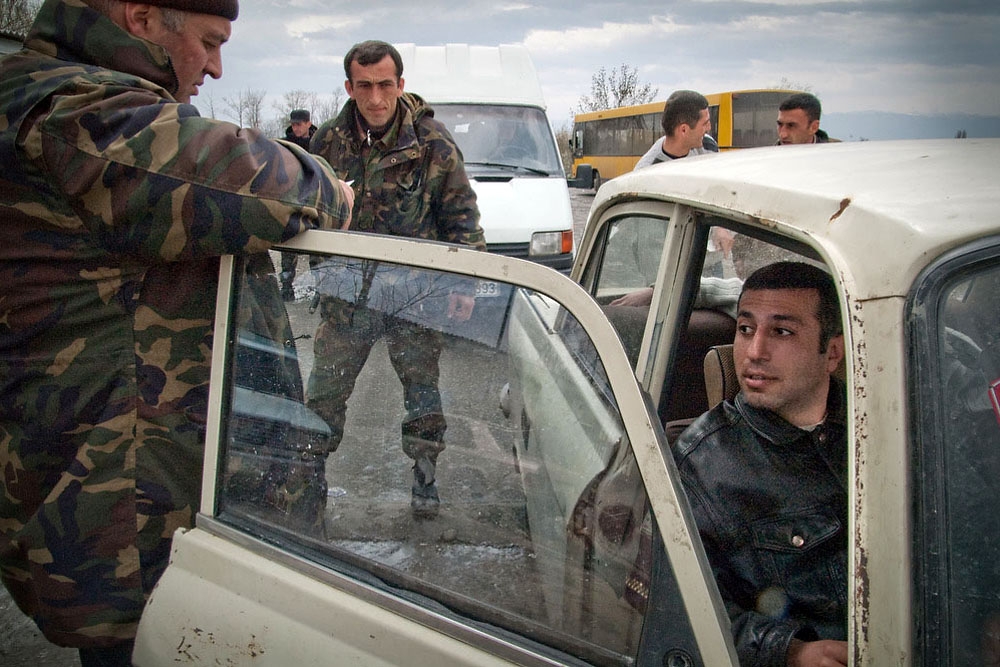 2005: Georgian police review documents at a checkpoint leading to Tskhinvali via the closed-down Ergneti market. 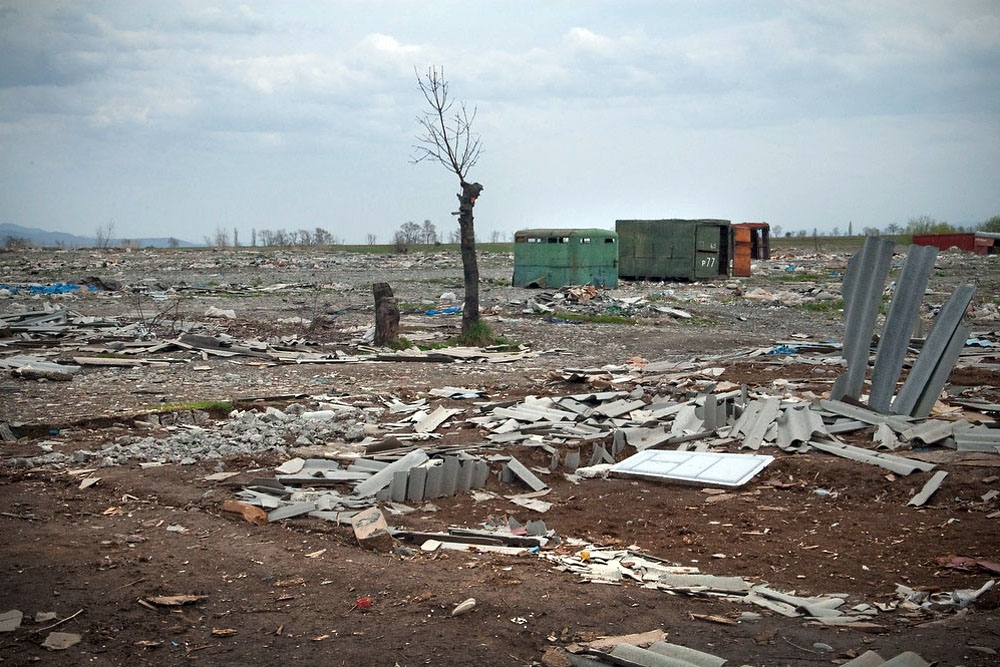 2005: Following the closure of the market, very little remains. 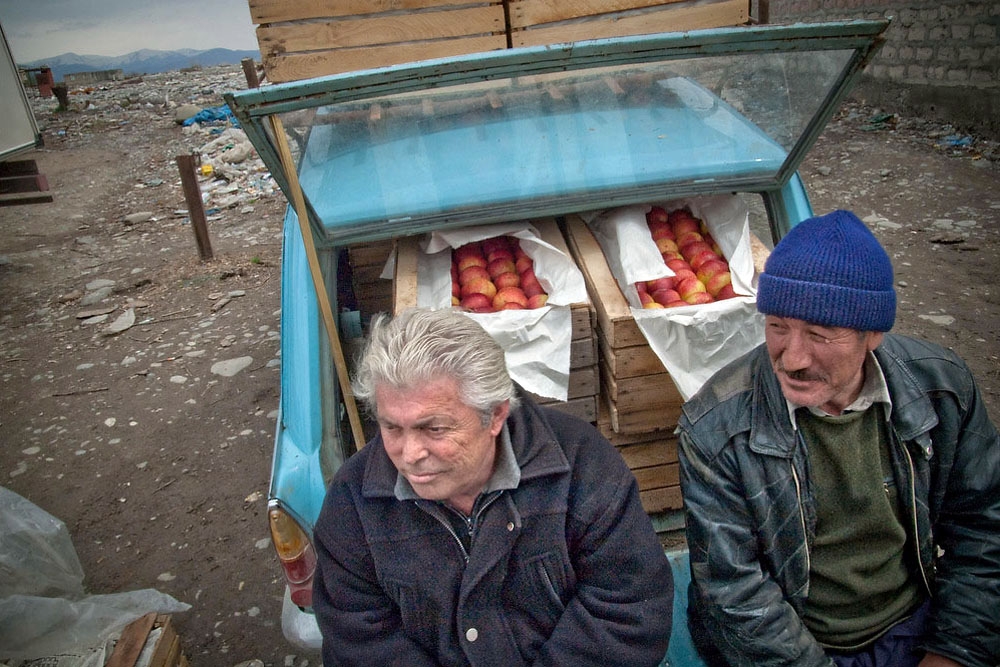 2005: Farmers from Gori sell apples on the edge of the neutral zone. 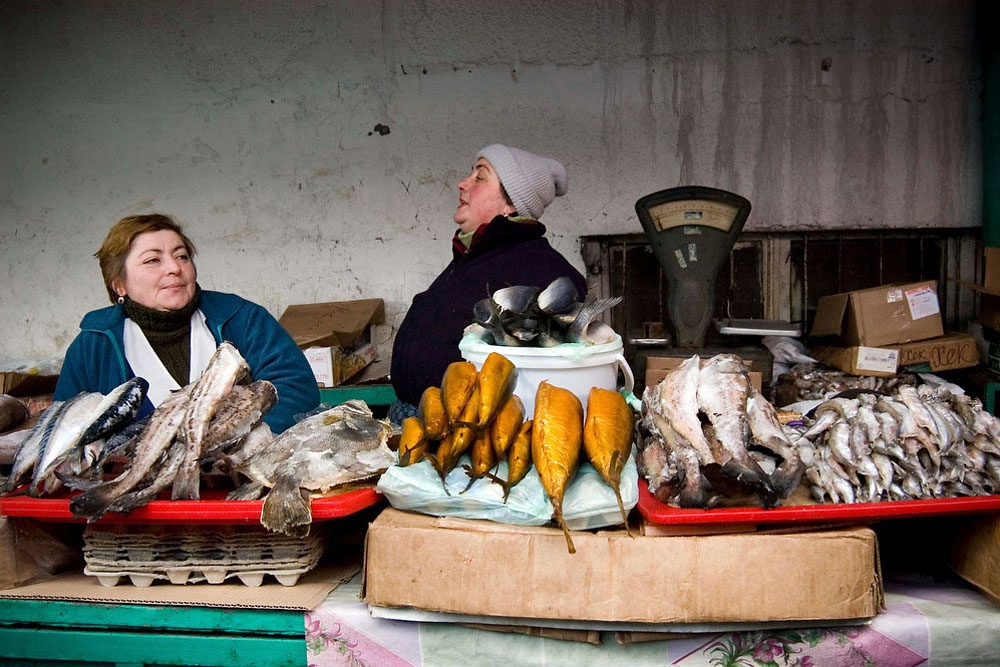 2006: Women sell dried fish at the open market in Tskhinvali, where even Georgians sold products until the 2008 war. 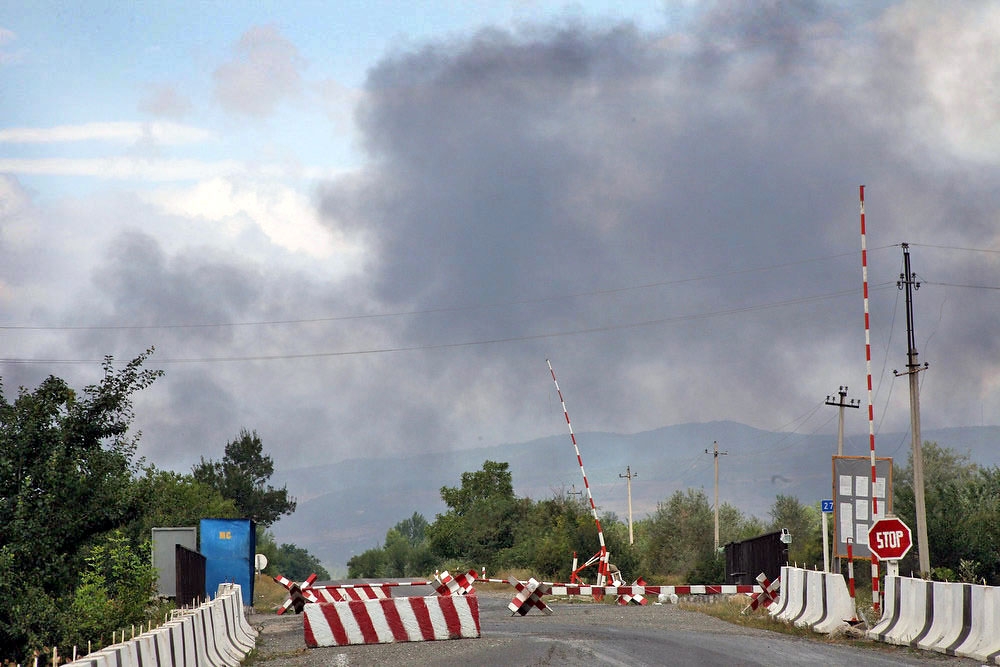 2008: On the first day of fighting smoke drifts from the Ossetian controlled territory across a Russian checkpoint near Ergneti. 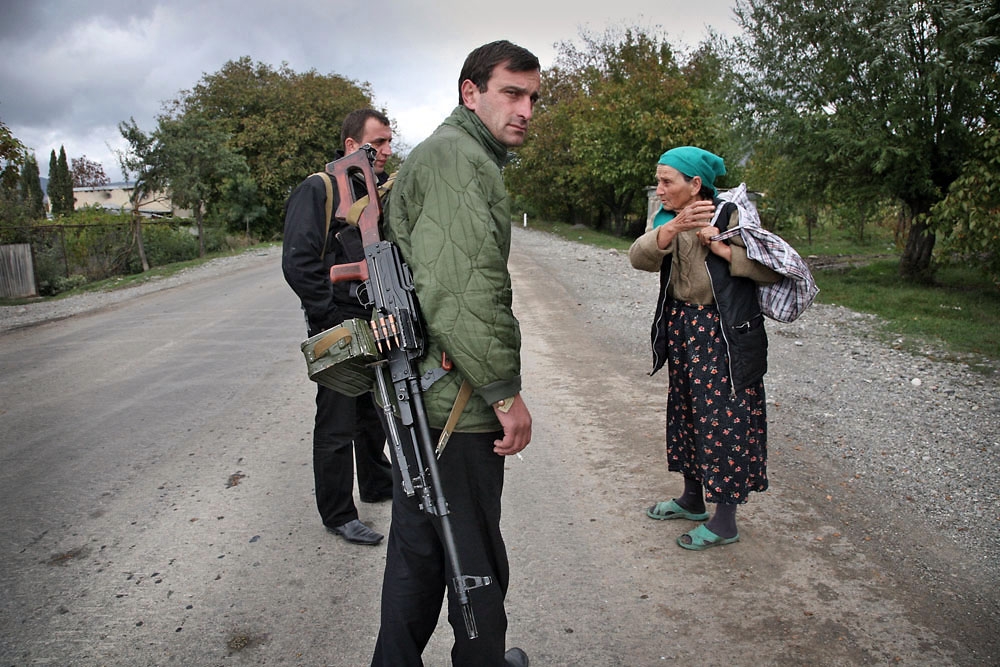 2008: Georgian police talk to a local woman in Ergneti a month after the start of the conflict. 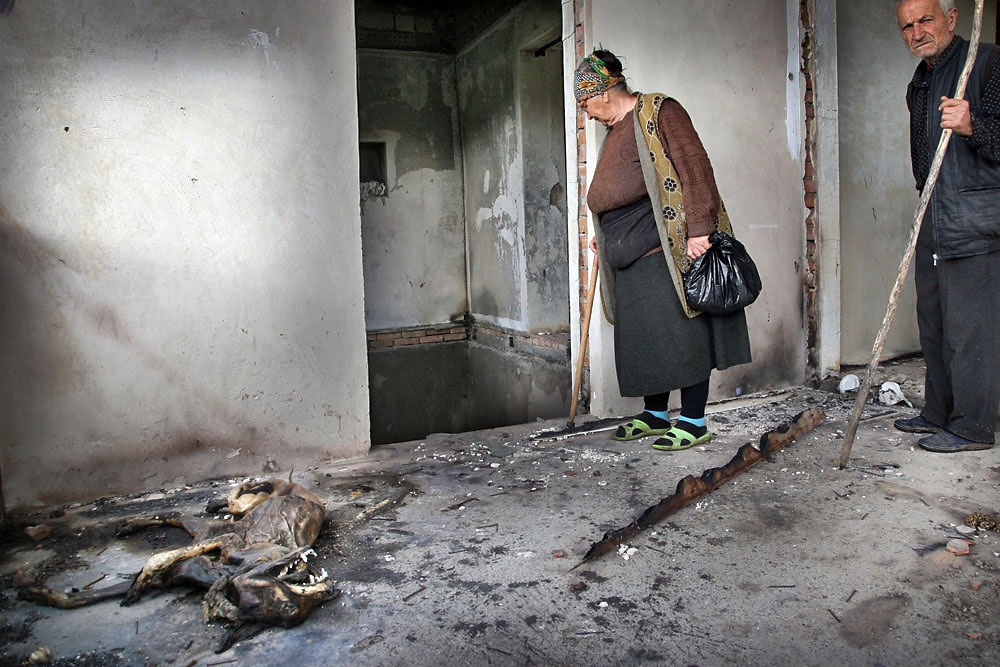 2008: A Georgian family returns to their destroyed home and killed dog in Ergneti, a month after the fighting. 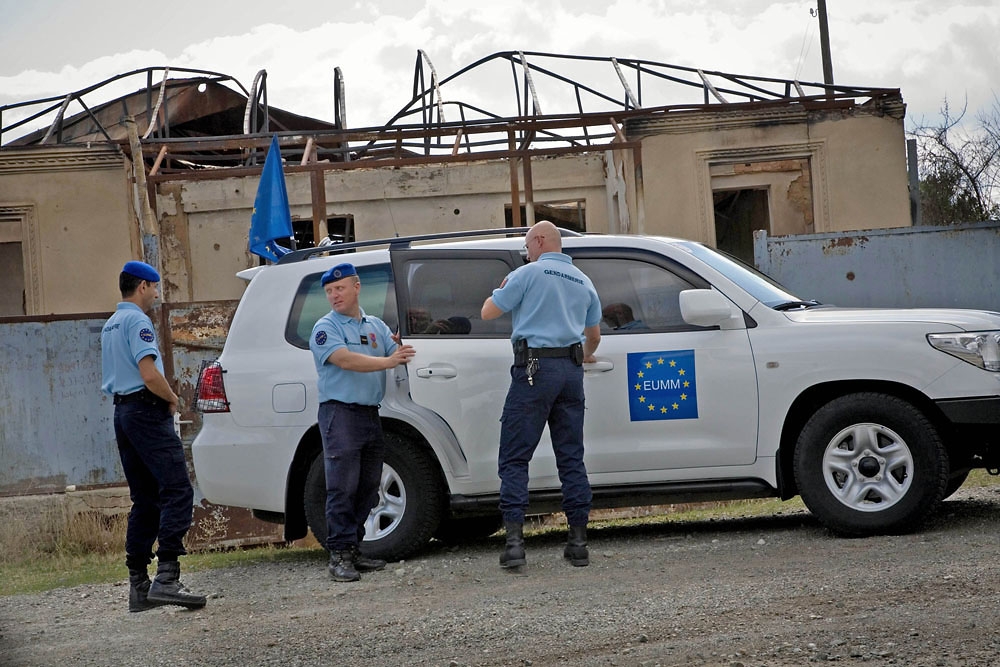 2009: French EU observers get into their vehicle next to a burned house in Ergneti. 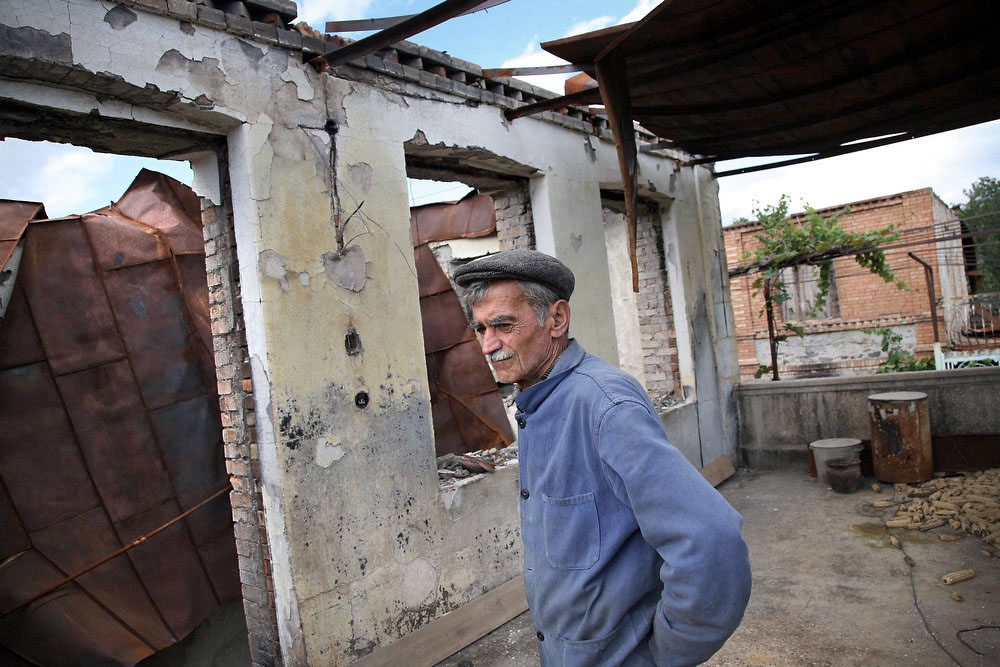 2009: Ivane Dvanishvili inspects his son's house, which was looted and burned during the August 2008 conflict. 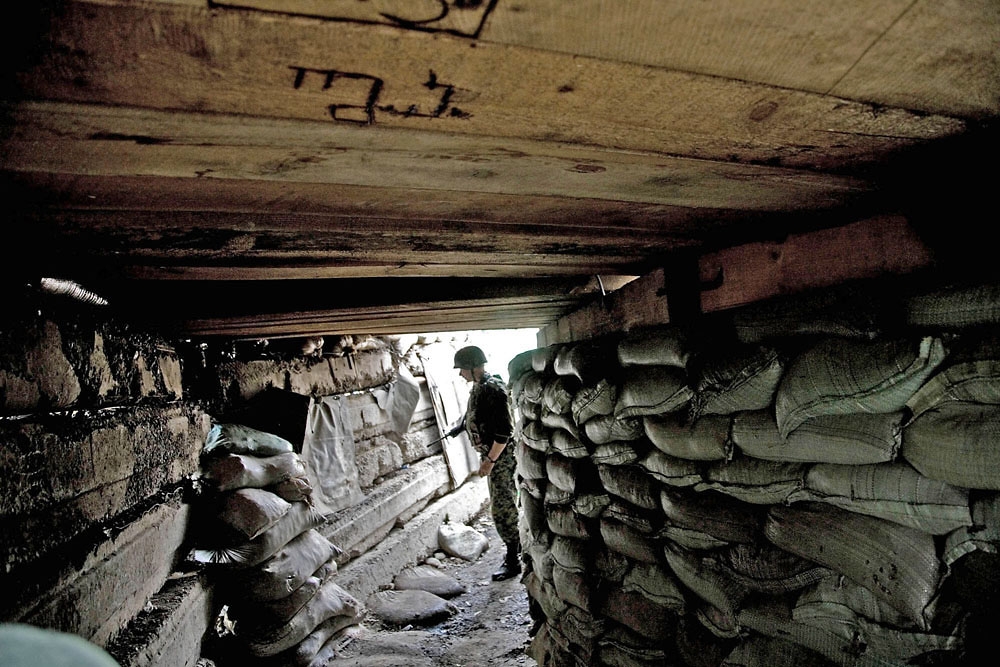 2009: A Georgian policeman guards a fortified post on the road leading to Tskhinvali. 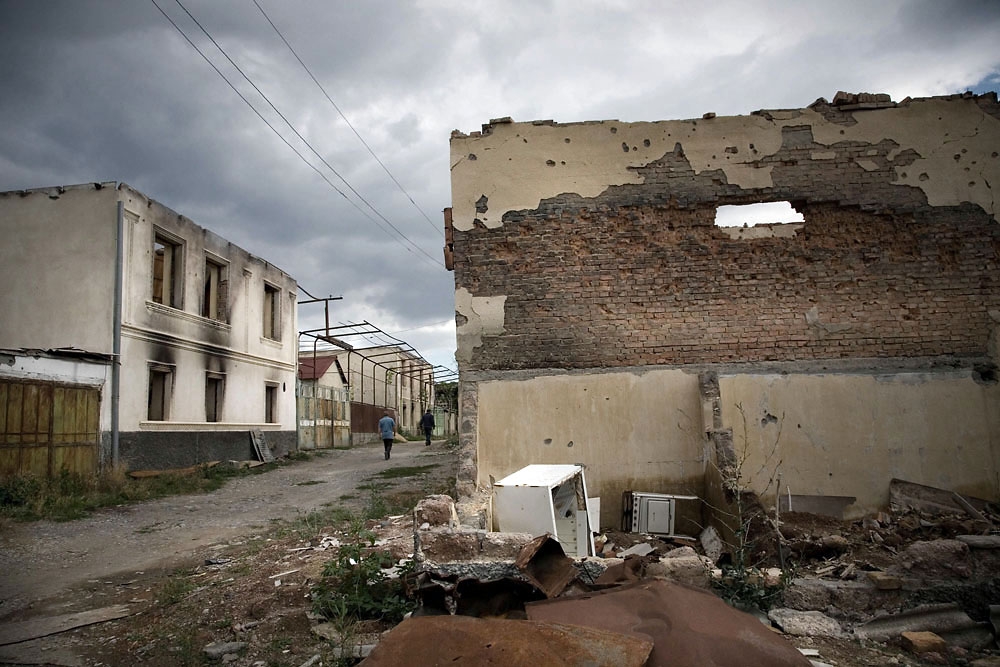 2009: Villagers survey the damage to their homes a year after the fighting. 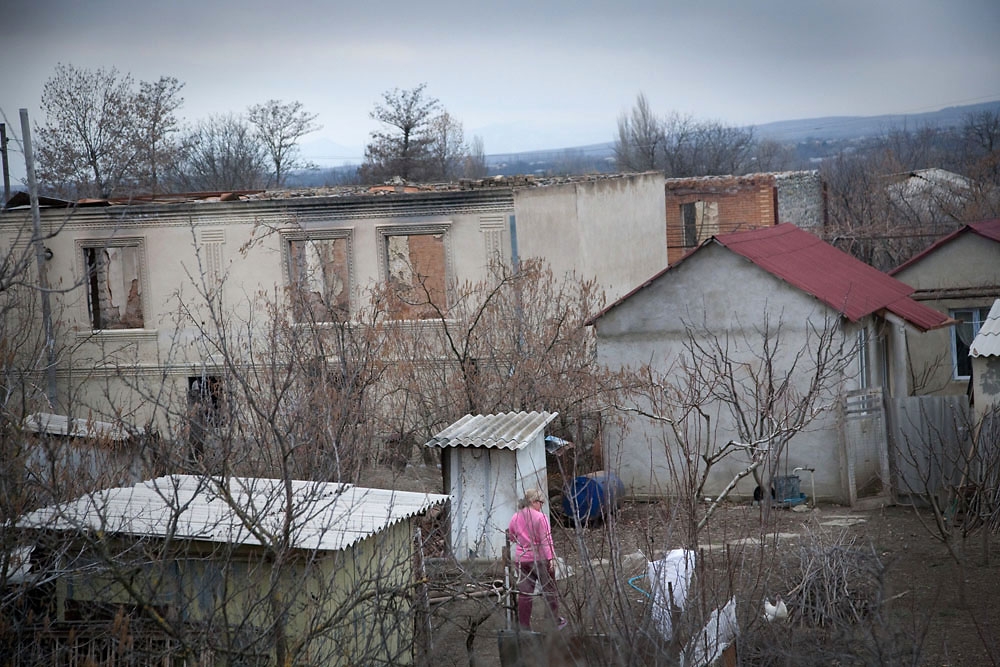 2013: Several Georgian families continue to live in new homes near the border with South Ossetia. 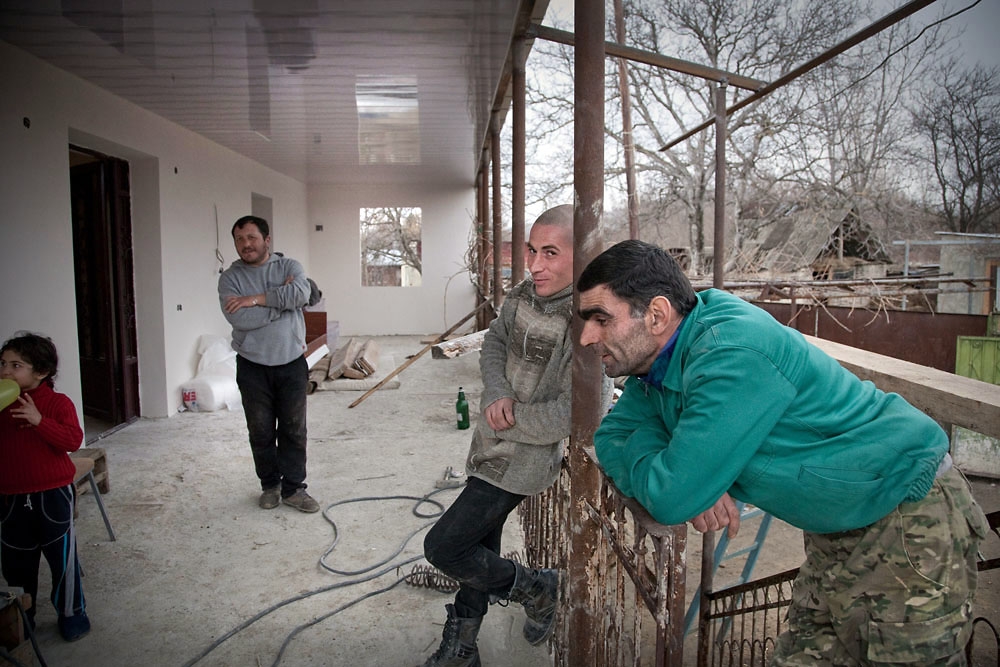 2013: The Danish Refugee Council provided materials to help some Georgian families rebuild about 50 houses in Ergneti. 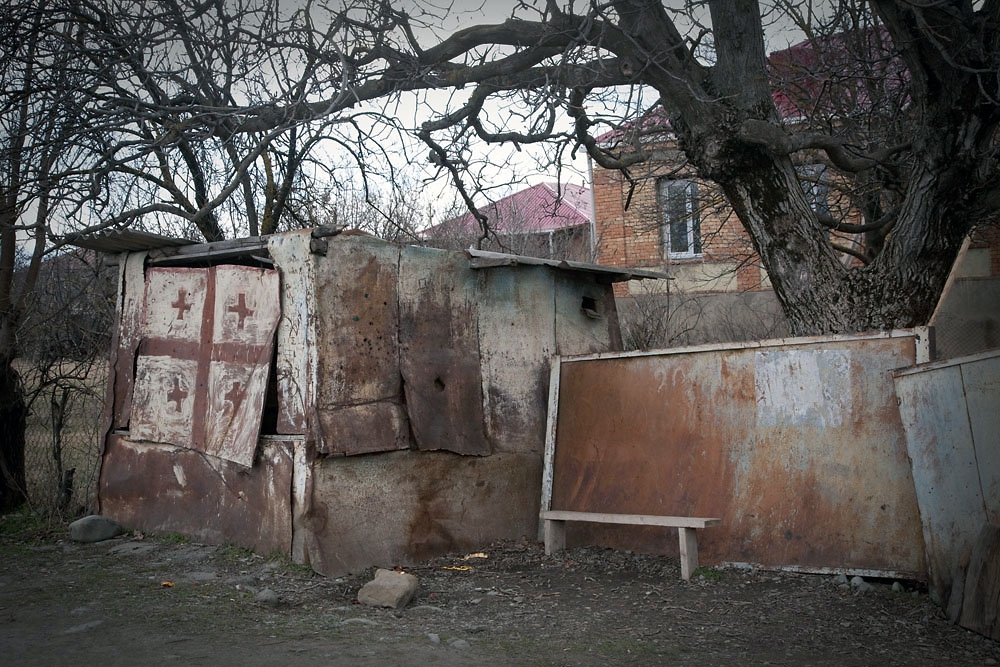 2013: A painted Georgian flag on a rusting metal plate covers the window to an abandoned kiosk. 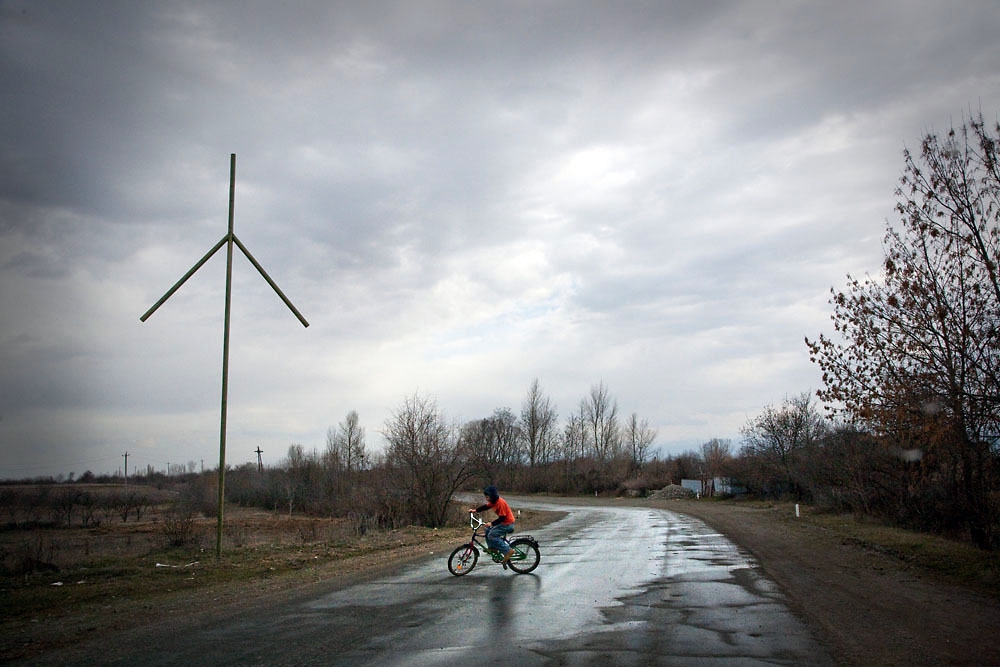 2013: A boy rides a bike on the outskirts of Ergneti on the road leading to Tskhinvali.
prev
next

In the Georgian village of Ergneti, many still look at the South Ossetian peace process down the barrel of a gun. But villagers and the Georgian government hope that, one day, progress will be measured by growing trade at the local market.

Located between South Ossetian and Georgian checkpoints on the road between the Georgian regional center of Gori and the Russian city of Vladikavkaz, Ergneti today is one of the coldest spots in the frozen conflicts involving Georgia and the breakaway territories of South Ossetia and Abkhazia. That wasn’t always the case: the town was once the site of one of the largest wholesale markets in the Caucasus.

A decade ago, thousands of ethnic Ossetians, Georgians and others used to mingle and trade freely each day, despite the territorial conflicts among them. Then, in 2004, the government of Georgian President Mikheil Saakashvili closed the market down on the grounds that it was a smuggling den that was costing the Georgian state $120 million per year in lost tax revenue.

For Ergneti residents, the market’s closure meant a loss of jobs and income. Still trying to rebuild homes that were looted and razed by South Ossetian militia during the 2008 Georgian-Russian war, their options for employment are now few. The village’s perilous location discourages pretty much any economic activity other than subsistence farming. Georgian police manning the sandbagged border crossing point to a burned-out hotel 100 meters away and say there are no longer snipers there. Villagers point out where Russian tanks stand with their turrets aimed at them.

In a campaign speech last summer, calling the Ergneti market’s closure a huge mistake, Prime Minister Bidzina Ivanishvili promised to reopen the bazaar in a bid to normalize ties with South Ossetia.

But, in his efforts to make that pledge a reality, Prime Minister Ivanishvili needs South Ossetia’s cooperation and, so far, the separatists are in no hurry to re-establish links with Tbilisi. On January 28, Boris Chochiyev, the region’s de-facto prime minister, warned that resuming cross-border trade with Georgian-controlled territory would bring “great harm to the republic of South Ossetia." He added that the issue should be “removed from the agenda,” the South Ossetian news agency Res reported.

Many people in the South Ossetian capital, Tskhinvali, however, like the idea of reopening the Ergneti market, according to Zarina Sanakoeva, a Tskhinvali-based journalist for RFE/RL’s Ekho Kavkaza radio service. Yet, political reality is another matter. “If you talk about opening the market, first you need to deal with the crossing of the border,” Sanakoeva said. “Everyone understands this.”

Nearly five years after the war, nobody from Ergneti crosses the border, locals say. Visits from the South Ossetian side also no longer occur.

Georgian State Minister for Reintegration Paata Zakareishvili supports reopening the Ergneti market to revive ties with South Ossetia residents. Both South Ossetia and breakaway twin Abkhazia, he maintains, should be engaged, not isolated, and commerce is the most neutral tool for accomplishing that.

But he cautioned that it’s too early to talk about reopening the Ergneti market. “The project should exist, but the foundation is not ready yet,” Zakareishvili said.

Tskhinvali reportedly refuses to talk to Tbilisi until Georgian leaders recognize “the genocide” that South Ossetia’s de-facto government claims was committed against ethnic Ossetians during the 2008 war. Tbilisi’s policy “is not to respond to their [Ossetians’] rhetoric.” Instead, Zakareishvili said, the Georgian government aims to drop the aggressive language that he claims marked President Saakashvili’s territorial reintegration policies, and try to get Tskhinvali talking by clearing the air.

In South Ossetia’s case, this means providing gas, drinking water and irrigation to both sides of the administrative border, including to previously Georgian-held villages within South Ossetia. For Abkhazia, the focus is on restoring a railway from Tbilisi -- a proposal not universally embraced.

In January, President Saakashvili, who had also touted the railway idea in 2005, argued that addressing the issue outside of the context of the removal of Russian troops from Abkhazia would be “criminal and anti-Georgian.” Otherwise, the railway will “only serve Russia,” he charged.

Some independent Georgian analysts, including Giorgi Tarkan-Mouravi, co-director of the Institute for Policy Studies, agree. “Georgia and Abkahzia will just be a corridor for Russia and Armenia,” Tarkan-Mouravi predicted, in reference to the Russian military base near the Armenian town of Gyumri.

To Zakareishvili, that argument is weak. The railroad would bring benefits of economic development and reduced tensions to everyone, he insisted.

But before any progress can be made, he acknowledged, Russia will have to distance itself from its recognition of South Ossetia and Abkhazia’s independence – an unlikely move. “Russia has been a hostage of its own stance,” Zakareishvili said.

In Ergneti, residents maintain that, for both sides, it was ordinary people who ended up being the war’s biggest losers. The process of forgiveness needs more time and contact must be made, they say. Right now, the phone is the only option for contact between families and friends separated by just a few kilometers.

“We have to start talking and it’s possible,” said one Ergneti veteran of the 2008 war. “We need the market.”