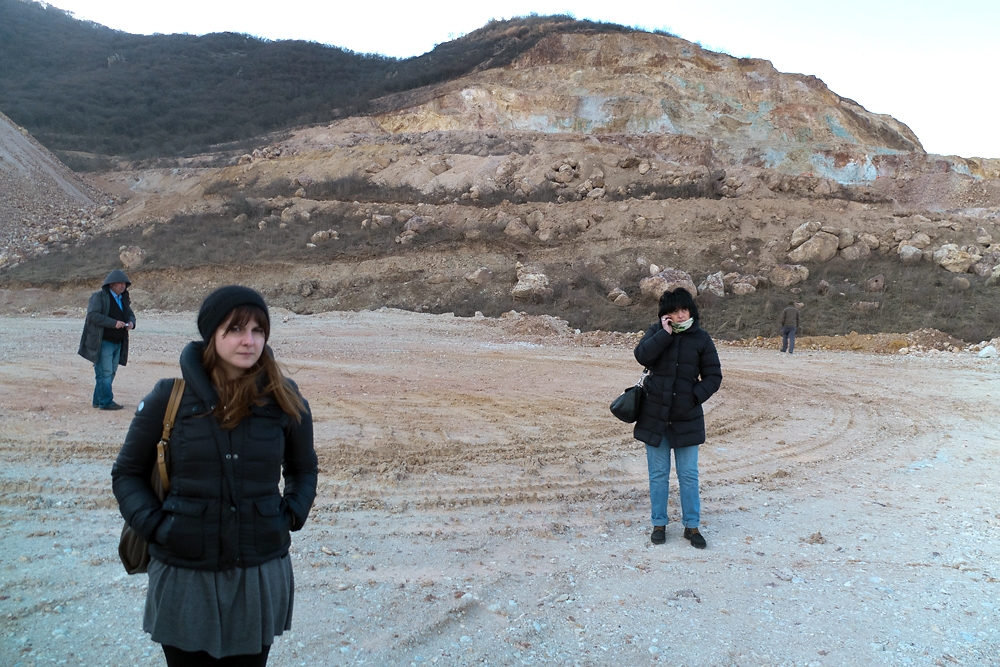 Once protected as a “cultural monument,” Sakdrisi-Kachagiani may soon be opened to gold mining. (Photo: Paul Rimple)

It turns out the choice between gold and historical preservation is an easy one to make for officials in Georgia: the government is going for gold.

EurasiaNet.org has learned the Georgian Ministry of Culture and Heritage Protection has given Russian-owned mining company RMG Gold the green light to excavate gold from Sakdrisi-Kachagiani, a nine-hectare site in southeastern Georgia that many archeologists claim contains the remnants of one of the world's oldest gold mines. In 2004, archeologists from the National Museum of Georgia and the German Mining Museum unearthed caves and mining tools at the site that are believed to date to the third millennium, BC.

It is uncertain when the company will begin mining the site. Approximately half of its workforce has been on strike since January 24, seeking higher wages. Some critics hint the company is using the archeological controversy as cover for questionable labor practices.

Opponents are also upset with the government’s evident willingness to allow the destruction of what may be a unique site. Officials have additionally brushed off a call by civil-society activists for an independent study into Sakdrisi the site’s archeological significance.

During a March 17 trip by a EurasiaNet.org correspondent to the area, accompanied by government representatives, two manned security vehicles sat outside the entrance to Sakdrisi-Kachagiani. The company continues to block entrance to the site, even to Ministry of Environment officials.  It cites the potential for damage by outsiders and lingering issues about the site’s status as the cause.

Caves and mining tools discovered at the site during a 2004 excavation by the National Museum of Georgia and the German Mining Museum are believed to date to the third millennium, BC.

But in its March 14 decision, the Culture Ministry cited a supposed lack of proof that Sakdrisi had ever functioned as a gold mine as a reason for lifting the site's protected status as a a "cultural monument." For the past eight years, Sakdrisi had enjoyed protection, a designation that prevented mining at the site, located near the village of Kazreti, where a vast copper mine owned by RMG Gold's sibling, RMG Copper, is located.

In a March 13 discussion with university students, Prime Minister Irakli Gharibashvili indicated that another factor played into the government’s decision to lift the site’s protected status. Noting the supposed lack of evidence for Sakdrisi's past, the prime minister stressed that RMG Gold has invested $300 million into the Georgian economy and employs 3,000 people. For a country with an official unemployment rate of 16 percent, an economic growth rate of under 2 percent such earnings and employment figures are not exactly trivial. In addition, the government experienced a drastic shortfall in tax revenues for 2013.

RMG Gold, an entity that evolved from Georgia’s former mega-mining company Madneuli, is believed to rank as one of the country's largest taxpayers. RMG Gold executives claim that to find fresh gold and maintain their operations, they need access to Sakdrisi-Kachagiani. With gold prices now at $43.67 per gram, it appears it wasn’t difficult for officials to buy into RMG Gold’s argument. In 2013, gold accounted for 2.9 percent ($35.52 million) of the country’s export earnings.

Gocha Aleksandria, vice-president of the Georgian Trade Union Confederation, is among RMG Gold’s critics who note that the company started complaining about the Sakdrisi ban’s adverse impact on earnings only after it was hit with a strike.  RMG Gold representatives have claimed that as long as they can’t mine the area, they cannot pay higher wages or keep on idle workers. On January 31, one week after the strike began, the company dismissed 184 workers allegedly for these reasons.

"We see it as retaliation for the strike,” Aleksandria said, speaking for the confederation's membership.

The government has appointed mediators to settle the strike, but Aleksandria says the process is moving slowly. Even with a full work force, Mikheil Kvaratskhelia, head of RMG Gold's Health, Safety and Environment Department, reckons it will be "a couple of years" before the Sakdrisi-Kachagiani site is blasted for mining.

Skirting Sakdrisi-Kachagiani, the last in a series of five ore pits, is not an option, the company says. Geologists claim that ore from the site, believed to be the richest in gold, must be blended with that from the four other pits to get a consistent grade of gold.  Preliminary exploration work has only just begun on the first pit, about two kilometers away.

Civil-society activists are bracing for a long fight. "The government has a responsibility to explain, to argue its position, not just ignore [opponents]," commented Kakha Bakhtadze, a representativer of the Caucasus Environmental NGO Network (CENN), one of the signers of a petition to Prime Minister Gharibashvili to preserve Sakdrisi's protected status.

The disregard that officials have exhibited toward those Georgians who want to protect Sakdrisi, "means that tomorrow the government can decide to destroy another cultural monument and do what it wants," Bakhtadze alleged.

The message the Culture Ministry is sending is mixed. In a March 14 statement, it called the claims about Sakdrisi's archeological value a "myth," yet it also announced intentions to invite independent international experts to monitor RMG Gold's mining at the site in case of "some scientific" discovery.

For Irakli Matcharashvili, program coordinator at Green Alternative, another of the Georgian NGOs opposing the ministry's decision, the plan makes no sense. "If this is a myth, why do they need a commission of experts? It's just words."

RMG Gold spokesperson Ekatarina Jojua has no information about a potential monitoring. "It's beyond our scope," Jojua said. "It's not clear who or how this will be done. It's up to the ministry."

Bakhtadze, the CENN representative,believes the government is suffering from short-sightedness. "The mine might be around for five or ten years. That's all. They will have destroyed the environment and [our] cultural heritage."