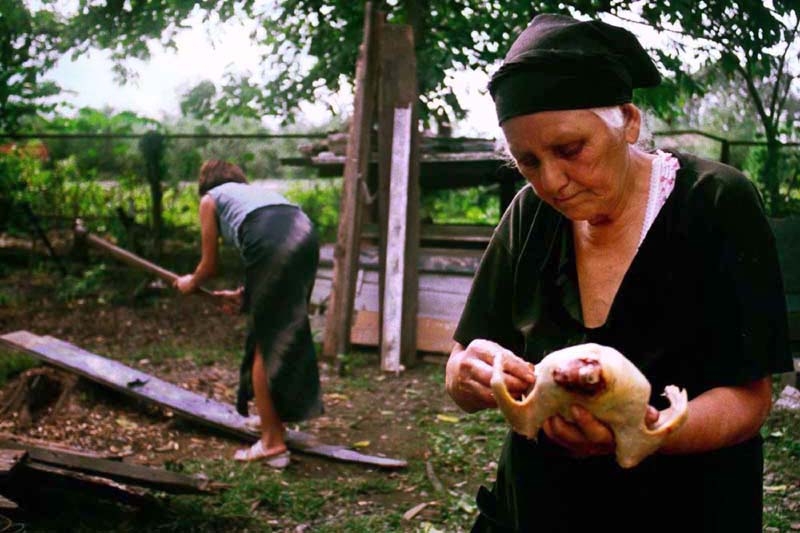 Georgia's upcoming parliamentary election is forcing campaigners from both, ruling and opposition parties, on the road to poor, rural regions. (Photo: Molly Corso)

A competitive parliamentary election race is taking shape in Georgia. As a result, the political process in the South Caucasus nation is diversifying – getting out of the capital and into the countryside.

With the unemployment rate estimated at over 30 percent (the official rate stands at 15.1 percent), Georgians’ interest in basic quality-of-life issues, such as job creation and better access to health care, eclipses concerns about whether the elections will be fair, according to a June survey by the National Democratic Institute, a Washington, DC-based non-governmental organization monitoring the 2012 vote.

Aware of that focus, Georgian Dream, the opposition alliance lead by billionaire Bidzina Ivanishvili, has promised to pour a cool 1 billion lari ($600 million) into agriculture, the economic sector in which 55.6 percent of Georgia’s workforce is employed. Georgian Dream representatives also say they would make significant investments into education and healthcare.

The government, for its part, has raised the ante. Earlier in July, Prime Minister Vano Merabishvili announced plans for a four-billion-lari ($2.41 billion) investment in the agricultural sector, as well the creation of a new state ministry for employment and more accessible health insurance.

In the past, the duel over the competing promises would have played out primarily in the Georgian capital, Tbilisi, home to roughly a quarter of the country’s population of 4.6 million. But now, with employment the campaign’s key issue, the fight is moving into Georgia’s poverty-stricken regions, where finding a job often means going to Tbilisi.

“Everywhere around the village there is poverty,” commented Archil Kbilashvili, a Georgian Dream candidate in the central region of Imereti. “You cannot find even five lari ($3.03) to ask from your neighbors.”

In recent weeks, Georgian Dream and President Mikheil Saakashvili’s United National Movement (UNM) have staged rallies, pressed the flesh or, in the president’s case, opened medical clinics in villages and towns that, in campaigns past, would have received only pro-forma attention.

TV viewers outside Tbilisi used to watch campaign events “happening in the center of the capital,” said Giorgi Margvelashvili, a political scientist at the Georgian Institute for Public Affairs in Tbilisi. “Now, everything is happening in the small town halls. Now, they are watching themselves.”

What difference that will make for either side’s chances at the polls is unclear. Central Election Commission data about the number of registered voters outside of Tbilisi was not immediately available.

A survey of 6,299 Georgian voters nationwide for the National Democratic Institute indicates many Georgians are split between the promises of the UNM and Georgian Dream. On questions of job growth and agriculture, the two sides are running nearly neck and neck, with 28 percent of respondents giving the nod to the UNM on jobs and 24 percent to Georgian Dream. On agriculture, the breakdown was 28 percent versus 24 percent. The survey had a margin of error of plus/minus 2 percent.

Out of the three issues, only on healthcare did the UNM post a clear lead, winning the trust of 30 percent of respondents versus 20 percent for Georgian Dream.

The survey showed a clear lead for Saakashvili’s party over Georgian Dream (36 percent versus 18 percent), but there were also signs that the public opinion could shift. The UNM’s rating has experienced an 11-percentage-point slide since February, while Georgian Dream has gained 8 percentage points.

Giorgi Kandelaki, a UNM parliamentarian and deputy chairperson of parliament’s Foreign Relations Committee argues that voters’ ultimate decision will be based on the incumbent UNM government’s track record in building a functional state by fighting corruption and developing infrastructure. “It is not just life; it is the ability of the state to actually function,” Kandelaki said. “If the state is failing, if the state is comprehensively merged with organized crime, we can’t really speak about making agriculture work on exports and development of storage facilities for the export of kiwi or something.”

Kandelaki argued that while the two camps may address the same issues, their programs are “worlds apart.” Georgian Dream promises a universal healthcare fund, he noted, but the National Movement calls for “stimulating” private competition in the healthcare and insurance industries. “Georgian voters are wise and they have a perfect understanding about the context,” he added. [Editor’s Note: Giorgi Kandelaki formerly served as an editorial associate for EurasiaNet.org.]

Ultimately, the 2012 parliamentary election campaign, regardless of which side wins, may have a lasting effect on Georgian politics, said Margvelashvili, the political scientist. “Finally, the capital acknowledges that it is not the only center where politics are made.”