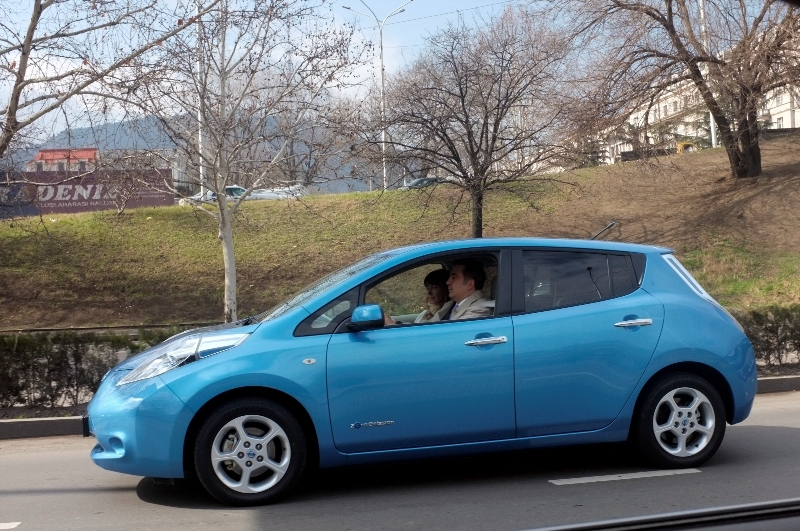 Georgian President Mikheil Saakashvili took the wheel for a February 27 trip to the Tbilisi airport. Photo: Office of the President of the Republic of Georgia

With all the dramatic flair of a silent movie star, Georgian President Mikheil Saakashvili sent his security detail home the other day, later saying he needs no bodyguard other than his Dutch-born wife, Sandra Roelofs. He then sat down in his tiny blue electric car and drove himself and the First Lady to the Tbilisi airport for an official trip to Baku.

But after coming back from Azerbaijan, the president found a convoy of security vehicles waiting for him at the airport, as if they were never dismissed. The big black SUVs, dispatched by the government, followed home the little presidential Nissan Leaf, which resolutely ignored them.

President Saakashvili and Prime Minister Bidzina Ivanishvili have fought over speeches, arrests, constitutional changes and more. So, it should come as no surprise that they are now fighting over whether or not the president will have bodyguards.

Since last year's parliamentary elections, most components of the presidential security service -- like most of Georgia's government agencies -- have been taken over by the prime minister’s office. In turn, the president claims that the prime minister's people have been bringing pressure to bear on his personal bodyguards, so that he was compelled to relinquish the reported 350-person team altogether.

But as Saakashvili turns the argument into a publicity stunt, Ivanishvili seems to have decided to keep the president in a security service's straitjacket against his will. Yet, security threats or no, don't look for the president to comply. He called the SUVs lined up to protect him "a circus" staged by the prime minister.

Ivanishvili would be better advised to save for the poor the money spent on filling up the convoy's tanks, the president added, in a  populist rebuff.

And so goes the new episode in the tele-drama of petty poking that Georgians call cohabitation.

Watching his powers diminish, supporters arrested and state prosecutors getting at his neck, Saakashvili, aside from PR, still does have one influential lever at his disposal – that of trash-talking the prime minister outside of Georgia.

In Azerbaijan, Saakashvili spoke of a Russian threat. He said the Kremlin is trying to gobble up the region by sponsoring separatism in Georgia, stirring up the Azerbaijani Diaspora against President Ilham Aliyev in Azerbaijan, and attempting to buy key economic sectors in both countries. Saakashvili claimed that Ivanishvili’s policies are helping Moscow achieve its ends in the South Caucasus.

After coming back to Tbilisi, Saakashvili was supposed to meet Ivanishvili. But the president did not drive his blue car up to the prime minister’s residence today. In Ivanishvili’s words, Saakashvili said he was going on some trip and did not have time to meet.