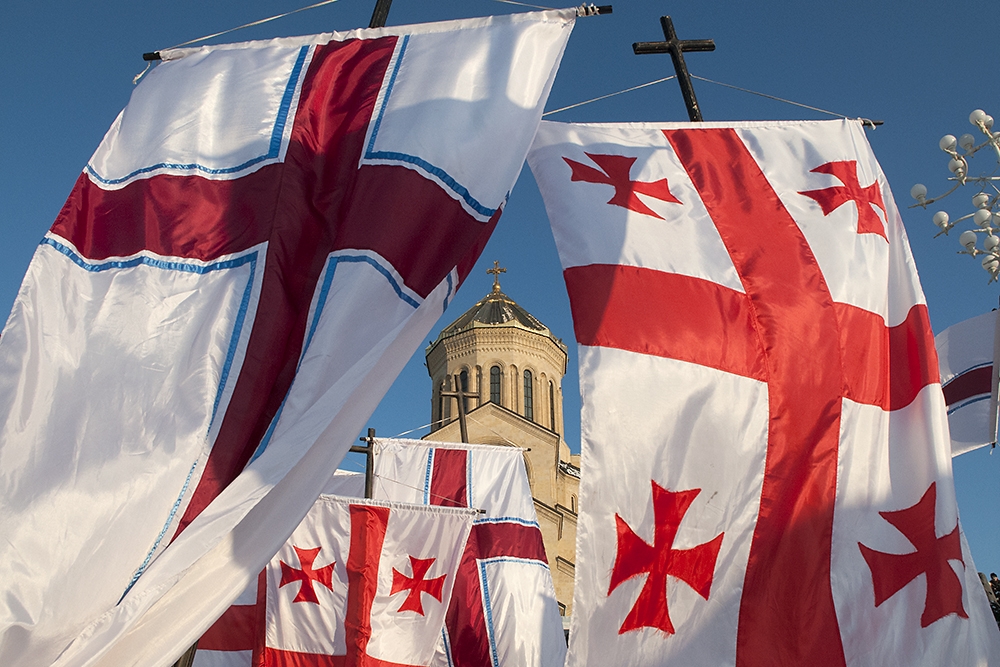 Carrying icons, crosses, banners and flags, thousands of Georgians march through the streets of Tbilisi in January 2008, ending the annual Alilo religious procession at the Cathedral of the Holy Trinity. The Georgian Orthodox Church is the most highly trusted institution in the South Caucasus country. (Photo: Dean C.K. Cox)

Many proponents of European Union integration tend to see the Georgian Orthodox Church as an obstacle on Georgia’s path to Brussels. But a new initiative in Tbilisi aims to make the Church a firm supporter of closer EU ties.

Over 80 percent of Georgia’s 4.5 million citizens are Orthodox Christian, and public opinion polls routinely rank the Church as the country’s most trusted public institution.

Officially, the Church, which depends on government funding, is supportive of Georgia’s efforts to draw closer to the EU. Even so, many priests and parishioners worry EU integration efforts are compromising their faith, believing that the value system advanced by Brussels is at odds with Georgia’s relatively conservative social mores. They also worry that stronger EU ties could erode Georgia’s national identity.

In one prominent example of the Orthodox faithful’s wariness, Orthodox priests led a counter-demonstration to a LGBT rally in 2013. Dozens were injured in an ensuing riot.

“Part of the congregation thinks Europe, the West generally, is a threat to Georgia’s original culture and traditions,” explained Grigol (Berbichashvili), the metropolitan of the western diocese of Poti and Khobi, an area with about 54,000 residents. “Hard work is needed to overcome this environment.”

Skepticism about the EU seems to be strengthening. Results from an October 2015 survey for the Washington, DC-based National Democratic Institute showed 61 percent of respondents favored Georgia’s accession to the EU. But that figure marked a drop of 17 percentage points in comparison to those backing EU membership in 2014. At the same time, the 2015 poll showed the number wanting Georgia to ditch the EU for closer ties with Russia rising by 11 percent.

Some critics blame the Church for encouraging such views. But representatives of the Center for Development and Democracy (CDD), a Tbilisi-based non-governmental organization, believe the Church can become an important partner in fostering understanding and greater support for EU integration. Some point to Ukraine as an example: there, Orthodox Church loyal to the Kyiv Patriarchate is a strong backer of Ukraine’s struggling effort to move westward. Accordingly, the CDD has developed a training project that concentrates on raising awareness about the EU integration process in Georgia among parish-level priests, along with church-affiliated educators.

There are supporters of EU integration within Georgia’s Patriarchate, the Church’s governing body. Relations with the EU are “really useful for our country,” Metropolitan Ioane (Gamrekeli) of Rustavi and Marneuli, director of the Patriarchate’s Education Center, an outreach office, stated in a promotional video, but “we need correct, objective information for having adequate relations.”

Since late 2014, approximately 1,700 Georgian Orthodox priests, as well as teachers and students from educational institutions affiliated with the Patriarchate, have attended 20 briefings and training sessions that highlight the benefits of EU association, including visa-free travel to the EU. Sessions also focus on the history of EU-Georgia relations, mutual obligations under Georgia’s EU Association Agreement and the relationship between EU states and religious organizations.

The CDD trainings are organized in conjunction with the Patriarchate’s Education Center, and are financed by the embassies of the United Kingdom and the Netherlands. “The Georgian Orthodox Church is a very important player in … Georgian society and we have never had projects targeting representatives of this community,” the Netherlands’ deputy head of mission to Georgia, Floor Nuiten-Elzinga, wrote in emailed comments to EurasiaNet.org.

Greater awareness about the benefits of closer EU ties, the thinking goes, can enable participating priests to better lead debates among members of their respective congregations. Clergy are particularly influential in rural Georgia, where they are often locals’ main source of information. Sermons, confessions, group pilgrimages, and social events such as weddings and funerals all provide opportunities for priests to share their knowledge.

“If it is about respecting our culture and uniqueness, given we also respect theirs, what is there to be scared of?” he said, referring to the EU.

Session speaker Mikheil Mirziashvili, a project manager at the Crisis Management Initiative, a Finnish conflict-resolution NGO, said the trainings have been successful in dispelling misconceptions. “After explaining that such [sensitive] issues as same-sex marriage, for example, are the sovereign responsibility of any country [to decide], things get clear and [participants] even ask ‘If that [explanation] was so easy, why did nobody explain it before?’”

The CDD selects locations for trainings at random, contacting the relevant bishop and proposing the gathering. It has conducted information sessions in 14 of the Church’s 49 dioceses, and never received a refusal, said CDD head Ketevan Chachava. “On the contrary, some of the diocese heads contacted [the Patriarchate] and complained about why his diocese was left out. And they invited us,” Chachava said.

As an additional step in raising awareness, CDD representatives are hoping money can be raised for an initiative that would allow the Patriarchate’s TV channel Ertsulovneba (Unanimity) to broadcast a program dedicated to EU-related topics.

Many Georgian civil-rights advocates, journalists and intellectuals continue to doubt the Church’s commitment to EU integration. They note that the boundary between state and church is narrowing, to the detriment of rule of law. They also point to criticism of Western values aired by some members of the Holy Synod, the Church’s general council.

But political scientist Kornely Kakachia, director of the Georgian Institute of Politics in Tbilisi, believes that not all of the Church’s representatives should be painted with the same brush.

“It’s very important not to engage in a zero-sum game,” Kakachia stressed.

Measuring the program’s ultimate impact could take a few years. But for Metropolitan Grigol of Poti and Khobi such “practical steps” are the key to ensuring that Georgia “does not turn back from the [European] future of which our ancestors were dreaming.”