Young clubbers occupied central Tbilisi to defend their right to party, squaring off against ultranationalists. 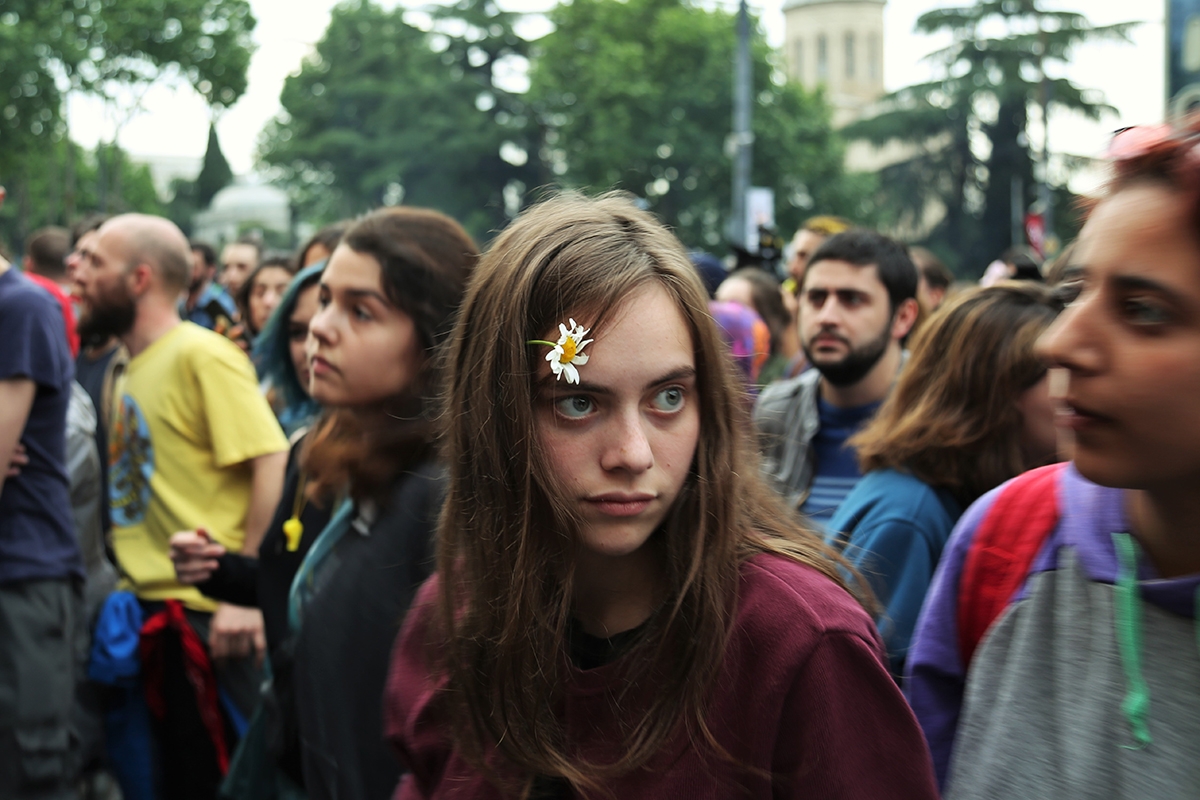 Outraged by the police raids on nightclubs, thousands of clubbers and liberal activists took control of the road outside parliament and held an impromptu dance club May 12 and 13. Some wore chamomile flowers in their hair. (Giorgi Lomsadze)

Georgia's fierce culture wars escalated over the weekend after a heavy-handed police raid on a nightclub was followed by a tense standoff between defenders of the capital’s lively, libertine nightlife and radical far-right groups.

A massive police presence barely managed to keep the peace between the two competing demonstrations in central Tbilisi on May 13, as protests against the anti-drug raids on two nightclubs exploded into a larger conflict about personal freedom and national identity.

“We were on the cusp of civil confrontation,” President Giorgi Margvelashvili said at a press conference the following day.

At the center of the conflict was the nightclub Bassiani, which has gained international renown as one of the top clubs in Europe and one of the main draws to the city for hip young tourists from around the world.

In Georgia, Bassiani has been in the vanguard of cultural revolution, helping create an underground of cosmopolitan and progressive youth opposed to the often nationalistic, xenophobic and homophobic environment in the rest of the country. Emphasizing its role in Georgia's culture wars, the club even borrows its name from a famous 13th-century battle.

Over the last several years, a cultural gap has been widening among Georgians. In a relatively short period of time, pockets of the country have dramatically changed: Tbilisi's rapidly developing center is now a playground for liberal young people, with attitudes on sexuality, gender roles, and even diet that are far different than that of the mainstream. Immigrants, including many darker-skinned people from the Middle East, South Asia, or Africa, are now a common sight in Tbilisi. And a growing movement seeks the liberalization of drug laws, albeit focused on marijuana rather than harder club drugs.

This has made some conservative Georgians uneasy, and has led to a backlash, including from a growing militant far-right movement.
The latest confrontation began following a string of deaths of clubgoers, blamed on overdoses of recreational mephedrone-based drugs, earlier in the month.
Police responded in the wee hours of May 12 by storming Bassiani and another club, Café Gallery, dragging partiers out and detaining several. “We ... have 20 video clips of drug sales in clubs. We were forced to raid the clubs,” said Interior Minister Giorgi Gakharia.

Many criticized the crackdown as a publicity stunt and it later transpired that eight people arrested for possession of drugs were detained outside the club premises, apparently rendering the heavy-handed raids unnecessary.

Outraged by the raids, thousands of clubbers occupied the street in front of parliament on Saturday afternoon. Dancing to electronic music blasting from large speakers, the partier-protesters turned downtown into a dance club for the rest of the weekend. Demanding the resignations of the interior and prime ministers, the protesters held posters reading “Dancing Is Not a Crime,” “Don’t Beat Me, Dance With Me,” and “If We Can’t Go to Bassiani, Bassiani Will Come to Us.”

Demonstration proceeds in front of the Georgian Parliament where protesters dance to electronic music after yesterday's raid on nightclubs #Bassiani #tbilisi pic.twitter.com/mgBAQhOatf

“Our problem is with the police state… that we have been living in for years and the May 12 raids were another testimony of it,” Beka Tsikarishvili, one of the organizers of the rally who leads the White Noise Movement, a grass-roots coalition pushing for liberalized drug policy, told the crowd.

Things went south on Sunday, when the clubs' defenders kept up their protests and ultranationalist groups Georgian March and Georgia Idea gathered nearby.

Far-right counter-rally gathered near 9 April Square after being prevented by police from going to the parliament where #Bassiani #CafeGallery protest is being held #Tbilisi pic.twitter.com/AQylLaTIts

The rival camps' fashions were as far apart as their ideologies, with colorful outfits and piercings dominating one group and close cropped heads the other. Shouting verbal abuse and homophobic slurs, the far-right youth repeatedly tried to break through police cordons as the other side danced and played electronic music in defiance.

“Bassaini [expletive] off!” some in the nationalist camp screamed. “They are just a bunch of drug dealers, sluts and homosexuals,” one far-right activist wearing a mask told Eurasianet at the event.

Rows of regular and riot police formed a human wall between the two rallies on central Rustaveli Avenue. Police used city buses to form additional barriers and had water cannon trucks at the ready in case the confrontation got violent.

Both sides stood their ground until Gakharia, the interior minister, showed up after midnight to apologize for the excessive force used in the club raids.

“Let me begin with apologies,” Gakharia said, promoting peals of applause from one rally and catcalls from the other. “I apologize not just on my personal behalf, but on behalf of any interior ministry officials who may have aggravated you or whose actions put your safety at risk,” he said, offering to sit down with protesters to discuss ways to revise the country's punitive policies on drug use.

The ravers agreed to disperse but police struggled to secure their safe exit. The radical groups became increasingly violent, clashing with police and screaming threats.

Order was eventually restored but questions remain about how to deal with drug use – parliament members promised to produce new drug policy legislation in two weeks – and the growing cultural divide.