Police dispersed another demonstration in Tbilisi in what is turning into a contest of endurance between government and protesters in Georgia. 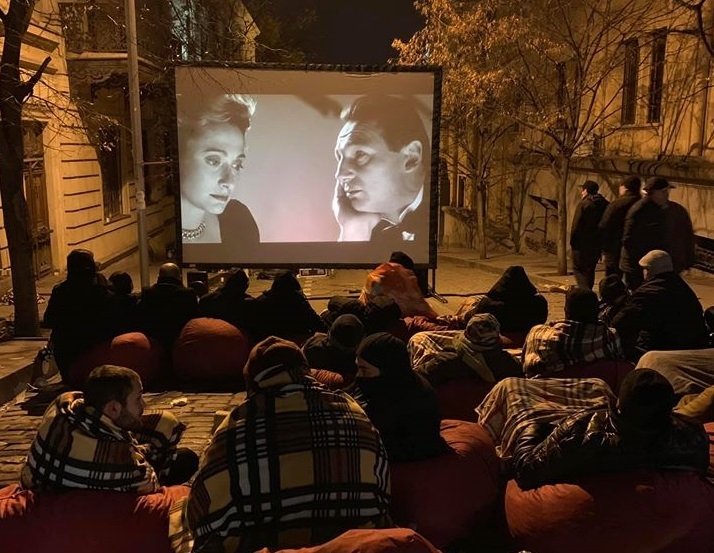 Georgian protesters watch the film Schindler's List as they spent the night protesting in front of the country's parliament building. (photo courtesy of Salome Barker)

For the second time in a week riot police have cracked down on protesters in Tbilisi, using water cannons early on November 26 to break up the opposition’s attempts to blockade Georgia’s parliament.

The crackdown followed the previous evening’s battles between regular police force and protesters over firewood and steel barrels, as demonstrators were trying to build fires and stay warm on the streets as temperatures dropped to freezing. Police checked vehicles in the area for firewood, and tried to seize logs and steel barrels from the protesters.

In one such battle, police engaged in a protracted tug-of-war over a barrel with Elene Khoshtaria, a member of European Georgian opposition group. “You have no right to take this away from me. This is my property and I have the right to carry it wherever I want,” Khoshatia shouted at the officers, calling them “highway robbers” and “serfs” of Bidzina Ivanishvili, the billionaire leader of the ruling Georgian Dream party and the primary target of protesters’ ire. Other women hid logs in their handbags to sneak them into the rally.

The protesters filled Tbilisi’s central Rustaveli Avenue, as they had the week before, blocking all entrances to the parliament building and demanding the reform of an election law that currently gives a leg up to Ivanishvili’s party.

One group of protesters, getting word that President Salome Zourabichivili was dining in a nearby trendy restaurant as protesters were gathering in the early evening, headed there to heckle her. Accusing the president of being a mere pawn of Ivanishvili, the protesters presented her with a traditional pickled appetizer of a local vegetable, jonjoli, a word also colloquially used to describe a useless person.

Protesters stayed all night at the parliament building, making speeches, dancing, and watching movies using a portable screen and projector. But at five in the morning, riot police moved in with water cannons to clear the area. Twenty-eight arrests were made and five were hospitalized during the crackdown. One 48-year-old man suffered an eye injury, but was back to the protests by noon.

Georgian Dream members still managed to convene for a session in the morning, but they were alone in the main hall as all opposition parties are boycotting the assembly in protest against its failure to change the election law.

Speaker of Parliament Archil Talakvadze appealed to the opposition to take their case from the streets into the halls of parliament. “I call on the opposition to return to the normal political process,” he said. “Say the things you have to say in the parliament, at committee meetings and plenary sessions […] this is what parliament is for.”

Opposition parties say there is nothing to discuss until Georgia switches its election system to a proportional one, a reform that Ivanishvili promised to make earlier this year. But a bill to enact the reform failed to pass on November 14; the opposition argues that Ivanishvili clumsily staged a “rebellion” by some party members in a bid to avoid personal responsibility for backing down on his promise. Protests, led by youth groups and joined by the opposition parties, have continued on-and-off since then.

Despite the resulting outburst of public anger, Georgian Dream has doubled down, with some of its members now proposing a sort of anti-reform: switching to an entirely majoritarian system. Georgia currently uses a mixed proportional-majoritarian system, the majoritarian element of which has been blamed for giving the ruling party a disproportionately large number of seats in the legislature.

Tbilisi Mayor Kakha Kaladze, Georgian Dream’s secretary general, said on November 25 that the parliament will no longer discuss the reform and that next year’s parliamentary elections will be conducted under the current law. “The topic is closed,” Kaladze told a press conference. Threatening to act strictly against any attempts to disrupt parliament’s work, Kaladze offered to put the idea of proportional system to a referendum during next year’s elections. Protesters have dismissed the offer and say they will keep the pressure on until the government itself passes the reform.

Meanwhile, the president’s dinner continued to spur debate the day after, much of it centered around her choice of restaurant, Salobie Bia. Salobie translates literally as “beanery,” and Georgian Dream members defended Zourabichivili by arguing that eating beans was not a crime, though some allowed that it was poor form to have dinner in close vicinity of the protest site. Georgian Dream member Irakli Kobakhidze said that it is the opposition that is “in the beanery,” meaning in the wrong place.

The owner of Salobie Bia also weighed in. “The moment I left town, Salome the bogeyman visited our Salobie,” owner Giorgi Iosava wrote in a Facebook post and expressed “full solidarity” with protesters.