Georgia recommended for EU candidacy, but with conditions

The news from Brussels represented a significant step forward for Georgia’s European aspirations, but Ukraine and Moldova were offered quicker paths toward EU accession. 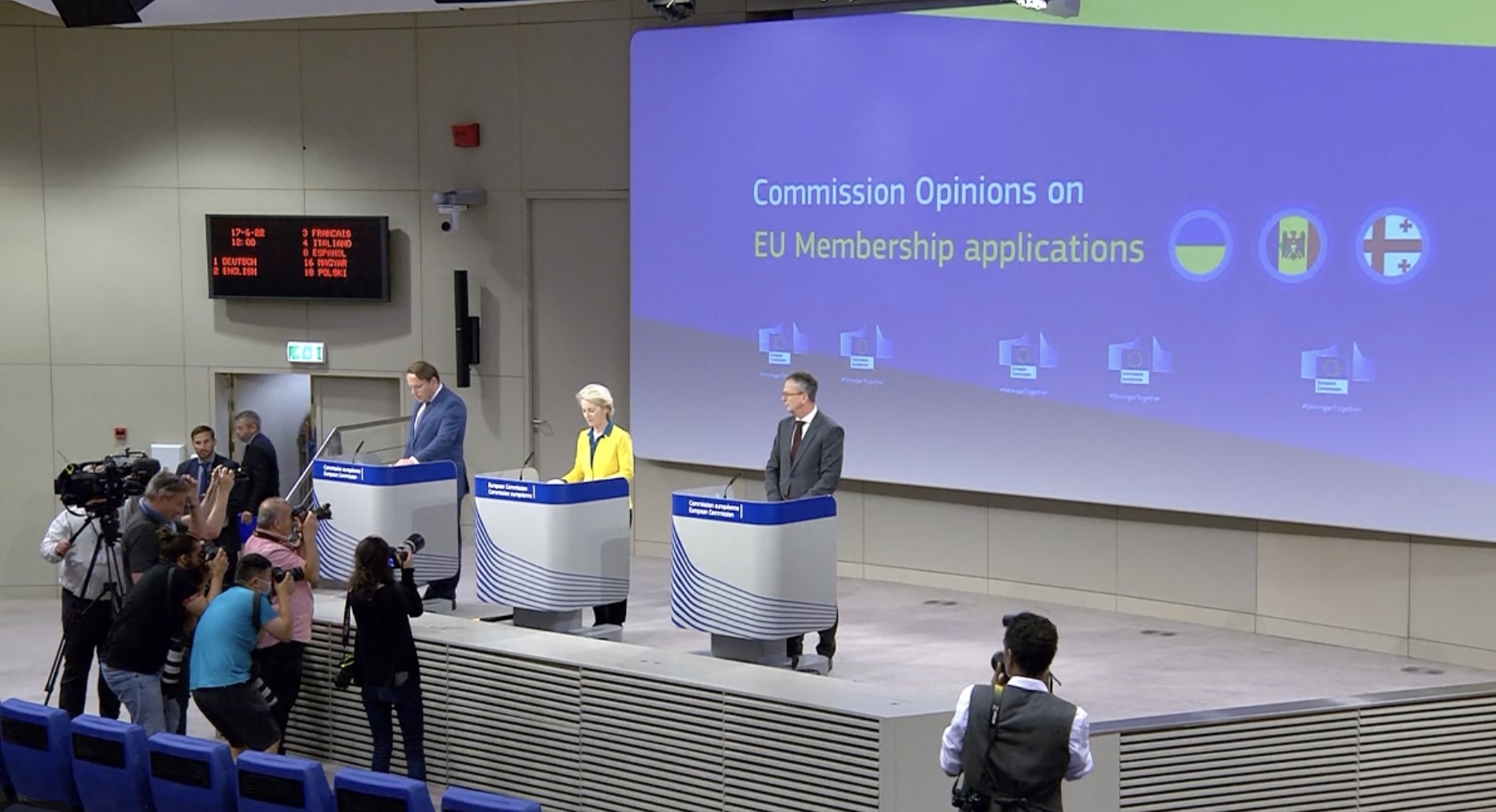 Leaders of the European Commission announce their recommendations for EU candidacy for Georgia, Moldova, and Ukraine. (photo: EC)

The European Commission has recommended that Georgia gain a “European perspective” and be admitted as a formal candidate for European Union membership once it fulfills certain conditions.

At the same time, the commission recommended fellow applicants Ukraine and Moldova be granted formal candidate status immediately, underscoring how political polarization and democratic backsliding in recent years have set Georgia back on its European aspirations.

The commission, the EU’s executive body, said in a much-awaited June 17 opinion that Georgia first should fulfill a number of political and policy conditions before it can be granted candidate status.

“It is a huge step forward for Georgia,” said Ursula von der Leyen, the commission’s president, in a press briefing. “To get the European perspective, this is a big achievement.”

Georgian government and ruling party officials emphasized the positive in the announcement.

“Georgia has for many years awaited official recognition of the European perspective from the EU,” Irakli Kobakhidze, chair of the ruling Georgian Dream party, told reporters. “We are glad that the European Commission today officially recognized this perspective and offered us a concrete roadmap to receive a candidate status.”

But to get candidate status, Georgia will have to fulfill a number of conditions, including reducing political polarization, implementing reforms to strengthen the independence of the judicial system, and bolstering anti-corruption efforts. The commission now “will monitor Georgia's progress to address these priorities and report on them by the end of 2022.”

“The door is wide open. It is up to Georgia now to take the necessary steps to move forward,” von der Leyen said. “The sooner you deliver, the sooner there’s progress and therefore it is in the hands of Georgia to really speed up and be clear and move forward through the open door.”

The commission’s opinion is expected to influence, but not necessarily determine, the final decision to be taken by the leaders of EU countries at a June 23-24 summit.

But it is the most decisive signal yet from European officials putting Georgia on a lower tier than the other two applicants.

While that came as a disappointment to Georgians – more than 80 percent of whom back EU membership – it was not a surprise, coming as it did after a series of discouraging reports from Brussels.

Ukraine, Georgia and Moldova, which had sought to bind their joint European aspirations as an “EU Associated Trio,” all applied for membership shortly after the Russian invasion of Ukraine. The war seemed to have shifted thinking in Brussels about whether the three former Soviet countries were ready to start the accession process, and Georgian officials and analysts identified apparent “signals” from European officials encouraging the country to formally start the process.

But Georgia’s application nevertheless quickly ran into trouble. While the country was once a frontrunner in implementing EU-recommended reforms, in recent years it has seen some democratic backsliding and exacerbated political polarization which appears to have damaged its standing in Europe.

Most recently, French President Emmanuel Macron said on June 15 that Georgia was in “a different place geopolitically” than Ukraine and Moldova. And German Chancellor Olaf Scholz did not mention Georgia when he publicly backed candidate status for the two other applicants on a June 16 visit to Kyiv.

As bad signs began to emerge from Brussels, the Georgian government’s confrontational rhetoric and defensive reactions likely did it no favors. President Salome Zourabichvili tried days ahead of the announcement to stanch the bleeding by calling the public and politicians to a pro-Europe rally in Tbilisi on June 16, but turnout was poor. Another pro-Europe rally, endorsed by opposition parties, is scheduled for June 20.

Kobakhidze seized on Macron’s words to try to suggest that the Georgian government was not to blame for ending up behind Ukraine and Moldova.

While Georgia is ahead of those two countries “by all measurable parameters,” it lost out because “as European leaders have directly implied in advance, geographical location also stood in the way of Georgia receiving a candidate status,” Kobakhidze said.

Others, however, said the government was to blame.

“Sadly, this is another missed opportunity that Georgia had following the Ukraine developments,” Kornely Kakachia, the director of the Tbilisi think tank Georgian Institute of Politics, told Interpressnews. “Until recently, we were considered as one of the frontrunners, but as a result of the past years’ policies, we have turned into one of the laggards of the trio.”

Kakachia said that the “European perspective” was something the EU would have granted any other country. “This was the minimum which Europe could not have refused us.”

“Now we have to watch the reaction of the authorities, how they will receive this decision,” he added. “Judging by the nature of this regime, the government will probably continue the same politics as before.”

Note: This piece has been updated with comments from Irakli Kobakhidze and Kornely Kakachia.