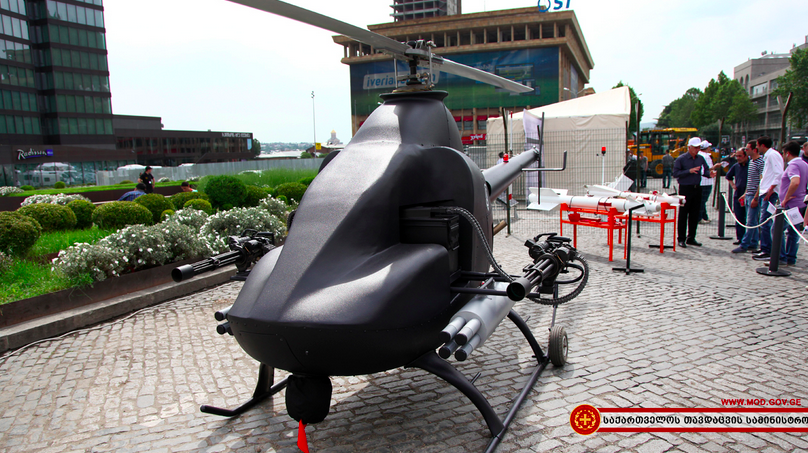 Georgia has rolled out a new, domestically produced armed drone, a substantial step forward for the country's growing defense industry.

The as-yet-unnamed unmanned aerial vehicle was produced by Georgian state defense manufacturer Delta, and was displayed in Tbilisi as part of the country's independence day celebrations.

Georgia has had a checkered history with drones. It bought some from Israel in 2007, then discovered that Israel had given the codes needed to control the aircraft to the very enemy Georgia is trying to arm itself against: Russia.

Then in 2012 Georgia showed off a new military UAV, announcing with great fanfare that it was domestically produced. “When you make procurement from abroad a seller may not give you a full technology or may share technology [bought] by you to your adversary,” then-president Mikheil Saakashvili said at a presentation of the drone. “No one will share this [pointing to the Georgian-made drone] with others; it’s ours… We no longer depend on others.” But it then quickly emerged that the drone was in fact a near-copy of an Estonian model.

This time, the fanfare isn't as great but it appears to be a more impressive accomplishment. "It looks like they made this one from scratch," Michael Blades, a military UAV analyst at consulting firm Frost & Sullivan, told The Bug Pit. "Although several foreign-produced parts were used to create the platform, Delta considers it a unique, all-Georgian product by its design and concept," reported Georgian news site Agenda.ge.

In design and specifications the Georgian drone most closely resembles Northrop Grumman's MQ-8B Fire Scout, developed for the U.S. Navy, Blades said. But the U.S. Navy didn't arm the MQ-8B, instead opting for a larger drone for its armed missions.

The Georgian drone also has a significantly shorter range than the MQ-8B: two hours as compared to six hours. It has a maximum speed of 190 km/hour, a maximum altitude of 3,000 meters, and weighs about 700 kg with a full fuel tank. It's armed with a mini-gun and eight air-to-surface missiles.

While many comparable rotor-wing UAVs are based on already-existing manned helicopters, this one doesn't appear to be, Blades said. "This looks like it was built from the ground up. It's relatively small so it's not that complicated of an undertaking," he added.

While the drone now is known simply as the "multifunctional unmanned aerial vehicle," it will get a proper designation soon, and will apparently be named by some sort of referendum: "The Georgian people will soon be able to give a nickname to the aircraft," Agenda reported.

Delta displayed a total of 15 types of new equipment that it has developed, including several varieties of armored vehicles. One of those vehicles was reportedly a finalist for a tender for the Saudi Arabia military.