Georgia: A Ruling ‘Super Party,’ but No Super-Sized Democracy? 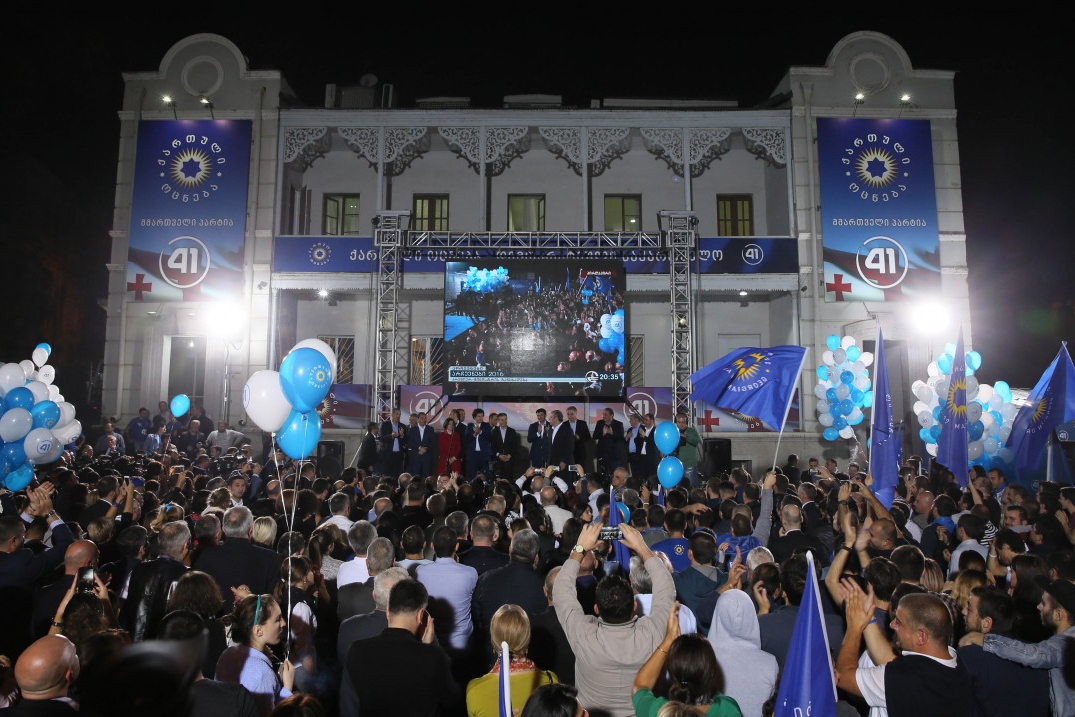 “Today begins a whole new phase of progress and we are ready to take decisive steps to take the country forward,” Prime Minister Giorgi Kvirikashvili, chairperson of the Georgian Dream, said in a televised statement on October 31.

The Georgian Dream, which has governed Georgia since 2012, now controls 76 percent of the 150-member parliament. Its candidates picked up 48 of the 50 districts that had produced no clear winners in the first round of voting on October 8 and which were recontested in this runoff.

Failing to win any seats in the runoff votes, the party of former President Mikheil Saakashvili, the staunchly pro-Western United National Movement (UNM), took a distant second place with just 27 parliamentary seats, based on preliminary results.

The UNM accepted the results philosophically. “What doesn’t kill you makes you stronger,” the UNM’s chairperson, Davit Bakradze, told reporters.

The UNM vowed to do all it can to prevent the Georgian Dream from monopolizing Georgia’s political system, but Bakradze admitted that the party’s MPs cannot do much.

In a last-ditch effort to prevent single-party dominance of parliament, a group of public figures including writers, artists and rights advocates issued a public appeal urging a vote against the Georgian Dream in the election’s second round, but without results.

Local observers noted irregularities, but not on a scale to call the results into question.

As a result, the Georgian Dream now holds the critical mass needed to make constitutional changes and pass laws unilaterally. For the past four years, the UNM’s 43-percent control of parliament has effectively blocked such moves. But with the UNM now having lost most of its former seats, that check no longer exists.

Nor can it look for alliances with other MPs. The only other group that gained seats in parliament (all of six) is the Patriots’ Alliance of Georgia, a nationalist-inclined coalition, frequently accused of shilling for Moscow and which has said it would not form a coalition with the UNM.

Other opposition representatives are even scarcer. The conservative Industrialist Party won one regional runoff seat in the central district of Khashuri, while ex-Foreign Minister Salome Zurabishvili, running as an independent, gained a seat in Tbilisi.

However, little suggests that most Georgian voters wanted to give the Georgian Dream super party control of parliament. The party won 48.68 percent of the national vote, far less than the almost 55 percent its coalition received four years ago.

This may be partly explained by the drop in voter turnout this year – just over half of the country’s more than 3.47 million registered voters turned out for the October 8 election; that figure sagged to 37.5 percent for the runoff. By comparison, in 2012, 60 percent of voters went to the polls.

Multiple parties running for seats helped further split the vote this year, but, ultimately, to explain the evolution of a Georgian Dream super party, some observers point to Georgia’s electoral system itself.

Under Georgia’s two-tier election system, voters select both a party and an individual candidate to represent their districts in parliament. Seventy-seven of the seats are distributed proportionally among parties according to the size of the national vote they received. The remaining 73 seats are taken by individual candidates representing particular districts.

“Owing to the existing system, the share of seats that parties received widely does not correspond with their share of national support,” said Mikheil Benidze, executive director of the International Society for Fair Elections and Democracy, an election watchdog group.

In part, the Georgian Dream’s former coalition allies, which failed to clear the five-percent barrier to enter parliament, contributed to the result, as their share of the national proportional vote was redistributed among the parties which did make it into parliament.

That makes for seats that do not necessarily reflect the national vote. Even if the proportional vote “results in a party having less than six seats, they get six seats anyways, to allow the party to form a faction in the parliament,” commented Dustin Gilbreath, a policy analyst with the Caucasus Resource Research Centers, a data-analysis think-tank.

Some observers see winning seats for individual candidates as an “extra” on top of this proportional-vote tally that can further skew the results. In this case, Georgian Dream won 97 percent of individual mandate races to substantially pad their margin from the party vote.

This mixed system may be intended to encourage diversity, but it may be having the opposite effect. In the first post-Soviet parliamentary election, in 1992, 24 parties entered the 235-seat parliament – some with just a single seat. “It was a strange election, any party that bothered to run ended up in the parliament,” said Davit Sichinava, an independent election analyst.

Uniformity became more the norm after the 2003 Rose Revolution. The UNM dominated the legislature until 2012, winning a constitutional majority in 2008 – a fact that the party often overlooks now that it is in the opposition.

Critics have called for modifying Georgia’s electoral system to ensure that parliamentary representation more directly correlates to parties’ proportional support among voters but, so far, no sign of immediate change is in sight.

The Georgian Dream has promised to amend the existing system by 2020, but before that it has other pressing constitutional changes to make – such as having parliament elect the president and constitutionally defining marriage as a union between a man and a woman.