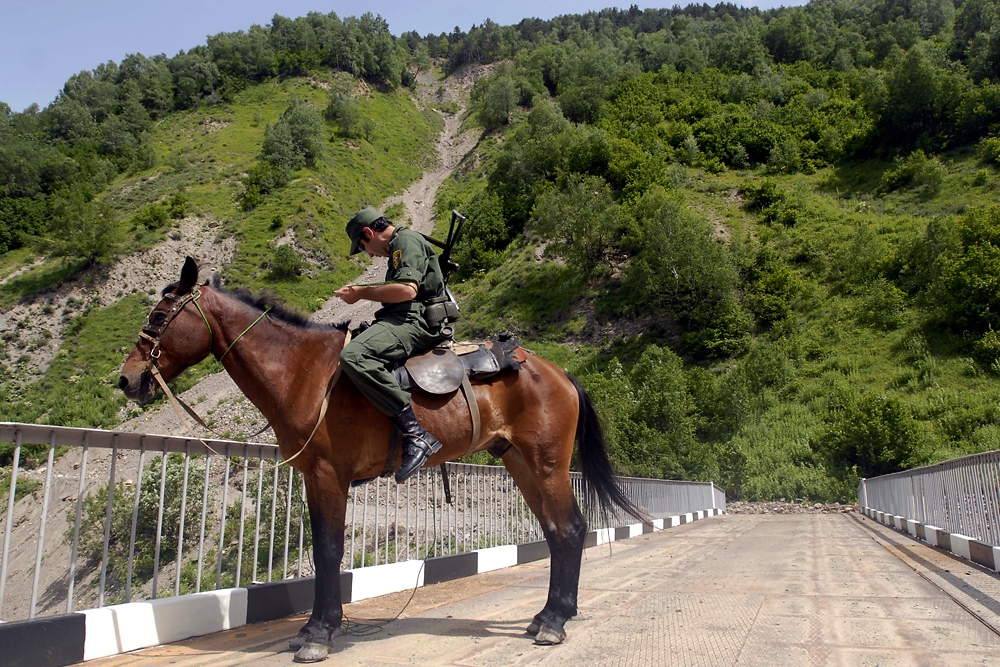 The Greater Caucasus Mountains form a natural buffer between Russia and Georgia. But in the absence of a border agreement between the two states, even some of the highest peaks in Europe are not enough to protect Georgia from the risk of Russian territorial nibbling, analysts say.

The 894-kilometer-long Georgian-Russian border is largely delineated – meaning there is a line on a map, based on Soviet-era documents, that defines it. But that line has not been confirmed by both sides. Before the 2008 war between the two states, 86 percent of the border had been agreed upon, according to Georgia’s Ministry of Foreign Affairs. The topic has not been addressed since then.

With both sides now divided over the status of the breakaway regions of Abkhazia and South Ossetia – Russia recognizes them as independent states; Tbilisi does not – further discussion in the near future is unlikely.

Shota Utiashvili, the former head of the Interior Ministry’s Analytical Department and currently an analyst at the Free University’s Tbilisi Center for Policy Analysis, noted that over the past two years Russian forces within South Ossetia have taken over hundreds of meters of land, at times dividing Georgian villages in half. He called the Russian encroachment a “danger.”

“[T]hey are moving this [administrative border line] to basically wherever they please, and they are telling Georgia … ‘Let’s create a border demarcation commission,’” he said, in reference to Russian soldiers’ recent installation of a fence a few hundred meters inside the Tbilisi-controlled region of Shida Kartli.

Meanwhile, Tbilisi State University political scientist Kornely Kakachia described efforts to push the frontier forward as part of a Russian campaign “to somehow propagate the idea that there is a ‘new political reality’ … that there are the two independent states, South Ossetia and Abkhazia.”

The lack of an agreement presents potential problems beyond these two disputed territories. Since the 1991 Soviet collapse, there have been a few border flaps involving the two countries.

In 1997, Russia attempted unsuccessfully to take over Larsi, now the sole functioning Georgian-Russian land border crossing, situated in the northeastern part of the country. A similar unsuccessful Russian push occurred at the Mamisoni Pass, an area to the west where the Georgian-controlled region of Racha runs up against the South Ossetian and Russian frontiers.

In the past, territory near the medieval fortress village of Shatili, several kilometers from Russia’s Chechnya, also has been under question, while locals in the southeastern region of Tusheti, which borders on Chechnya and Dagestan, have raised the alarm at the appearance of Russian border guards near highland villages.

Kakha Kemoklidze, head of the Analytical Department at the Georgian Ministry of Internal Affairs, which oversees Georgia’s border guards, stressed that no major issues exist at present on the Georgian-Russian border. At the same time, he allowed that “particular segments” could be considered “problematic.” He declined to elaborate. Meanwhile, representatives of the border guards did not respond to written requests for details.

Demarcation has been a tricky issue for the formerly Soviet republics. Russia and Ukraine, for example, agreed on their border just three years ago, in 2010. And although Estonia is a member of the European Union, its border with Russia is not yet demarcated. Central Asian frontiers remain in dispute in many places.

For Georgia, the lack of a demarcated border is fraught with risk.

“One never knows how this unfinished business of demarcation/delineation might come out as a new trigger for additional military confrontation … given Russia’s ambitions to stop Georgia’s sovereign development,” said Davit Darchiashvili, deputy chairperson of the Georgian parliament’s Defense Committee. [Editor’s note: Darchiashvili is a former director of the Open Society Georgia Foundation, an entity in the Soros foundations network. EurasiaNet.org operates under the auspices of the Open Society Foundations in New York, a separate entity in the network].

The lack of an officially demarcated frontier means that abandoned, highland villages like Ch’ero and Ints’okhni in Tusheti can end up serving as a de-facto buffer zone for border guards from both sides.

Utiashvili, the former Interior Ministry official, stressed that the countries’ border guards do not “share” the Tusheti villages. A Tbilisi tour company that operates in the region confirmed to EurasiaNet.org that the villages remain under Georgian control.

While reports about Russian border guards allegedly trying to seizing strategic spots along the border have caused stirs before among Georgians, Tbilisi is essentially powerless to prevent such acts, noted political scientists. “How can you … demarcate a border with a power that is a thousand times stronger than you and has a different view than you?” asked Alexander Rondeli, the founder of Tbilisi’s Georgian Foundation for Strategic and International Studies. “It is a big problem, but this problem has to be solved.”

A special commission was created in 2006 to finalize the border agreement, according to the Foreign Ministry. The process is also underway with Armenia and Azerbaijan. Georgia’s only fully demarcated border is with Turkey.

Although problems periodically flare up on the borders with Armenia and Azerbaijan, they are less problematic than the border with Russia, said Darchiashvili.

The Russian-Georgian situation merits close international attention, said Ariel Cohen, a senior research fellow at the Heritage Foundation in Washington, DC. “Borders are only as good as both sides decide to recognize them,” Cohen noted. “If … one of the sides decided to push a border, and the international community does not react … not only does it put in danger the weaker power, it threatens international order in Europe and in the world.”