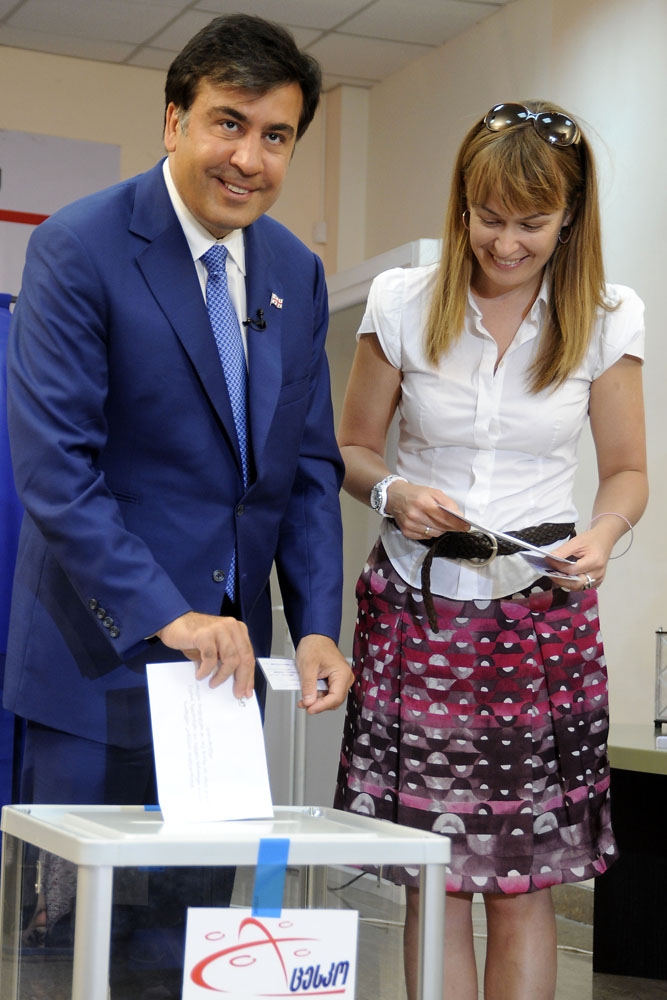 Saakashvili casts his ballot. (Photo: Office of President of Georgia)

Georgia’s May 30 local elections – the first since its defeat in the 2008 war with Russia – have ended with an apparent victory for President Mikheil Saakashvili’s United National Movement. But persistent concerns about abuse of public resources – and an underwhelming turnout in Tbilisi -- have cast a pall on the ruling party’s win.

The most contested battle took place in Tbilisi, which held its first mayoral elections along with the city council (sakrebulo) vote. The current appointed mayor, Gigi Ugulava, a Saakashvili protegé, garnered slightly more than 55 percent of the vote, according to early results.

Ugulava’s strongest competitor, Alasania, a distant second with just over 19 percent of the ballots counted by mid- afternoon on May 31. Only one other of the eight opposition candidates received more than 10 percent of the vote – the Christian Democrats’ Giorgi Chanturia, a former head of the Georgian International Oil Corporation, who had promised sharp cuts in utility fees – although Tbilisi utilities are privately managed -- if elected.

The Central Election Commission (CEC) reported that less than half of Tbilisi’s 981,505 registered voters -- 46.64 percent -- decided to take part in the capital city’s first direct mayoral election. National turnout was put at 49 percent.

Ugulava’s victory had been predicted weeks before the Tbilisi election; a prediction that prompted some Tbilisi voters to say that they had not bothered to vote because they believed their vote would make little difference.

A complete set of preliminary results for the mayoral election are expected by midnight on May 31; national results for town councils should be known by June 2, the CEC said. Official results are not due until June 23.

Political scientist Gia Nodia, a onetime minister of education under Saakashvili, called the lopsided preliminary results a “negative” for the country overall because they demonstrate that the opposition is still unable to compete against the ruling party.

“The negative part is that it showed that [the] elections were not very competitive, which is a problem,” Nodia said.

“On the positive side, there is more or less an assessment that the quality of [the] elections were [sic] higher than before and also, on the opposition side, that radicalism was not rewarded,” he continued. In Georgian political parlance, “radicalism” signifies street protests with calls for the government’s resignation.

Some political scientists, like Giorgi Khutsishvili, believe there is scant chance that any opposition group will protest the election results.

Only if opposition parties believe that voting errors have denied them seats in Tbilisi’s city council would they head to the streets, he predicted. “The thing that causes the temperatures to rise is not the issues, but some arrogant attitude of the authorities toward the opposition,” Khutsishvili said.

While noting that the May 30 vote showed “clear improvements and efforts by the authorities to address problems” during the election campaign, the head of the OSCE’s election observation mission, Ambassador Audrey Glover, told a May 31 press conference that “[o]ne in five counts were assessed as bad or very bad and significant procedural problems were reported from over a quarter of the counts observed.”

Despite a small but substantial stream of complaints and allegations of misconduct from polling stations around the country, local observers like the International Society for Fair Election and Democracy have also praised the authorities for improved management of election day.

Complaints have largely focused on “procedural violations” – a catch-all phrase for problems ranging from minor violations in election protocol to allegations of tampered ballot boxes.

Before the election, complaints zeroed in on instances of alleged government pressure on candidates and abuse of administrative resources.

Media reports about regional voter confusion – some voters reportedly believing that the election was a presidential election or a national election for Ugulava -- reinforced allegations that Saakashvili’s National Movement was using its position to blindside the opposition’s limited campaigning. Campaign posters featuring Saakashvili with Ugulava’s campaign motto (“There is still much to do”) were observed outside polling stations in the regions.

A monitoring report from the Organization for Security and Cooperation in Europe’s Office for Democratic Institutions and Human Rights noted that two of the country’s national TV stations – Rustavi-2 and Imedi – focused heavily on Ugulava. Other monitoring reports cited more balanced TV coverage.

The government refuted allegations that it misused resources or abused election laws to favor of Ugulava, however.

Nonetheless, Ugulava’s slogan has become a staple of comedy shows and, in one case, a beer commercial. A local brewery has started airing ads that play off the ruling party's promise, urging consumers to buy more beer because “There is still much left to drink.”