The government appears wary of provoking Russia’s ire, but to many Georgians their government’s caution amounts to a cowardly abandonment of their Ukrainian allies. 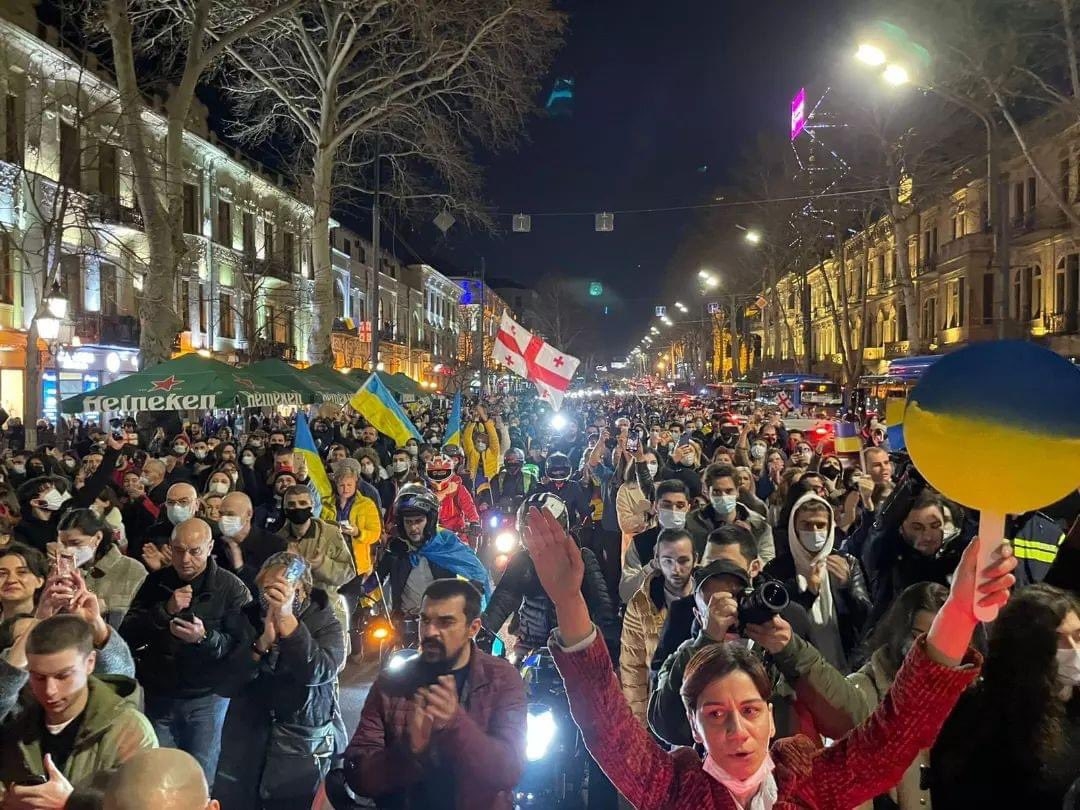 Georgia’s government does not intend to join any sanctions effort against Russia, Prime Minister Irakli Garibashvili has said, holding firm to what he called Tbilisi’s “pragmatic policy” amid a widening international response to Russia’s attack against Ukraine.

“I want to state clearly and unambiguously, considering our national interests and interests of the people, Georgia does not plan to participate in the financial and economic sanctions, as this would only damage our country and populace more,” Garibashvili told reporters on February 25.

In the wake of Russia’s invasion of Ukraine, the United States, European Union, and other countries have been imposing a series of economic sanctions against Moscow.

But Georgia, despite its close ties with the U.S. and Europe, has been taking a more isolationist approach as the crisis over Ukraine has unfolded, apparently unwilling to provoke the Kremlin’s ire while Russia is on the warpath. “I, as [a person] responsible to our country’s population and as the head of government, responsible for domestic as well as foreign policy, will lead on the basis of national interests,” Garibashvili said.

Georgia’s central bank announced that it would be complying with the sanctions imposed against Russia’s VTB Bank, which has a branch in Georgia, and thus would be restricting the bank’s transfers in dollars, Euros, and other currencies. But it added that it would be willing to bail out the bank, if necessary: “In case of need for additional liquidity, the National Bank of Georgia is ready to provide the bank with appropriate financial resources,” it said in a statement, several local media reported. The bank appeared to later amend its statement, removing the reference to the bailout.

Georgia’s decision-making in the current crisis is heavily influenced by the experience of 2008, when it lost a war with Russia over South Ossetia, in circumstances that many Georgians see as uncomfortably comparable to what Ukraine is experiencing today.

The current Georgian government came into power after that war on promises to turn down the temperature with Moscow. They consistently criticize the previous government for starting the war in 2008, giving Russia a pretext to attack by first launching their own assault on Tskhinvali, the de facto capital of South Ossetia. Garibashvili on February 25 repeated that criticism, blaming the government at the time for “stupidly and foolishly or in an anti-state manner giving in to [Russian] provocation.”

While the cautious approach may have helped Georgia avoid further conflicts with Russia, it is now increasingly out of step with a rising anger among Georgians who want their country to take a stronger position in solidarity with Ukraine and against Russia.

Thousands of Georgians gathered at a series of pro-Ukraine, anti-Russia rallies in Tbilisi and other cities around Georgia on the evening of February 24, with more demonstrations planned for the weekend.

“The pathos of today’s announcement by the prime minister does not reflect my position – Georgians do not abandon their friends in need,” the country’s human rights ombudsman, Nino Lomarjia, said. “Ukraine’s battle for freedom and dignity is our battle as well. Those of you who think the same way, express your position, there are many of us and we have the right to speak our mind.”

In apparent concern over public anger, Georgia’s parliament announced that it was restricting public access to the building on February 25. “The goal of these measures is to prevent possible provocations and to ensure working conditions for the members of parliament,” the legislature’s press service said in a statement.

The ruling Georgian Dream party also has in recent days declined to hold a special session of parliament to address the Ukraine situation, and Georgian officials have not traveled to Kyiv to express their support for Ukraine, unlike many of Kyiv’s other allies.

“Georgians, my brothers, how is this?” asked Oleksiy Honcharenko, a member of Ukraine’s parliament, in a Facebook post in response to Garibashvili’s statement. “Did you forget how the president of Ukraine flew to Tbilisi when Russian tanks were heading to Tbilisi in 2008? Are you going to put up with this or explain as a people to Garibashvili what he ought to do?”