Georgia: Seeking to Bring Back the Soviet-Era Spa Experience 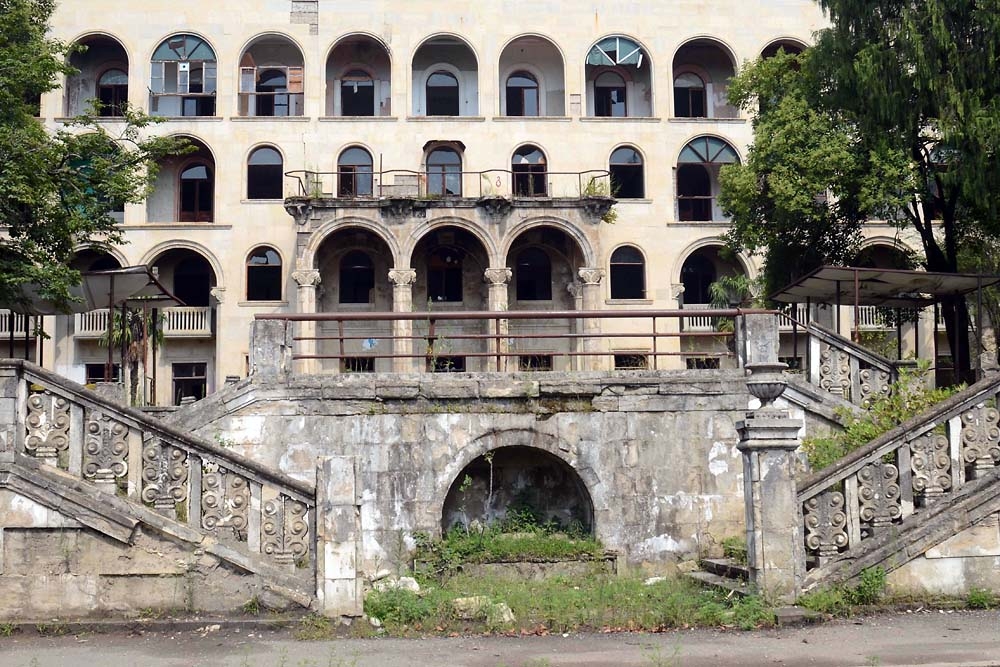 For decades under the Soviet Union, sanatoriums in Tskaltubo provided thermal treatment to the ill and relaxation for the elite. 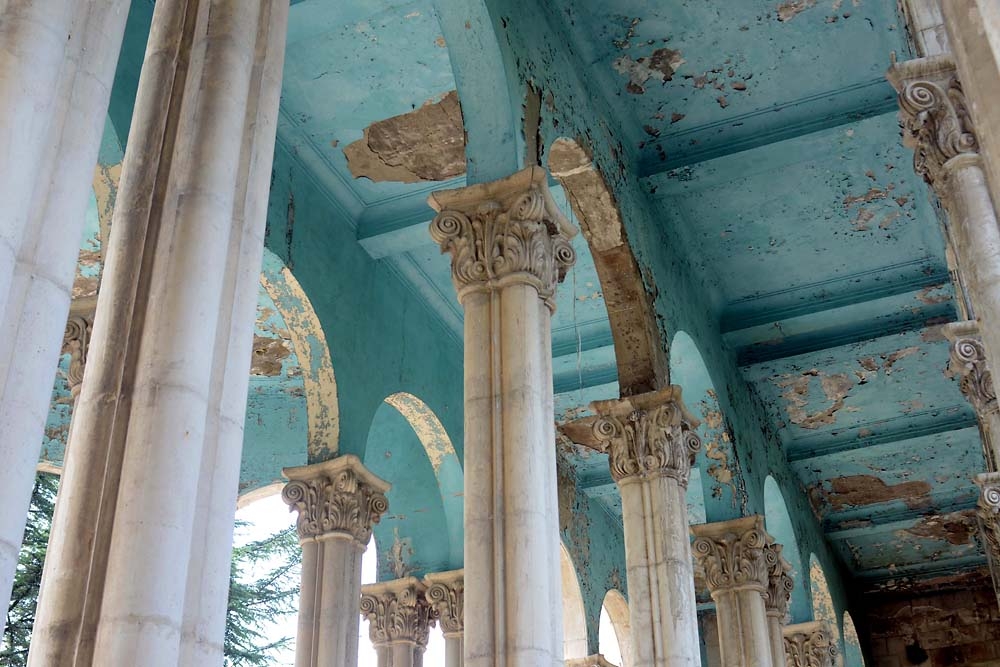 During the past two decades most of the sanatoriums in Tskaltubo have fallen into disrepair. 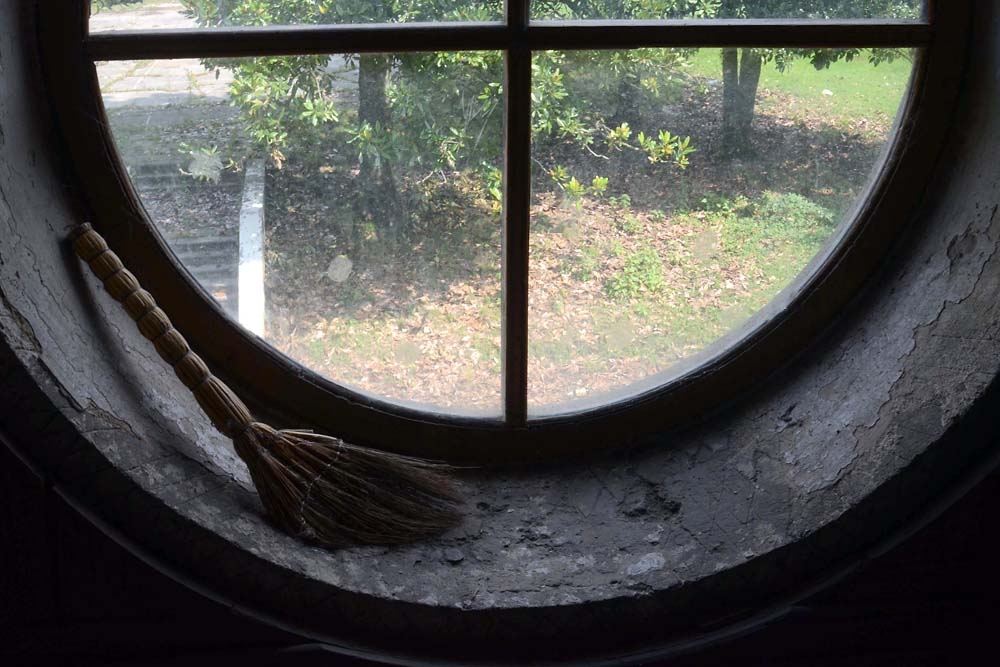 Trains linking Tskaltubo with Moscow gave the Soviet political elite a direct line to the sanatoriums of Georgia. 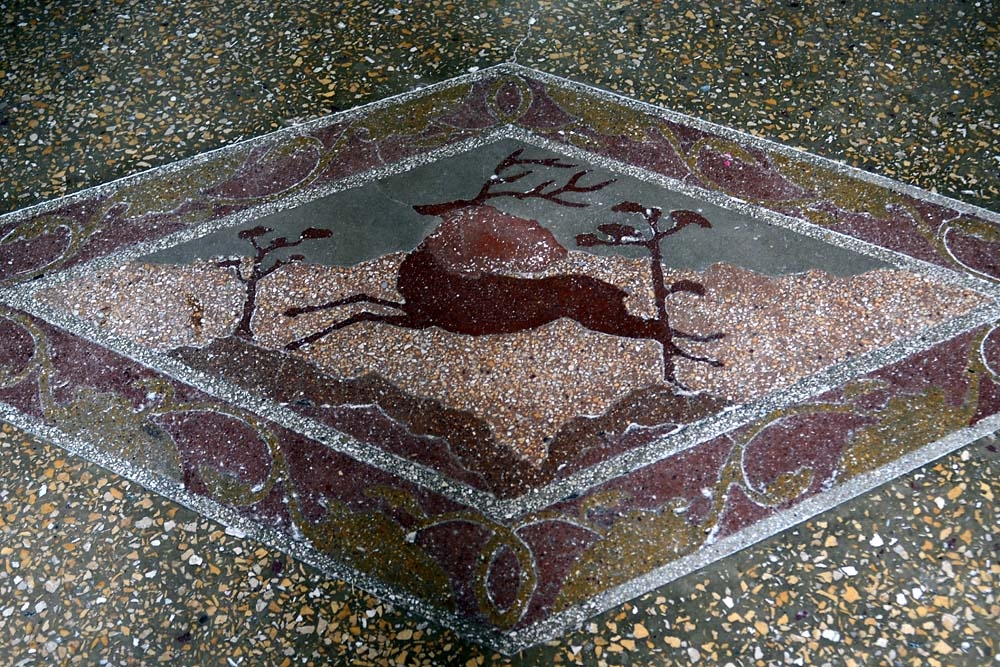 Most of the original floor tile at the former sanatorium for the Soviet Ministry of Defense remains. 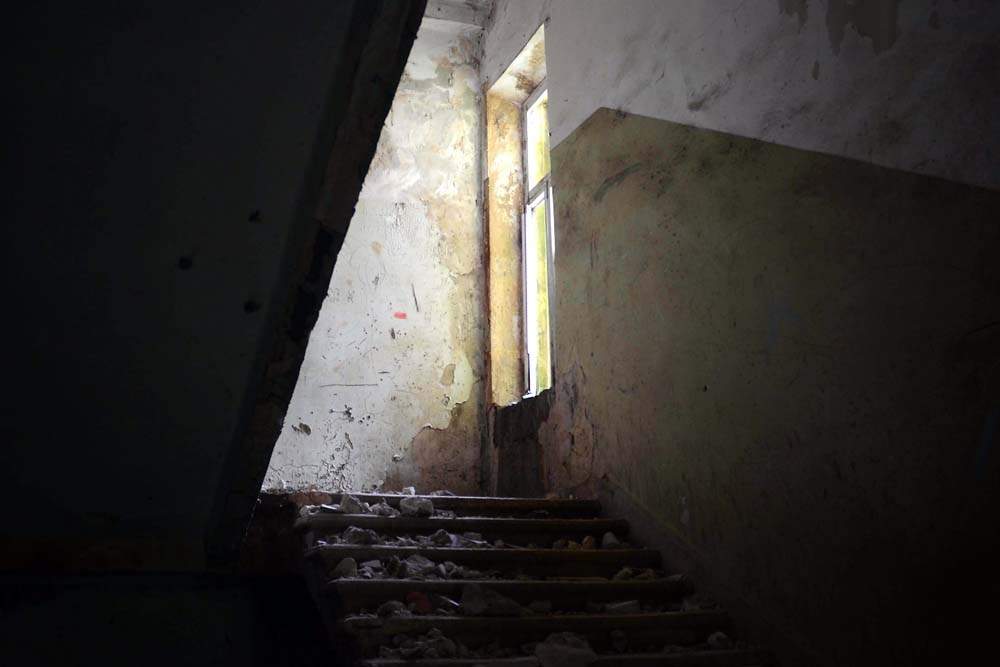 Georgia's government is working together with foreign investors and the World Bank to bring the town back to its former glory. 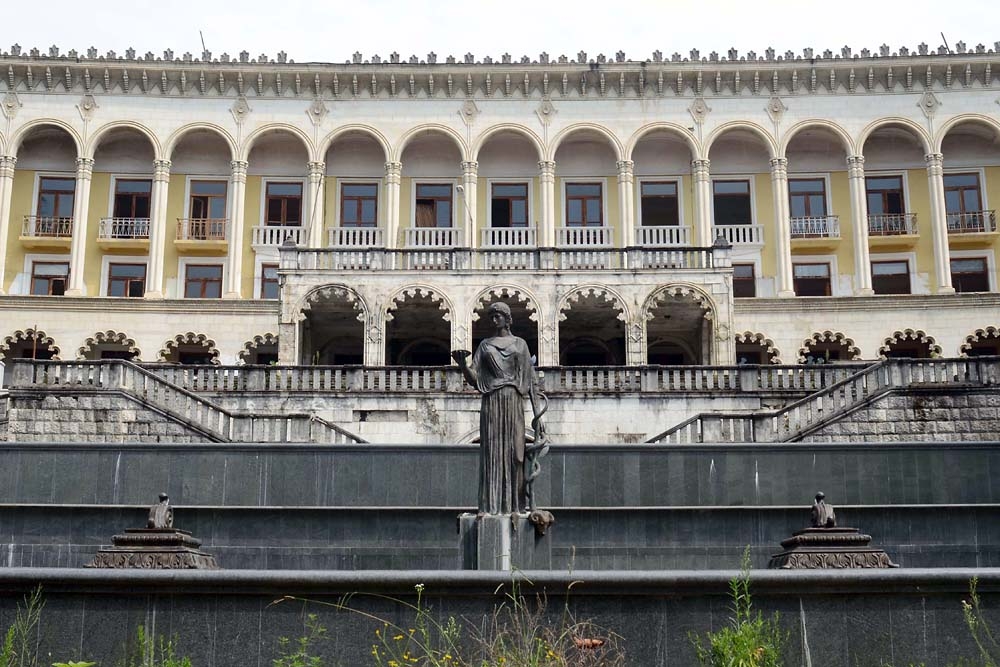 During its heyday an estimated 600,000 visitors arrived annually for treatment in Tskaltubo. 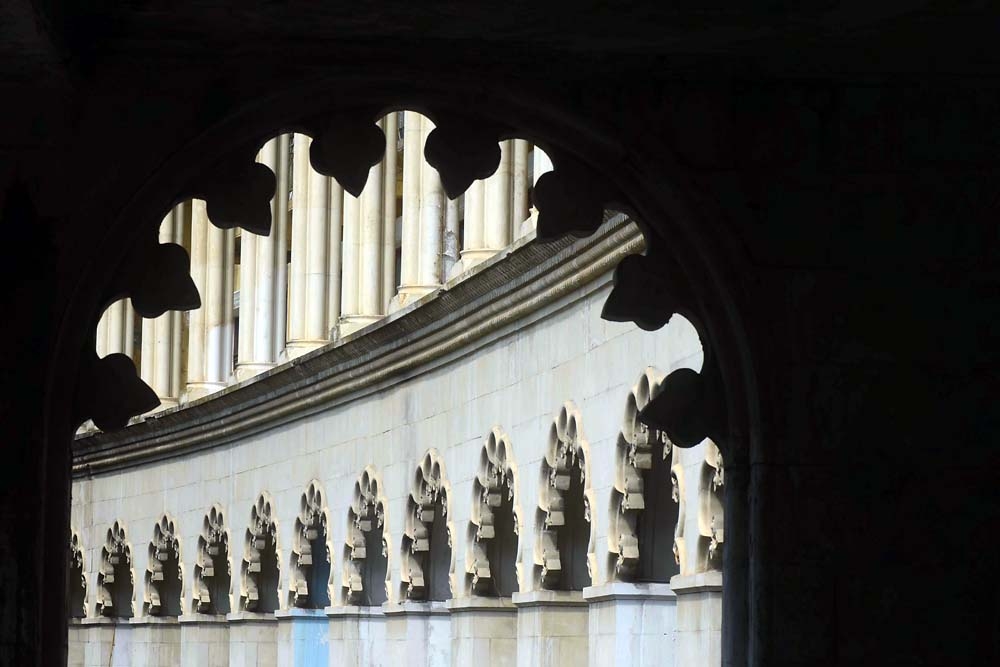 Tskaltubo was made famous when a network of underground, natural springs was rediscovered in the 1920s. 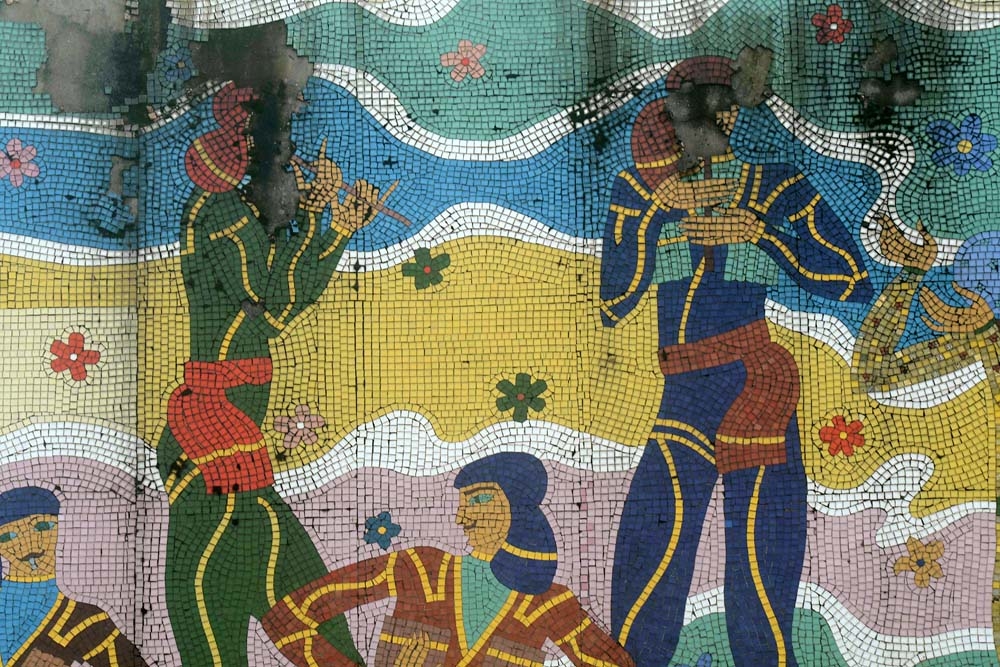 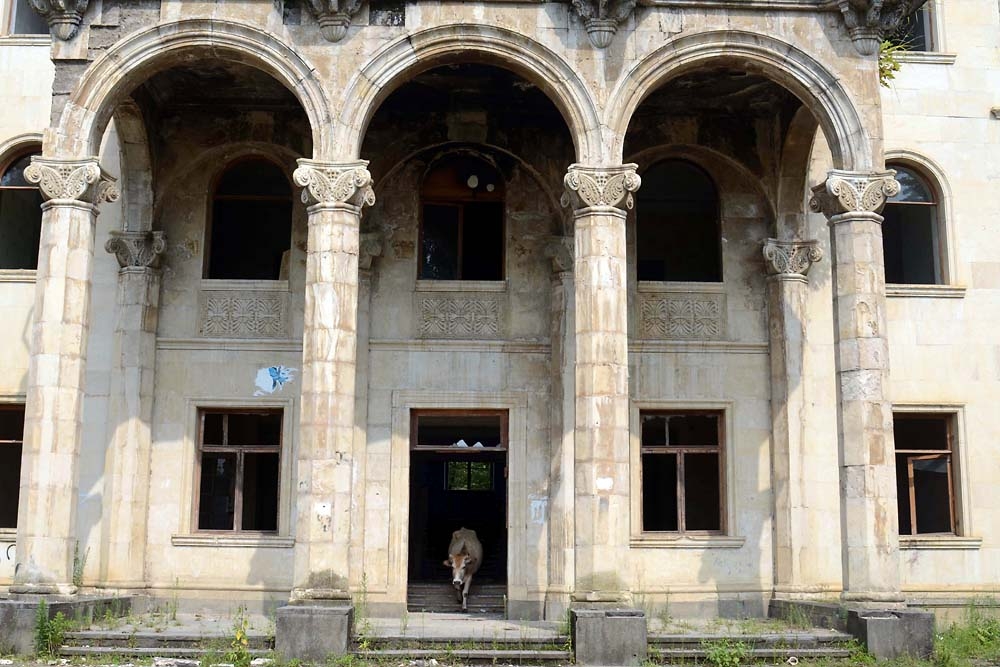 A cow exits the front door of a Soviet-era sanatorium in Tskaltubo. 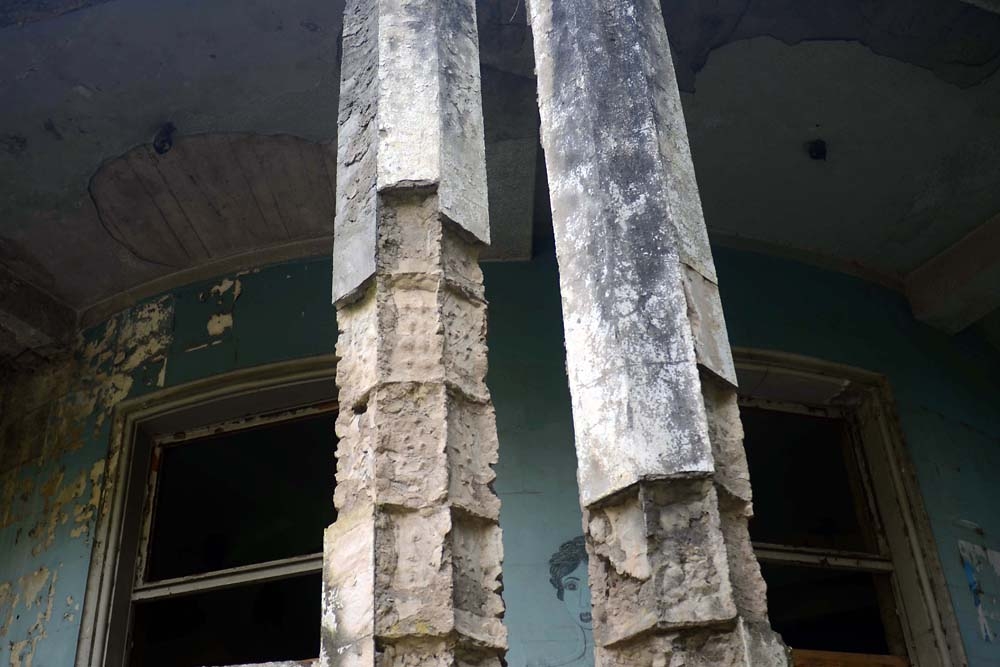 Tskaltubo is one of the last Soviet-era resorts that is largely government owned. 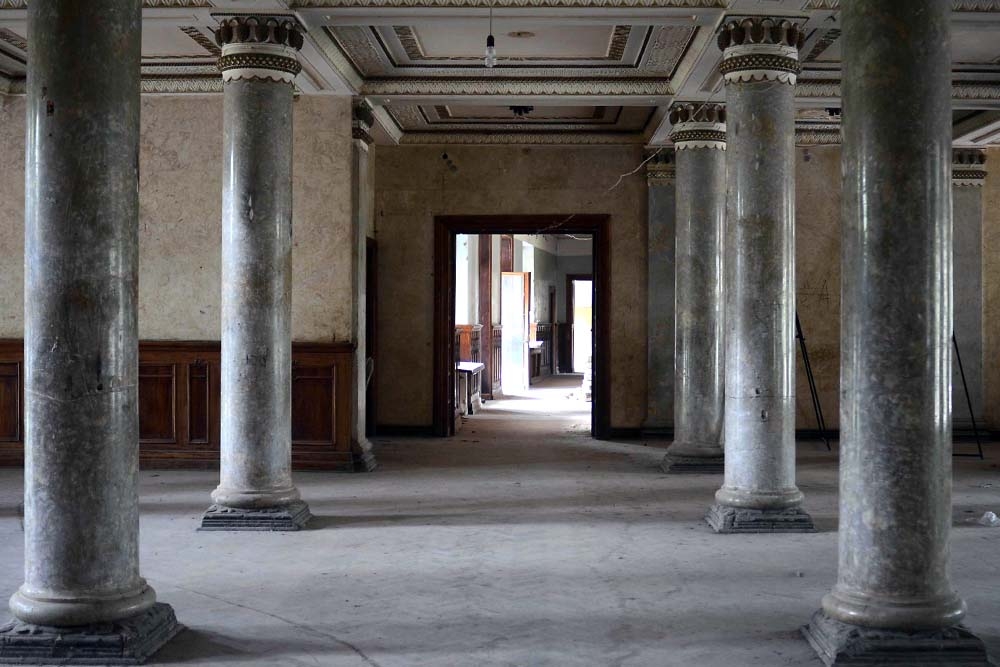 The 35,000-square-meter Imereti Sanatorium is partly renovated, providing a glimpse into the glamour of the Soviet-era resort.
prev
next

Known for its pristine mountain air and curative waters, the South Caucasus country of Georgia used to be closely associated during the Soviet era with doctor-prescribed rest and relaxation. The tumult of two decades of independence eroded the country’s reputation as a place to relax and rejuvenate. But these days, policymakers and some investors are eyeing the country’s aging spas as an opportunity to gain a share of the $2-trillion global spa-and-wellness market.

“If Turkey has well-developed seaside resorts, we have spa resorts like Abastumani, or Borjomi,  or Sairme, or Tsqaltubo,” asserted Georgian real-estate investor Lasha Papashvili, naming some of the country’s most popular alpine resorts.

In Abastumani, one of the country’s oldest health-resort destinations, located in southwestern Georgia, the air is reputed to ease the symptoms of asthma, bronchial infections and even tuberculosis. In Tsqaltubo, a tiny hamlet tucked into the foothills of western Georgia, the slightly radioactive thermal waters have been credited with curing everything from infertility to paralysis. Sairme, in the west, also attracts people for the curative qualities of its thermal waters, and Borjomi, in the center, for its fame as the source of a legendary Soviet mineral water.

But the question remains whether these attractions are strong enough to draw foreigners to this tiny, developing country, sandwiched between Turkey and Russia. To tap into the global R&R demand, major investment is needed. Over the past two decades, Georgia’s spa industry largely has fallen apart, with once-glamorous hotels and resorts crumbling under the strain of hosting tens of thousands of families displaced by the 1992-1993 war with separatist Abkhazia.

Before shopping for investors, the Georgian National Investment Agency (GNIA) will run a survey this autumn to determine each resort’s actual “competitive advantage,” said Giorgi Pertaia, the head of the agency. Possible strategies include a rehabilitation center for athletes or creating a Georgian version of Germany’s Baden-Baden spas.

The potential demand for such facilities already has attracted support from the World Bank, which has put up $30 million in co-funding for the government to invest a total of $37.5 million in Imereti, a central region rich with spas. An estimated 75 percent of the funds are earmarked for overhauling water and sanitation systems and renovating public buildings and an 80-hectare public park at Imereti’s star resort, Tsqaltubo. Revitalizing the resort, which sits next to an eponymous town of over 71,000 people, is a key part of the World Bank’s strategy for aiding economic development in the Imereti region, said Ahmed Eiweida, who oversees the World Bank’s sustainable development policy in the South Caucasus.

Sairme, a resort that dates back to the 1930s, saw $13 million in private investment come in amid an overhaul of its roads, water and electricity networks. The initiative also received co-funding from the World Bank and Georgian government. But did the investment pay off in terms of attracting new customers?

Mariam Surmava, the administrative manager at Sairme Hotels and Resorts, claims that Sairme attracts guests from around the world, but noted that the majority of the 5,000 visitors to the resort’s main hotel in 2013 came from the former Soviet republics of Kazakhstan and Azerbaijan.

Bagdat Duskinova, the director at Astana Best Travel, a travel agency in the Kazakstani capital, Astana, said that Georgian spas are gaining popularity among the cash-rich in Kazakhstan due to a mixture of nostalgia and affordability.

“For us, a lot of people have problems with their stomachs and digestive systems, so they need treatment specifically with mineral water,” Duskinova said. Georgia, roughly a four-hour flight away, is a good option because it is closer and easier to reach from Kazakhstan than European destinations, she added.

Russia has the potential to supply a steady stream of visitors, too. Ostrovok.ru, an online tour agency, receives about 25,000 requests per month for Georgian hotels, said the agency’s spokesperson, Tatiana Yakovleva. At the same time, concerns about safety – the two countries fought a five-day war in 2008 – still persist, she added.

Those who are working to revive the spa industry are quick to recall happier days.

Prior to the 1991 collapse of the Soviet Union, a special train ran to Tsqaltubo directly from Moscow, bringing thousands of visitors for treatment each year, according to Elguja Melkadze, the marketing manager at the only bathhouse in the resort still in operation, Bath Number 6.

Today, however, all but a handful of the resort’s 21 spas are used to house displaced families from the Abkhazia conflict. Meanwhile, the grounds of a dacha once used by former Soviet dictator Joseph Stalin is now used as grazing land for goats and pigs.

Private investors, including some from Asia and the Middle East, have expressed interest in purchasing piecemeal the town’s Soviet-era buildings, said GNIA’s Pertaia. But the government wants to wait until a comprehensive development strategy for the resort is in place, he stressed. “[Tsqaltubo] is something like gold in the middle of Georgia,” he explained.

“Those who like gadgets, they can go to Disneyland,” added the World Bank’s Eiweida.