Georgians are meeting the thousands of Russians fleeing their country’s military mobilization with a mixture of fear, irony, and empathy. 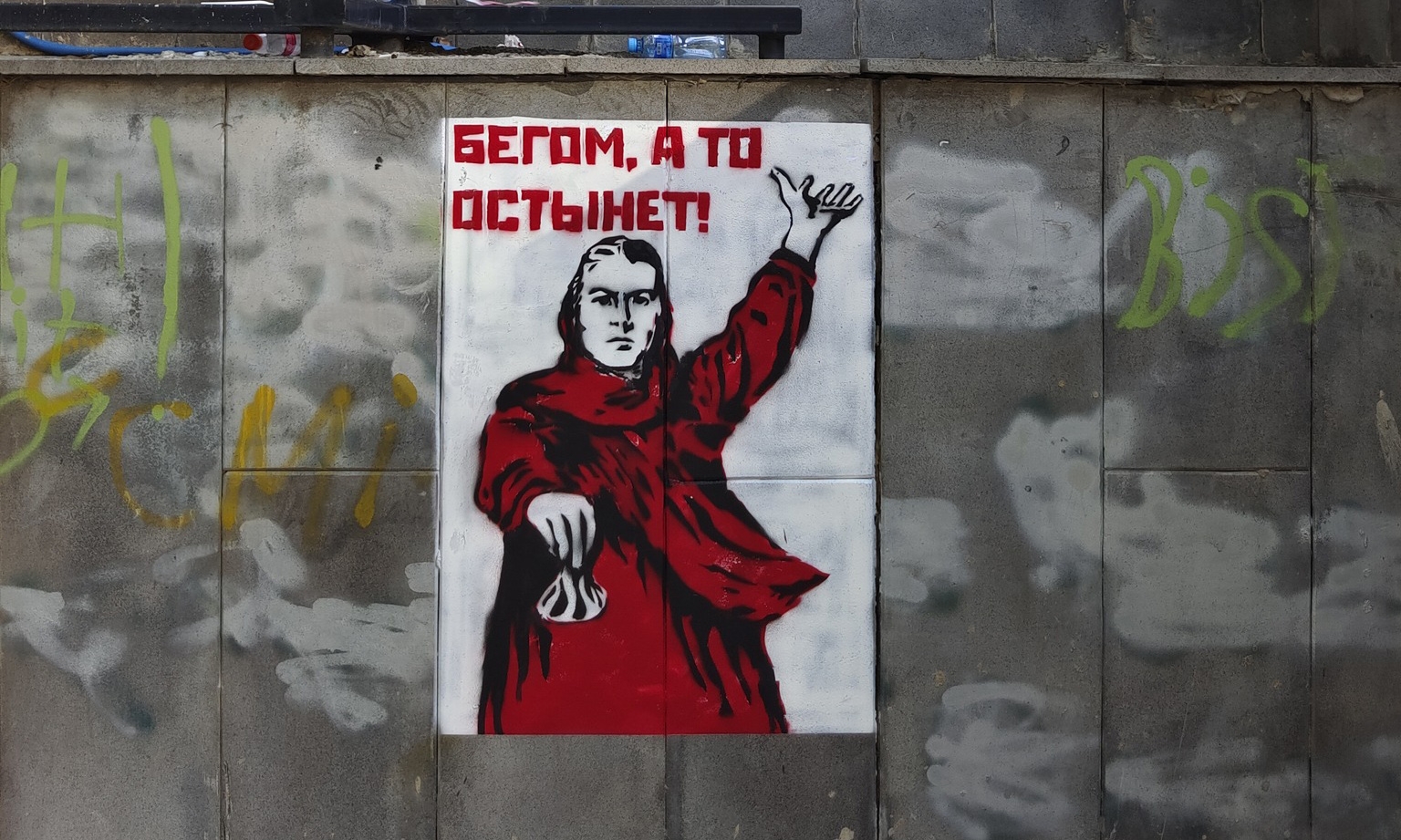 “Hurry, or it will get cold” (Facebook/Gagosh)

A new piece of street art in a Tbilisi underpass is a play on the classic Soviet “The Motherland Calls” poster from World War II. But instead of holding the military oath as in the original, the woman is clutching a Georgian khinkali dumpling. And instead of the patriotic slogan, the caption now reads, “Hurry, or it will get cold.”

As thousands more Russians again pour into Georgia – this time, escaping their country’s mass military mobilization for the war in Ukraine – Georgians are greeting them with characteristic irony.

The humor, though, has been mixed with more emotions as Georgians struggle to come to terms with how to think about the influx, let alone what to do about it.

As a country that has suffered much at the hands of Moscow, and today remains in open conflict with the Kremlin, Georgia has struggled to figure out what to call these new arrivals; attempts have ranged from “refugees” and “deserters” to “tourists” or “occupiers.” And the phenomenon of their arrival is also imagined variously, from a security issue to an ethical responsibility to a moral dilemma.

"It would be wrong for us to close the border to Russians," prominent TV anchor Merab Metreveli wrote on Facebook, arguing that if Georgians were faced with similar circumstances, they also would be trying to flee. "But it would be also wrong to let in everybody in an uncontrolled way. What is the way out?" he asked.

The first instinct of Georgia’s government, though, was not to define things at all.

“These people, ethnic Russians, have been arriving in Georgia for years. Does it have to become a problem now?” Interior Minister Vakhtang Gomelauri told reporters on September 27.

As public concern mounted, however, ignoring the problem was no longer viable and the authorities have begun to offer more data and clarity on the issue.

Official numbers released at the end of September showed a sharp rise in Russians entering the country following the mobilization announcement on September 21, with a net of 5,000-6,000 entering daily starting on September 23.

By September 30, though, the numbers had returned to normal. That was attributable at least in part to the fact that officials in North Ossetia, the Russian republic on the one border crossing with Georgia, on September 28 reported halting in-bound car traffic and tightening restrictions on men subject to mobilization trying to leave the country.

Based on the official data, then, somewhere north of 20,000 people have joined the already large community of Russians who moved to Georgia in the wake of the war in Ukraine.

They came in distinct waves: first, in the immediate aftermath of the invasion, politically minded Russians and those whose businesses were hit by sanctions flocked in. Then in the summer, Russian tourists – no longer bound by Covid restrictions and with fewer vacation options as a result of the war – came in numbers rivaling those in the pre-pandemic years.

Now, as fall arrives and the tourist waves have receded, Georgia is experiencing the third wave.

The exact number of Russians who came to stay in Georgia prior to mobilization has been a matter of dispute, with estimates varying from 20,000 to more than 40,000. On top of that, Georgia is sheltering around 15,000 Belarusians plus an estimated 30,000 Ukrainians who have fled the war. The most noticeable effect of the influx has been skyrocketing rents, as landlords seek to take advantage of the rising demand.

“It will be a heavy burden for the social fabric of the country and also for the budget of our small country,” Nikoloz Samkharadze, the head of the Georgian Parliament’s foreign relations committee, told CNN on September 29, in a rare acknowledgment by a Georgian official of the complexity of the situation.

Describing a “moral dilemma,” Samkharadze said closing the border was not an option “because that would be in favor of Putin, because he wants to mobilize these people and send them to fight in Ukraine.”

Many in Georgia, particularly in the political opposition, had proposed closing the border in response to perceived economic or security threats the new arrivals may pose.

The opposition party Lelo for Georgia suggested a special entry regime for “citizens of the country carrying out a military occupation” (Russia bases troops inside Georgia’s two breakaway territories, Abkhazia and South Ossetia). The proposed special regime envisaged issuing short-term visas (as opposed to the current one-year, visa-free entry policy) at the border and demanding written confirmation that the entrant recognizes the “Russian occupation” and Georgia’s territorial integrity.

For its part the United National Movement, Georgia’s largest opposition party, proposed that Russians entering Georgia pay an “occupation tax” of 1,000 Lari (about $350).

Others, though, called for cooler heads to prevail and to recognize that the young men arriving in Georgia are trying to escape Russia and the war.

“Russians run from Russia to not get killed for Russia and not to turn into killers for Russia!” Lasha Bugadze, a prominent Georgian writer, wrote on Facebook on September 30, warning against letting fear and paranoia dictate Georgian policy.

“However many more of them are to arrive, remember that they are fleeing!” he wrote