Georgia, Tajikistan, Among Countries Most Dependent On U.S. Military Aid 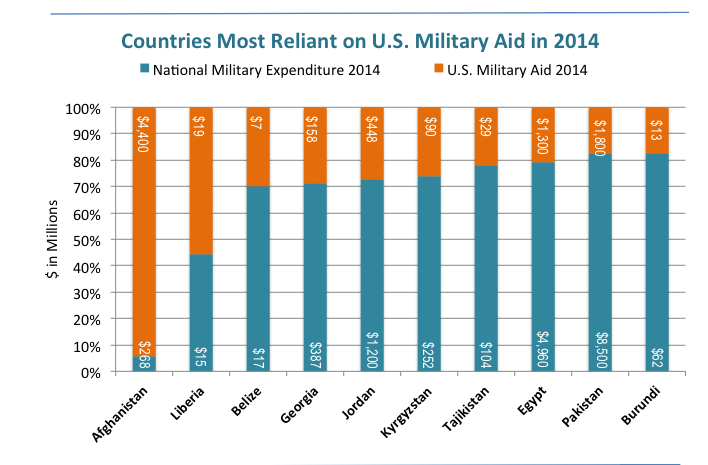 By Pentagon budget standards, the countries of the former Soviet Union are relatively insignificant recipients of American military aid, dwarfed by the billions given annually to Israel, Egypt, and Pakistan. But a new study has shown that some of the security forces in the region are unusually dependent on American aid.

The survey, by the Washington advocacy organization Security Assistance Monitor, compared the amount of military and police aid the U.S. gave to every country in 2014 to the countries' respective defense budgets. And it found that among the ten countries where U.S. aid made up the largest proportion of the defense budget, three were former Soviet republics: Georgia, Kyrgyzstan, and Tajikistan.

Georgia was the fourth-most dependent country, with $158 million in U.S. security assistance compared to a defense budget of $387 million. Tajikistan was seventh, its budget of $104 million supplemented by $29 million in U.S. aid. (Tajikistan will surely climb up the list soon, as it's slated to get $50 million over the next two years in additional anti-terrorism funding from the Pentagon.)

Kyrgyzstan was sixth on the list, but this is somewhat misleading: in 2014, Kyrgyzstan got $90 million in U.S. aid, but nearly all of that ($81 million) was payment for the Manas air base, which the U.S. was forced to leave that year. The $81 million is an estimate based on the best information SAM was able to get (a SAM analyst told The Bug Pit that they are working to try to get more precise information from the Pentagon). It may have simply been an accounting quirk. In any case, the Manas rent money wasn't really military aid, but a cash payment to the Kyrgyzstan government, even if for U.S. bookkeeping purposes it's classified as military aid.

It also should be noted that the methodology doesn't take into account Russia's aid to its allies in the Collective Security Treaty Organization, which is disbursed via hard-to-track "discounts" on military equipment and other means. And so it's not clear from these numbers whether Tajikistan is more dependent on the U.S. or on Russia.

Nevertheless, the results are somewhat surprising, as Georgia and Tajikistan are comparatively more dependent on U.S. aid than Egypt (eighth), Pakistan (ninth), and Israel (not in the top ten), all of which get more than $1 billion per year. The most dependent country, by far, was Afghanistan, with a $268 million budget and $4.4 billion in U.S. aid.