New gender quotas will break up the gentlemen’s club that is the Georgian parliament, but some doubt that the measure will do much to empower women more broadly. 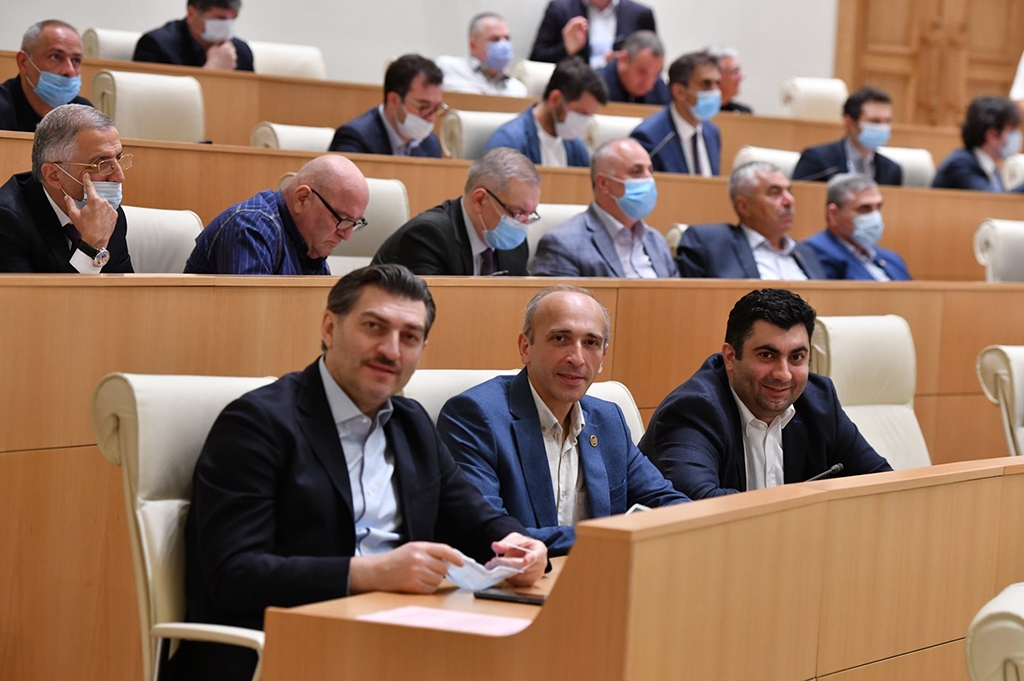 Georgia’s parliament is currently nearly 90 percent male. But a newly adopted gender quota will boost the number of women members of parliament up to at least 20 percent this year and more in the future. Local assemblies will have an even higher proportion of women.

“Today, laws in this country are made in rooms full of men, where women – the majority of this country’s population – are a small minority,” said Maka Meshveliani, a member of the advocacy group Women’s Movement, which spearheaded the initiative. “Setting gender quotas helps make sure that women are better represented in the legislative assemblies and that politics are more about the issues that matter for the majority of the population,” she told Eurasianet.

The new law – adopted following a failed attempt in 2018 – also was pushed by European countries; the EU-Georgia Association Agenda called for the country to “take active steps towards increasing women’s representation in political life and the decision-making process."

But the idea of quotas rubbed many Georgians the wrong way.

“It is conceptually wrong, as it promotes the idea that people should be elected to parliament based not on their good ideas or skills, personal qualities or credentials, but rather on whether they have a penis or a vagina,” said Ghia Nodia, a prominent political scientist and analyst, in a Facebook post. He further argued that the presence of women in parliament may have little connection to the problems that regular women face. “Does it make any difference for a woman, who is abused by her husband or is mistreated at work, if women hold 25-33 percent or, say, 10-15 percent of the parliament?” he asked.

Meshveliani countered that better legislative representation is a good start, and that a predominantly male legislature is inherently less sensitive to women’s issues like sexual harassment, gender-based violence and a pay gap between men and women estimated at 36 percent. “You can’t expect men to emphasize to the same extent issues that they don’t face on a daily basis,” Meshveliani said.

Some accomplished women, most notably magazine editor and commentator Tamara Chergoleishvili, also argued against quotas, saying that women don’t need men to give them a leg up in politics. “How are you [a woman] going to win, if there is no space for direct competition with men?” Chergoleishvili wrote in an editorial in the news website Tabula. “If the goal is to achieve equality, what sets a better incentive and example – women defeating men or winning in a separate competition amongst themselves?”

But others countered that the very idea of quotas is to level the playing field to help women overcome the many barriers they face in Georgia’s distinctly patriarchal society. “Some now claim that quotas are insulting for women,” feminist activist Baia Pataraia said in a Facebook video. “What is actually insulting is that political parties are saying that there are not 30, 40 or 50 qualified women out there that they can bring to the parliament.”

Georgia previously attempted to enlist more women by boosting state funding for parties that included women in their electoral slates, but that resulted in only 25 women being elected to the 150-seat parliament in the last elections, in 2016. Of those, four subsequently quit and were replaced by men.

The remaining women, most of them members of European Georgia, include many of the parliament’s most powerful and well-known members, but it does not change the fact that Georgia features one of Europe’s most testosterone-heavy parliaments.

To prevent resignations from deepening the legislative gender imbalance, the new law now requires that a resigning member of parliament can only be replaced by a member of the same gender. The financial incentives were also left in place on top of mandatory quotas. “Basically, if we had only the carrot policy before, now we have both the carrot and the stick,” Meshveliani said.

Under the new law, adopted on June 29, all parties contending for parliament will have to award every fourth party-list seat they win to a person “of a different gender.” In practical terms, that means that in this fall’s election, of the 120 seats chosen on a proportional basis, at least 30 will go to women. The remaining 30 seats will go to individual candidates representing geographical electoral districts and won’t be subject to the quota.

In 2024, however, when Georgia transitions to a fully proportional system, that will mean that at least 37 seats in parliament will be set aside for women.

Further changes will go into effect in 2028, when the one-in-every-four formula will be replaced by one-in-every-three, so that 50 seats will go to women.

The new law establishes a stricter formula for local elections. It requires parties competing for seats in local legislative councils to include a practically equal number of men and women in their electoral lists.