Georgia: Tbilisi and the One-Enemy State 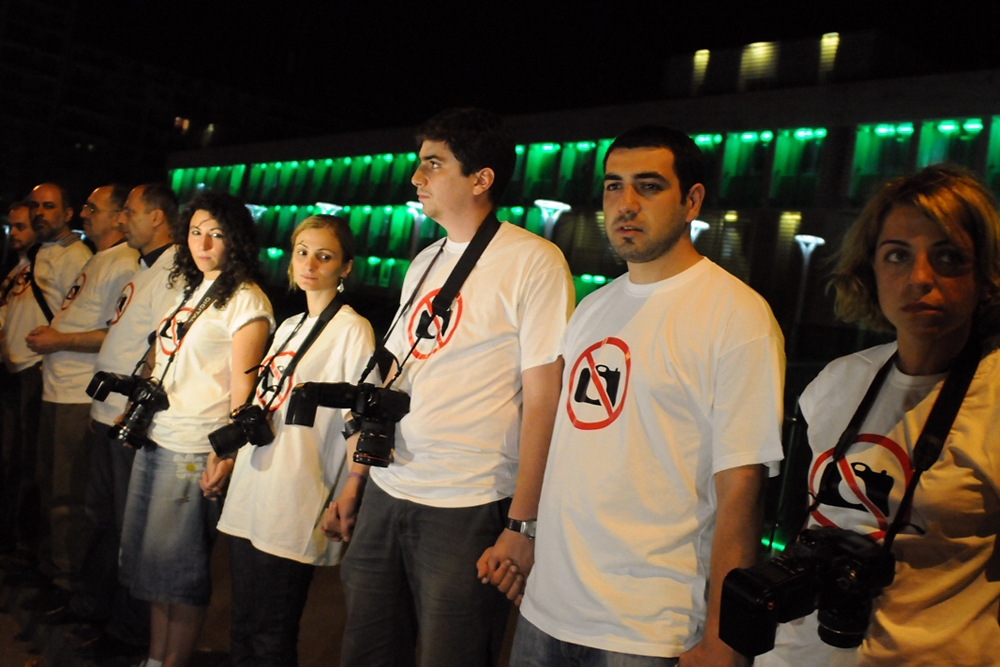 Photographers stand up for colleagues arrested and charged with espionage. (Photo: Temo Bardzimashvili)

The espionage charges brought recently against three photographers in Georgia are stirring a debate in Tbilisi: how spooky is the Russian bogeyman?

Some observers believe Georgian President Mikheil Saakashvili’s administration is suffering from a severe case of spy mania. Others, however, maintain the cases are all too real.

Based on publicly available accounts, the Georgian government has arrested 39 people on espionage charges since Saakashvili’s rise to the presidency in early 2004. A brief case in 2007 against opposition Labor Party Chairman Shalva Natelashvili was later dropped.

That averages out at a rate of nearly six cases per year for the past seven years; a high frequency compared with elsewhere in the former Soviet Union. “I find it very hard to understand why anyone needs that many spies,” said political scientist Koba Turmanidze.

“But I don’t think they [Georgian officials] are making up things entirely,” he continued. “They might exaggerate something, but these things normally exist in one form or another.”

Shota Utiashvili, head of the Ministry of Internal Affairs’ Analytical Department, stressed that there is ample cause for all the arrests. “We know that Georgia is one of the main focuses of the Russian special services, one of the main targets,” Utiashvili said, citing the presence of thousands of names of known operatives in Soviet-era KGB files.

Tornike Sharashenidze, a Russian affairs expert at the Georgia Institute of Public Affairs, supported the government’s assertions. “They [Russian leaders] don’t recognize the Georgian government -- they don’t make a secret of it,” Sharashenidze said. “So, there is no wonder. I don’t understand when some people are surprised when Russian spies are exposed in Georgia.”

But some in Tbilisi believe the Saakashvili administration is taking things too far. In July 15 comments published by the Russian daily Kommersant, opposition politician Irakli Alasania, who was formerly employed in Georgian intelligence, accused Saakashvili of using espionage as a cover for politically motivated arrests. “This is his [Saakashvili’s] spy mania,” argued Alasania, a onetime Georgian ambassador to the United Nations. “Saakashvili sees everything as connected to Russia’s special services and politics. … He says anyone who is against me . . . is my enemy and is helping Russia.”

Georgian leaders’ wariness of Russia pre-dates the Saakashvili era by a couple of centuries. Tsarist Russia’s 1801 absorption of Georgia into the Russian Empire under the guise of a protectorate agreement, the Red Army’s 1921 overthrow of the Democratic Republic of Georgia, and Russia’s 2008 war with Tbilisi over South Ossetia are routinely seen as symptoms of a disease -- a chronic Russian lust for geopolitical control over Georgia.

Since Georgia regained independence, Russia reputedly has engaged in several covert operations against Georgia, including assassination attempts against former President Eduard Shevardnadze in 1995 and 1998, claimed Utiashvili, the Interior Ministry spokesman. “[T]hey [Russian operatives] have been very, very active,” Utiashvili said. “Georgia remains a target and the damage they can potentially do to Georgia is huge.”

Government critics contend that the sheer volume of cases against suspected Russian agents, coupled with the fact that the evidence made available to the public is often sketchy, with strong emphasis on confessions, indicates that espionage has become the government’s idée fixe. Self-incriminating statements, critics add, can be obtained through the use of psychological pressure.

The latest instance -- espionage charges brought on July 9 against three photographers -- has raised concerns that Interior Ministry officials are using the accusations as a payback for the trio’s photo coverage of the bloody May 26 police crackdown on opposition protesters, an event that sparked heavy international criticism of Georgia.

Two of the photographers were working under government contracts at the time; Irakli Gedenidze as President Saakashvili’s photographer and Giorgi Abdaladze as a freelance photographer for the Foreign Ministry. The third photographer, Zurab Kurtsikidze, worked for the Frankfurt-based European Pressphoto Agency.

Ariel Cohen, a senior research fellow at the Washington, DC-based Heritage Foundation, agreed with Tbilisi that Russia is using “the full tool box of state power against Georgia.” But Russia’s alleged actions do not relieve Georgian leaders of an obligation to meet high standards of proof in cases involving espionage or terrorism, Cohen added.

Turmanidze, the political scientist, finds the government’s case against the photographers generally plausible, yet notes that domestic political reasons also could be motivating Interior Minister Vano Merabishvili’s hunt for Russian agents. Turmanidze pointed out that Saakashvili is constitutionally required to step down as president following presidential election in 2013.

“We don’t know who will be the next president,” Turmanide said. By uncovering alleged plots against the state, he suggested that Merabishvili may be trying to politically position himself to make a presidential run.

Asked if other regional players – Turkey, Iran or the United States – may also be engaging in espionage on Georgian soil, the Interior Ministry’s Utiashvili downplayed the notion. “It is possible other special services are using Georgian territory as well, but we have only one enemy,” Utiashvili said. Russia is “our only enemy.”