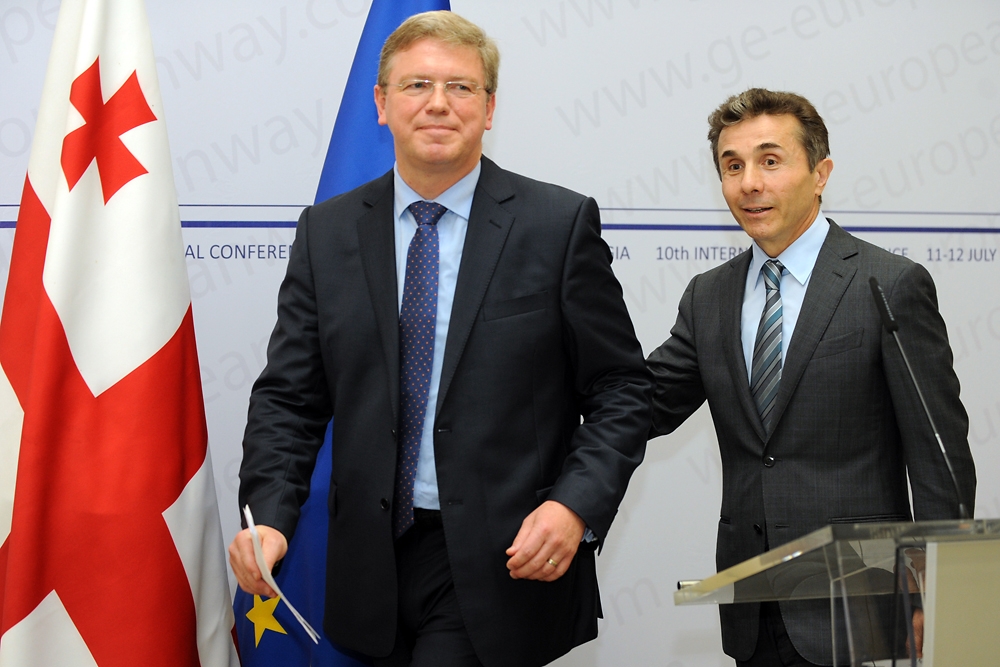 Officials and political analysts in Tbilisi believe the Kremlin is ready to reach deep into its bag of tricks to try to coerce Georgia into ditching its European Union membership ambitions and embracing Russian President Vladimir Putin’s Eurasian Union vision.

Georgia traditionally has been the most pro-Western state in the South Caucasus. But in the almost year since Prime Minister Bidzina Ivanishvili’s Georgian Dream coalition gained control of parliament, Georgia’s stance toward Russia has softened somewhat.

On November 28, during a summit in Vilnius, Lithuania, Georgia is expected to move closer to the European Union when it is expected to initial an Association Agreement, a major step toward potential EU membership. The agreement, which is also on the table for Ukraine and Moldova, will gradually reduce obstacles for closer economic ties with Brussels.

Some Georgians believe that prospect makes Moscow nervous -- not only because it will expand EU influence in a region the Kremlin still considers its “backyard,” but it will also place an economic obstacle between Russia and Georgia’s southern neighbor, Armenia, the lone Caucasian country to sign on to the Eurasian Union’s precursor, a Customs Union with Russia, Kazakhstan and Belarus.

Georgian State Minister for Euro-Atlantic Integration Aleksi Petriashvili on October 9 predicted to reporters that Russia plans “to use all the levers available to it to exert pressure [on Georgia]” before it initials the Association Agreement.

Speculation began about Tbilisi’s intentions after an offhand observation last month from Ivanishvili that Georgia might consider joining Russia’s Eurasian Union, if it proved “interesting.”

Zurab Abashidze, a former Georgian ambassador to Moscow who represents Tbilisi in negotiations with Russia over humanitarian and economic issues, stressed that the Georgian government is not discussing the Eurasian Union with the Kremlin, or any sort of compromise on Tbilisi’s policy of European integration.

While support among Georgians for the EU and the North Atlantic Treaty Organization remains strong (76 percent of 3,838 respondents in a recent poll for the National Democratic Institute), a chance exists that the public -- particularly in impoverished, rural areas -- could switch sides if Moscow makes the right offer, said Kornely K. Kakachia, a political-science professor at Tbilisi State University.

The fact that many Georgians understand the EU integration process more in terms of theoretical advantages tomorrow than immediate gains today plays into this risk, he continued. “Moscow knows this, and Moscow tries to utilize it.”

In the wake of the 2008 war between Russia and Georgia, fences installed by Russian troops in Tbilisi-controlled territory as the “state border” of breakaway South Ossetia constitutes one of the ways Moscow is attempting to apply that pressure, Kakchia and other analysts believe.

Beginning in roughly 2009, Russian troops have been installing barbed wire and fences within areas of separatist-controlled South Ossetia that neighbor on Tbilisi-controlled territory. In recent months, though, they have moved the “border” into Tbilisi-controlled lands, effectively incorporating Georgian orchards, cemeteries and houses into breakaway South Ossetia.

Denounced by Tbilisi’s Western allies and, in a United Nations speech, by President Mikheil Saakashvili, the fence-building appears to have paused for now, Interior Ministry spokesperson Kakha Kemoklidze told EurasiaNet.org on October 11.

But the fences “squandered” any chance that existed for Tbilisi and Moscow to mend relations, much less consider an economic alliance, said Tornike Sharashenidze, a professor of international affairs at the Georgian Institute for Public Affairs and the former director of the NATO Information Center in Tbilisi.

While ordinary Georgians possibly “are not very well aware of … the benefits of the European Union, … they cannot help but see the aggression of Russia,” Sharashenidze said.

Political analyst Alexander Rondeli, founder of the Georgian Foundation for Strategic and International Studies, agrees. “[With the fences] they show everyone -- and Georgians first of all -- that everything, all negotiations, are by Russian rules,” Rondeli said. “It is [a] classical, old strategy: the powerful do as they wish, and the weak do what they can.”

Ivanishvili himself has said he does not plan to visit the affected villages since his presence “will do nothing.” Officials maintain that the fences are the fault of the 2008 war with Russia under President Saakashvili, but conceivably could be used to pressure Georgia to join the Eurasian Union.

Yet the potential pressure points go beyond fences.

The Russian Federal Security Bureau (FSB) announced on October 4 that it has unearthed an international arms-smuggling ring, which it claims has been moving weapons from Georgian-controlled territory via South Ossetia into Russia’s North Ossetia.
Tbilisi has not yet responded to the claims. Such allegations often accompany upticks in tension over South Ossetia.

Another barb aims at a Georgian weak spot, the economy. Just three months after Russia reopened its markets to Georgian alcohol and mineral water, the Russian state consumer-protection agency RosPotrebNadzor once again began questioning the quality of imported Georgian wine.

Georgian wine producers, in the past have emphasized that they have diversified away from the Russian market.

The Georgian Foreign Ministry did not respond to questions in time for publication.

Abashidze, the Georgian envoy, underlined that, no matter Moscow’s actions, Tbilisi intends to stand firm on its desire to gain eventual membership in Euro-Atlantic structures. “We stated from the very beginning that we know Russia has red lines … and we have our red lines -- territorial integrity and our free choice in international relations,” he said. “These principals cannot be discussed.”