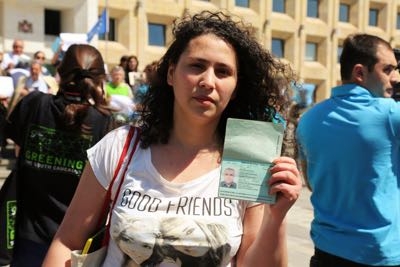 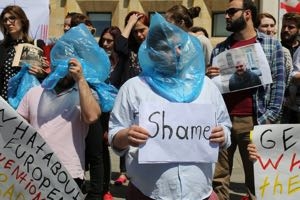 Tbilisi protesters on May 31 wore bags on their heads to symbolize the alleged kidnappers' blindfolding of Afgan Mukhtarli. 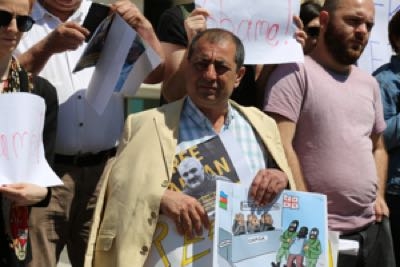 A Tbilisi protester carries a photo of reporter Afgan Mukhtarli and a cartoon that blames Georgia for his disappearance. 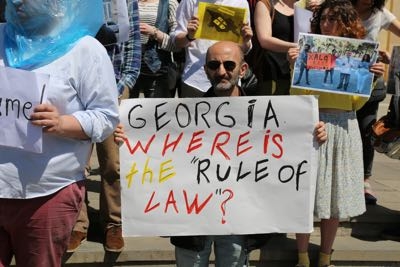 A protester outside of Georgia's government headquarters pinpoints a critical question about the Afgan Mukhtarli case.
prev
next

As the trial of abducted Azerbaijani journalist Afgan Mukhtarli opened in Baku, protesters on May 31 gathered in Tbilisi to demand that the Georgian government explain how the reporter had managed to disappear from the Georgian capital and somehow wind up across the Azerbaijani border in a Baku jail.

“I am holding his passport right here. Can the Georgian authorities please explain how a man crossed an international border with no identification documents on him?” asked Mukhtarli’s wife, Leyla Mustafayeva, holding up the 43-year-old reporter’s passport at the rally of media and rights-activists outside of Georgia's main government building.

As yet, there is no explanation. But Georgian President Giorgi Margvelashvili has stressed the need for one, calling the Mukhtarli case "a serious challenge for our statehood and sovereignty," and to Georgia's "state standards" for the defense of media and human rights.

Azerbaijani prosecutors, however, are not letting that stop them.

Mukhtarli’s trial on charges of supposedly crossing the Azerbaijani border illegally and carrying contraband opened in Baku on May 31. He faces up to three years and five years in prison, respectively, on the charges.

Lawyers and supporters claim that unknown assailants attacked Mukhtarli, known for his critical coverage of the Azerbaijani government, as he made his way back from a grocery store to his apartment in Tbilisi on the evening of May 29. Mukhtarli was reportedly forced into a car, beaten, blindfolded and driven about an hour and a half south across the border into Azerbaijan.

The abductors spoke Georgian, but Mukhtarli eventually ended up in a car surrounded by Azeri-speaking men, according to his lawyer, Elchin Sadigov. He said that the adductors put 10,000 euros into Mukhtarli’s pocket before hustling him across an Azerbaijani border crossing.

The Georgian police claim that they had nothing to do with it, but Mukhtarli’s supporters suspect that the Georgian security services cooperated with their Azerbaijani counterparts as a favor to Baku, the main source of energy supplies to Georgia. If the Azerbaijani security service acted without Tbilisi’s consent, it would be a brazen violation of Georgian law and borders, activists are saying.

He himself focused on the more technical aspect of the case – Mukhtarli’s passport.  Baku has stated, he advised, that the journalist “was arrested in the green border and not at the border crossing point, where a passport is not required for entering,” Georgian media reported.

Once Azerbaijan pinpoints “exactly to which side he was crossing, where he was crossing” Georgian government investigators will jump right on it and get to the bottom of things, he added. The government has opened an official criminal investigation into Mukhtarli’s disappearance.

Mukhtarli’s friends and family, however, dismiss as preposterous the Azerbaijani general prosecutor’s claim that he was trying to sneak over the border into Azerbaijan.

The journalist, who formerly acted as a bodyguard for investigative journalist Khadija Ismayilova, moved to Georgia in 2015, as Azerbaijan’s harsh treatment of journalists who ventured to criticize President Ilham Aliyev’s government intensified.

What Mukhtarli’s abduction and arrest will ultimately mean for Georgia’s civil-rights reputation is not clear, but, already, the country’s ombudsman has opted to issue a reminder.

"The Georgian state must look after defending the rights of every resident on its territory,” said Ucha Nanuashvili. “What's going on in a neighboring state should not influence the Georgian state's respect for people's rights."