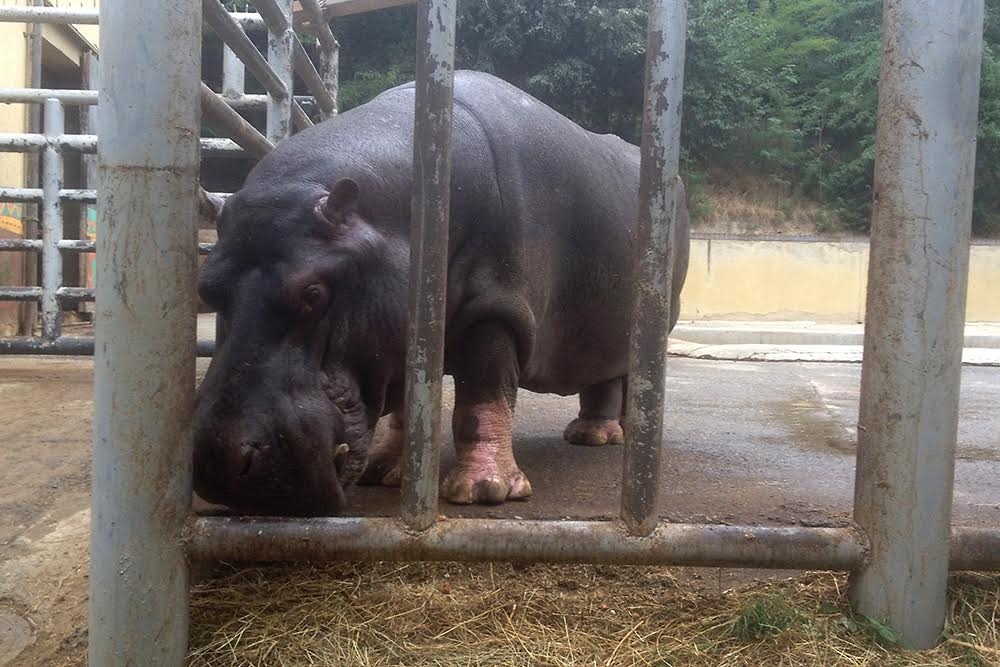 After her home was destroyed during the June flood, Beggi the hippo was moved to her new temporary home – the former elephant enclosure at the Tbilisi Zoo. Built in 1927, the restored zoo reopened three months after sudden flooding swept through parts of the Georgian capital, killing 19 people and more than half of the zoo’s population. (Photo: Paul Rimple)

The hippo has a new home, and the penguins have given up their wandering ways. Three months after a flood devastated Tbilisi’s city zoo, killing three zookeepers and 277 animals, the facility, a beloved spot for a family outing, has reopened. But questions remain about its future.

Placards with photographs of muddy wreckage and cleanup efforts, a firm reminder of the tragic scale of the June 13 flood, lined the zoo’s entrance on its low-key re-opening day, September 13. Given the destruction that occurred, Zoo Director Zurab Gurielidze told one Georgian daily that marking the re-opening with hoopla would have been inappropriate.

In the flood’s aftermath, an escaped tiger mauled a man to death, while the use of special forces and police to shoot predators dead on the streets of Tbilisi prompted local animal-rights activists to condemn the notion of zoos altogether.

Despite the tragedy, no emergency-response plan appears to exist for how to respond to a potential future zoo break. The zoo is “better prepared to deal with an emergency,” Gurielidze told EurasiaNet.org, but did not elaborate. He claims that “the flood came so suddenly” that even if the zoo officials had had the means, few measures could have been taken to avert the destruction that followed.

Former Deputy Mayor Dimitri Kumsishvili, now Georgia’s minister of economic development, said an “early warning system” would be implemented to alert motorists on a nearby road, but did not address the zoo itself.

The restored zoo, originally built in 1927 in what was then an undeveloped river valley, is still vulnerable to floods, though its surviving animal population of 876 now lives on higher ground. Sixty-five percent of its captive animals are now fish and reptiles — a testament to the strength of the neighboring Vera River’s flood waters.

The zoo, which has been working closely with the European Association of Zoos and Aquaria (EAZA), hopes to house an additional 150 animals by next spring. Gurielidze stressed that these will be “easy animals,” meaning non-predators.

Irakli Shavgulidze, director of NACRES, a biodiversity-conservation non-profit, believes that cooperation with EAZA will ensure the zoo can suitably care for its animals.

Safety and animal welfare, though, are not the only questions for the facility. The Tbilisi Zoo, which receives a significant chunk of its yearly budget from the city, issued four public tenders valued at 90,383 laris ($36,741) for its reconstruction process. Curiously, in a city dotted by construction projects, each of the tenders attracted only a single bidder.

City Hall reports that it spent a total of 200,000 laris ($81,300) on the three-month reconstruction effort. Officials offered no explanation for the difference in spending totals. The city and zoo both, though, now have their sights on the future. Already, even before a tender was issued, plans have emerged for the construction costs of a new zoo on 48 hectares (about 119 acres) of a former botanical garden near the Tbilisi Sea, an 11.6-square-kilometer reservoir about 20 minutes outside the city center.

In addition to having “safari park elements,” Gurielidze said the area would serve as a refuge for orphaned or injured wolves and bears.

Thirteen hectares larger than the Berlin Zoo, the project is estimated to cost 15-20 million euros (about $17-$22.6 million). Both the national and municipal government would contribute funds, according to City Hall, and the project could take three to five years to complete.

The origin of these estimates is unclear. A concept design for a new zoo, also located on the Tbilisi Sea, was last commissioned in 2012, under ex-President Mikhail Saakashvili’s United National Movement.

In the immediate aftermath of the flood, there was strong public support for both the zoo and its director, Gurielidze, whom prosecutors questioned in connection with the tiger mauling. But these days, few Tbilisi residents show interest in the zoo issue. Thousands of volunteers came to help clear wreckage from the zoo, even when some escaped predators were still on the loose, but public attention is now focused on other matters.

Nor do animal-rights activists appear to be courting public confrontations. A scuffle with guards broke out last month at the dolphinarium in the Black Sea city of Batumi, but no such clashes have occurred at the Tbilisi zoo.

Animal-rights activist Temur Lachkepiani of the Georgian Federation for Animal Protection said his group was monitoring conditions for the animals. “Right now, [the] animals need a rehabilitation center, and not [a] new zoo,” he argued.

Other environmental and animal-rights activists interviewed by EurasiaNet.org did not identify any complaints about living conditions for the zoo’s animals. Green Alternative, a non-governmental environmental watchdog, said it would monitor construction of the new facility, but would focus its efforts on ensuring the new space adhered to urban-planning standards.