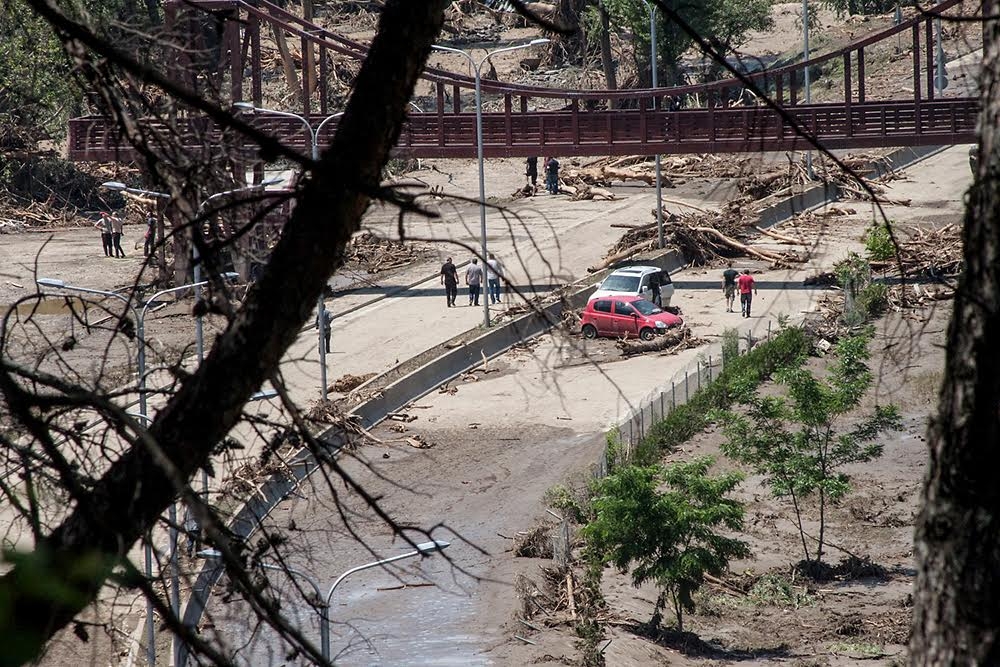 Rescue workers and police close to the Tbilisi zoo search through the rubble left behind by the June 13-14 flood that caused an estimated $120 million in damage to housing, infrastructure and the zoo. The flood took the lives of 19 people (plus three still missing), displaced 105 families, killed over half of the Tbilisi zoo’s population and damaged about 40 roads. (Photo: Justyna Mielnikiewicz)

No sooner had images of a hippopotamus lost on a central street in the Georgian capital of Tbilisi gone viral this summer than offers of financial help for recovery from the city’s June 13-14 flood began to pour in. Yet, today, with well over $8.3 million raised from a variety of sources, questions have surfaced about how transparently and effectively the government is managing the money.

Officially, the flood took the lives of 19 people, displaced 105 families, killed over half of the Tbilisi zoo’s population and damaged about 40 roads. A draft World Bank assessment EurasiaNet.org received from the Tbilisi city government estimates that a minimum of $119.3 million is needed for the reconstruction of housing, roads, bridges, water management and the zoo.

That sum amounts to roughly 3.6 percent of the country’s 2015 budget. Already, a budget reduction has been announced.

Yet no other general assessment of repair costs exists. For unclear reasons, the Tbilisi city government has not compiled its own. Tbilisi Deputy Mayor Dimitri Kumsishvili, however, said officials “do go deeper” when additional details are needed.

Such reliance on World Bank paperwork might seem strange for a country that heavily touts its ability, as an associate of the European Union and aspiring North Atlantic Treaty Organization member, to look out for itself. But it is not the only question about the flood-relief drive.

Out of the roughly 19.28 million laris ($8.31 million) raised to date, more than half comes from an organization and bank established by the heavily influential ex-prime minister Bidzina Ivanishvili, the billionaire founder of Georgia’s ruling Georgian Dream coalition.

Ivanishvili has stated that he will cover what the government and donors fail to provide.

That gap could be large. The presidential reserve fund, an account originally established to address natural disasters, contributed a mere 200,000 laris ($82,207); a government reserve fund chipped in another $778,879 (1.807 million laris). Reasons for the disparity have not been released.

Smaller funds also came from the governments of regions and towns with no connection to the Tbilisi flood zone, including from the exiled government of breakaway Abkhazia.

Corporate donations are not without their surprises, too. The privately owned national broadcaster Imedi, which saw an ownership dispute resolved under the Georgian Dream, made a 62,998 lari ($27,154) donation to the government’s flood-relief effort. An Imedi spokesperson did not respond to questions about the contribution.

Other private donors, however, are reluctant to put cash in the city’s common kitty.

Adrian Scoffham, the 37-year-old British co-founder of the Tbilisi-based non-profit Hippo Fund, says that the 20,000 lari (approximately $8,628) it has raised from t-shirt and bag sales will be used for direct forms of assistance to flood victims. “Georgian and foreign donors tend to mistrust local authorities,” Scoffham claimed.

The Fund, however, is currently coordinating with City Hall to avoid overlaps. Half of its funds will go to animal welfare.

Tbilisi local Maka Meshviliani, a 28-year-old senior program officer at the American-run National Democratic Institute, also has focused on DIY fundraising. She used the Indiegogo crowdfunding platform to raise more than $80,000 in a campaign “specifically independent from City Hall.”

Nonetheless, the government is not excluded entirely. Meshviliani is brainstorming with Lasha Abashidze, the elected head of the Tbilisi district most affected by the flood, and with a local non-profit, the Women’s Fund Georgia, for ways to use the money.

The city maintains that it is running an efficient operation, and eagerly promotes a site for flood-relief data and donations.

But, so far, only one local non-governmental organization, the International Society for Fair Elections and Democracy (ISFED), is monitoring the relief efforts. Their preliminary, July 23 report on the city’s assistance to homeless flood victims rates the government’s performance mostly positively.

The city says its priority has been to find solutions for the 48 families (147 people) who lost their homes altogether.

The standard form of compensation for houses lost in Georgia’s 2008 war with Russia was government-provided, privatized living space or $10,000 in cash. But the city has offered flood victims a choice between the supposed market value of their property and a usually lower “member value price,” a figure allegedly based on space and family size.

Kumsishvili calls it “an exceptional situation,” made possible by donations from “charities.”

So far, 30 families have accepted the compensation.

But here, too, questions have emerged about how the city calculated property values. In many cases, the compensation difference between the two choices is considerable, with no explanations offered to the public.

In one instance, an unnamed three-person family received sufficient market-based compensation – no amount stated – to purchase two apartments in the place of one.

Tbilisi Deputy Mayor Kumsishvili, though, stresses the accuracy of the appraisals, performed by the National Forensic Bureau, a government-run agency whose head is appointed by the prime minister.

Reasons for selecting the bureau, headed by a former deputy interior ministry inspection chief, were not provided. Kumsishvili, though, termed the bureau “the most reliable” body for the job. (In the United States, forensic agencies generally do not perform real-estate appraisals.)

Kumsishvili claimed that the agency had studied real-estate transactions over the past three years to arrive at a market price of around $450 per square meter for flood-damaged properties.

But Ilia Kevlishvili, a realtor for Privatservice Realty, says areas that were most devastated by the flood could carry a market value of “roughly $900” per square meter.

Tbilisi resident Maka Giorgidze, though, claims the city offered her $150 per square meter for her 1,200-square-meter house.

“But they didn’t say when they would pay. We have heard people in the city were collecting money to help people affected in the flood, but we haven’t seen any of it yet,” she said.

Giorgidze lost everything in the flood and is living with her family in an apartment rented by the city.

But the city maintains speedy payments to those who have lost property continue apace.

"There is no lack of money,” underlined Kumsishvili. “As soon as [those who lost property] say ‘OK, I agree with you,’ we will transfer the money."

Paul Rimple is a freelance reporter based in Tbilisi. Caucasus News Editor Elizabeth Owen added reporting to this story.