Georgia: The bishop, the art school and the conflict zone

With an art school and international animation festival, a Georgian Orthodox bishop is trying to revive a village on the de facto border with South Ossetia. 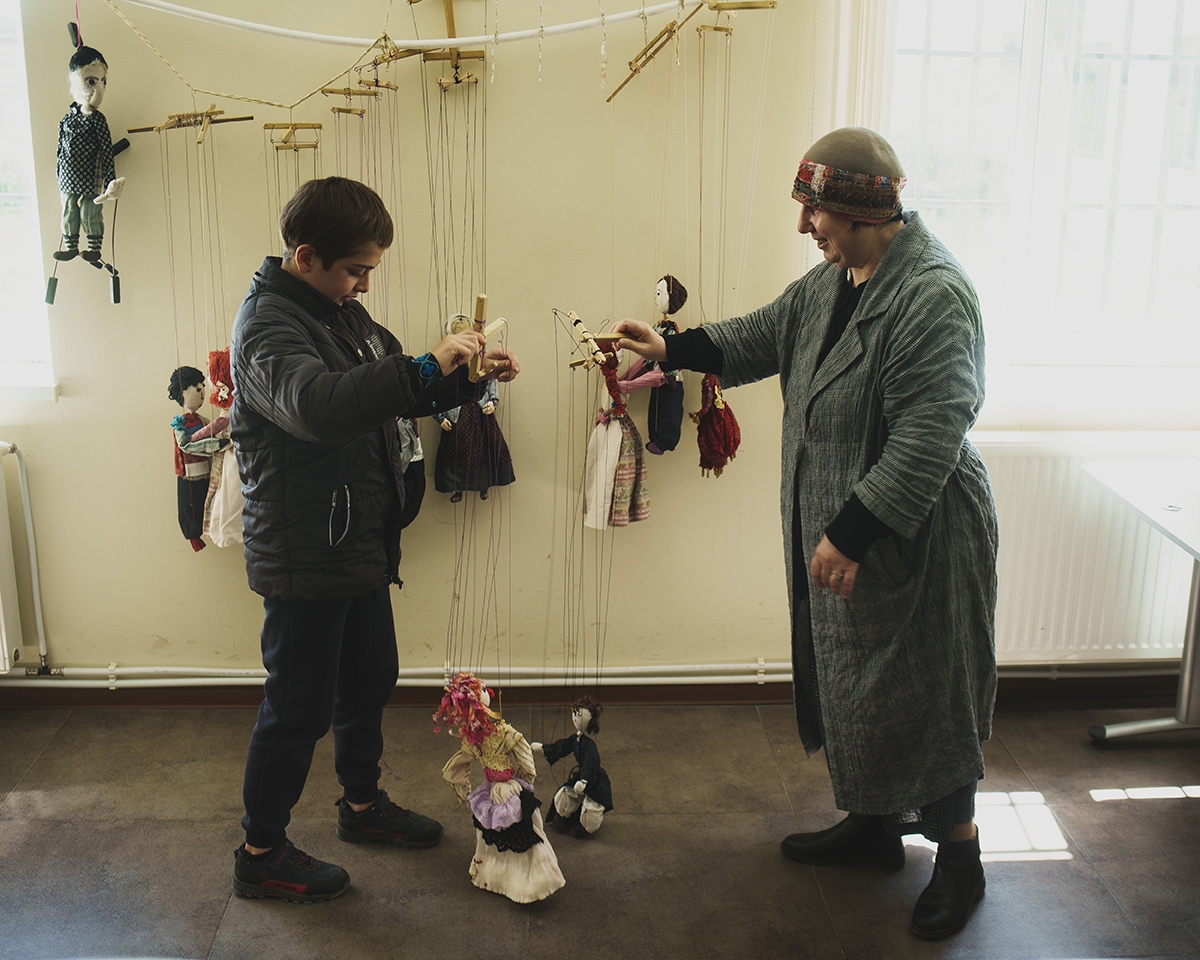 The Nikozi Art School offers local students a variety of courses after the end of the regular school day. (Julien Pebrel/MYOP)

In the village of Zemo Nikozi, reminders of the 2008 war are hard to hide. Walls are pocked by bullets and shrapnel; a unit of Georgian soldiers is stationed in the cemetery behind a barricade of tires. A few hundred meters north stands a post manned by Russian and South Ossetian armed forces.

The ongoing tension has exacerbated the exodus common to most rural areas in Georgia: According to census figures, the village’s population decreased from 1,053 in 2004 to 643 a decade later.

But help for Zemo Nikozi has come from an unlikely source. The region’s Georgian Orthodox bishop has established an art school and international animation festival in the village.

“Bishop Isaiah convinced us to stay in Nikozi for the kids’ education,” said one resident, Pelagia Gvaradze, 42, a mother of six. Gvaradze and her family were forced to flee from their home in a nearby village, Achabeti. But that village ended up on the other side of the de facto border that emerged following the 2008 war, so the family moved into her parents’ home – itself damaged in the war.

The family considered moving to the nearby city of Gori, where schools have a better reputation and where the government allocated them a cottage in a settlement for internally displaced people. But the presence of the art school convinced her to stay in Zemo Nikozi.

The Nikozi Art School offers local students a variety of courses after the end of the regular school day, in subjects including drawing, choreography, ceramics, piano, folk singing and instrumental music, literature, embroidery, and doll-making. There are also language courses in English and Russian, Bible study, and even indoor rock climbing.

“In Gori, I wouldn’t be able to afford enrolling even one of my children in a cultural activity, while here they have all been attending several courses every year, this is a big help,” Gvaradze said. “A lot of other families have stayed here thanks to the art school.”

The school’s biggest success story to date is Giorgi Magradze, who studied folk music at the Nikozi Art School and piano, before switching to the oboe and graduating from the Tbilisi State Conservatory and enrolling in a master’s program in Switzerland.

“It was at the Nikozi Art School that my teacher introduced me to classical music and the works of Bach and Mozart,” Magradze told Eurasianet. “Without the school, I wouldn’t have become a musician.”

“We can say that Giorgi reached the stars, but so did every other child as well,” Bishop Isaiah told Eurasianet. “The years spent in this art school will not disappear and maybe this place will remain a bright spot for them; it’s probably an even greater joy if the years spent here help someone in his or her critical moment of life.”

Isaiah –  born Zurab Tchanturia – tried and failed to enter Tbilisi State Academy of Arts in the early 1980s. After working several years in painting workshops, he managed to get hired at an animation studio led by renowned director Gela Kandelaki. Eventually he studied under Kandelaki at the Shota Rustaveli Theater and Film University’s animation program, but when he graduated it was 1993, the height of Georgia’s post-Soviet instability, and there were few options for an animator.

“If the events in our country had developed differently, I perhaps would have stayed in animation, my favorite field,” he said. Instead, he chose the religious life, joining a monastery in Abkhazia in 1993. He was forced to flee several months later, though, for a monastery near Tbilisi. In 1994 he officially became a monk, and the following year Patriarch Ilia II appointed him bishop of Nikozi and Tskhinvali.

He started educational programs informally in 2004 with drawing and reading groups, as well as animation workshops, but the 2008 war provided impetus (as well as foreign donor support) to develop them further. “I thank the war for its involuntary kindness,” Isaiah said. “War is destruction and many of our facilities were bombed, but it has brought us so much good as well.” 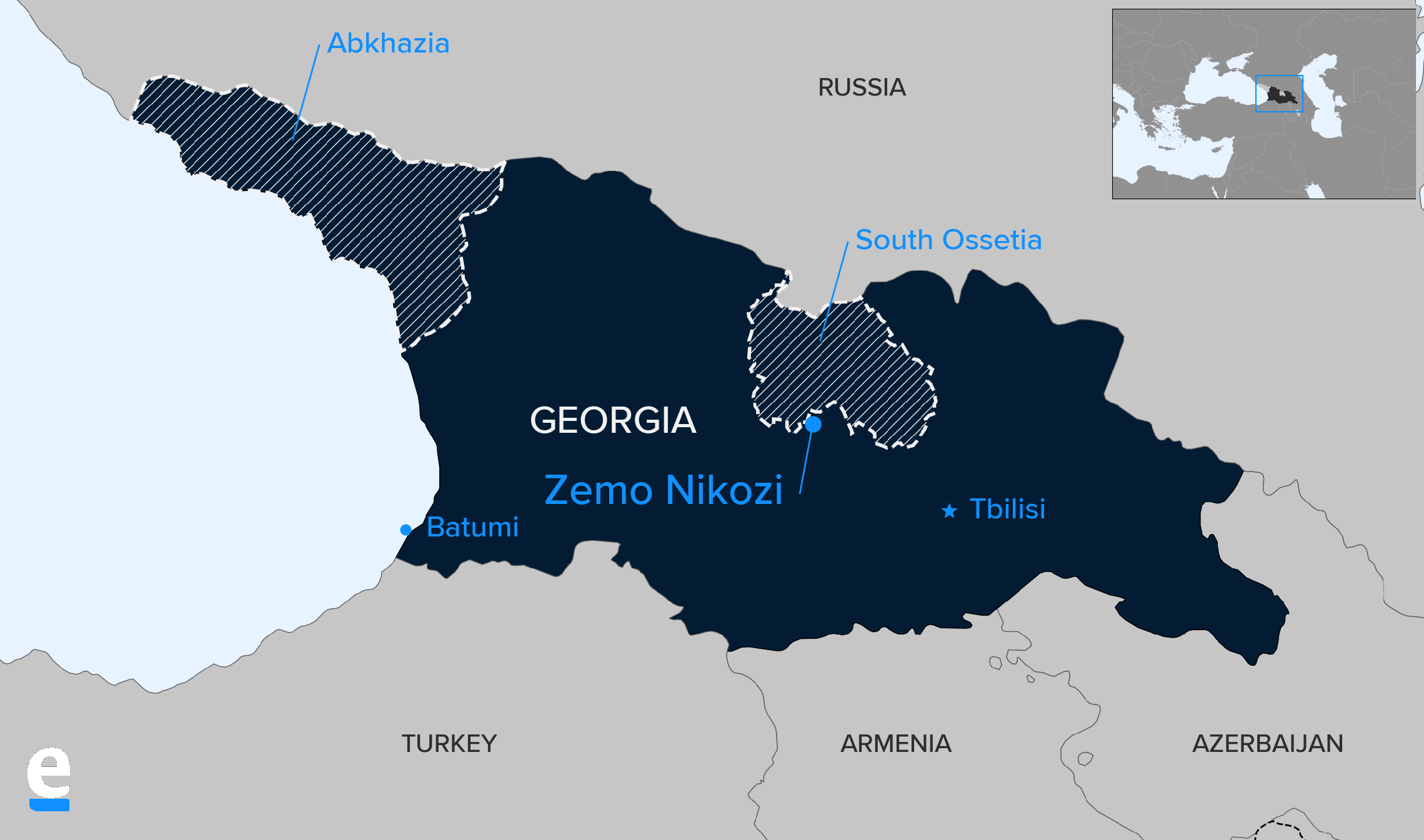 Isaiah started the art school in 2009, which he then followed up with the formation of the Nikozi International Animation Film Festival two years later.

The festival, despite its humble origins, quickly rose in international stature and now has ongoing partnerships with several major European festivals and academies.

“If I were the coordinator 10 years ago, I would think that it was really unimaginable to hold a festival in Nikozi because no one would be interested,” said Eter Glurjidze, 23, a graduate of the art school and now the coordinator of the animation festival. “But for each edition, the number of countries where guests were coming from was growing and growing.”

The festival may soon even have a modern new venue: a “Nikozi Art Palace” that will include an exhibition space, rehearsal studio, dining facilities and a 300-seat hall. The source of funding remains unclear, but former prime minister Giorgi Gakharia recently visited Nikozi and pledged 100,000 lari (about $32,000) to the effort. A tender for construction is expected to be announced soon.

The festival usually takes place in early September, but it was put off this year due to Georgia’s dire COVID situation. Isaiah, in the meantime, is working on his own short creative documentary about the war that he hopes will eventually be a feature-length film.

“Cultural activities are very close to spirituality,” Isaiah said. “Art is a field where you can build bridges between people and different cultures. […] I think this is one of the most valuable things I am doing in my practice.”

This story was produced with the support of the USC Center for Religion and Civic Culture, the John Templeton Foundation and Templeton Religion Trust. Opinions expressed do not necessarily reflect the views of these organizations.