A few months ago, the thought of taking a Chinese COVID vaccine was unthinkable to Georgians. Now it’s the norm. 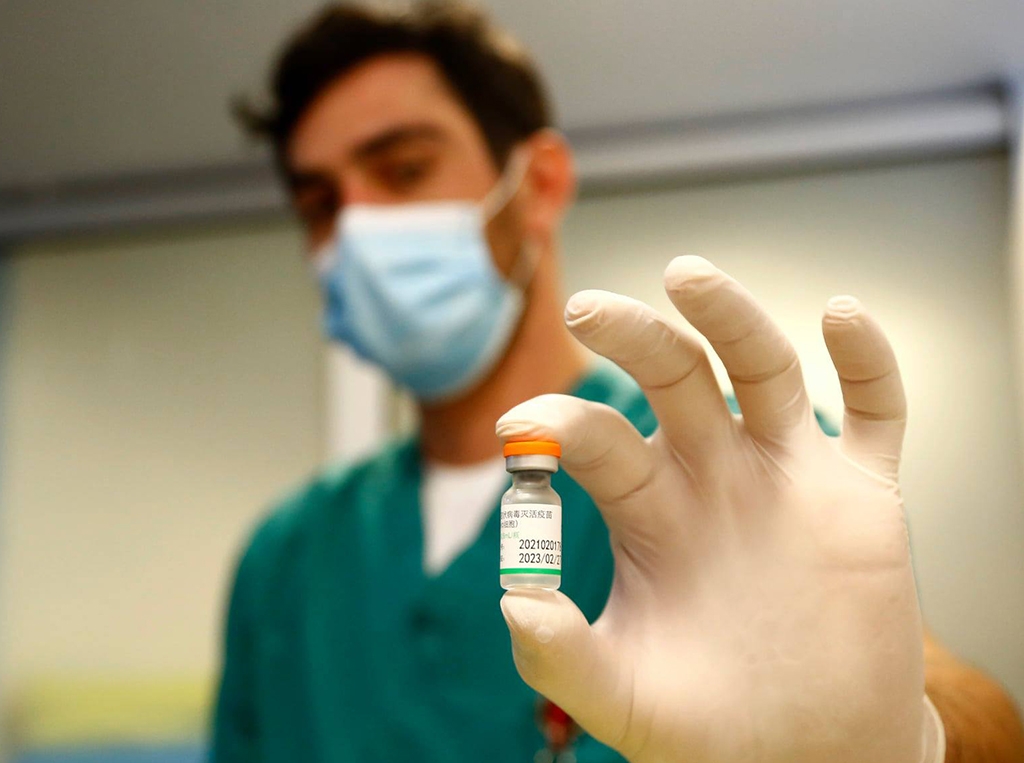 A vial of Sinopharm (photos by the Georgian Health Ministry)

Back in January, when Georgia was trying to procure COVID-19 vaccines for itself, one influential doctor suggested giving Chinese vaccines a shot. “Chinese vaccines are nothing to sneeze at,” Tengiz Tserstvadze, Georgia’s top infectious disease specialist, told reporters.

His words triggered a minor furor.

At that stage, the efficacy and safety of the Chinese vaccines had not been properly examined, let alone approved, by Western regulators. Georgians place their trust in the West on most matters, be it geopolitics, cars, or pharmaceuticals. And so a wave of criticism against Tserstvadze rolled across the news and social media.

From ordinary Georgians to healthcare professionals to opposition political figures, many accused the government of short-changing the public on the country’s most pressing healthcare issue. Health Minister Ekaterine Tikaridze insisted that the Chinese jabs were “categorically” out of the question and that Georgia was going to hold out for the best-performing and best-studied Western vaccines.

Fast forward to July: Chinese vaccines are essentially the only ones on offer in Georgia and people are lining up for a jab.

As promised, Georgia did begin its vaccine rollout with small amounts of American-German (Pfizer) and British-Swedish (AstraZeneca) shots. But with deeper-pocketed countries competing for these vaccines, Georgia got only a tiny share, which quickly ran out. Georgia then did what everybody else was doing in its neighborhood: it brought in the Chinese vaccines, Sinopharm and Sinovac.

Many began reluctantly getting the shots. “I signed up for a shot the moment it became available,” said Sopho Bukia, editor of the news website Jam News. Delays and disruptions in the distribution of Western vaccines forced her to settle for one of the Chinese jabs even though it lacked the imprimatur of the world’s leading healthcare authorities, she said.

“It was like you are on a battlefield trying to hide from a volley of arrows with whatever comes handy before someone gives you a proper shield,” she said.

As of July 8, over 62 percent of Georgia’s 111,589 fully vaccinated people had been inoculated with the Chinese jabs. The share is going to increase further as a million doses arrived on July 1. Meanwhile, Georgia is having a Waiting-for-Godot moment over a long-promised and constantly delayed million doses of Pfizer.

Reliance on Chinese vaccines has both geopolitical and healthcare implications. For all its Euro-Atlantic aspirations, in its vaccine quest Georgia got relegated to the global South, where China is leading the fight against the pandemic. The Chinese jabs also do little to improve Georgians’ international mobility because many Western countries, including the United States, do not accept Chinese vaccines and regard Georgia as a pandemic risk zone. The European Union also is not offering its newly created vaccine passports to travelers immunized with the Chinese and Russian jabs.

The other concern is an epidemiological one.

The World Health Organization did list Sinopharm and CoronaVac (Sinovac) for emergency use shortly after Georgia brought in these two vaccines. Compared to the leading Western alternatives, these two displayed lower efficacy rates against the coronavirus, but the listing contributed to Georgians’ greater acceptance of the shots.

“Before getting the shot, I had to see a stamp of approval by a respectable international health authority that is based in a democratic environment and can be held accountable for its choices,” said Nestan Andguladze, an elementary school teacher in Tbilisi. “The vaccines may have been fine to begin with, but I just can’t take an autocracy’s word for it.”

But there are stubborn questions about the Chinese vaccines’ real ability to fight both the original COVID-19 and its new variants.

When it comes to the Western vaccines, there is already a large body of evidence on their effectiveness as well as potential side effects. For instance, massive rollouts in Israel and the United States, followed by careful observation of vaccinated individuals, showed that the Pfizer vaccine’s real-life effectiveness in preventing hospitalization and death closely matched efficiency rates demonstrated during clinical trials.

The Chinese vaccines, by contrast, have not been extensively used and studied in wealthy countries with strong and transparent healthcare systems, and it is thus harder to verify their prowess. Major pandemic outbreaks in places heavily reliant on Chinese vaccines, like the Seychelles, Indonesia and Chile, have not done any favors to their reputation.

“It’s not that you can just log on the website of the [U.S.] Centers for Disease Control and check what’s the latest,” said one Georgian immunologist, who asked not to be named because of sensitivities associated with her role in the government’s pandemic response. “Instead, you glean and collate the data from studies that pop up here and there, and these studies have shown wildly divergent results.”

As a result, there is a lot of groping in the dark, said Irakli Vacharadze, a Georgian who has been actively tracking and publishing information about vaccines. “There is simply not enough quality data available to draw conclusions one way or another,” he said.

Vacharadze reluctantly took a shot of Sinovac as it was the only option available to him and the virus was creeping closer. “I’m vegetarian, but I will eat meat if you throw me into a pit with nothing but meat for two weeks,” he said, explaining his decision.

Although many view Chinese jabs as the poor man’s pandemic fix, they in fact cost Georgia more than the Western alternatives.

A vial of Sinopharm costs Georgia between $18-20, said Amiran Gamkrelidze, head of the National Center for Disease Control. “If memory serves, AstraZeneca cost us about $4-5 and Pfizer about $11-12,” he told reporters. Georgia, however, purchased AstraZeneca and Pfizer through COVAX, a WHO-backed mechanism for the equitable global distribution of vaccines, and that played a role in the pricing. Also, while China donated the initial 100,000 doses of Sinovac, Georgia paid for the latest million-dose shipment of the two Chinese vaccines.

When it comes to addressing vaccine hesitancy, Chinese jabs do have one PR advantage: They appeal to those on the fence about the newer technology employed in the Western vaccines.

Like many vaccines before them, Sinovac and Sinopharm deliver inactivated virus material into the human body to train it for an attack by the real virus. Most Western vaccines, though, use synthesized genetic material to teach the immune system to create antibodies. While widely hailed as an immunological breakthrough, the technology is a concern for some.

“It will take years and many studies to know the potential long-term effects of such new vaccines that were hastily created to address a global crisis,” said Veranika Ebralidze, a homemaker in Tbilisi who views the inactivated virus approach as tried and true. “In all other healthcare situations, I’d trust U.S. and U.K. over China, but in this particular case I’m leaning toward the traditional, well-studied technology used in the Chinese vaccines.”

Chinese or Western, the inoculation campaign is failing to catch up with the spread of the virus in Georgia. Daily infection and death numbers are on the rise again with most restrictions canceled and the dreaded Delta variant already in town. Herd immunity is still a distant prospect in the country of 3.7 million people, which has recorded a total of over 372,000 confirmed cases and only 111,600 fully immunized individuals.