Georgia: The Fur and the Fury at Tbilisi’s Opera 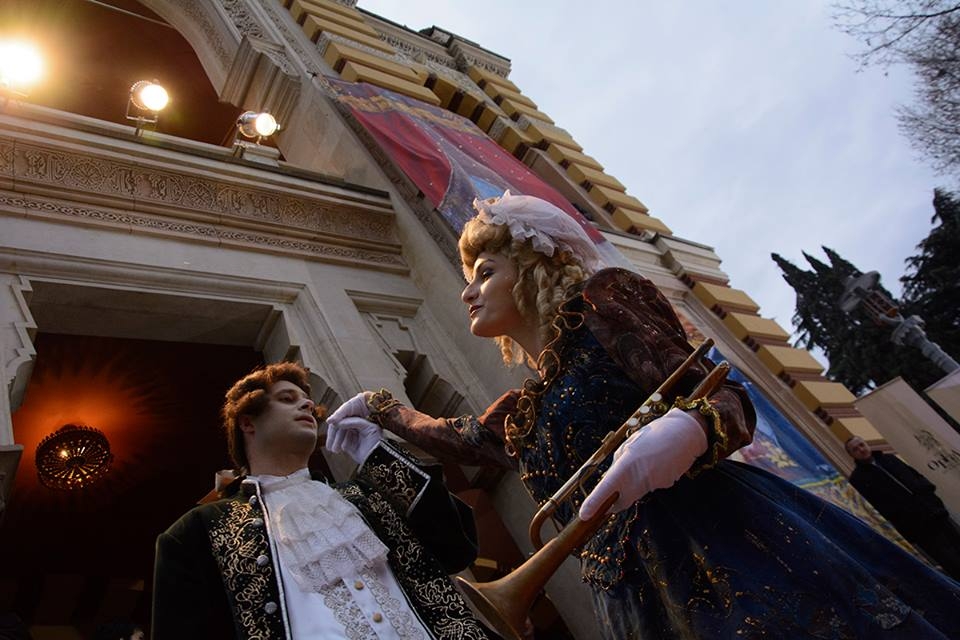 This past weekend’s reopening of Tbilisi’s neo-Moorish opera house after a six-year intermission ranks as Georgia’s cultural event of the year, but it also has provided a stage for a dispute over whether the country is reviving the elitism of the Soviet past.

Grand opera events may be a preserve for the rich and powerful elsewhere in the world, but in Georgia, where fascination with the opera long has cut across class lines, many were expecting a national celebration open to anyone who bought a ticket. It was not to be.

Though a state-run facility, the theater’s January 30 red-carpet opening was invitation-only.

How the invitation list was compiled was not clear, but the identity of the main sponsor of the estimated $40-million restoration certainly was — Kartu Group, a business and charitable concern founded by Bidzina Ivanishvili, onetime prime minister and longtime billionaire, seen as the country’s shadow leader.

Critics charge that that connection turned the season-opener performance of Georgian composer Zakaria Paliashvili’s “Abesalom and Eteri” into a partisan event that put the claustrophobically close-knit world of Georgian politics and far-reaching influence of Ivanishvili on display.

The billionaire in question, however, did not attend the opening. Prime Minister Giorgi Kvirikashvili, though, earlier had thanked Ivanishvili on national TV for underwriting the return of Georgian opera. As well he might.

Along with its many charities, Kartu Group is the pool of talent for cabinet appointments in Georgia; a relationship that the local chapter of anti-corruption watchdog Transparency International put into perspective in a 2015 study.*

Kvirikashvili and his predecessor, Irakli Gharibashvili, both once held executive positions within the company.

The controversy, though, went beyond Georgia’s ongoing political ruckus over Ivanishvili’s influence. The event revived memories of Soviet times, when such occasions provide a vanity fair for Communist Party big shots, their “fur coat-sporting wives” and conformist cultural figures.

This perception was exacerbated by an earlier snafu at the box office, when opera-lovers, including this correspondent, were told to check back later for leftover tickets.

“I guess I have to have someone make a call. Nothing changes in this country,” scoffed a woman in the line, referring to the Soviet-era practice of using personal connections to get access to anything from a major concert to a summer resort.

“Enough with closing the theaters . . . for the use of the nomenklatura and the select few,” declared journalist and rights activist Ninia Kakabadze, who called supporters via Facebook to come to a rally by the opera theatre on opening day.

Comments by the opera’s management that seats at the premiere were reserved for those who deserve it hardly helped matters. Neither did the look-at-me fur coats trotting into the marzipan-castle-like theater that night amidst 7-degree Celsius (46 degrees Fahrenheit) temperatures, and posing for photos.

Animal rights activists, of course, complained, but for Georgia intellectuals, who influence national discourse with their widely followed online commentary, the dead minks mainly symbolized a Soviet-style, new-money sense of entitlement and accomplishment.

Nonetheless, the return of Georgia’s major musical and architectural landmark is still a welcome event for local and visiting music lovers. After the fur coats are done with selfies and self-affirmation, they hope to set their foot in the opera house again.