Georgia: The Tbilisi Circus Comes with Conflict Resolution, Plus Clowns

Past armed conflicts over breakaway South Ossetia notwithstanding, a seven-man troupe of ethnic Ossetian trick-equestrians, the Ensemble Alania, was a Tbilisi-crowd favorite at a show this January. 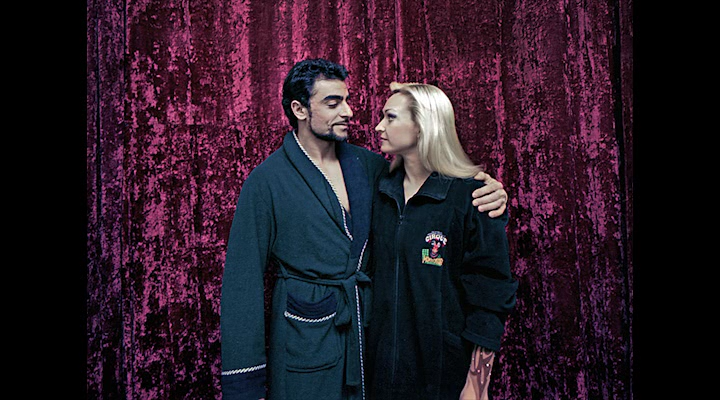 Hundreds of spectators drop their jaws and look up to watch a man suspended from the ceiling by his arms. His wife, suspended above him, steps on his head, then his back, and twirls him like a pinwheel as they slowly float down to the center of the ring.

Tbilisi’s 125-year-old circus is back in action, and its shows, playing to sell-out crowds, are proving that, for all the ethnic and geopolitical differences that split apart the Soviet Union, under the big top, circus performers remain part of one big family.

“Circus artists are not political,” commented 76-year old circus caretaker Arkady “Shekir” Parsadanishvili, who, in Soviet times, performed with a team of ethnic Uzbek, Georgian and North Caucasian “djigits” or stunt-horsemen. “They have no nationality.”

Instead, they have talent. Past armed conflicts over breakaway South Ossetia notwithstanding, a seven-man troupe of ethnic Ossetian trick-equestrians, the Ensemble Alania, was a Tbilisi-crowd favorite at a show this January.

"We worried how the Georgian public will meet us, an Ossetian team,” the group, whose members hail from throughout the Russian Federation, conceded on Facebook. A posted video indicates that all went well.

Their arrival even supposedly improved the health of retired rider Shekir. In a New Year’s Eve toast, he told the Ossetian riders that his blood pressure had normalized with their arrival in Tbilisi, and that his traumatized legs even seemed to hurt less.

Being a djigit is not about being “an acrobat on a horse,” commented ensemble member Arsen Batiyev, a 53-year circus veteran from North Ossetia, in the Russian Federation. It is about “character, temperament, style . . . the Caucasus.”

As elsewhere in the region, the civil unrest and economic crisis that followed the Soviet Union’s 1991 collapse dealt a blow to Georgia’s state-financed collective of circus artists, many of whom ended up retiring or moving abroad to work.

But although economic times, including in Georgia, may have improved, some aspects of the Soviet circus culture have now vanished.

Russian tiger tamer, Olga Denisova, whose father was a first-generation acrobatics instructor at the prestigious Moscow State Circus School, said the old-time family dynasties of circus virtuosos are starting to disappear as more athletes join the circus ranks. “They’re sport people and don’t know anything about the circus,” Denisova said.

The history of the Georgian circus goes back to 1888, when the big top went up as the first in a network of circuses set up throughout the then Russian Empire. After its original building burned down in 1911, the circus moved on to a wine factory, before setting up shop in 1939 inside its present neo-classical, Stalin-era home in central Tbilisi. The building’s 2,000-seat capacity ranked it among the largest circuses in the Soviet Union, alongside Moscow, Kyiv and Baku.

After the circus fell into disrepair during the 1990s, the late Georgian tycoon Badri Patarkatsiashvili bought the circus in 2003 and began extensive renovations, in what he claimed was a labor of love.

The circus closed in 2007 after Patarkatsiashvili backed protests against President Mikheil Saakashvili and was accused of conspiring to overthrow the government. It took Patarkatsiashvili’s sister, Mzia Tortladze, until New Year’s Eve 2011 to reopen the circus.

Political dynamics aside, the most difficult hurdle was gaining the respect of the circus world, commented General Director Levan Gagvishvili. “We, the management, have no circus background and weren’t trusted. But we established our reputation after the second show, which was with an international collective . . . ” Gagvishvili recounted.

That reputation is critical. The circus world is an underground society. Unlike professional athletes who become household names and gain corporate sponsorships, the glory for circus artists comes from recognition by their peers.

With that in mind, the circus’s new directors have a vision to put Tbilisi on the world circus map, and to invite more stars, including the acclaimed Cirque du Soleil.

The circus, though, remains an uphill struggle. Georgia’s moribund economic situation means that “tickets need to be cheap;” between 10 to 25 laris (about $6 to $15), Gagvishvili said. To make ends meet, the circus rents out its building for birthday parties and is looking into setting up a kindergarten, too.

But for celebrated clown Anton Pilossian, a native Tbilisian whose face adorns a series of Grenadine postage stamps of world-famous clowns, the circus is not a business, but an art.

The proof – not surprisingly, some observers might add with a wink – can be found in the Caucasus itself, where the art of performance, in all aspects of life, can run deep and strong.

“I was in Yerevan once and met a very big minister, [an] important man,” Pilossian recollected. “He said to me, ‘You know, deep down inside, I am a clown. Just don’t you tell anybody.’”