Georgia: There’s a Little Bit of Kyiv in Tbilisi 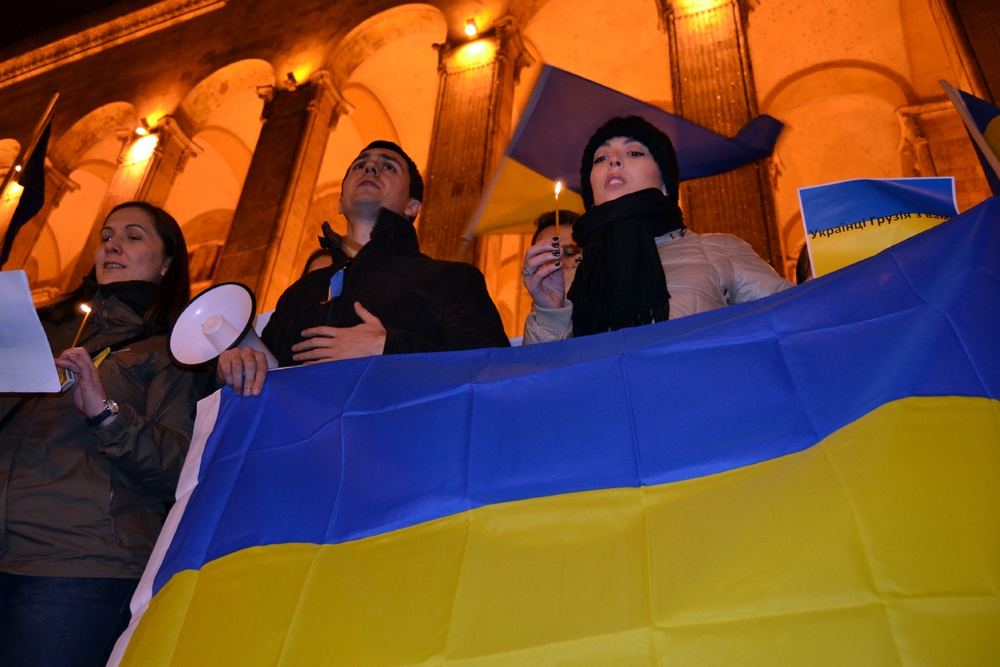 The Euromaidan movement may be centered in the Ukrainian capital Kyiv, but it enjoys strong support in the South Caucasus state of Georgia. For many in Tbilisi, there’s a feeling that as Ukraine goes, so follows Georgia.

“The fate of Georgia is also being decided in Ukraine,” asserted Tamar Gurchiani, a lawyer and rights activist who participated in a late January rally in downtown Tbilisi to honor four Ukrainians killed in the Kyiv protests.

Geopolitics is a major factor why so many Georgians feel a strong sense of solidarity with the Euromaidan movement, which seeks to force the resignation of Ukrainian President Viktor Yanukovich and break the country’s economic dependence on Russia. Georgia, like Ukraine, has been bedeviled by Russian political and economic muscle-flexing in the post-Soviet era.

On a governmental level, the two countries enjoyed a period of particularly close ties in the years after each country went through “color” revolutions: Ukraine’s former president , Victor Yushchenko, and Georgia’s erstwhile chief executive, Mikheil Saakashvili, supported each other’s attempts to keep Moscow at arm’s length. For example, after Russia in 2006 closed its markets to Georgia’s wine, mineral water, fruit and vegetables, many Georgian exports were redirected to Ukraine.

Georgians are now finding a variety of ways to show their support for Euromaidan. Pop star Sopo Nizharadze uploaded YouTube video of herself singing a rendition of the Ukrainian national anthem. Others have switched their Facebook profile photos to black in solidarity with the Ukrainian protesters. “Our countries have gone a long way to break with the Soviet past and align ourselves with the West, and today a lot is at stake for all of us,” said art critic Teo Khatiashvili, who was an organizer of the late-January pro-Euromaidan rally in Tbilisi.

The catalyst for the Euromaidan movement was Yanukovich’s sudden decision to back away from tighter trade and diplomatic ties with the European Union, and instead cast Ukraine’s economic lot with the Kremlin. Georgia, along with Moldova, opted for stronger relations with Brussels -- outlined in an EU association agreement.

Some in Tbilisi worry that if Yanukovich, with the help of Russian interests, succeeds in thwarting the Euromaidan movement, Russian leaders will try to apply increased pressure on Georgia in the hopes of upending Tbilisi’s EU aspirations. In December 2013, EU officials called for a final signature of the Association Agreement with Tbilisi “as soon as possible, and no later than the end of August 2014.” The earlier goal had been autumn 2014.

Georgian politicians, too, have started to circle the wagons. In a rare unanimous vote, parliament on January 23 passed a resolution on Ukraine critical of Russian meddling in the situation. “Now we have a situation [in Georgia] where major political forces are competing on who is more pro-Europe,” noted Kakha Gogolishvili, the director of EU Studies at the Georgian Foundation for Strategic and International Studies in Tbilisi.

Giorgi Mchedlishvili, a professor of international relations at the International Black Sea University in Tbilisi, said that while Vladimir Putin’s Kremlin may want to block Tbilisi from moving forward with an EU Association Agreement, there aren’t many instruments of pressure at the Russian leader’s disposal. “Georgia is significantly less divided than Ukraine on the issue of Western integration,” Mchedlishvili said. He added that Russia would have a hard time playing an “ethnic card” in Georgia, pointing to a 2013 survey by the Caucasus Research Resources Center that showed 83 percent of ethnic Georgians and 38 percent of ethnic minorities said they would vote in a referendum to join the EU. (The study did not provide the number of respondents in the sub-sample groups).

Because of its past embargos, Russia now lacks significant leverage over the Georgian economy. According to official data, just 7 percent of Georgia’s imports come from Russia. Ukraine and Russia both hold the same 7-percent weight for Georgian export markets. “We [in Georgia] are less dependent on Russia than [is] Ukraine,” Georgian Prime Minister Gharibashvili told CNBC on January 23.

In addition, Russia has already used up its geopolitical ace card, having recognized the independence of the breakaway entities of Abkhazia and South Ossetia.

But Georgia is not without its weak spots, namely widespread poverty and dependence on agriculture, which employs over half the country’s workforce. If Russia, a northern neighbor, changed tactics and invested in importing Georgian farm produce, many Georgians’ enthusiasm for the far-off EU might diminish, Gogolashvili suggested.

The Orthodox Christian faith and traditional values that Georgians and Russians share might emerge as another obstacle in Georgia’s EU path, Mchedlishvili believes. Campaigns against the EU policies concerning gay rights, accompanied by alarmist Russian TV reports, have aired in both Ukraine and Armenia, another state that has turned away from the EU. Such reports also have resonated in Georgia. Earlier this month, EU Ambassador to Georgia Philip Dimitrov warned that the main thrust of any campaign against Georgia’s EU integration could come via an assertion that the two do not share compatible values.-This article was amended on February 10, 2014 to correct Giorgi Mchedlishvili's place of employment from Ilia State University to the International Black Sea University.

Giorgi Lomsadze is a freelance journalist living in Georgia and the author of EurasiaNet.org's Tamada Tales blog.