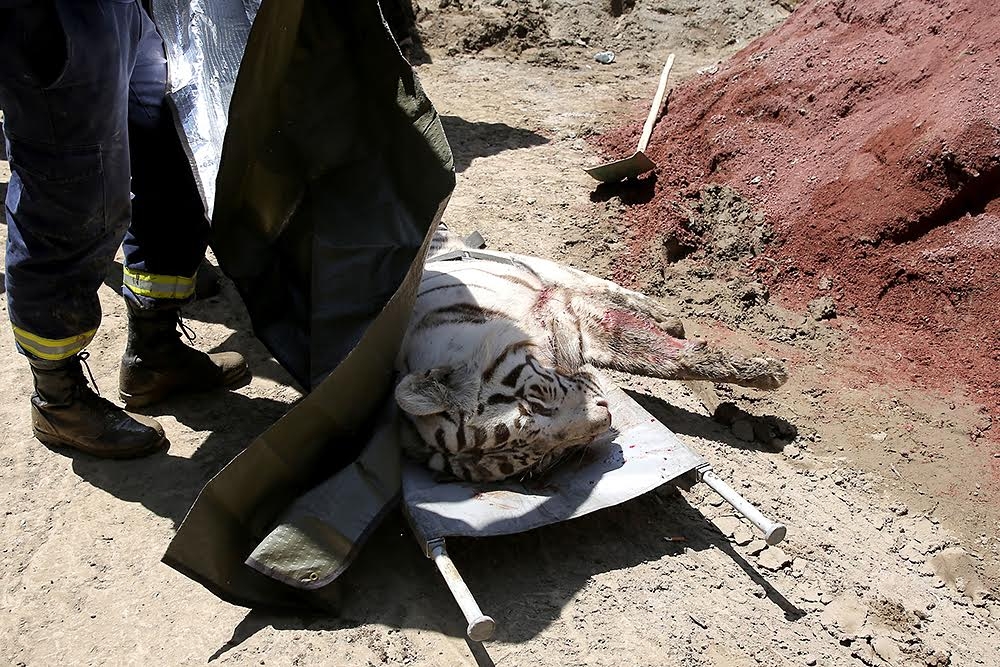 The white tiger that went missing on June 14 and attacked two men, one fatally, was shot dead by police in the Georgian capital, Tbilisi. City residents vented their anger at city and government officials, who just the day before assured residents there was no risk of an animal attack and it was safe to go back to the streets. (Photo: Georgian Ministry of the Internal Affairs)

First came the biblical flood that swamped the Tbilisi zoo, setting wild animals free to roam the streets of the Georgian capital. Now, three days after the inundation, a fatal tiger attack threatens to set off a political tempest.

Police could not confirm a reported sighting of another tiger in the upscale Tbilisi neighborhood of Vake, near the zoo. A government helicopter could be seen circling over central Tbilisi in the early evening as part of the search effort.

The tiger attack occurred June 17 in a warehouse not far from the zoo and next to the abandoned, downtown Laguna Vera swimming pool complex. Forty-three-year-old Otar Tsukhishvili, described as an owner of a space in the warehouse, suffered a severed carotid artery and was pronounced dead after being brought to Republican Hospital in central Tbilisi, according to local media reports.

Prior to the attack, witnesses reported seeing a tiger in the vicinity of the warehouse. Police were summoned and searched the surrounding area, but were unable to enter the building itself because the entrance was bolted shut. “Interior Ministry representatives could not enter the building since it was [behind] a lattice and its iron door was closed,” the Interior Ministry said in a statement.

Tsukhishvili apparently had a key to the warehouse entrance, and was mauled soon after opening the door, eyewitnesses told EurasiaNet.org.

A central figure in the unfolding criminal investigation appears to be Tbilisi Zoo Director Zurab Gurielidze, who has publically taken responsibility for providing information that earlier prompted government officials to tell the public there were no risks posed by at-large zoo animals.

In a statement to media, Gurielidze said that a small tiger and a hyena are still missing. Prosecutors are questioning Gurielidze and other zoo employees. “According to all the information that we had yesterday evening [June 16], no danger existed,” Gurielidze said in a television interview broadcast in the evening of June 17.

Self-organized volunteers, mostly young people, have been cleaning up the debris created by the flood, including near the warehouse where the fatal tiger attack occurred. Interviewed on June 17, volunteers expressed anger at what they described as the government’s poor response to the crisis.

“We have the world’s most idiotic government,” bristled volunteer Mariam Chitadze. “The prime minister is telling us that everything is fine, that we should all go back to normal life and that the biggest problem is bad traffic, and the tiger was right here, sitting behind a few boxes all along.”

Another clean-up volunteer, Natia Akhvlediani, believed the government was unfairly trying to make the zoo director a scapegoat. “It is government officials who are responsible for my safety, not zoo officials,” she said. “Perhaps we should also blame the tiger for not informing the police of its current location?”

Georgian users of the social network Facebook organized a protest, called for the evening of June 17, to express support for the embattled zoo director.

On the night when the flood hit, police shot dead many escaped predators, including lions and tigers, fearing for public safety. The bodies of drowned or shot animals were strewn around the city. An escaped hippo, found lumbering about the city, was safely herded back to the zoo.

One of the few surviving penguins reportedly followed the Mtkvari River south all the way to Georgia’s border with neighboring Azerbaijan; a distance of some 61 kilometers. Zoo spokesperson Mzia Sharashidze told NewsPost.ge that a crew has been dispatched to the border to confirm the reports.