Always seeking a balance between tradition and innovation, the tiny South Caucasus country of Georgia is experimenting again — this time by seeking to meld modern dance with folk dance. 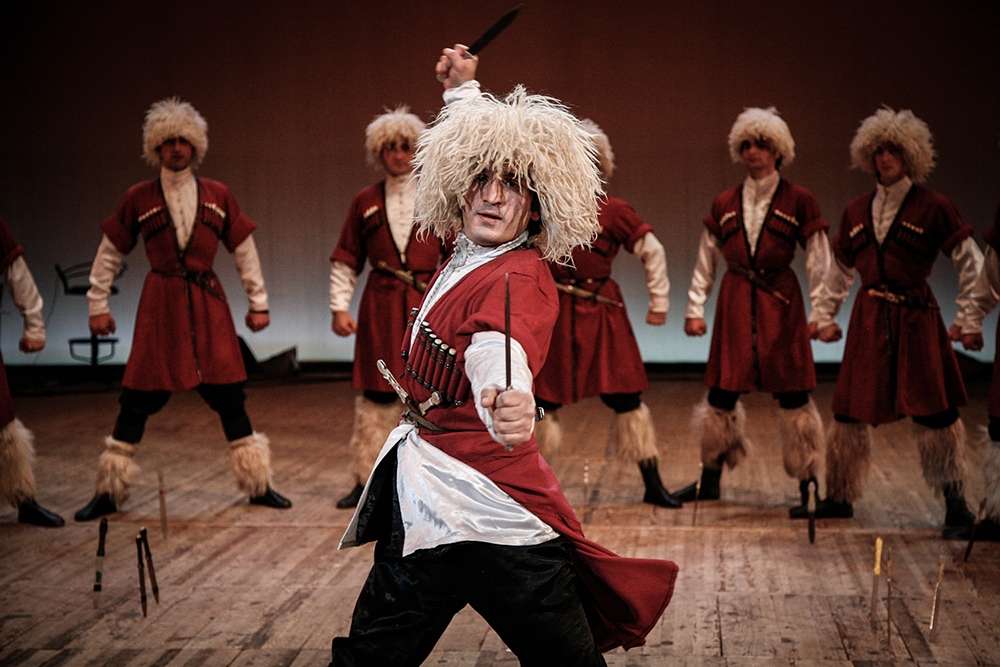 Three long-limbed, statuesque women swirl across the stage in red dresses. Their drooping sleeves slash the air. Their bleached, buzz-cut heads glow in the dim light.

Always seeking a balance between tradition and innovation, the tiny South Caucasus country of Georgia is experimenting again -- this time by seeking to meld modern dance with folk dance.

Unlike in the West, dance in Georgia is not the domain of the artistic few. Intricate, gravity-defying folk dances are a national obsession, a genre believed to show the country at its best.

It is contemporary – female dancers initially dance in flesh-colored leotards that make them appear topless – but “[i]ts accent and soul is [sic] very Georgian,” underlined Nino Sukhishvili, the company’s 50-year-old general director, who oversees the modern-dance project’s costumes and sets.

Men perform dizzying jumps and high-speed spins to a raging drumbeat or dance on their toes – the “repertory of twists, twirls and tumbles could put any modern break-dancer to the test,” The New York Times wrote in 1988, when the company first toured the US.

Women’s roles are far more demure, with much graceful gliding across the stage, but have evolved in recent years to include a military dance.

The modern-dance performance’s symbolic trio of dancers in red evolves from a folk dance for three women (Samaia) modeled on frescoes of Georgia’s medieval Queen Tamar, they note. Its finale, which features women in strapless black dresses with red targets on their chests, draws from the traditional military dance, Khorumi.

Nonetheless, “to be true to the folk roots of our dance and create something new” is “very difficult,” conceded Iliko Sukhishvili.

One American professional dancer agrees. Overall, modern dance’s “fluid movement is at odds with the strict pattern of most Georgian dance,” noted Mira Cook, a dancer with the New-York-City-based Battery Dance Company. In 2013, the New York troupe staged master-classes for Georgian dancers that emphasized improvisation and “breaking the rigid gender-conscious code that is typical of the Georgian dances.”

Breaking norms is a routine with which the Georgian National Ballet Sukhishvili is familiar. In the late 1920s, Nino Ramishvili danced with her later husband, Iliko Sukhishvili, in male national costume, whipping off her hat at the end to show the audience that she was a woman. The dance (Ilouri) has since become a standard performance.

Other innovations have included Latin dances, and a “folkotheque” experiment the company brought on stage in 2004 to combine Georgian and dance-club music. The experiment sparked Georgian youngsters to try out the moves themselves in Georgian discos, Nino Sukshishvili claimed.

How far most Georgian viewers are willing to go with this latest transformation of the company remains an open question, according to David Bukhrikidze, a theater critic at the news-monthly Liberali.

By “mixing traditional and electronic music as well as Georgian dance elements with modern ones,” the project “is bound to divide,” Bukhridze said.

The project is not the first modern-dance venture for Georgia, but traditionalists indeed frown upon it as non-Georgian, or simply bewildering.  “A confused jumble of movements, without a clear direction,” scoffed one 42-year-old woman. “I don’t see the point, really.”

The troupe’s “productions take a few years to get to people’s heart[s], but then they are there to stay,” said Darchia, who danced with the company for 28 years.

Such enthusiasm also can be seen among younger dance students in this ever-dancing country.

The modern-dance group’s creators, as well as participants, stress that they only welcome the debate. Said 20-year-old Tatia Ukleba, part of the Ramishvilebi’s symbolic trio of dancers in red, “healthy criticism makes you stronger.”