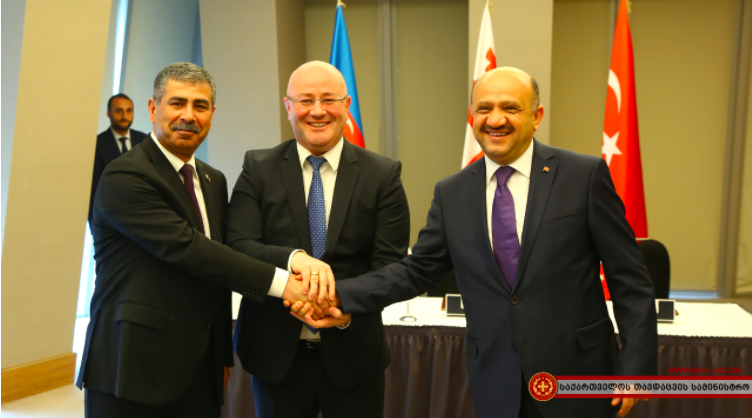 Regional cooperation endeavors often have a short shelf life in the post-Soviet world. But perhaps against the odds, Turkey-Azerbaijan-Georgia trilateral cooperation appears to have found a winning formula.

The trilateral format was inaugurated five years ago, and on May 23 the defense ministers of the three countries met in Georgia's Black Sea resort of Batumi, where they pledged to boost defense ties -- including widened joint military exercises and closer operational cooperation between the three militaries. The three countries also reportedly agreed to create additional mechanisms for mutual cooperation in the fields of military education and medicine.

The meeting took place against a backdrop of an emerging darker side of trilateral cooperation: Georgia has in recent months become an increasingly unwelcome home to Azerbaijani dissidents, and the day after the Batumi meeting the Georgian police arrested a Turkish teacher wanted at home on spurious charges of terrorism.

None of that, of course, was addressed at the defense ministerial, where the rosy future potential of the trilateral format was the focus of each minister's official remarks.

Turkish Defense Minister Fikri Işık noted that the three states enjoyed what he called “exemplary relations,” saying that he expected “new projects will be developed within the framework of the [Tripartitie Ministerial format].” Işık underscored the potential for major economic projects as an outgrowth of trilateral cooperation.

Georgian Defense Minister Levan Izoria also alluded to the ties between defense and economic cooperation: “We discussed the future of the [tripartite] format,” Izoria said. “We exchanged views on how to increase our cooperation to a higher level in order to facilitate the development of global projects in our region.”

Azerbaijani Defense Minister Colonel Zakir Hasanov echoed the sentiment of cooperation, saying that “joint exercises and operations between the armed forces of our countries facilitates the development of our countries."

Given the rapidly shifting regional political and security landscape in the Black Sea region, the continued development of South Caucasus trilateralism is certainly noteworthy. While it was a natural-seeming alliance when the trilateral format was first declared in 2012 -- between NATO member and EU-hopeful Turkey, Western-oriented stalwart Georgia, and canny "multi-vectored" Azerbaijan -- much has changed since.

The seemingly invincible United National Movement was ousted in Georgia, replaced by the increasingly invincible-seeming Georgian Dream. Azerbaijan's ruling party seems as firmly planted in power as ever, but the onetime hydrocarbon hope for the Euro-Atlantic increasingly looks like a Russian ally. And Turkey has gone from Moscow enthusiast to adversary and back again, all while slipping more and more towards autocracy.

Meanwhile, Russia is as dominant as it’s ever been, and the United States, once uniquely bullish on the region, appears to be beating a hasty retreat under the Trump White House.

However, despite the three countries’ evidently divergent strategic paths, shifting circumstances seem not to have undermined, but in fact bolstered, the basis for trilateral cooperation. Turkey’s internal fixations in the aftermath of the attempted 2016 coup, Azerbaijan’s security precarity over the disputed Nagorno Karabakh region, and Georgia’s extended isolation from the Euro-Atlantic West have all made preserving and expanding good relationships in the neighborhood all the more important. Similarly, while current relations towards traditional regional power Russia sharply vary in Ankara, Baku, and Tbilisi, there is nonetheless a genuine underlying skepticism towards Moscow in all three capitals. Even in Turkey, which has sought to rapidly restore ties with Russia after last July’s coup attempt, lingering suspicions of Russia’s intentions and regional designs sit just below the surface.

Ultimately, the key to South Caucasus trilateralism’s relative success might be its stark detachment from notions of ideological, civilizational, or even necessarily geopolitical fraternity from the very beginning. Instead, the grouping is unsentimental and pragmatic. Trilateralism might be better thought of a formal platform representing a critical mass of interdependencies that emerged after years of successful cross-border transactions between the three states. Unlike other regional groupings developed more explicitly as vehicles for balancing Russia, like GUAM (and back again?) and the so-called Community of Democratic Choice, trilateralism is less motivated by professed values and more explicitly concerned with concrete, shared interests -- most explicitly represented by the cords of energy and transport infrastructure tying the three states, such as the Baku-Tbilisi-Kars pipeline, but other shared security (such as pipeline protection and counterterrorism), political, and economic elements as well.

This hard-nosed approach has been the key to the grouping’s continued relevance, but it has also hamstrung efforts to elevate the platform into a more robust alliance. The first few years of the trilateral platform raised hopes that the three states could use the foundation of their economic and strategic convergence to forge a common, inclusive vision for the region. Heady talk from the three countries’ defense ministers suggest this is still a possibility, and the long delayed opening of the Baku-Tbilisi-Kars railway could inject fresh vigor into the trilateral partnership -- but years of widening strategic drift make it a tall prospect.