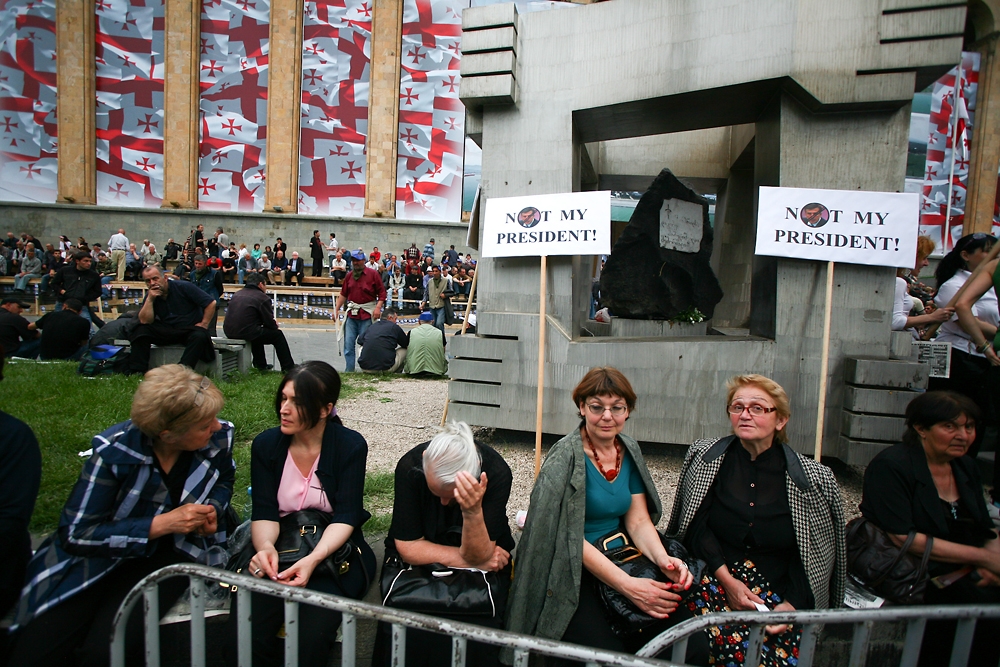 Protesters gather early in the evening to listen to opposition leaders call for the resignation of the Georgian president. 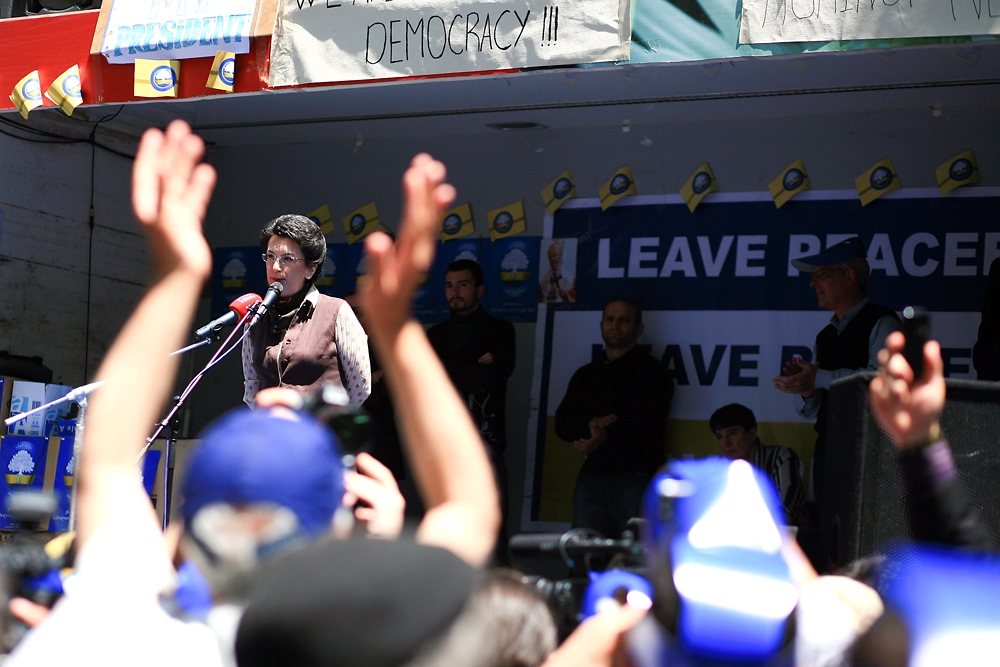 Opposition leader Nino Burjanadze speaks from a mobile stage on the last day of the authorized rally in the middle of Tbilisi. 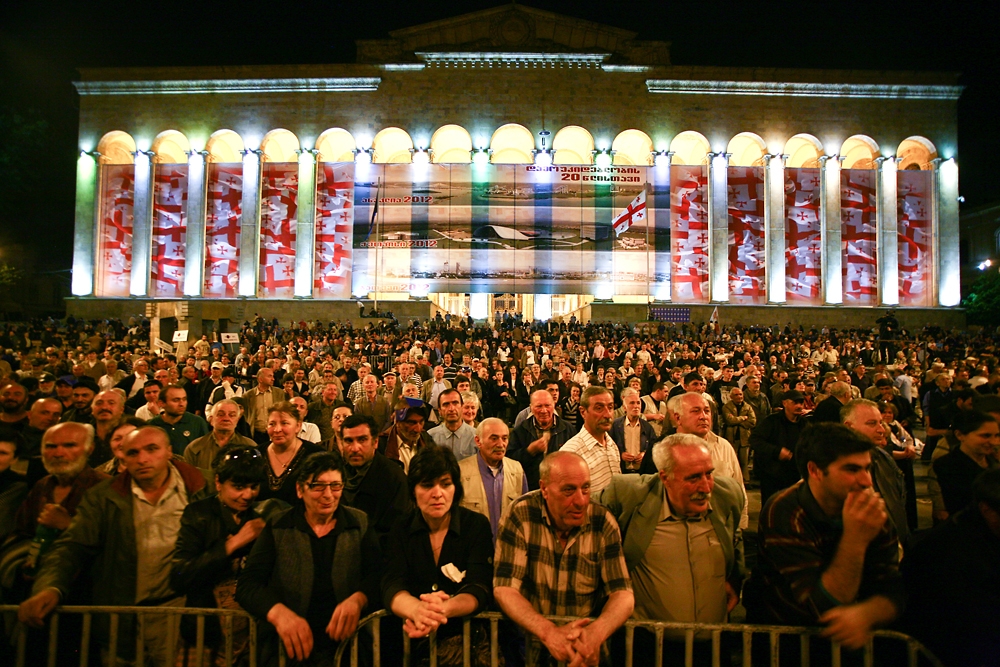 Up to 2,000 protesters gathered in front of the parliament building by the end of the day. 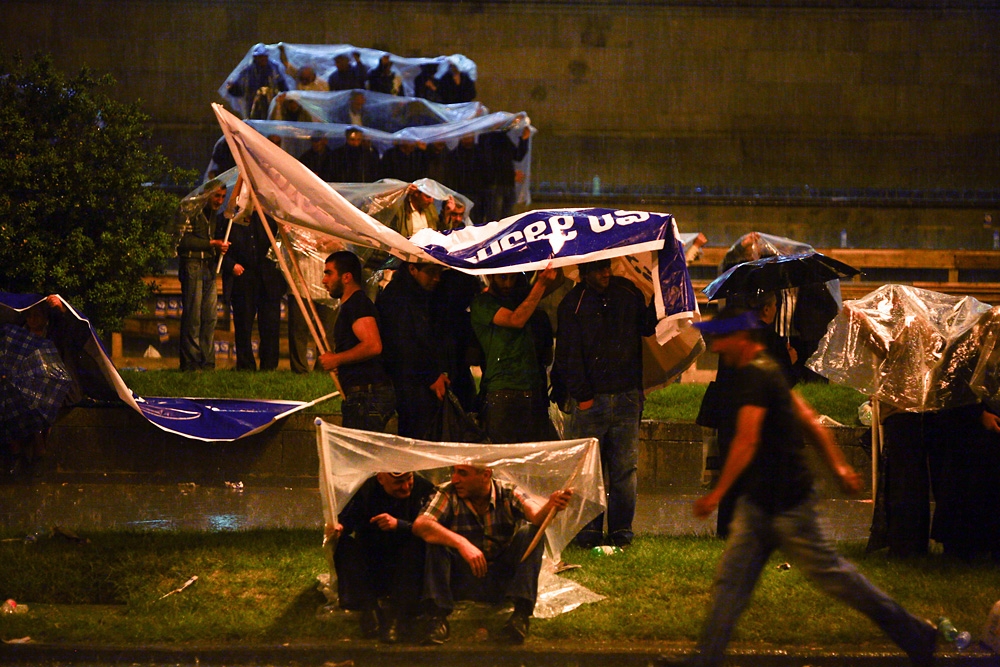 Unexpected showers made some protesters leave. However most of them stayed. 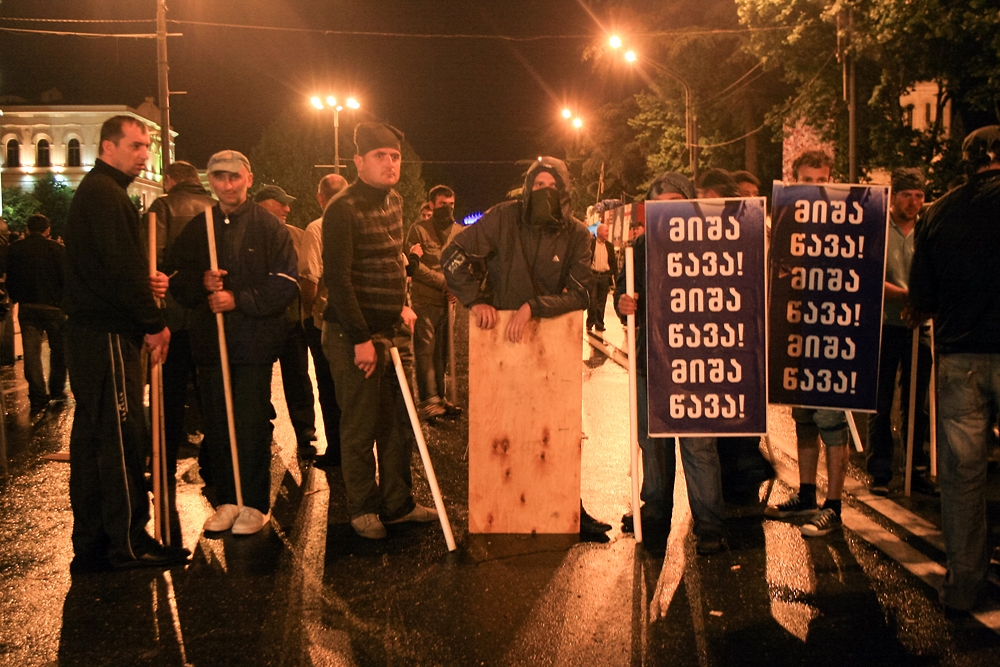 By midnight, young protesters armed with clubs lined up to confront riot police. 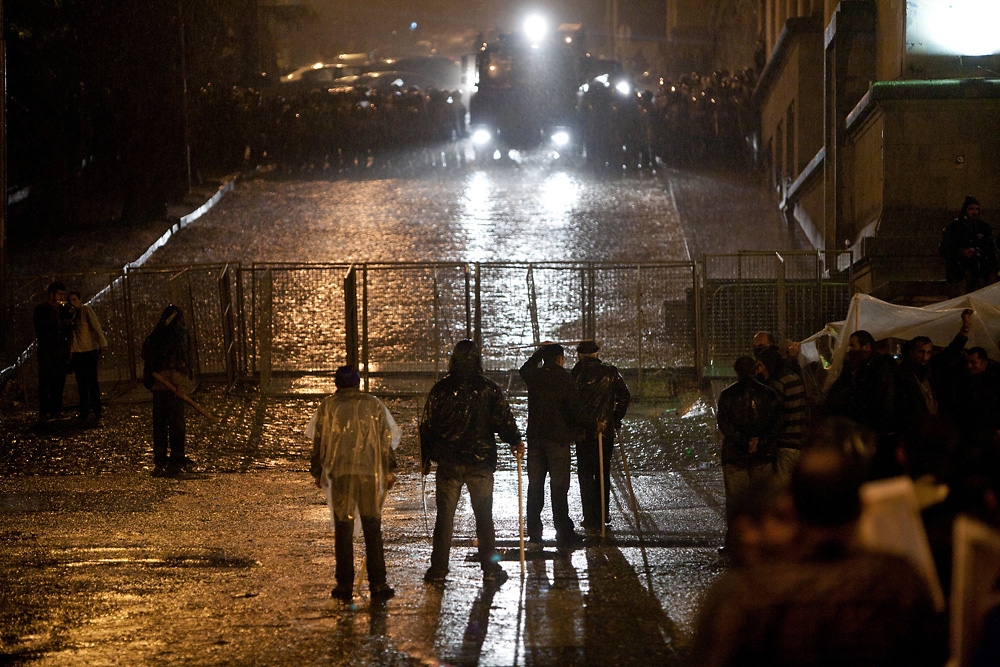 Back streets around the parliament building were packed with riot police, blocking the protesters from every direction. 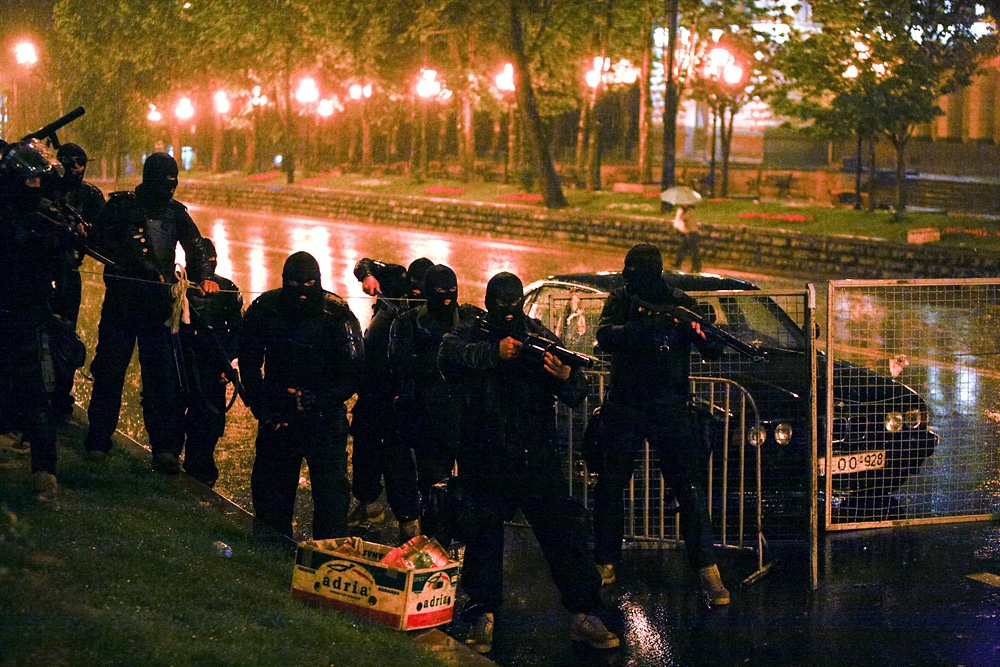 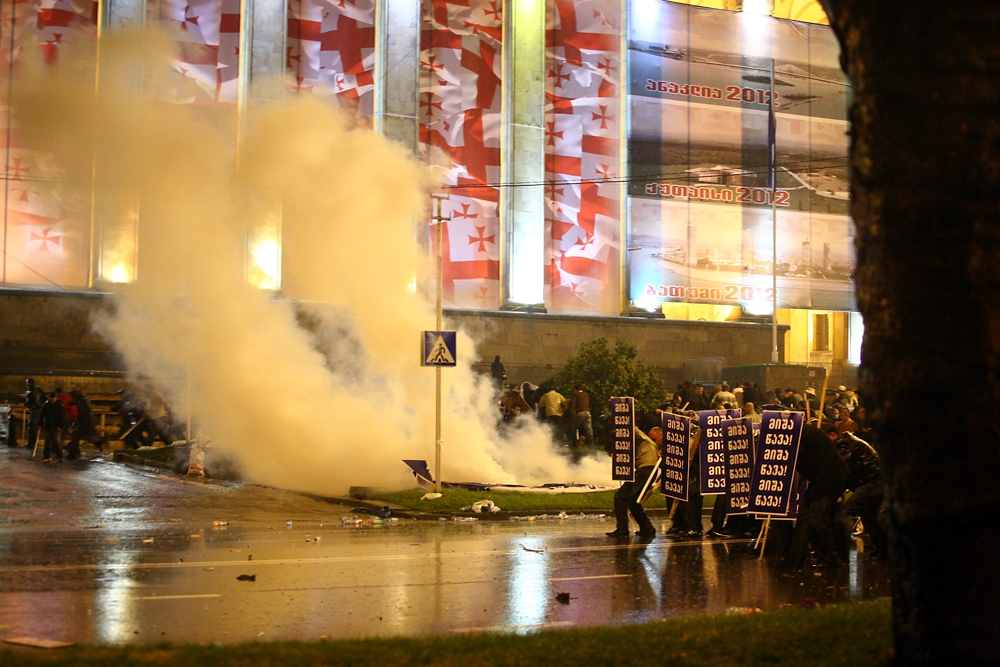 Protesters use homemade shields to protect themselves from rubber bullets. 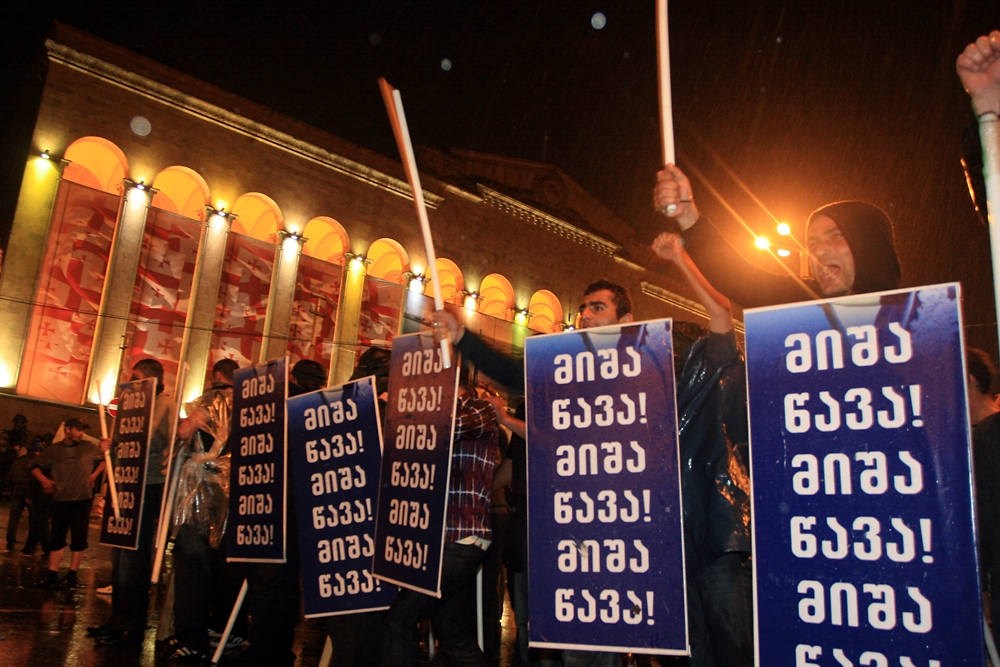 Protesters wave clubs and drum on their shields while shouting at the police. 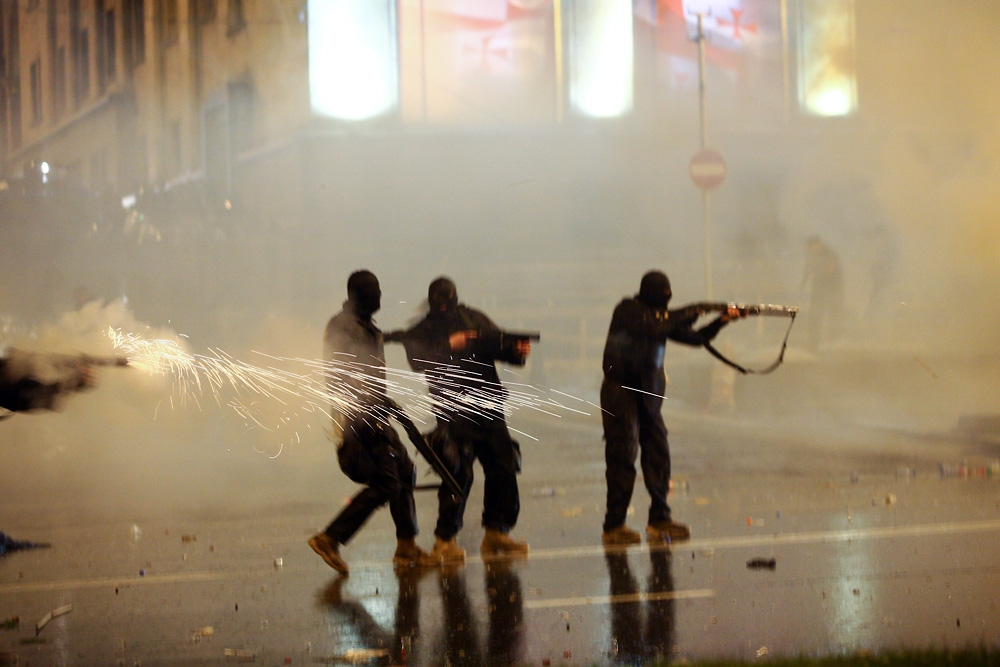 Riot police forces use rubber bullets to suppress the protesters. 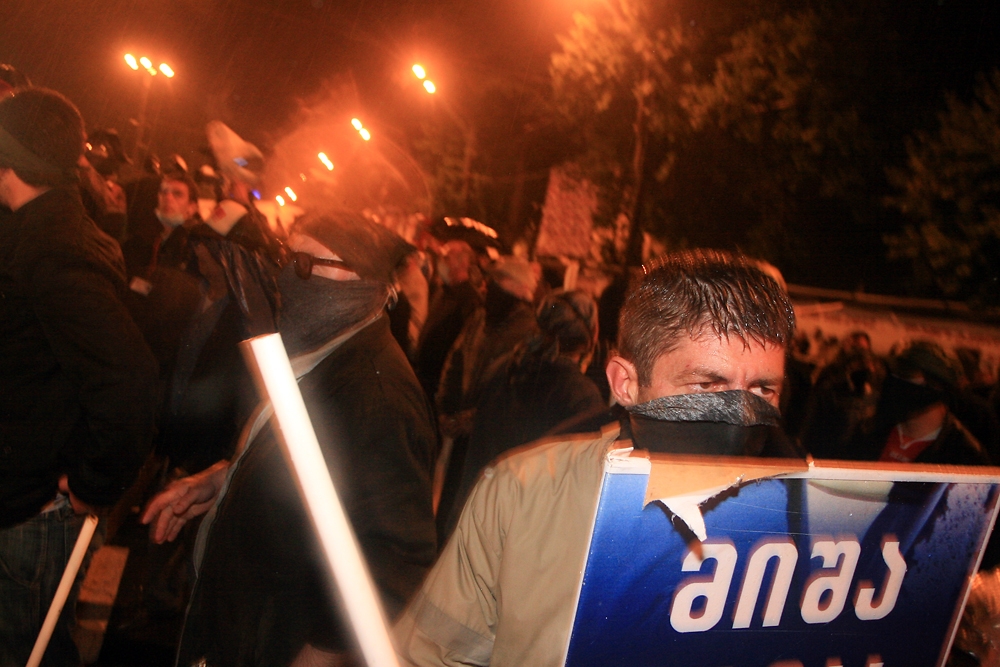 A protester prepares to confront the riot police. 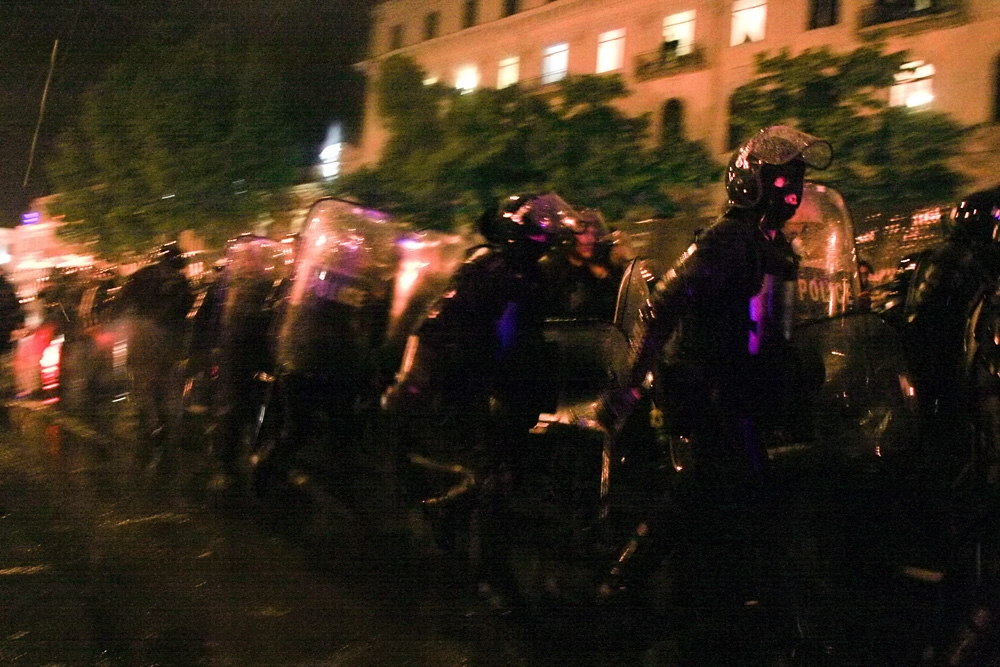 As the clashes subside, riot police begin to leave the area. 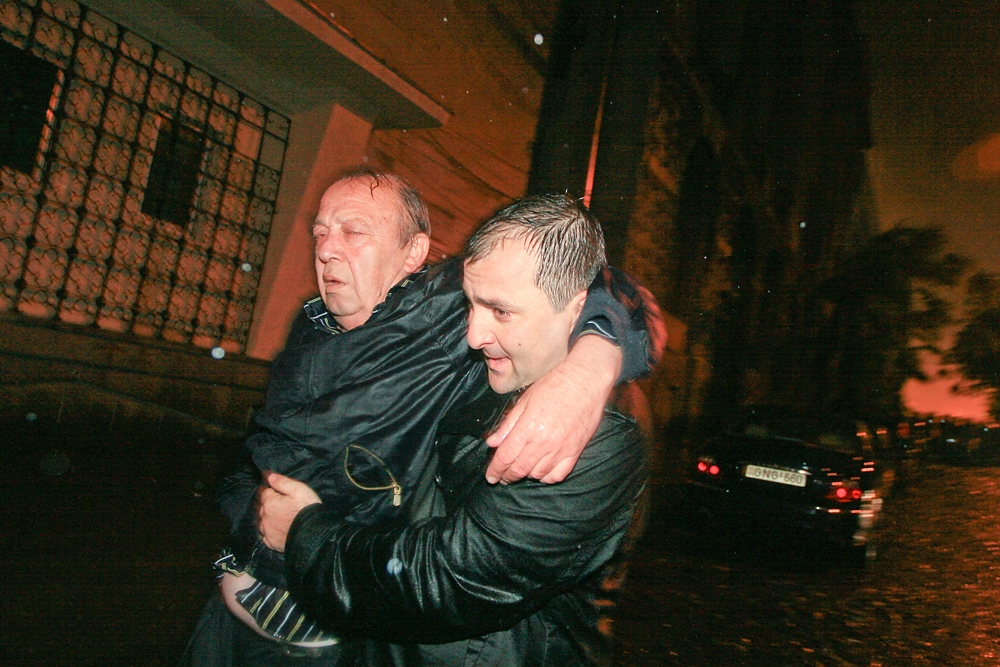 An injured protestor is helped from the scene. 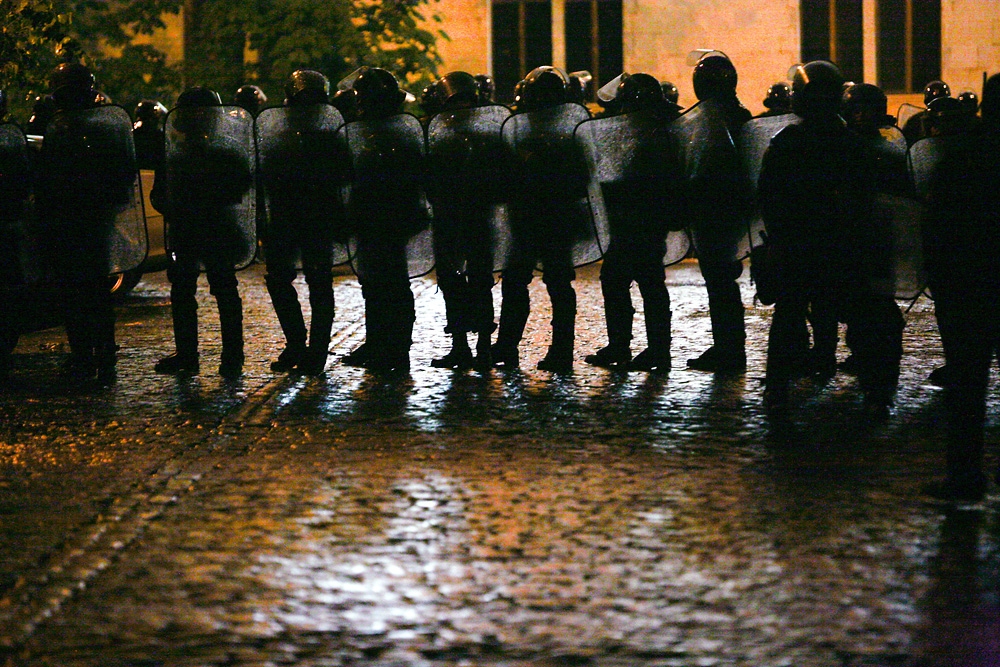 Within half an hour the front of the parliament building was cleared of government opposition protestors.
prev
next

The deaths of a police officer and a demonstrator amid the break-up of a Tbilisi street protest on May 26 have opened a grim, new chapter Georgia’s political struggle between the government and its critics.

The trouble began shortly after midnight, when riot police moved to break up the protest by using water cannon in a driving rainstorm. Authorities also fired rubber bullets and tear gas to disperse a few hundred protesters on the Georgian capital’s main thoroughfare, Rustaveli Avenue. The demonstration was organized by former parliament speaker Nino Burjanadze, who is now one of President Mikheil Saakashvili’s most outspoken critics. Demonstrators had earlier vowed to occupy a portion of Rustaveli Avenue in front of the country’s parliament building with the intention of disrupting the government’s planned May 26 Independence Day parade.

A melee ensued when riot police took action to break up the protest. Video footage shows some protesters armed with plastic poles clashing with police, while others, armed with posters, were chased by police, and beaten with clubs. Overall, eight police officers and some 37 “civilians” suffered injuries during the protest break-up. Some 90 protesters were reportedly detained. Some journalists covering the event also were reportedly injured and/or arrested.

The New York City-based Human Rights Watch condemned the police response as “excessive,” while US Ambassador Robert Bass has called for an investigation into how police handled the operation, as well as into the violent response of some protesters.

Within Georgia, media coverage focused on the deaths of police officer Vladimer Masurashvili and 54-year-old Nodar Tsakadadze. Pro-government TV outlets claim Tsakadadze was hit and killed by Burjanadze’s “escort” of cars as it sped away from riot police. Video footage aired to support the hit-and-run claim appeared inconclusive.

Interior Ministry spokesperson Shota Utiashvili told EurasiaNet.org that neither Burjanadze, her husband, ex-border police chief Badri Bitsadze, nor their son, Andzor, were the focus of a criminal investigation in connection with the deaths since “they were not driving the car.”

Utiashvili said that an investigation into the two men’s deaths was ongoing. He maintained, however, that the police had responded adequately to a “violent protest.”

“We don’t believe it was excessive force. They were very violent protesters with a clear intent to resist police,” he said. “If there were isolated incidents of excessive force, we will investigate them.”

“The police reaction should have been more measured,” said Gogia. “If the purpose was to disperse, then there is no need to beat people when they are running away.”

Speaking with reporters after the May 26 military parade, US Ambassador Bass commented that the events indicated “why, frankly, violence is not the solution to these challenges, and it is not an appropriate way to debate the best solution to the challenges that Georgia faces.”

Among the protesters, he said, were some individuals “not interested in peacefully protesting, but [people who] were looking to spark a violent confrontation.”

Before the confrontation with police, muscular young men with plastic poles – and the occasional baseball bat – could be spotted circling the area designated for opposition speakers, scanning audience members for suspected police infiltrators. Metal gates had been erected around the stand’s immediate vicinity to ward off police.

In his official Independence Day speech, President Mikheil Saakashvili implied that Russia was involved in the ill-fated demonstration organized by Burjanadze – an impression fed by Burjanadze’s post-war “public diplomacy” trips to Moscow for meetings with Russian leaders.

“These people, these political leaders with their small groups, wanted to raise a hand against Georgian democracy,” Saakashvili said in his speech in reference to the past five days of opposition protests in Tbilisi. “Instead of wanting freedom of speech, they, in fact, want violence.”

Moscow, Saakashvili claimed, was seeking retaliation against the Georgian army for making “them suffer more damage than they have suffered for dozens of years on any front or during any intervention.”

“That’s why our country’s occupant has chosen this day as a target,” concluded Saakashvili, according to an English-language translation of the speech posted on Civil.ge

In an apparent attempt to reinforce that message, the pro-government television station Rustavi2 broadcast a recording of an alleged phone conversation between Burjanadze and her son about chances for a successful armed uprising and the degree of Georgian support for better ties with Russia. The government routinely uses such purported recordings to strengthen public support for its position in various criminal cases and political fights. No legal justification was provided for why Burjanadze’s phone conversations had been under surveillance.

Burjanadze earlier supposedly broke with fellow opposition Georgia Party over suspicions that violence – and Russia’s assistance -- would mark the return from exile of party leader Irakli Okruashvili, another onetime Saakashvili confidante and a former defense minister. In remarks to supporters on May 25, Burjanadze, a two-time acting president of Georgia and former vice-president of the Organization for Security and Cooperation in Europe’s Parliamentary Assembly, urged protesters to show restraint and not to yield to “provocations.”

Burjanadze asserted late on May 26 that her struggle against the government will continue, but political analyst Tina Gogheliani noted that the deaths and violence that followed the end of the Rustaveli Street protest seems to have severely damaged the former parliamentary speaker’s image. “They made a miscalculation,” Gogheliani said, referring to Burjanadze and her followers. “It is a very serious mistake.”