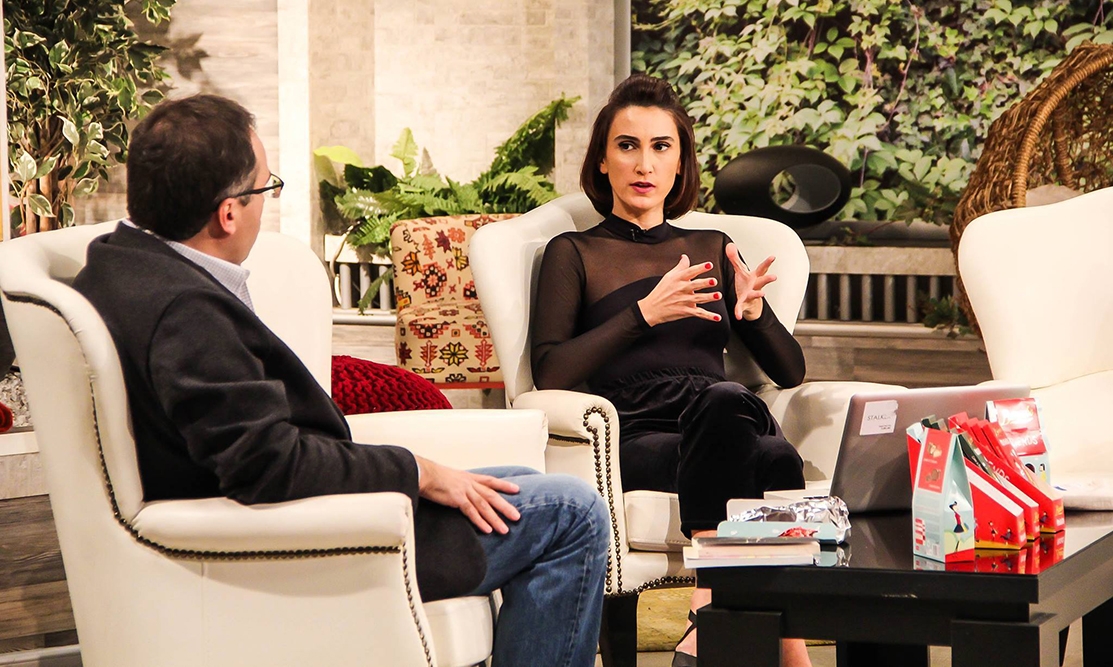 A still from “Strength is in Europe,” a US-funded segment of a weekly TV news program

Using means like television programs, fact-checking websites, and book clubs, the United States government is combatting what it sees as a Russia-directed disinformation campaign aimed at getting Georgians to abandon their Western geopolitical orientation.

These efforts began in earnest about two years ago, and are gathering momentum as Washington devotes more and more resources to countering anti-Western and anti-liberal narratives around the post-Soviet space.

The US Embassy in Tbilisi has just awarded its largest anti-misinformation grant to date, for a $250,000 project to work with Georgian government officials on improving “official messaging promoting Georgia’s Euro-Atlantic integration with Georgian public.”

As Georgia has solidified its links with the European Union – including a free trade agreement and a visa-free travel regime – conservative elements in Georgia, including populist political groups and tabloid media, have led a backlash. They argue that ties with Europe are harmful to Georgia's economy and its traditional cultural values. They also are portraying the West as a fair-weather friend to Georgia, and that Russian hegemony is, ultimately, an unavoidable reality.

The emergence of that narrative poses a geopolitical threat to Washington and Brussels, many Western officials believe.

“Where it becomes counter to our broader interests is when it's designed to get people to give up their stated aspirations to become a Western country and not a Eurasian country, and that's where we have to help them,” a senior American official told Eurasianet.org on condition of anonymity.

The current American-supported efforts cover a broad range of strategies. The US funds two fact-checking websites, mythdetector.ge and factcheck.ge, which scour the Georgian media for anti-Western misinformation and attempt to debunk it.  The US Agency for International Development (USAID) funds a segment on a weekly television news program, called “Strength is in Europe,” with four well-known public intellectuals discussing myths about Georgia's growing ties with the European Union. USAID has even funded a series of book clubs around the country in which participants read and discuss journalist Peter Pomerantsev's memoir of working in Russian television, Nothing Is True and Everything Is Possible.

All this has already had an effect, said Nodar Tangiashvili, an official at the East-West Management Institute, the USAID contractor implementing many of the counter-disinformation programs. “Even one year ago, no one talked about propaganda in Georgia. Now everyone is talking about it,” he said, pointing to a recent poll by the National Democratic Institute showing that 47 percent of Georgians believed that Russia was spreading propaganda in the country.

“What we managed is to mainstream this in the media,” Tangiashvili said.

The new grant, which will be administered by the Georgian Center for Security and Development, will strengthen the Georgian government's strategic communications ability, working particularly to coordinate messaging from the ministries of Defense, Foreign Affairs, Euro-Atlantic Integration, and the prime minister's office.

For now, the government's strategic messaging is led by the Euro-Atlantic Integration Ministry.

“The main message of Russian propaganda in Georgia is that the EU and NATO are unreachable goals. And everything comes down from that,” said Tornike Nozadze, head of the ministry's Strategic Communications Department.

“It's all about the lies. Russia was never, ever our friend,” Nozadze said. He holds regular meetings with other government officials and civil society groups to discuss Russian disinformation and the government's response. “I start my meetings with the very first question, 'Can anyone in this room tell me one thing Russia did for Georgia that was good. One single thing.' And people are in shock with this question, because there is none.”

Much of the focus of the pro-Western campaigning is in rural areas, where people are thought to be particularly vulnerable to anti-Western messaging. In comparison to bustling Tbilisi, rural areas struggle economically and have seen little benefit to Western integration so far. In addition, many ethnic minorities, particularly Armenians and Azeris, tend not to speak Georgian and so are more likely to watch Russian television. “In Tbilisi, resistance [to anti-Western messaging] is very strong, but if you go to the regions, it's different,” said Kornely Kakachia, director of the Georgian Institute of Politics.

“We've done a lot of outreach to the Armenian community, they're the ones who poll the lowest in terms of support for NATO, and I think it's a direct correlation to the fact that they watch Russian TV,” the American official said. Neighboring Armenia is also Russia’s most important ally in the Caucasus.

The hosts of the “Strength is in Europe” broadcast make regular visits to small towns around Georgia to meet with people outside the capital. Media and government officials outside Tbilisi also get special attention. Paata Gaprindashvili, the director of Georgia's Reform Associates, which runs factcheck.ge, notes that regional officials are much more sensitive to their statements being fact-checked – either positively or negatively – than are officials at the national level. “They watch quite closely, and they take it quite personally,” he said.

The early returns are mixed. While “Strength is in Europe” is well regarded, the fact that it is airs on Rustavi 2, a channel already known as heavily anti-Russia and pro-West, suggests it may be preaching to the choir.

The US-funded fact-checking, meanwhile, runs the gamut from debunking obvious misinformation – about EU regulations that don't exist, for example – to more contentious issues.

One recent mythdetector post identified as a “myth” the notion that “In 1801 Georgia Joined Russia of Its Own Free Will,” and instead argued that Russia simply “annexed” Georgia. Mainstream historians, however, have hewed closer to the former interpretation. Ronald Grigor Suny, in his The Making of the Georgian Nation, notes that the last eastern Georgian king, in the face of predations by Persia, “had no recourse but to attempt to renew the Russian protectorate... [and] made a desperate request that his country be incorporated into the Russian empire.”

The fact-checking enterprises also engage in revisionist history with respect to one of the most sensitive periods in Georgia-West relations: the inability of the US or Europe to protect Georgia militarily during the 2008 war with Russia. While Georgians complained bitterly at the time about that “betrayal,” a talking point has emerged more recently – and embraced by the fact-checking websites – that credits the arrival of an American humanitarian aid ship with stopping the Russian invasion.

“I don't believe in fighting propaganda with propaganda. You have to fight propaganda with truth,” Kakachia said. “The US involvement will not be so good here,” he said. “People say that Russia hasn't changed in 25 years [since the Cold War, but it's the same thing on the other side. People here know that the US also has a huge tradition of propaganda.”

Similarly, pro-Western information – even if it's not actually Western-funded – seems to many people to be propaganda, she said: “If something matches your belief, it's very easy to believe, and vice versa.” The narrative that the West is never going to be truly able to protect Georgia from Russian influence or aggression will be particularly hard to dislodge. “The problem is that it is true,” she said.

She also said that the US efforts have focused too much on liberal values, especially human rights, and not enough on the social and economic rights that animate many poorer, rural Georgians. “They say for example, 'Why do you talk about gay rights when children are hungry,'” she said. “We need to talk more about social rights. Until now, we've been more oriented toward liberal values, including human rights, but not strongly social rights. But this is now costing us.”

The implementers of the pro-Western campaign acknowledge that there is thus far no proof that Russia is to blame for anti-western discourse in Georgia, but that future efforts may focus on that. “I'm sure there's Russian money there, but I don't have any proof of it,” the American official said.

“All of this is a little bit of guesstimation, it's not hard evidence,” Tangiashvili, of the East-West Management Institute, added. Tangiashvili said that one of the future directions of anti-Russian messaging should include support for high-quality investigative journalism that might be able to uncover those links. “There should be more investigative journalism, more evidence connecting the dots,” he said.