Georgia: Village Celebrates Easter with Rugby-Style Struggle for a Ball 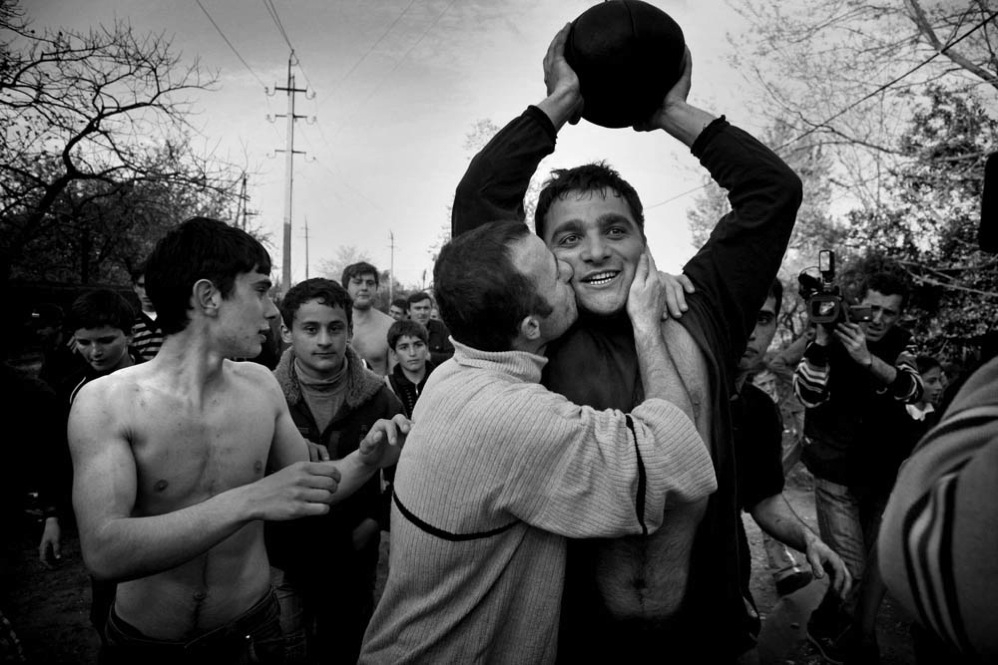 While the rest of Georgia celebrated Easter on April 4 at home around the dinner table, one village in western Georgia marked the day with a rugby-like scramble that effectively blocked traffic for hours on the country's East-West national highway.

The game, lelo ( "goal" or "try" or in Georgian), has no rules, no time-outs, and no limit to the number of people (men only) who may play. The "field" is the entire village of Shukhuti, a hamlet of about 2,000 in the western region of Guria, not far from the regional seat of Lanchkhuti. Two creeks, about 150 meters apart, mark the goal lines for two teams, made up of residents from the upper and lower halves of the village. The aim is simple: whichever side is the first to carry a 16-kilogram leather ball back to their creek wins the game.

Victory means dedicating the ball to a deceased villager and placing it on his grave after the match -- a reflection of Georgian Orthodox Church traditions of visiting cemeteries on Easter to commemorate loved ones. Lelo balls in various stages of decomposition can be seen on graves in both of Shukhuti's cemeteries.

Nobody knows exactly when or where lelo originated.

Local journalist and armchair historian Tamaz Imnaishvili believes the game commemorates an 1855 battle between the Ottoman and Russian Empires that occurred in Shukhuti.

Other villagers, like 47-year-old Robinzon Kobalava, reckon the game predates the battle; an ancient Georgian measurement equivalent to 16 kilograms - a puti -- is used to describe the ball's weight. It was once baptized in a mixture of red wine, honey, pomegranate and other ingredients known as aguna, a local concoction Kobalava claims dates to pagan times.

"Aguna was like the Red Bull of the past," Kobalava adds.

Cousins of the village's longtime family of shoemakers now have the honor of making the lelo ball from leather. The empty ball is then brought to the shoemaker family's house where neighbors fill it with a mixture of earth, sand, water and wine as the village priest, Father Saba, stands by.

Father Saba, a former Greco-Roman wrestler and lelo participant, links the game to the development of Georgia's Christian identity, which incorporated local pagan traditions. This would explain why lelo is played on Easter Sunday, he believes.

"Local traditions and Orthodox traditions met half way -- this is a good thing. It's good to remember that these traditions have made us who we are," Father Saba says.

In addition to being part of western Georgia's Easter traditions, lelo also provides respite from the difficulties of village life. Guria remains one of Georgia's poorest regions and is largely dependent on sustenance farming.

Minister of Environmental Protection and Natural Resources Goga Khachidze thinks the game has the potential to boost the local economy by attracting visitors -- much like the La Tomatina tomato fight in Buñol, Spain, where thousands of participants throw tomatoes at each other every August.

"This in itself wouldn't do more than provide a few jobs, but what is important is that people realize the potential they have to help develop their community through lelo," Khachidze declares. "In the future, they could turn lelo" into a weekend festival, with local music and crafts."

Journalist Imnaishvili has been lobbying a similar plan for four years; it includes developing local guesthouses and making lelo Shukhuti's official trademark, but he says he has not been able to attract much interest.

Shukhuti resident Kobalava says he would like to see more people come to i>lelo, like they did when the economy was better. He regrets that his family can no longer afford to host guests as in the past.

Meanwhile, he is infinitely proud of his village's game and no less proud that his side won this year.

"There is a saying that one time seen is better than 100 times heard. You can't understand what lelo" is until you see it with your own eyes," Kobalava says.