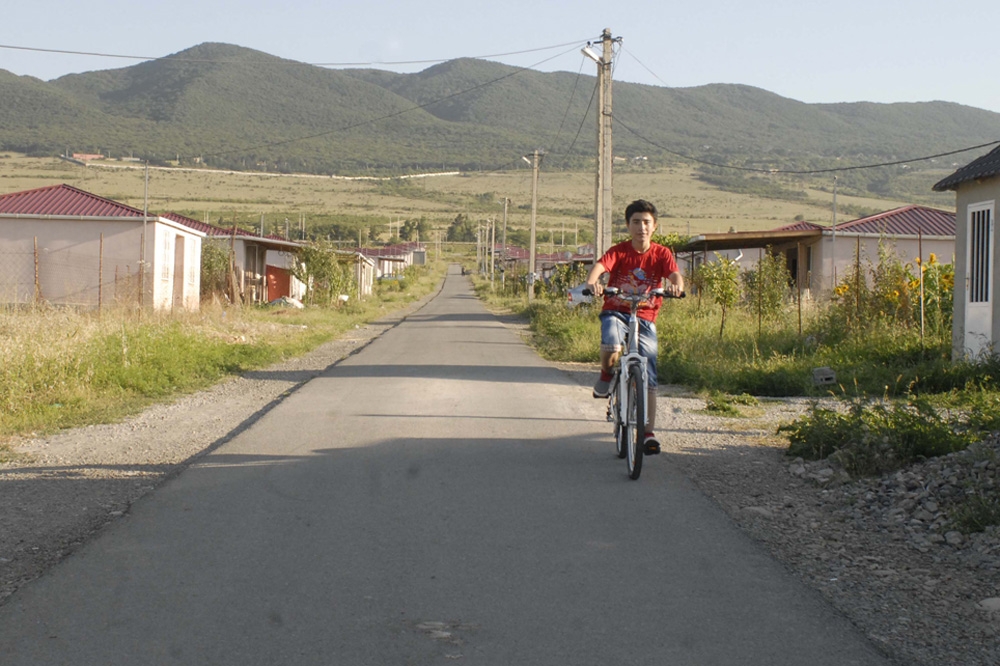 A boy rides his bike in Tserovani, an IDP settlement a 20-minute drive away from the South Ossetia border. (Photo: Molly Corso)

On the fourth anniversary of the 2008 war between Georgia and Russia over the breakaway region of South Ossetia, many of the tens of thousands of Georgians who were displaced by the conflict are still fighting – to find a job.

Those Georgians who fled South Ossetia (and the Upper Kodori Gorge in breakaway Abkhazia) in 2008 for Georgian-controlled territory received millions of dollars’ worth of emergency and humanitarian aid in the months following the war. But that assistance dried up in 2010.

The transition to self-reliance has not been easy, said Nana Chkareuli, an Internally Displaced Person (IDP) from the South Ossetian village of Akhalgori who runs an organization for youth on both sides of the conflict.

“When you go on the street, you can see that people have built things, and they are planting things in their yard. It shows that people are living here and they can fight [to survive],” said Chkareuli, referring to Tserovani, an IDP settlement of 22,000 people. It is located about a 20-minute drive from South Ossetia.

“But it is still very hard,” Chkareuli added. “Someone is doing something, but others don’t have any work or income.”

For 39-year-old Tserovani resident Ia Ikaladze, the daily scramble to restore a semblance of normalcy has eclipsed dreams of returning home to South Ossetia. Ikaladze, her husband and two children were forced to flee Tamarasheni, an ethnic Georgian village near Tskhinvali, South Ossetia’s main city, at the outbreak of the August 8-12, 2008 war. They arrived in Tbilisi with just the clothes on their back, and took refuge in a temporary shelter.

Today, Ikaladze earns 200 lari ($120.60) a month as a shop clerk. Together with her husband’s salary and a 112-lari ($67.64) monthly state allowance, the family is making ends meet, she said. “At least I work here. I have a little salary,” Ikaladze said. “There are other families that don’t even have that, and imagine [how difficult it is] during the winter.”

Finding a job is hard anywhere in Georgia; official unemployment stands at 15.1 percent, but unofficial estimates are much higher. Just over two-thirds of 6,299 respondents in a June survey for the Washington, DC-based National Democratic Institute identified themselves as unemployed.

State employment, however, has been helpful, with the government hiring IDPs to serve in a variety of capacities, including police officers, teachers, nurses, and soldiers. Data on the number of IDPs so employed is not available.

In the rural areas where the government built most of the 38 IDP settlements, agriculture offers the only real employment opportunities.

Although many IDPs are farmers by background, few have resumed working in the fields.
In Tsintskaro, an IDP settlement in rural southern Georgia, families have received a one-hectare land plot with each house. But many say they lack the money for seeds, fertilizer and other basic necessities for farming.

The $477 million in aid provided by foreign donors like the US Agency for International Development and the European Union addressed agricultural development, among other projects, but one American academic who has researched the 2008 war’s IDPs says the assistance didn’t foster what displaced families really needed – a steady, living wage.

While non-governmental organizations and the Georgian government have been “super helpful getting infrastructure in place” for the IDP settlements, it’s a salary that can “change the fortunes for a family,” Dunn said.

IDPs with easily transferable skills -- wedding singers or craftsmen, for instance -- have been better able to support their families, but farming, at best, only “supplements people’s diet,” she added.

IDP rights advocate Zurab Bendiashvili agreed, calling the NGO and government programs “a drop in the ocean” of need.

Over the next four years, the government has pledged to spend 4 billion laris ($2.4 million) on agriculture, an economic sector that employs the majority of Georgians, but accounts for less than 10 percent of Gross Domestic Product.

How those reforms will impact IDPs is not yet clear. Tamar Martiashvili, a deputy minister at the Ministry of Internally Displaced Persons, told EurasiaNet.org that the government is creating a “new assessment program” that will set up programs to help IDPs address the pressing issues, like employment. The government’s newly established State Employment Ministry also will include IDPs in its database of job hunters, she added. Representatives of the State Employment Ministry could not be reached to elaborate on its plans for IDPs.

The lack of job opportunities adds to IDPs’ general sense of insecurity, noted Chkareuli. “We don’t know if we will be here or there… We don’t see where our place will be in five years,” she said. “I think that everything starts from [stability] … and economic development.”

For IDP Ikaladze hope for a better future persists despite the economic difficulties. “I don’t know where the hope comes from, but I still hope,” she said. “If you just think nothing will happen, you could go crazy.”