Long out of office, in prison and in ill health, Georgia’s ex-president Mikheil Saakashvili is still dominating headlines and vexing the government. 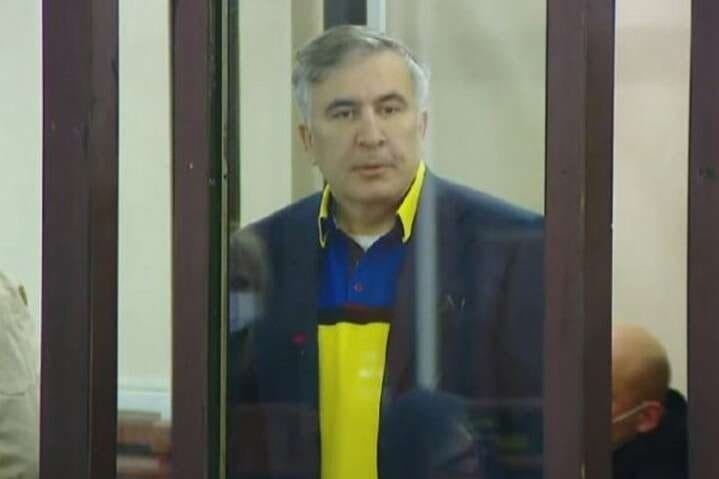 His health declining following months of battling the government from prison, Georgia’s ex-president Mikheil Saakashvili was admitted to a hospital on May 12.

But like everything surrounding the polarizing Saakashvili, there is a debate about the seriousness of his condition. Supporters of the former president insist that his life is in danger, while the authorities say that he is merely trying to malinger his way out of prison.

Saakashvili has been in jail since October, when he smuggled himself into Georgia in the back of a dairy truck. He had returned from a long exile in Ukraine for what he hoped would be a decisive battle with his nemesis, the Georgian Dream party of billionaire Bidzina Ivanishvili. Instead, he was quickly arrested, along with the unfortunate truck driver.

But even in prison, the hyperkinetic politician has managed to become a constant pain in the neck for the current regime.

For months, Saakashvili has been rallying supporters from his cell and turned his regular courtroom appearances into a running spectacle in which he airs his many grievances, weighing in on matters from Georgia’s domestic affairs, international politics, and the war in Ukraine. Ruling party officials find themselves forced to respond to his accusations nearly every day.

But life in prison, his frequent mistreatment there and his on-and-off hunger strike have taken a toll on the health of the man who continues to tower over Georgian politics a decade after leaving power.

During an April 20 court hearing on the case of illegal border-crossing, Saakashvili reported feeling weak and had to be helped out of the defendant’s box. A team of medics later diagnosed him with a raft of disorders, including anorexia. “His condition can be described as protein starvation. He is losing weight through losing muscle mass,” the doctors said in an April 27 evaluation.

Ruling party officials initially responded with ridicule. “He should eat eggs and cottage cheese and that will fix your [protein] problem,” deadpanned Irakli Kobakhidze, the chairman of the Georgian Dream. “I guess he had spent so much time traveling with dairy products that he has developed a revulsion toward them.”

But as the ex-president’s health continued to deteriorate, and supporters increasingly accused the government of simply waiting for him to die, the authorities offered to transfer him to a private clinic for examination and treatment. Saakashvili, however, countered with a list of conditions before he would agree to the transfer, including unrestricted access to family members, his lawyers, and preferred doctors.

“The guy is so smug that he is setting conditions before he lets us treat him,” said one Georgian Dream lawmaker, Irakli Zarkua.

Still, on May 12 Saakashvili was moved to the Vivamed clinic in Tbilisi amid tight security. His mother and his personal doctor showed up at the clinic but were not allowed to see him. “Hopefully someone, perhaps a lawyer, will come out to tell me what’s going on,” Saakashvili’s mother, Giuli Alasania, told reporters. Saakashvili’s doctor, Nikoloz Kipshidze, argued that the best the Tbilisi clinic can do is to stabilize the former president’s condition so that he can be moved to a specialized hospital in Europe for further treatment, which has been the main demand of Saakashvili’s family and friends.

“They are using his health condition as a pretext to move him abroad,” responded Georgian Dream’s parliamentary vice speaker, Gia Volski. He claimed that there are no medical reasons justifying treatment abroad nor legal mechanisms for arranging it.

Earlier on, Georgian Dream officials insisted that calls for transferring Saakashvili into an out-of-prison clinic were part of an elaborate plan by his United National Movement (UNM) party to free him and then attempt a coup to return him to power. Now, officials say that Saakashvili is deliberately harming his own heath to escape justice.

Saakashvili has dismissed the charges against him, including those of corruption and abuse of power during his rule, as a vendetta by Ivanishvili, whose Georgian Dream coalition knocked UNM out of power in 2012. After stepping down, Saakashvili then moved to Ukraine to reinvent himself, taking a series of high-ranking government positions. But he refused to disappear from Georgia’s political orbit.

Between his departure from Georgia in 2013 and return in 2021, Saakashvili took on the persona of a crusader against oligarchy, corruption, and Russian imperialism all across the post-Soviet space. He proved to be a veritable political roly-poly, staying afloat despite being kicked out and denaturalized by first Georgia and then Ukraine.

After falling out with then-president Petro Poroshenko – which resulted in its own farcical border-busting episode in 2017 – Saakashvili later returned to Ukraine in 2020 to work under current Ukrainian President Volodymyr Zelensky. It wasn’t long, though, before he was bumping back into Georgia stowed away between cans of yogurt and sour cream.

Saakashvili’s story has always bordered on the verge of absurdism and his tenure in prison has not been an exception. To a Georgian public already reeling from his shock reentry, he felt compelled to announce, immediately after being arrested, that he had a new Ukrainian girlfriend as well as a child with a Georgian pop singer. It appeared to come as much a surprise to his wife, the widely admired Sandra Roelofs, as it was to everyone else.

But the mercurial Saakashvili still maintains a strong core of supporters in Georgia, who argue that he brought Georgia out of its post-Soviet mire of corruption and lawlessness.

Opponents, meanwhile, see him as an autocratic villain who ran roughshod over political dissent. Throughout its time in power Georgian Dream has taken advantage of that image, dangling the threat of Saakashvili’s potentially ruinous return to power every time the party’s own democratic record is called into question.

Now, the health of the former president is shaping up as a test of the ruling party’s ability to be guided by human rights rather than politics, and rights groups and foreign diplomats have been calling on the government to treat him humanely.

"Fundamentally, we're talking about the health of a human being,” American Ambassador Kelly Degnan, said on May 11. “Making sure that Mr. Saakashvili or anyone in his situation receives the care that they need should be of paramount importance."