Georgia: Where Does the Church End and the State Begin? 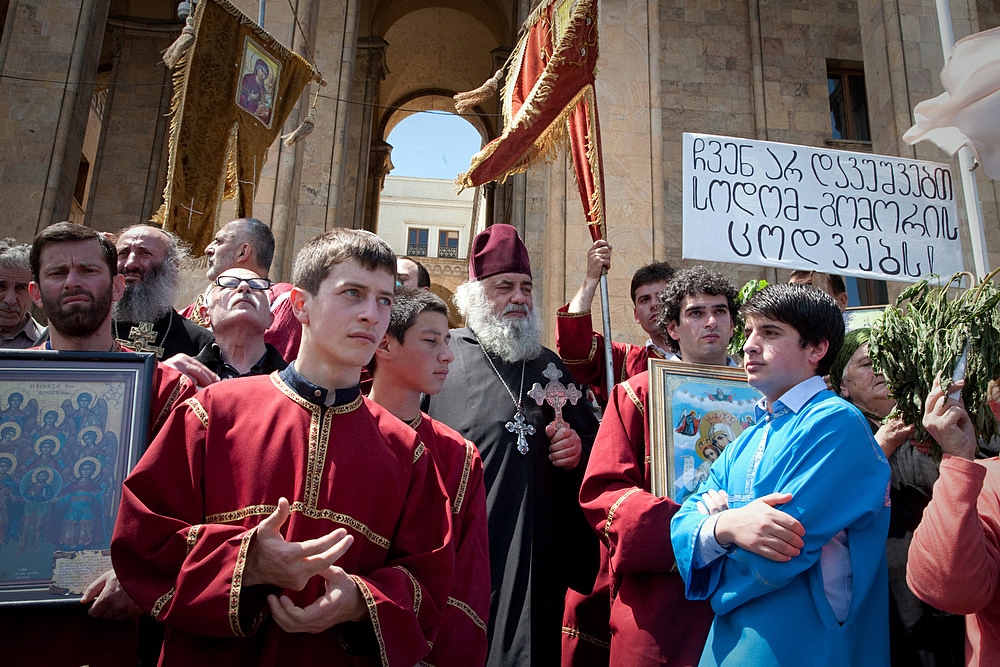 Priests and members of the Orthodox church gather on the steps of the former Georgian parliament in Tbilisi to stop a rally organized by LGBT activists. (Photo: Justyna Mielnikiewicz)

In the aftermath of the May 17 mob rampage against gay-rights activists in Tbilisi, public discussion in Tbilisi is focusing on church-state issues, especially the question of whether the Georgian Orthodox Church operates beyond the reach of civil law.

Priests played an instrumental role in mobilizing counter-demonstrators, and then pushing with them through police barricades to prevent a handful of LGBT activists and supporters from exercising their constitutional right to assembly. Dozens were injured in the chaos that ensued.

Several non-governmental organizations have lambasted law enforcement officers for failing to ensure security for the anti-homophobia rally, and have alleged instances of police prejudice in favor of the priests and other protesters – criticism not shared by the government.

Politicians of all stripes are now calling for the government to hold priests and secular protesters equally accountable for their actions. Yet, whether or not that will happen remains unclear. The Georgian Orthodox Church is arguably the country’s most popular and powerful institution. Technically, the state does not have an official church, but the government does provide money to the Church's Patriarchate. With hundreds of years of history behind it and the faith of the overwhelming majority of the country’s 4.4 million residents, the Church is a powerful symbol of Georgia’s sovereignty.  Public criticism of its actions remains relatively limited.

As part of its promised investigation into the violence, the government so far has arrested four men for hooliganism and defying police orders. They were released after paying a 100-lari ($61.15) fine. No priests have as yet been charged.

Prime Minister Bidzina Ivanishvili, whose Georgian Dream coalition enjoys broad support among parish priests, has condemned the May 17 violence as “shameful” and has promised that a cassock will not provide immunity from prosecution. At the same time, he has not directly addressed the Church’s role in the mêlée. In a May 21 statement to reporters, he appeared to duck the issue by touching on suspicions, shared by Interior Minister Irakli Gharibashvili, that the attack had been “directed” and financed “from the outside.” He did not elaborate.

Others have been more direct when speaking about the church’s role. On a recent talk show on the government-friendly TV9 station, Parliamentary Speaker Davit Usupashvili charged that Patriarch Ilia II’s call for the government to ban the anti-homophobia rally effectively had “reinforced [the protesters’] position, that if the state does not prevent [the rally], then we ourselves will prevent it.”

Debating the patriarch’s words and actions is a “constitutional right” and “[E]veryone should get used to it, including representatives of the Church,” he underlined.

Despite official pronouncements, few expect any priests to be arrested for the May 17 violence. After decades of political and economic instability, the Church, for many Georgians, is the one constant, noted Tbilisi State University sociologist Giga Zedania. It has provided “a sense of stability [and] spiritual refuge” and is seen as “above partisan battles.”

That image most likely caused police to think about not employing the usual crowd-control tools, including water cannon and riot gear, to stop priests and others from giving chase to LGBT activists, he added.

The diplomatic skills of 80-year-old Patriarch Ilia II, who has led the Church since the Soviet era, have contributed to the Church’s special status. But a new generation of priests is more willing to confront the state, opined Zedania.

One influential senior cleric who was among the anti-rally protesters is 51-year-old Bishop Iakob of Bodbe and Tsurtaveli. He struck an aggressive note in a sermon in Tbilisi’s main cathedral, Holy Trinity, immediately following the May 17 clashes. “You saw how many people showed up today [May 17] and we can bring millions out,” the bishop stated.

That confrontational tone, though, changed after the patriarch distanced himself from the violence, and called for both sides to pray for each other. In a subsequent statement, the bishop claimed that the Church will discipline those priests guilty of “misconduct” and that it “won’t be difficult for them to face secular justice, either.”

Church representatives could not be reached for comment to elaborate on potential disciplinary procedures. A spokesperson for the Ministry of Internal Affairs did not respond to requests from EurasiaNet.org for information about the status of the government’s investigation.

LGBT activists and members of Georgia’s LGBT community assert that their safety could depend on the government’s willingness to proceed with prosecutions.

“We face an ongoing threat. Members of the LGBT community are being repeatedly harassed because the authorities’ failure to stop the violence has created a sense of impunity for the radicals,” said Irakli Vacharadze, the executive director of Identoba, a non-governmental LGBT group that was one of the rally’s main organizers.

On May 20, Identoba released a list of eight reported attacks against LGBT individuals following the May 17 rioting. One Identoba staff member, who requested anonymity, alleged to EurasiaNet.org that two young men had attacked him in a city park, setting his hair on fire.

Faced with such reports, many concerned Orthodox faithful point to the Church’s doctrinal rejection of violence. “I believe that the Church’s only weapon is preaching,” commented Deacon Giorgi of St. Panteleimon Cathedral on TV9.

But prayer won’t be enough to prevent future trouble, some experts contend. “What the Church really needs to do is to adapt to the changing reality, to draw red lines for itself,” said theologian Levan Abashidze. “It has to take the role that churches have in modern societies, when the church has a moral, not a legal authority.”---------This story was amended on May 22, 2013 to clarify the financial ties between the state and the Georgian Orthodox Church.

Giorgi Lomsadze is a freelance journalist based in Tbilisi. He is a frequent contributor to Eurasianet'sTamada Tales blog.