Georgia: Where Feasting Traditions Are Movable 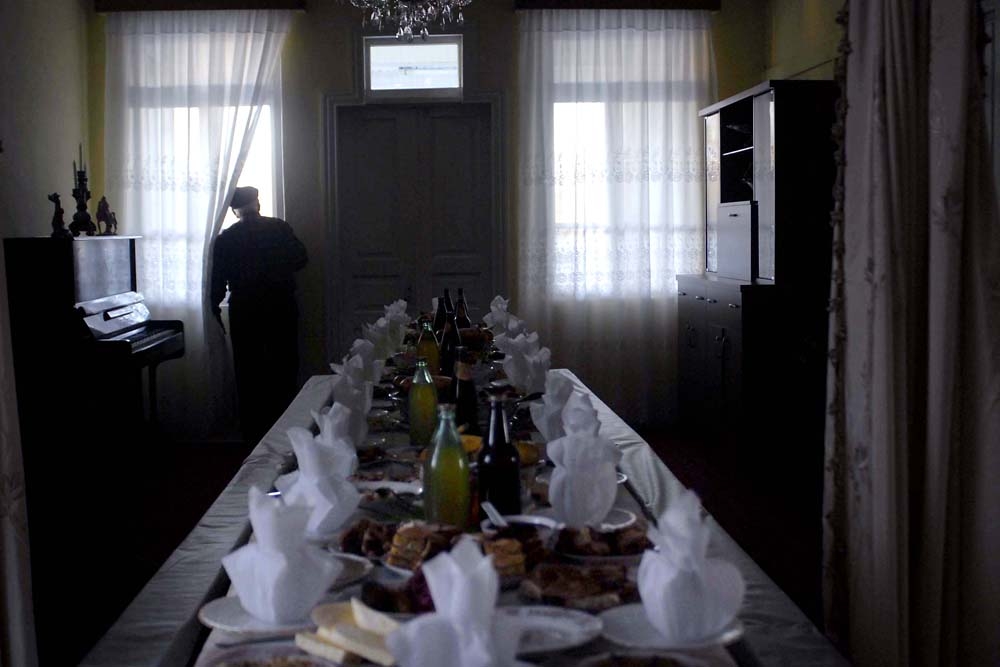 A Georgian supra is a traditional dinner party that requires days of preparation, depending on the number of guests expected. 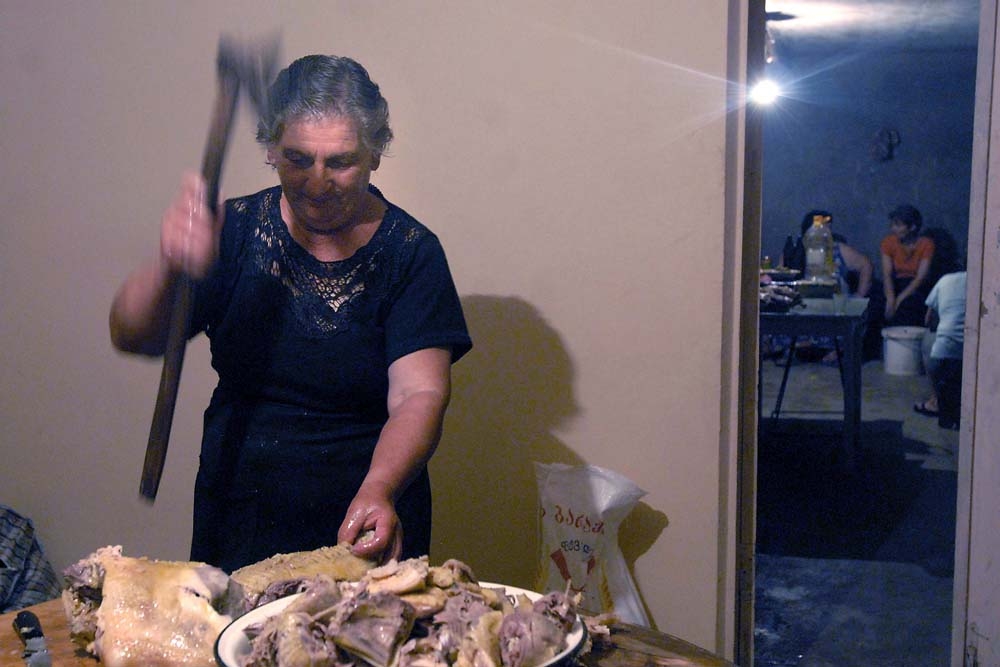 A woman cuts chicken with an axe as she prepares traditional dishes for a wedding supra in Supsa. 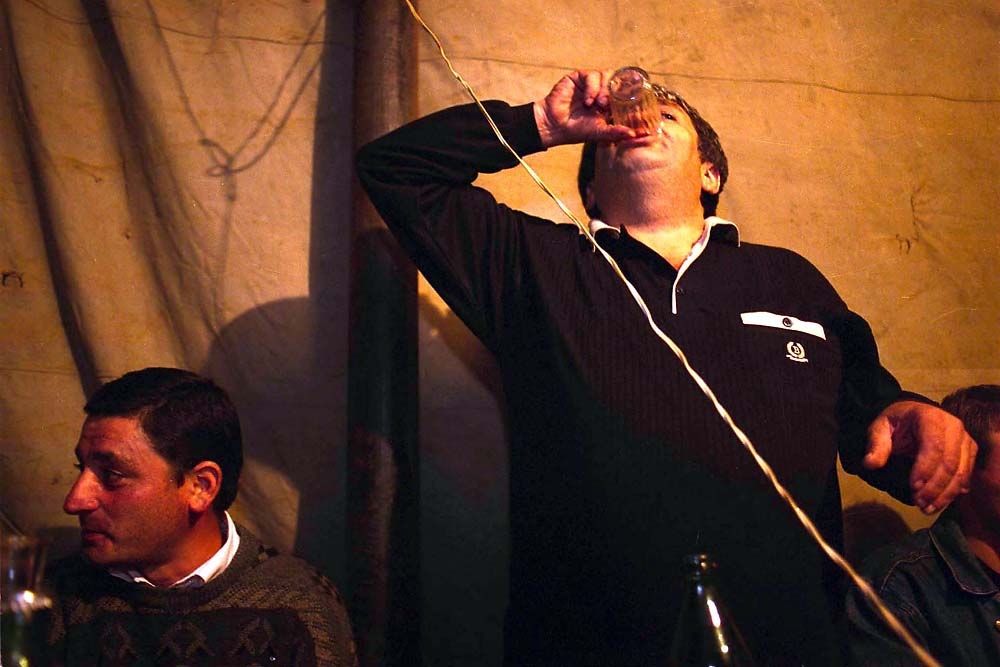 Drinking is a crucial part of the supra, but it takes place under the strict control of the head of the table, the tamada. 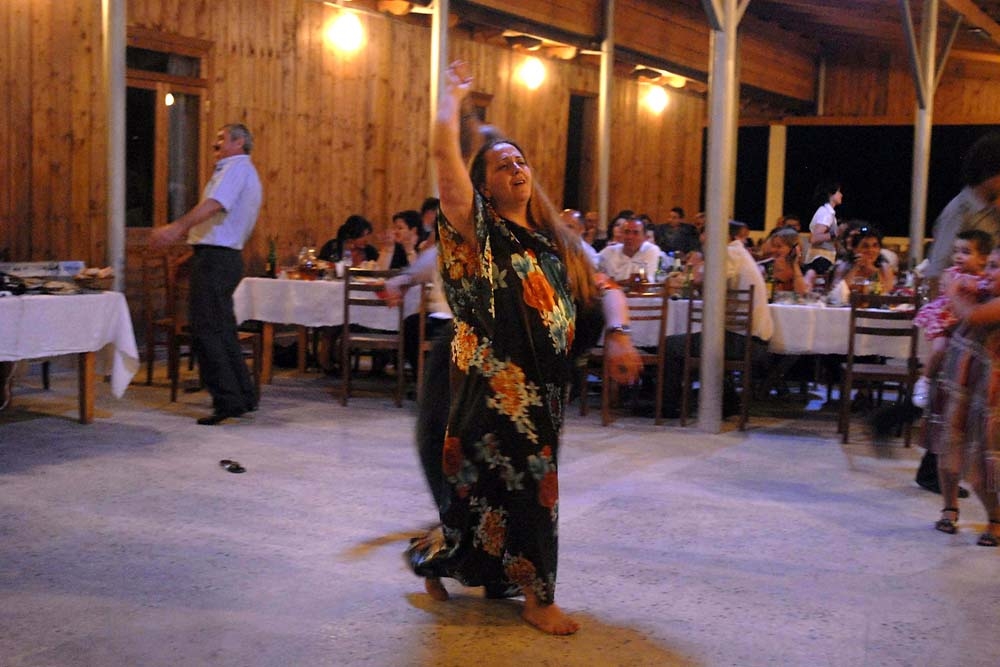 A couple dances during a priest's birthday supra near Tbilisi. 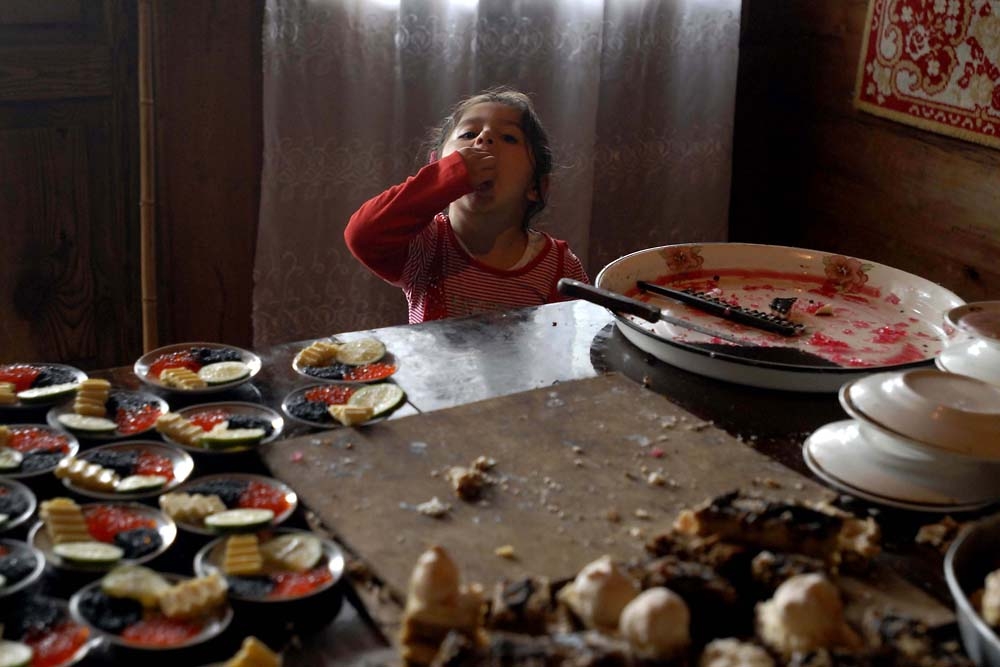 Children are not encouraged to sit at the table during a supra, where the priority is placed on adult guests. 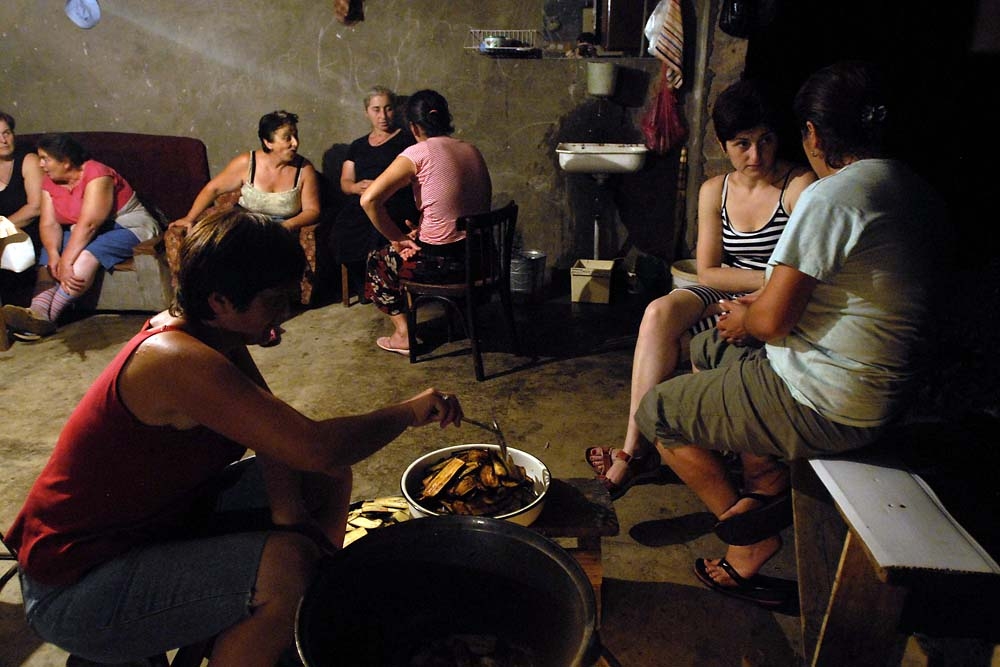 Supras for weddings and funerals are huge affairs, especially in the villages, where traditions dictate a large feast. 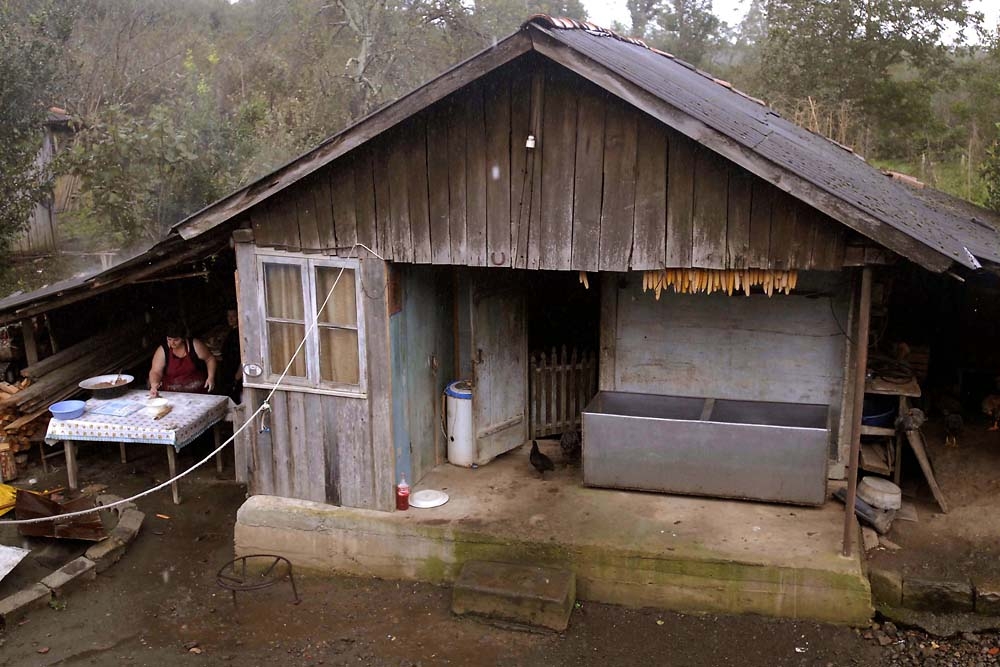 Supras can take days of cooking. The banquet consists of dozens of dishes and courses, including salads, fish, meat, and sweets. 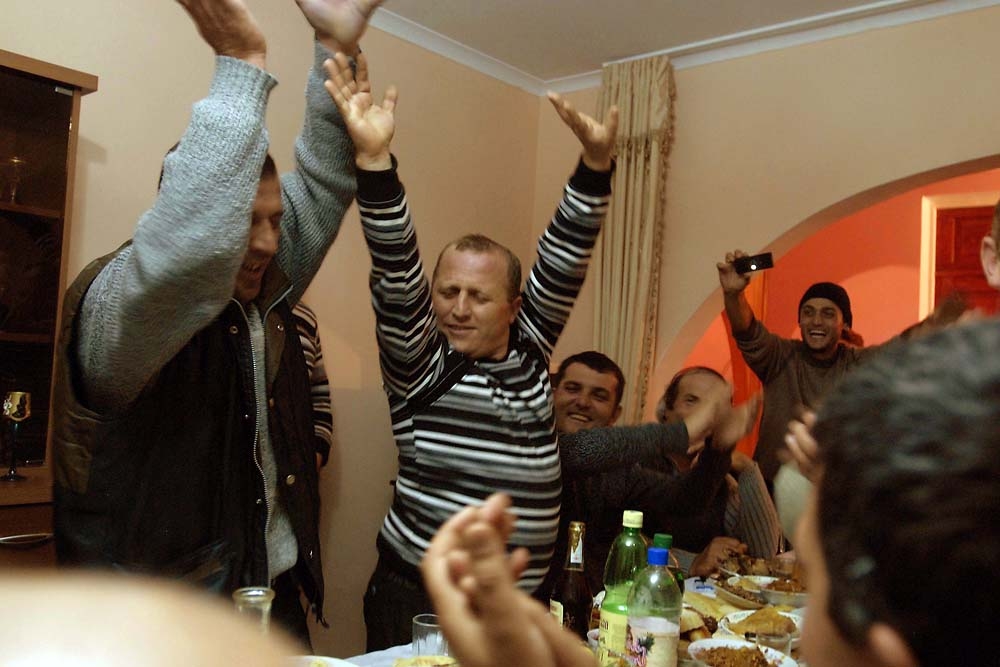 Men dance at a supra, where every toast links back to a pillar of Georgian culture: family, honor, religion, motherland. 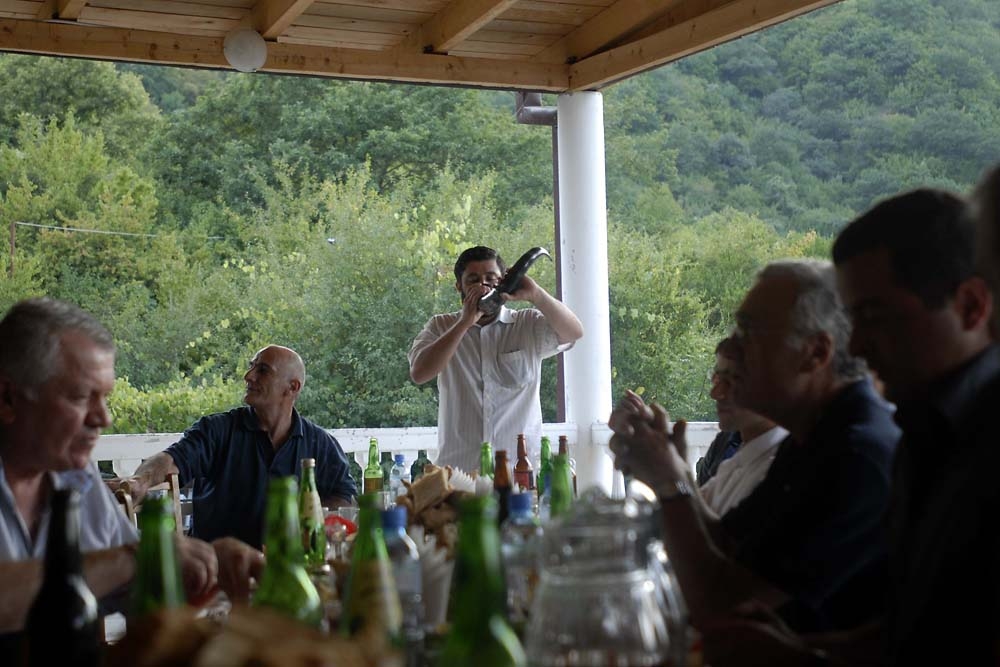 While the tradition of the feast has been a long-standing part of Georgian life, it is slowly changing. 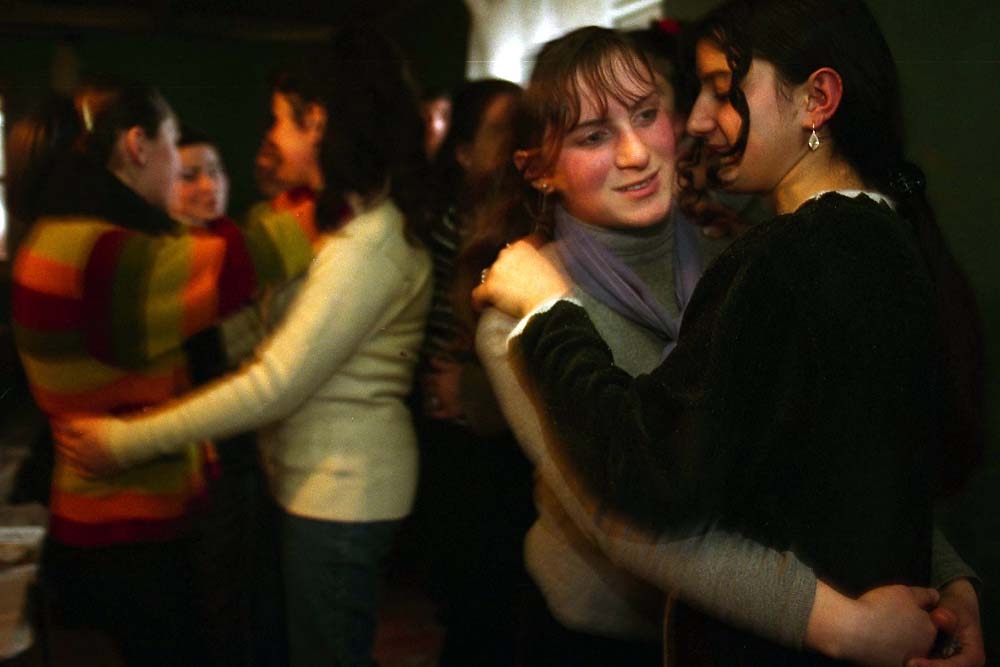 Girls dance at a neighbor's 16th birthday supra in a village in western Georgia. 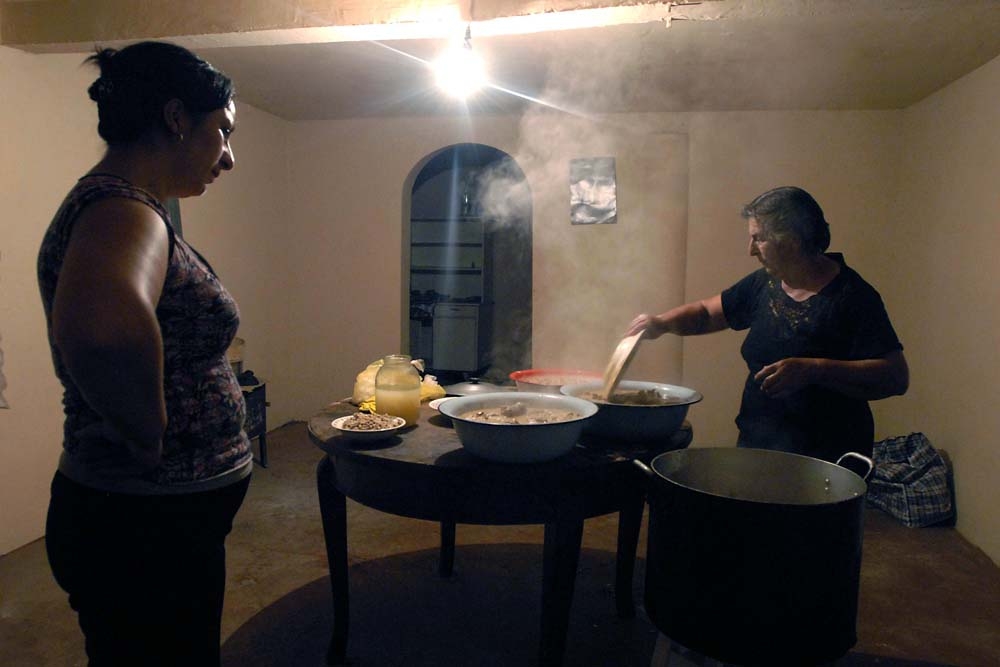 All food, with the exception of the salad dishes, must be hot. Women constantly heat up and bring around new plates of food. 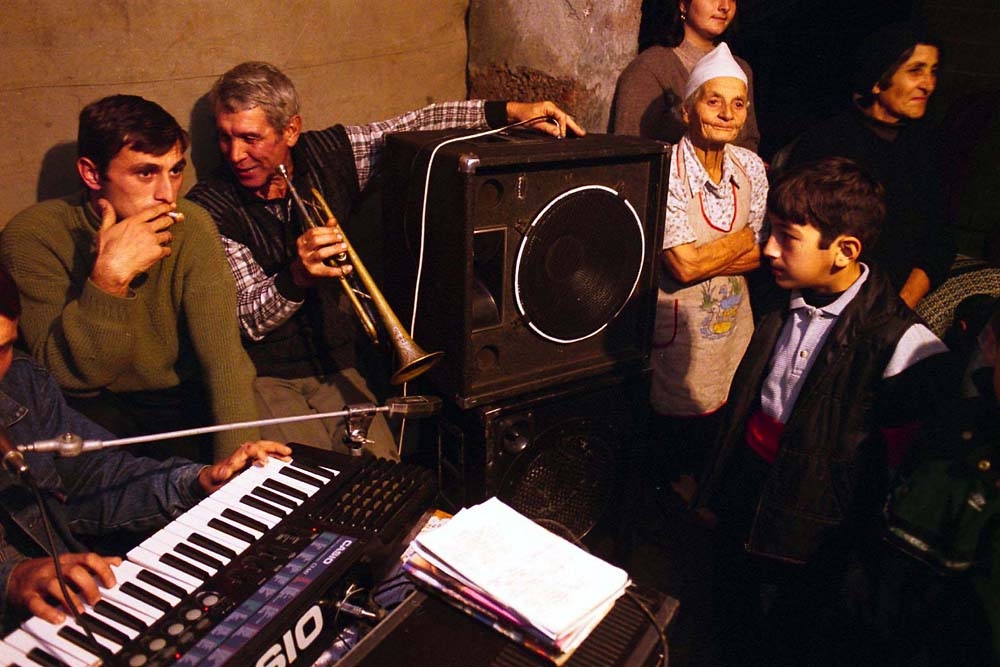 Musicians and guests mingle at a village wedding. 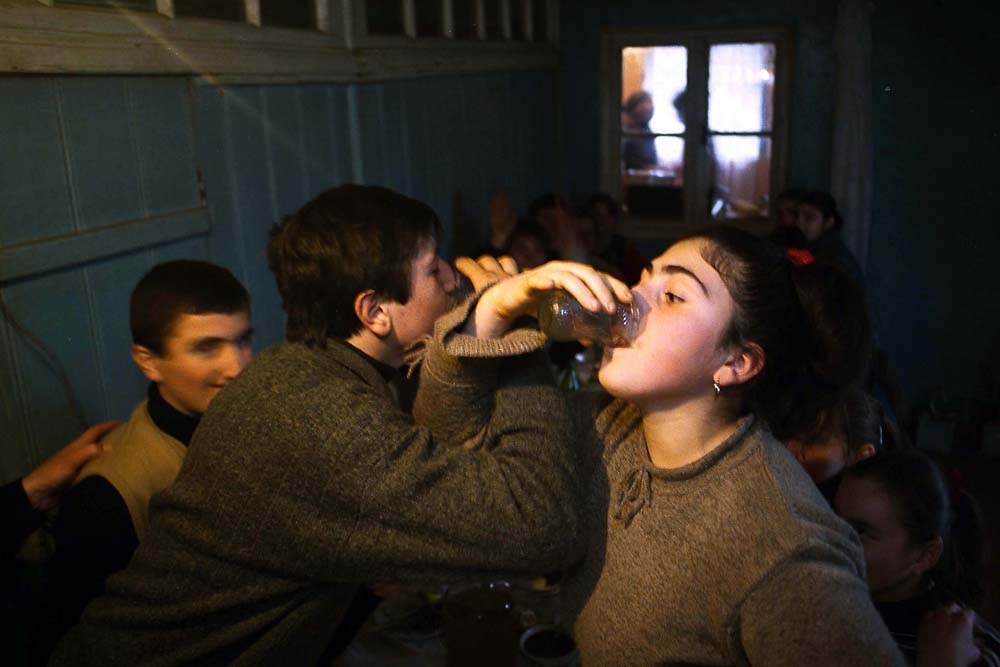 Girls are taking a bigger part in the supra celebrations as traditions concerning women's roles around the table are changing.
prev
next

Feasting and toasting have long been an integral part of Georgia’s cultural identity. But shifting priorities mean that Georgians are redefining the custom of banquets, known as supras.

“The à la fourchette (a quickie meal featuring cold cuts) is fighting against the supra … and I don’t know which one will win,” said sociologist Emzar Jgerenaia, director of the National Library’s Department of Science, Culture and Civil Education.

The faceoff is not about food alone. In a region awash with foreign influences, the supra (derived from the Georgian word for tablecloth) used to serve for many as a line of defense for Georgian identity.

The feast’s liturgy of dozens of toasts -- presided over by a tamada, or toastmaster, and delivered in stylized Georgian -- “represent strong oral traditions, histories,” which “saved” Georgian culture from centuries of invaders, commented 59-year-old geologist Vasili Tabagari, a tamada with 42 years of toasting experience.

“Willingly or not, you learn something,” he said wryly.

But over the past 21 years, since the Soviet Union’s collapse and Georgia’s reemergence as an independent country, the supra’s importance has been diminishing, according to sociologist Giorgi Nizharadze, a professor at Tbilisi’s Free University who has written about the practice.

“[I]t has slowly lost its function because ... the threat toward the national identity has decreased,” Nizharadze continued. As a result, the tradition, he said, is “quite naturally changing.”

Georgian supras today are often “much more informal, and less structured,” with strict obedience to the tamada and the order of toasts (obligatory toasts include to the event itself, Georgia, peace, women, the dead and children) no longer expected.

In many urban centers, including Tbilisi, the Black Sea port city of Batumi and the parliamentary seat of Kutaisi, women may go to restaurants on their own for a supra without a male tamada, and toasts are sometimes made with beer -- something that would have been considered sacrilegious a generation ago, Nizharadze elaborated.

But political and societal transformations are not the only influences that are producing changes in supra protocol; economic pressure, specifically the need to earn money amid the country’s ongoing financial doldrums, is also playing a role.

“I think that people can no longer sit for a long time at the table, and they don’t have time to lead a traditional life,” said Jgerenaia, the sociologist.

During the Soviet era, no one thought twice about taking time off work to attend a supra. These days, time is money, agreed Nizharadze.

Another factor is the cost: people are not necessarily able or eager to drop the cash needed to hold epic, hours-long feasts.

Before independence in 1991, wedding supras with 1,000 guests and funeral feasts so large that some participants didn’t know the deceased were not unknown. Many Georgians back then were able to afford such mega-bashes, and they offered a means to keep up with the neighbors, said tamada Tabagari.

Twenty-three-year-old economist Alexander Bluashvili agrees that young Georgians today view supras quite differently from their parents and grandparents. “The point is not to get drunk, or to sleep on the table,” Bluashvili said. “It is to talk, to have fun, to tell jokes and to encourage others to express their opinion.”

Rather than a tamada acting as “a dictator,” he said, the goal is to find a compromise between saying set toasts “every five minutes” and respecting the Georgian tradition of heartfelt expressions of feeling at gatherings of friends and family.

“We do not have to prove our identity anymore. We can create something new and we can innovate,” explained Bluashvili. “Tradition is not something that is static; it can be changed.”

Only in Georgia’s villages and regional towns has the more orthodox form of the supra (including the role of women as cooks and clean-up crew) remained largely unchanged, sociologists say; perhaps a reflection of residents’ need to assert their own “provincial identity,” reasoned Nizharadze.

For tamada Tabagari, though, the changes, whether in supra size or structure, present no threat to the Georgian supra itself. “It is evolving, but the traditions are not forgotten,” he asserted. “The core is still there.”