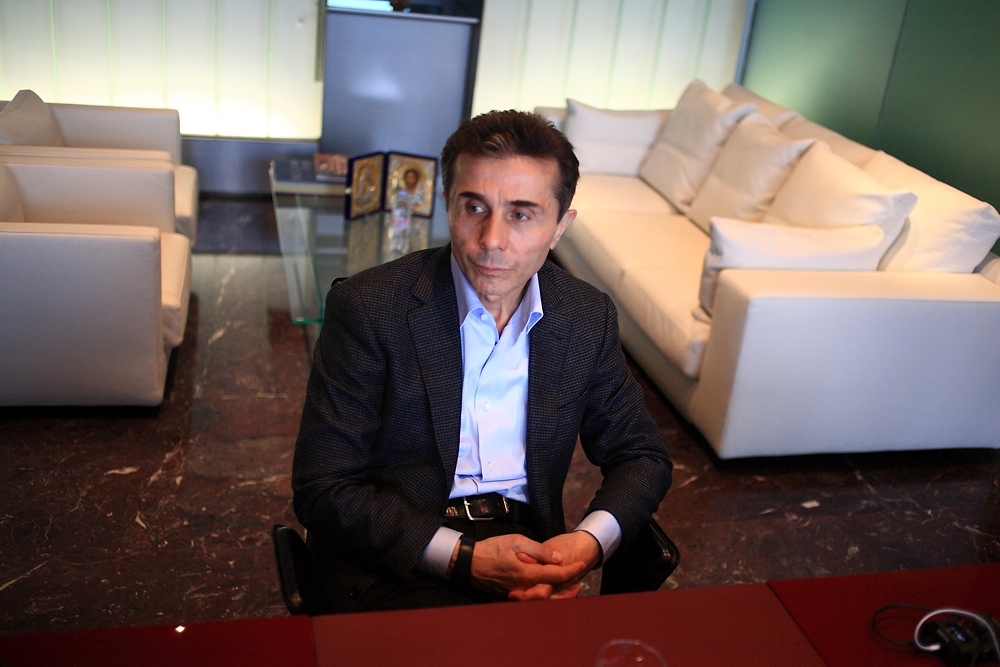 Looking ahead to his future? (Photo: Temo Bardzimashvili)

Georgia’s Prime Minister Bidzina Ivanishvili claims his intended resignation later this month will help break the South Caucasus country’s dependence on strong political personalities. Yet, even if he gives up his formal title, political analysts in Tbilisi expect Ivanishvili to remain the power behind the Georgian government.

If all goes as it now seems, Georgia will enter uncharted political territory by the end of this month with a new prime minister whose powers exceed those of the president. The prime-minister-in-waiting is expected to be 31-year-old Interior Minister Irakli Gharibashvili, whose nomination requires parliamentary confirmation no later than a week after the November 17 inauguration of President-Elect Giorgi Margvelashvili.  That shouldn’t be a problem, given that the legislature is controlled by Ivanishvili’s Georgian Dream coalition.

Ivanishvili, who claims he will “leave” Georgia “a European-style government,” has announced plans to resign on November 24.

To date, however, there have been few signs that the government has a strategy outside of Ivanishvili’s own plans, and little effort to challenge the perception that the billionaire is the only one in control.

Two factors are helping to fuel the impression that Ivanishvili will remain the true center of power for the foreseeable future: for one, there’s no governmental institution that has the kind of heft that could fill the vacuum created by Ivanishvili’s departure. And, two, the prime minister’s enormous personal wealth, estimated by Forbes at $5.3 billion, ensures that he will continue to wield big influence over the political process.

Both Gharibashvili and Margvelashvili have no established political pedigree apart from Ivanishvili’s Georgian-Dream coalition. Their combined experience in government totals just under one year and nine months.

According to his official biography, Gharibashvili’s entire professional career has occurred at organizations owned or financed by Ivanishvili.

In a short acceptance speech after Ivanishvili on November 2 named him as the Georgian Dream’s nominee for prime minister, Gharibashvili vowed to “spare no efforts to successfully continue” Ivanishvili’s policies.

The cover for the November 4 edition of the popular weekly tabloid Asaval Dasavali spelled the situation out in no uncertain terms: “Gharibashvili’s arrival means that Ivanishvili is not going anywhere!”

Similarly, Margvelashvili, 44, is better known as Ivanishvili’s “good friend” than for his less than nine-month tenure as education minister. The prime minister was a major presence at most, if not all, of Margvelashvili’s campaign events, even going so far as to hold a double press conference with him after his October 28 election.

Margvelashvili also has stated repeatedly that Ivanishvili will influence his decisions once in office.

Political analyst Marina Muskhelishvili, director of the Center for Social Studies in Tbilisi, believes that this lack of any clear government strategy apart from that of the outgoing prime minister will make Ivanishvili a “very influential, shadow person” by default.

“[It is] not because Ivanishvili’s own intentions are wrong, but because the whole mentality is not enough developed to create this policy base without a strong leader,” she said.
A strong leader “does not necessarily mean an authoritarian leader,” she continued, but one “with determination to do something for the country.”

Few doubt the prime minister’s determination in that regard. He has not, however, spelled out his post-resignation plans. He has expressed both a broad desire to become an active member of “civil society,” and referred to “a 20-year period after which we will achieve final victory.”

Aside from political influence, though, money may be the most tangible way that Ivanishvili makes his presence felt. In September, he announced plans to invest $1 billion in a $6-billion investment fund intended to energize Georgia’s sluggish economy.

Tamar Gurchiani, a lawyer active in civil society, argues that Ivanishvili’s decision to put so much of his own money into the fund, while, at the same time, enabling “his own choices” to hold the presidency and office of prime minister, signal clearly that he intends to maintain some control over the government.

“He is definitely going to work behind the scenes,” she predicted.

That could result in a strong leader without public accountability, cautioned Sergi Kapanadze, a former deputy foreign minister under outgoing President Mikheil Saakashvili and the director of Georgia’s Reforms Associates, a Tbilisi think-tank generally critical of the government.

“If we get a scenario [where] there is a continuous involvement of the former prime minister in politics, I have to say that I don’t believe this will be good for our country for many reasons…first of all, because what get[s] lost is accountability,” Kapanadze said.

At the same time, Georgians have been clear that they do not want Ivanishvili to leave office. In a September survey for the National Democratic Institute, 71 percent of 3,838 respondents nationwide disagreed with the prime minister’s decision to leave office one year into the job.

After two decades of presidents with dominating political personalities, and the legacy of top-down control under Soviet rule, Georgians have grown accustomed to “one leader,” noted Muskhelishvili, and living for “one great goal,” be it “building communism” or “building democracy and entering NATO.”

But, as yet, no “properly working institutional system” of government apart from that one-leader-one-goal concept yet exists in Georgia, she added.

Frequently, on the strength of Ivanishvili’s announcement, politicians and journalists already refer to Gharibashvili as “the prime minister,” seemingly taking the parliamentary approval requirement for granted.

That focus on personalities means that if the new prime minister is seen as weak, attention will turn, instead, to the perceived source of his power -- in this case, Ivanishvili.

Against that backdrop, demonstrating his own legitimacy could prove the new prime minister’s biggest challenge, commented Paata Gaprindashvili, deputy director of Georgia’s Reform Associates and a former ambassador under President Saakashvili.