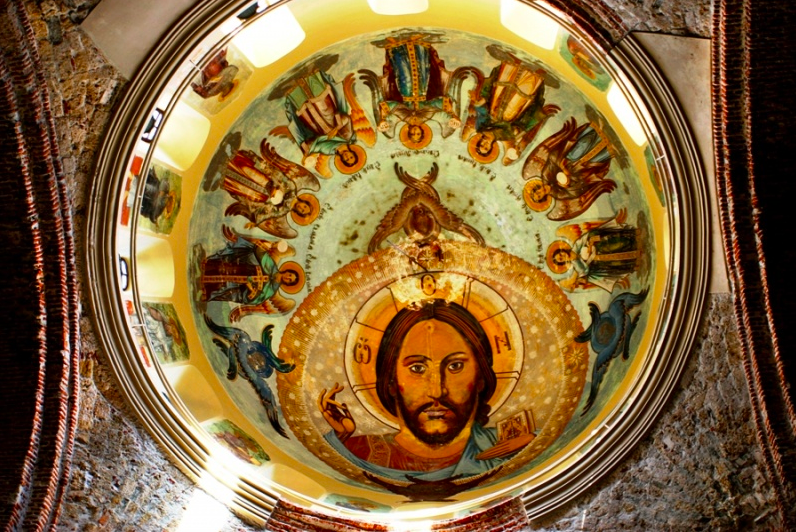 New Athos Monastery in Abkhazia, the site of a schism that Georgian and Russian church leaders have agreed to try to jointly resolve. (photo: Abkhazian Orthodox Church)

The governments of Georgia and Russia have no formal relations and remained locked in conflict over the breakaway territory of Abkhazia. The two countries' churches, however, have announced a surprising joint diplomatic effort to repair a schism in the Abkhazian church.

On November 1 Metropolitan Ilarion, chairman of the Department for External Church Relations of the Russian Orthodox Church (ROC), met with the head of the Georgian Orthodox Church (GOC) Patriarch Ilia II. Formally, the visit was organized so Ilarion could invite Ilia to the upcoming December 4 centenary celebration of the restoration of the patriarchate in Russia.

However, the unusual visit by a high-ranking Russian clergyman soon turned to the sensitive issue of Abkhazia, the territory that broke away from Georgia in the 1990s and whose de facto government is now heavily backed by Russia.

“We are ready to start work, because there are so many problems that need to be solved,” Ilarion said. “How many people do you think should be included in this group? Two or three will probably be enough.”

Ilia II responded by announcing the creation of a new effort to speed up the resolution.

“I was told that there was a split between this group – Vissarion Aplia and others” he said. “The representative of Abkhazia came here and told me about this split.”

The “representative of Abkhazia” was left unspecified.

The split dates from 2011, after Abkhazia’s New Athos monastery was seized by representatives of the Holy Metropolitanate headed by Dorofei Dbar. The other party in the conflict, which calls itself the Abkhazian Orthodox Church, is under the leadership of priest Vissarion Aplia.

Under Vissarion, the Abkhazian Orthodox Church appealed to the Moscow Patriarch for religious decisions, rather than the Georgian Orthodox Church. Under Archimandrite Dbar, the church would be autonomous from both Moscow and Tbilisi.

Archimandrite Dbar argues that the ROC's position in the matter is biased.

“The Russian Orthodox Church can hardly pretend to be objective and ‘equidistant’ from the conflicting parties,” he said. “It has long declared the Holy Metropolitanate of Abkhazia to be in schism.”

The ROC, in turn, recognizes the jurisdiction of the Georgian Orthodox Church throughout the country, including Abkhazia and South Ossetia.

Speaking with the television network Rustavi 2, Grigor described his role in colorful terms: “Abkhazia is an open wound. Everyone’s heart hurts – physical and spiritual. The situation requires a doctor, and I’m a cardiologist.”

“The Russian Orthodox Church recognizes the jurisdiction of the Georgian Orthodox Church [in Abkhazia],” theologian Levan Abashidze told RFE/RL. “There must be dialogue, even if this doesn’t mean there will be a solution acceptable to both sides.”

Others are more skeptical of the ROC’s intentions. “Russia only plays by its own rules and only purses its own interests, no matter in what sphere – political or church,” Lado Narcia, a colleague of Abashidze’s, told RFE/RL. “You cannot communicate with them on these issues on a bilateral basis. In this case, other churches must be connected.”

Paata Zakareishvili, the former head of Georgia's State Ministry for Reconciliation and Civic Equality, agreed that the discussion is designed to strengthen Russia’s position in Abkhazia.

“The neutrality that the Georgian Church adhered to was better than this kind of involvement in Russia’s favor” he said. “This at best will lead to nothing, and at worst – further alienate Georgia from Abkhazians.”

Some argue the position of the GOC will enhance Russification.

“Russia needs the GOC to legitimize further violence in Abkhazia against forces opposed to Russification,” said theologian Bek Mindiashvilli. “The ROC has been carrying out this policy there for many years.”

Online commentators have pointed to geopolitics, and the ROC’s position in the orthodox world.

“Today the ROC needs the support of the GOC more than ever in the matter of Ukraine, and this is more important for it than little Abkhazia,” one online forum concluded.