The arrest was the latest in the crisis that has beset Georgian politics as the opposition has refused to accept the results of elections last year. 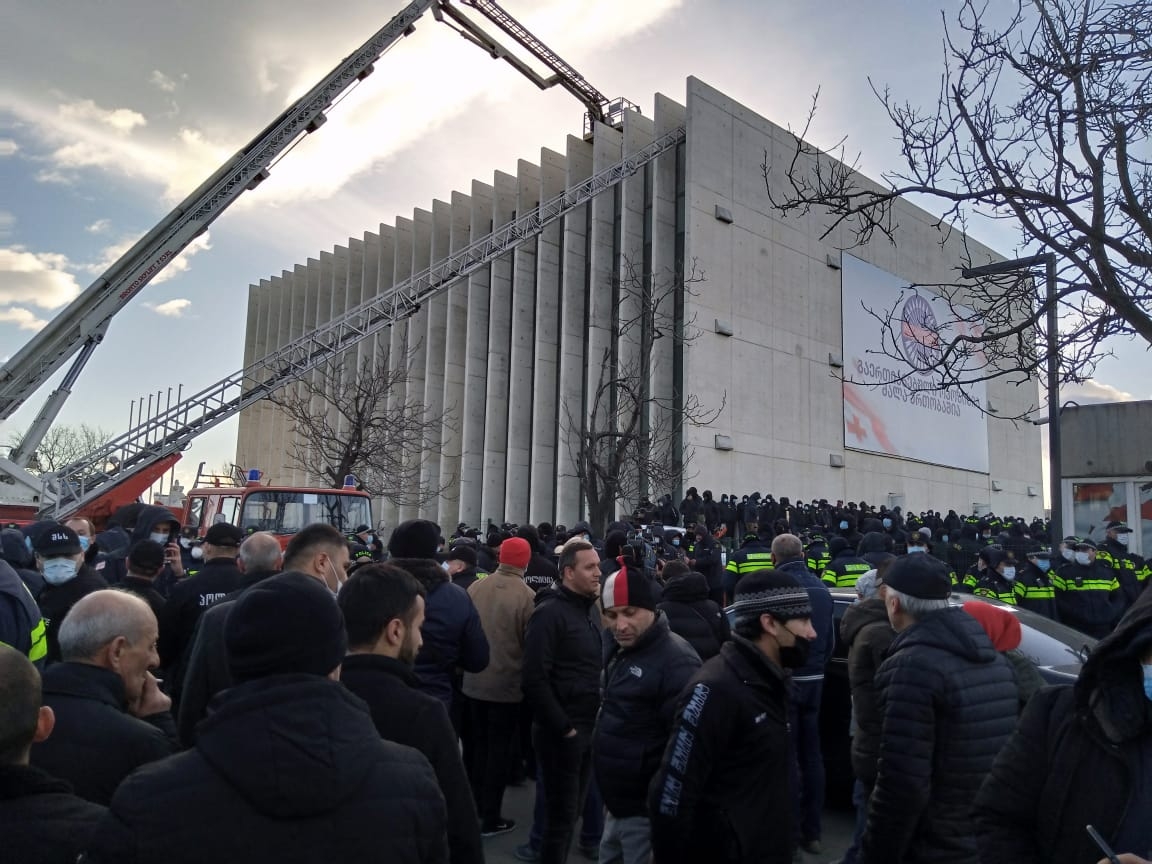 Georgian police used a fire engine ladder to enter an upper floor of the headquarters of the United National Movement in an operation to arrest its leader. (Photo: UNM)

The Georgian authorities arrested an opposition party leader the day after electing a new prime minister known for his uncompromising stance toward the opposition, signaling that the ruling party does not intend to give into persistent challenges to its rule following elections last year.

Early in the morning on February 23, police entered the headquarters of the largest opposition party, United National Movement (UNM), and arrested its leader, Nika Melia. Melia had been charged with inciting violence at an anti-government protest in 2019 but considered the accusations politically motivated, refused to post bail and threw away an electronic monitoring bracelet that a court had ordered him to wear until trial.

Along with Melia, opposition activists reported that “dozens” of supporters were detained as they tried to block the arrest. The authorities reported that they had detained 21 people during the raid on the UNM office. Seventeen people were injured, two of them seriously, the Ministry of Health reported.

“Despite numerous warnings from the side of the Ministry … the gathered demonstrators at the party office did not obey the lawful request of the police and offered resistance to the law enforcement officers,” the interior ministry said in a statement. Opposition activists called for protests later in the day.

The day before, Georgia’s parliament had approved a new government led by Prime Minister Irakli Gharibashvili, who took over following the surprise resignation of his predecessor, Giorgi Gakharia. Gakharia cited the plans to arrest Melia as his reason for stepping down, but Gharibashvili, in his pre-confirmation address to parliament, suggested that he would not take such a compromising line. He called Melia a “criminal” and warned that there would be “no indulgence for being chairman of some political party” and that he “would not escape justice,” according to an account of the speech in the local news website Civil.ge.

The arrest marked the peak (thus far) of the crisis that has crippled Georgian politics since parliamentary elections last fall. The ruling Georgian Dream party decisively won those elections, but UNM and its opposition allies claimed – contrary to the assessment of international observers – that the vote was falsified. Their claim relied heavily on an election-monitoring NGO’s calculations of the vote which turned out to later have been the result of a counting error.

Undaunted, the opposition has been demanding new elections, refused (with a handful of exceptions) to take the seats in parliament that it won, and has been vigorously lobbying its Western allies for support. The United States embassy and European Union delegation have instead been calling equally on both the authorities and the opposition to exercise restraint.

“Shocked by the scenes at UNM headquarters this morning,” wrote UK ambassador to Tbilisi, Mark Clayton, on Twitter. “Violence and chaos in Tbilisi are the last thing Georgia needs right now. I urge all sides to act with restraint, now and in the coming days.”

Neither side has paid much heed to those appeals, and with its nomination of Gharibashvili, Georgian Dream indicated that it does not intend to meet the opposition halfway. In his aggressive address, the new prime minister referred to UNM as “a refuge of criminals and terrorists” and that he would “restore order.”

He unloaded a lengthy broadside on the UNM, which ruled Georgia for a decade before Georgian Dream took over in 2012. He accused them of “ruining” the country’s economy and of “treason” in a murky case of cartographers accused of giving up land to Azerbaijan. Ahead of last fall’s elections he had said that UNM “deserved to be banned” because of the case; in his speech before parliament he said one of his first visits abroad would be to Azerbaijan to work out the issue with President Ilham Aliyev, whom he called a “wise leader.”

Intriguingly, Gharibashvili called for greater state involvement in the economy, saying that the “small government idea is a myth impeding the country’s development” and that Georgia should do more to be economically self-sufficient. This was a remarkable rhetorical break from Georgian political orthodoxy, introduced by UNM and continued by Georgian Dream, of an extreme free-market approach to economics. Two days before, the Ministry of the Economy announced that it was planning to further privatize 50 state-owned enterprises.

Following the arrest, Gharibashvili lavishly praised the operation. "Today we witnessed that we are a state of law, we are a strong state with strong police," he told reporters. "This is the standard of absolutely civilized, democratic countries. Today our heroic police demonstrated the highest standards, corresponding to those of European, American, modern democracies."

Opposition figures saw it differently. "I personally, with many other people, promise [Georgian Dream chairman Bidzina] Ivanishvili, that today will be a watershed for him," said Gigi Ugulava, a leader of the European Georgia party. "He has marked his own end today. He can no longer live in this country."

Georgian Dream and the Interior Ministry issued statements saying that they had come under cyberattack. Georgian Dream implied that the opposition was behind the attacks: “amid the ongoing developments, it is not hard to guess where this criminal act could be coming from,” they said in their statement.