Georgian COVID immunization drive stumbles out of the gate

The death of a nurse, hasty European policy decisions and the Georgian church’s indifference all have contributed to a rocky rollout for the vaccination campaign. 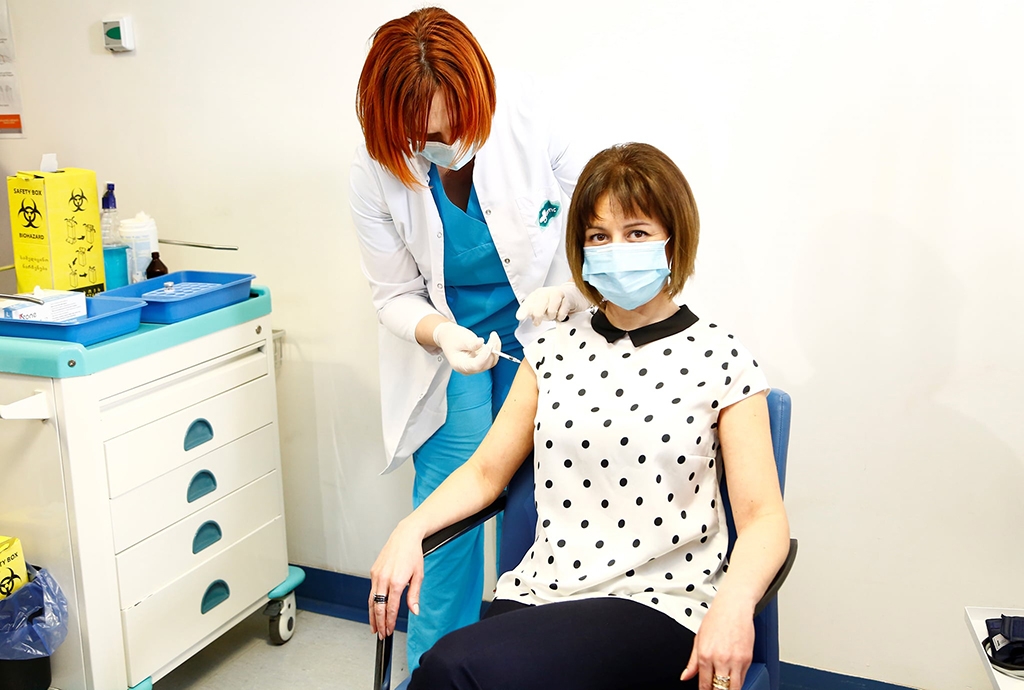 “I call on everyone to take this vaccine,” 27-year-old nurse Megi Bakradze told the camera. They were almost her last words.

Bakradze was filmed getting her AstraZeneca COVID-19 vaccine at the clinic where she works, Imedi (Hope), in the provincial town of Akhaltsikhe. She told the local TV reporter that lots of medications have side effects but that it wasn’t a reason to fear vaccination.

Half an hour later, Bakradze fainted and went into coma. She was rushed to the capital Tbilisi, where she was pronounced dead the following day, March 19. Health officials said that she had suffered an anaphylactic shock, a severe form of allergy. She is now believed to be the first person in the world to die of a coronavirus vaccine-triggered allergic reaction.

Her death, just four days into Georgia’s long-delayed vaccination campaign, further frightened an already skittish public. Healthcare workers, the first category of people eligible for the shots, have reportedly stopped showing up for the jabs. One clinic in the western city of Ozurgeti reported that of 13 people scheduled for vaccination on March 19, only six showed up.

“Our immunization campaign got off on the wrong foot,” said Deputy Health Minister Tamar Gabunia. “A lot of effort will be required to restore the trust.”

Trust had already been low even before the tragedy, with Georgians broadly hesitant of getting the vaccine. One recent survey showed that over a half of Georgians were reluctant to get the jab; it was conducted prior to the nurse’s death.

Even healthcare workers, the first segment of the population eligible to get vaccinated in Georgia, have been wary. Ahead of the rollout, state health officials complained about the low rate of applications and went so far as to ask the influential Georgian Orthodox Church for help. “We are asking you to stand by the doctors in this period and to cooperate because people have a lot of trust in you, often they trust you more than the doctors,” Amiran Gamkrelidze, head of the National Center of Disease Control (NCDC), said on March 16, in an appeal to clerics.

But the church, the single most trusted institution in the nation, chose to stay out of it. “The Church cannot take responsibility for promoting the vaccine as this is the responsibility and the purview of healthcare professionals,” a church spokesperson, Andria Jaghmaidze, said.

Then, just as Georgia was beginning its rollout, using AstraZeneca, a number of European countries including France, Germany and Spain, briefly suspended use of the vaccine over concerns of potential links to blood clots. The European Union’s drug regulator has since cleared the vaccine for use and European countries have resumed using it.

Before Bakradze’s death, only 3,642 doses of the vaccine were administered, out of the small and hard-fought-for first batch of 43,000 that Georgia received from AstraZeneca. Since then the pace has only slowed, as just a few hundred healthcare workers have showed up for the shots nationwide since March 19 and scores of appointment cancellations have been reported. As of March 23, officials have reported that 4,414 healthcare workers have gotten vaccinated.

Amid the low turnout of medical professionals, the authorities have opened up eligibility for the shots to anyone 65 and older. But the slowdown has damaged the chances for Georgia to reach its stated goal of immunizing 60 percent of the adult population by the end of the year.

Much of the public appears preoccupied with the quality of AstraZeneca vaccines or at least the batch given to Georgia, while many commentators say that attention should instead be focused on local clinics’ capacity to handle anaphylactic shock – a condition that any medication can trigger.

In any case, media coverage of Bakradze’s death continues to fan fears.

Georgian viewers have followed the televised drama of Bakradze’s distraught husband assaulting his late wife’s colleagues and her family as they tried to break into her clinic, which was guarded by police. The family has accused the hospital of failing to render appropriate treatment for the emergency.

The clinic’s doctors, meanwhile, insist they immediately provided the prescribed treatment, which as a rule includes an adrenaline shot and a dose of antihistamines and corticosteroids. Health authorities have backed the doctors’ claim but have nevertheless since moved to limit vaccinations to hospitals with strong emergency treatment capacities.

Health officials have rushed to assure the public that the benefits of the vaccines far outweigh the risks. “I have a 300,000-time smaller chance of dying from the vaccine than from coronavirus,” a former chair of the Georgian parliament’s health committee, Akaki Zoidze, told the television channel Mtavari Arkhi.

Many Georgians – about 35 percent, according to the poll – remain adamantly in favor of vaccination. Some took to Facebook to call on the authorities to let them sign up for shots if other Georgians remain skeptical.

Gabunia, the deputy health minister, said the age limit could be lowered to 55 if not enough over-65s turn up. She also announced that the Pfizer vaccine should become available in Georgia by the end of the week, which could help dilute immunization fears that are at least partly AstraZeneca-specific.

In the meantime, there are signs Georgia is heading into a new wave of the pandemic. There has been an uptick in COVID-19 transmission (528 new cases on March 23) as the nation recently began to emerge from months of strict lockdown. The highly contagious UK variant, now dominant across much of Europe, also has made its way to Georgia, with 50 confirmed cases.

Against this backdrop, health officials are imploring the public to continue with immunization. Gamkrelidze, the head of the NCDC, called on the media to help convince Georgian audiences of the importance of the shots and emphasized that Bakradze believed in vaccination and wanted others to follow her example.

“Megi, our young colleague, will forever be remembered in the history of Georgian medicine,” Gamkrelidze said in his elegy for the nurse. “She believed that immunization is what is going to end the terrible pandemic, which in one year took about 3,600 lives in Georgia and 2.6 million lives around the world.”