Georgian fascists step into the spotlight

As Georgia's fascist groups gain prominence, many wonder why the government isn't doing more to fight them. 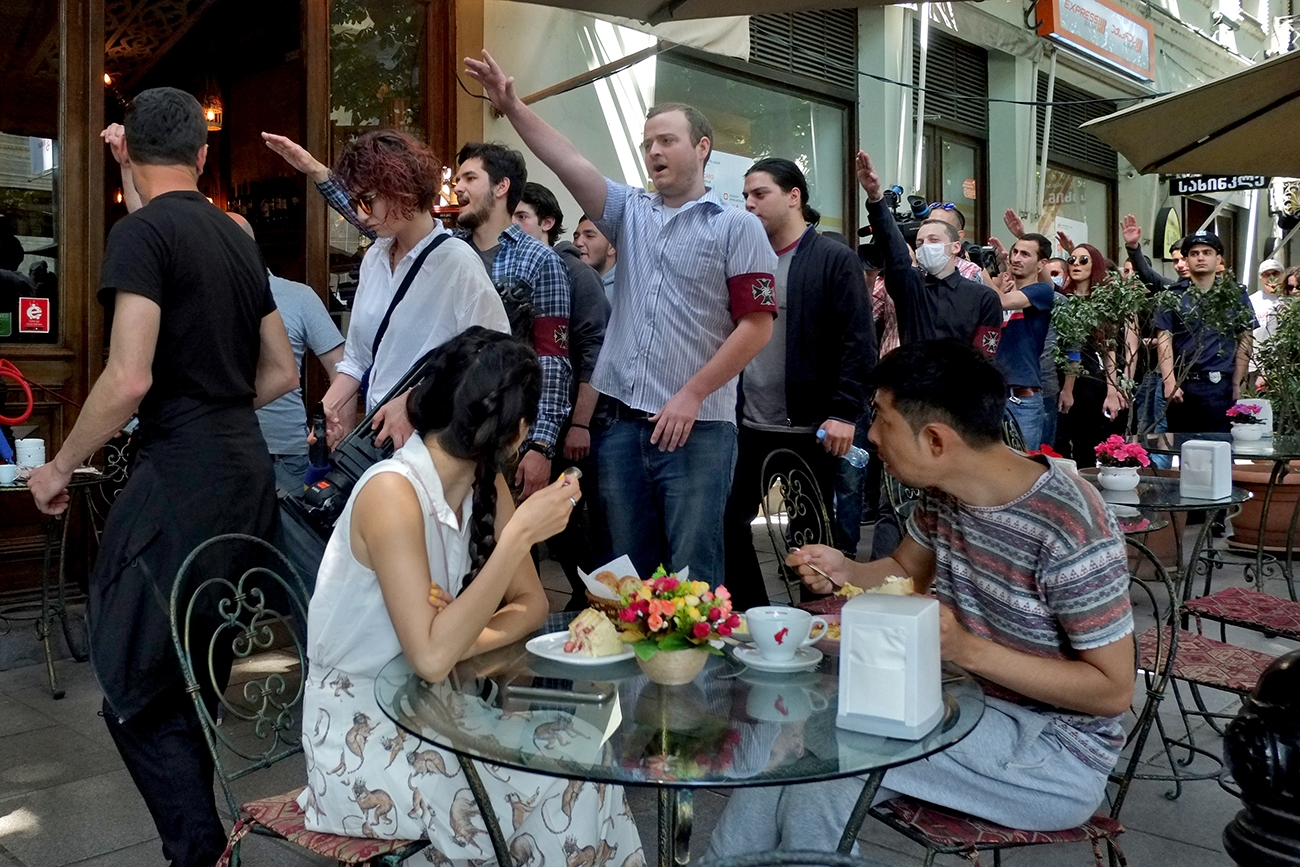 Members of the Georgian National Unity organization march through Tbilisi on May 17 to confront demonstrators supporting LGBT-rights. (Photo by Sopho Aptsiauri, courtesy of Liberali Magazine/liberali.ge)

A pair of tourists enjoy an al fresco meal at a café in central Tbilisi, looking with a mixture of curiosity and alarm as a group of young men pass them on the sidewalk, giving the Nazi salute.

A photo of the surreal scene has gone viral in Georgia, as it seems to define the turmoil in the country after a week of clashes over a drug crackdown, dance clubs and LGBT rights.

Many Georgians are mortified by the photo, tagging the Interior Ministry in social media posts and asking why people with Nazi-style gestures and armbands are being allowed to swagger about the streets. (Georgian law bans the display of symbols of totalitarian regimes.) Others joke – “your latte comes with a neo-Nazi moron on the side” – dismissing the demonstrators as a bunch of marginal and misguided youths that do not warrant so much attention.

Fringe as this particular fascist fan club may be, it has managed to reshape Georgia's national discourse as the country continues to wrestle with a widening cultural divide.

The young men saluting were members of Georgian National Unity, a small organization united around a pastiche of far-right slogans. They are led by 32-year-old Giorgi Chelidze, who says he is a “fascist even in his sleep” and styles himself a defender of “traditional values” – a phrase often used in the former Soviet Union as a euphemism for homophobia and anti-liberalism.

Georgian National Unity borrows its insignia from a World War II battalion of Georgian émigrés and prisoners of war who fought with the Nazis against the Soviets, and it is officially registered as a non-profit group. The group even has its own militia, appearing to number two dozen young men and women at most, who call themselves “blackshirts” in an allusion to Benito Mussolini’s shock troops.

Chelidze even feels a personal connection to il Duce. “Mussolini and I, by the way, have the same birthday, which is a thrill,” he said in one interview, where he also claimed that his group is an exclusive club with a strict membership policy. “The blackshirts, excluding the ladies, must pass a physical-fitness test,” he said.

Many Georgians shrug off Chelidze and his posse as a tiny subculture of war fetishists who have watched too many World War II movies or gone too far down a YouTube rabbit hole. But the group did manage to stage a violent show on May 13, when it held a menacing counter protest against young people who were rallying to defend Tbilisi's hippest nightclubs.

“They are a bunch of defenders of drug dealers and LGBT propagandists,” shouted Chelidze at the demonstration. He was backed up by his blackshirt boys, some wearing surgical masks and balaclavas, who shouted obscenities and tried to physically assault the clubbers. They were joined by an array of other reactionary groups, and the tensions nearly flared into fisticuffs.

The Georgian National Unity members appeared on the streets again four days later, on May 17, to confront LGBT-rights supporters who had gathered for an annual demonstration against homophobia. That’s when Sopho Aptsiauri, a reporter with the magazine Liberali, took the notorious photo.

It is easy to get lost in the web of Georgia’s far-right tagalongs and ideological bedfellows. Some groups exist only on Facebook; others are formally registered. Collectively they form an unruly force that the authorities have a hard time keeping at bay.

They often coalesce around a flagship ultranationalist coalition, the Georgian March. It is “an informal union that unites several neo-Nazi organizations,” said a recent report by the Georgia chapter of Transparency International, “Anatomy of Georgian Neo-Nazism.”

Armchair psychiatrists have spent a lot of time putting Georgia far-right movement on the couch: Is this a result of years of political turmoil? Young people’s search for meaning gone wrong? But it is not always clear if the leaders of these organizations even embrace the ideas they claim to stand for.

Two outspoken homophobic and nationalist characters in last week’s drama, Giorgi Gabedava and Melor Vachnadze, founded in 2013 a grant-making organization for promoting, among other things, the rights of “ethnic, religious and sexual minorities,” according to documents unearthed by the investigative journalism group ifact.ge.

The grants business must not have worked out. Gabedava now leads a nationalist group, Georgian Youth National Alliance that effectively promotes ethnic, religious and sexual majorities. He was arrested on May 13 as he tried to break through a police line to reach the demonstration of club-goers. Vachnadze, his own selfies suggest, frequents the very nightclubs he is railing against.

Sincere or not, government critics say the groups represent a threat to public order that the authorities don’t take seriously enough. During the standoff between club supporters and far-right counter protesters, police tried to keep the groups separate and let both have their say.

“Under such circumstances, the authorities have a duty to take action and strengthen security to protect the threatened group of people,” Giorgi Gogia, South Caucasus director for Human Rights Watch, told Eurasianet.

Yet a more forceful dispersal of the rioters, even though it may have been legal, could have boosted public empathy for the radical groups, warned Zurab Tatanashvili, an adjunct professor of social work at Tbilisi State University. The Georgian public is sensitive to the use of force after seeing protests violently dispersed in the past. Most Georgians also take a dim view of the LGBT movement and drug use.

“The radical groups would have portrayed themselves as the victims” had the police used force, Tatanashvili said. “So I believe it was the optimal solution in that particular moment […] assuming that these groups are not actually linked to the authorities.”

The ruling Georgian Dream party has been dogged by allegations that it, or at least some of its members, are interested in a tactical alliance with the ultranationalist groups.

The party portrays itself as a lenient power averse to using violence, “so they need a force that will disperse unwanted demonstrations on their behalf,” argues Ninia Kakabadze, a longtime liberal activist.

Some point to a pattern of mutually beneficial actions between Georgian Dream and far right groups.

Hooligans of obscure origins have attacked demonstrations by the Georgian Dream’s political opponents in the past. Georgian March staged a rally against immigrants last year just as the Georgian Dream was getting flak for tightening the screws on immigration and foreign investors. And now neo-Nazis have appeared when the government faced a backlash for storming nightclubs. Each time the government has played the role of mediator.

The Transparency International report also noted that several members of parliament, including members of Georgian Dream, have acted as bail guarantors for radical activists in the past. “I believe that they [the authorities] manipulate these [radical] forces,” Kakabadze, the liberal activist, said. As a result, the far-right groups are getting stronger “because the government is nurturing them.”

Transparency International went even further and suggested that some Georgian far right groups have Russian ties, naming members who also belong to pro-Russia organizations in Georgia.

Georgian Dream dismisses allegations of collusion with the extremists. The authorities did launch an investigation into calls for violence made by the Georgian National Union. Chelidze was questioned by police and two of his blackshirts were detained.