Salome Zourabichvili has largely been seen as a ruling party-managed figurehead. But she is lately charting a more independent path, particularly on Ukraine, cheering many of her former detractors. 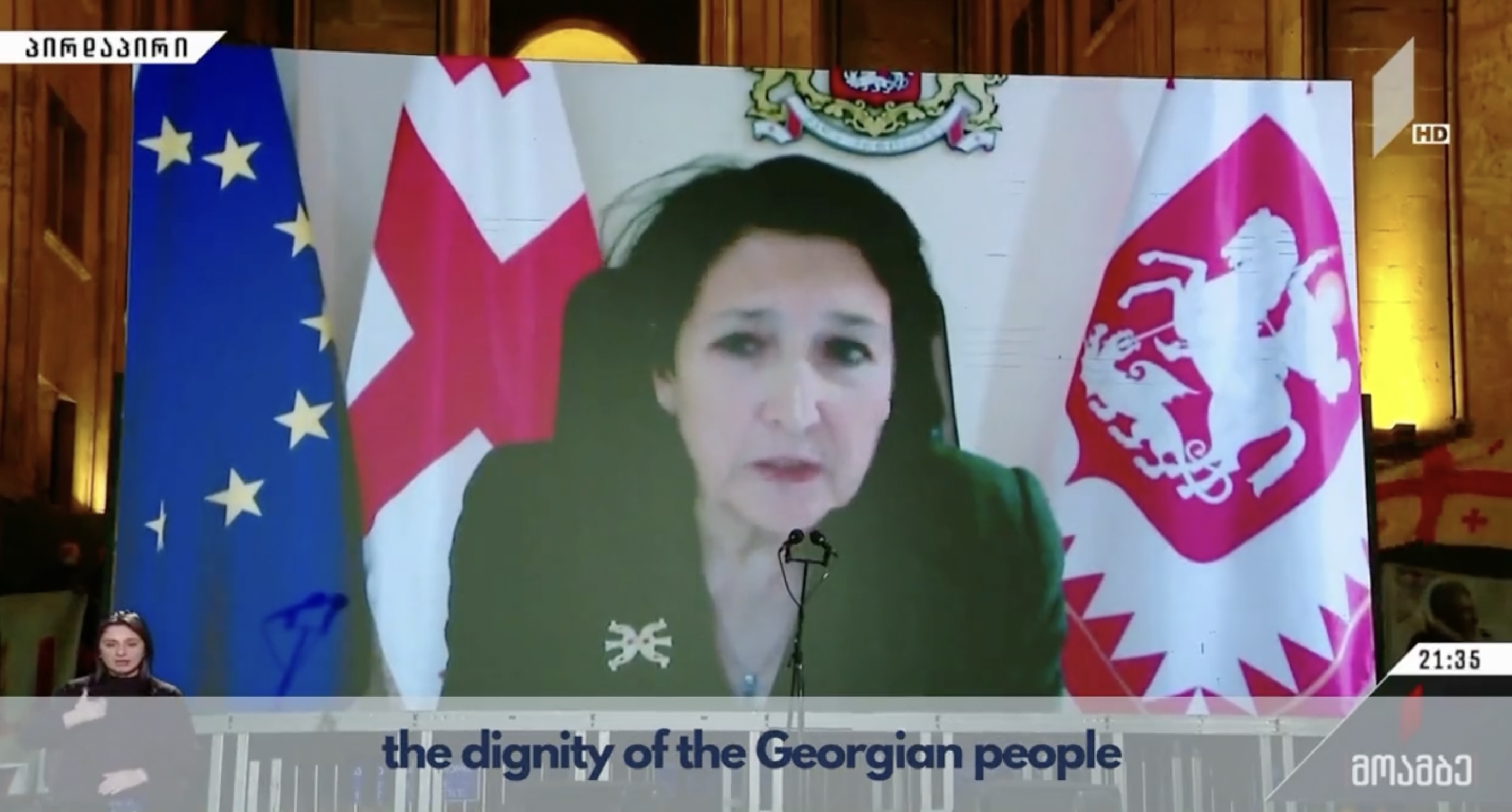 Screenshot of a live broadcast of Georgian President Salome Zourabichvili addressing a pro-Ukraine rally in Tbilisi.

Amid popular frustration with the Georgian government’s passive reaction to Russia’s invasion of Ukraine, one figure has emerged as an unexpectedly strong voice: President Salome Zourabichvili.

Zourabichvili’s rhetoric has been much stronger in support of Ukraine and condemning Russia than anyone else in the upper echelons of power. She has called for stronger government action in support of Ukraine, traveled to Europe to reaffirm Tbilisi’s alliance with the West, and addressed a pro-Ukraine rally.

Her activism has drawn rare praise from critics of the government, who previously have dismissed her as a lapdog of Bidzina Ivanishvili, the founder of the ruling Georgian Dream party widely regarded as the country’s informal leader.

On March 1, she directly criticized the Ministry of Foreign Affairs after it published a list of actions Tbilisi had taken in support of Ukraine, in which the only mention of the president’s office was that it had displayed a Ukrainian flag at the presidential palace. She was in Europe at the time, apparently discussing a fast-tracking of the country’s application for European Union membership.

“The support of the president of Georgia is not expressed only with flags, but in her clear statements!” Zourabichvili wrote on Facebook. “Her presence in Paris and Brussels today serves exactly this purpose!”

“Your position is very important,” commented Khatia Dekanoidze under the post. Dekanoidze is one of the leaders of the United National Movement, the major opposition party that has traditionally had little good to say about her presidency.

Zourabichvili’s popularity got a further boost when she addressed a massive rally in Tbilisi on March 4 where people gathered to show solidarity for Ukraine and listen to President Volodomyr Zelenskiy’s words for Georgian supporters. The crowds at the nightly rallies also have been calling for the resignation of the government, singling out Prime Minister Irakli Garibashvili for his refusal to join international sanctions against Russia and other steps perceived as excessively deferential to the Kremlin.

“You are the people who today represent Georgia’s dignity,” Zourabichvili told the crowd.

Gaining public approval has not been easy for Zourabichvili. The French-born diplomat, who had served as Georgia’s foreign minister in 2004 and 2005, was elected in 2018 in an unprecedentedly polarized campaign for the largely figurehead post, in which she ran as a Georgian Dream-endorsed independent candidate.

Her often-broken Georgian attracted ridicule, and she drew fire for accusing former president Mikheil Saakashvili of sparking the war with Russia in 2008 by allowing himself to be “provoked” into launching a military campaign. To critics, that amounted to a repetition of Kremlin propaganda.

After the election her every move or statement faced keen scrutiny, with a doggedness that at times amounted to schadenfreude.

But she has gradually distanced herself from Georgian Dream. Over the last year she has begun to criticize the party openly, including for unilaterally quitting the EU-brokered agreement between the ruling party and the opposition, or for the government’s dismantling of the State Inspector’s Office, an independent investigative agency.

She also has spoken regularly of the need to heal the political polarization that has split the country, including by initiating a “National Accord” process bringing together various opposing forces to discuss how to address the country’s persistent social and political conflicts.

Some have dismissed her seeming independence as an illusion, merely a more sophisticated version of Georgian Dream’s top-down management. According to this argument, she gives critics of the government’s hard-line policies the sense they have an ally in the leadership, while she in fact remains largely powerless to enact real change.

But even some of the fiercest government critics have nevertheless embraced her.

After the Georgian government changed course and formally applied for EU membership on March 3, key civil society groups called for her, as the “most acceptable person from the Georgian leadership,” to lead the process if the application progresses.

And UNM chairman Nika Melia, following her appearance at the Ukraine rally, responded to those who questioned the sincerity of her transformation.

“In this given moment, there is simply no time to discuss what happened in the past, to dig in the past,” he told reporters.