The reform would be a long-demanded shift from a system that allows the ruling party to amass power out of proportion to its support. Protesters were not mollified. 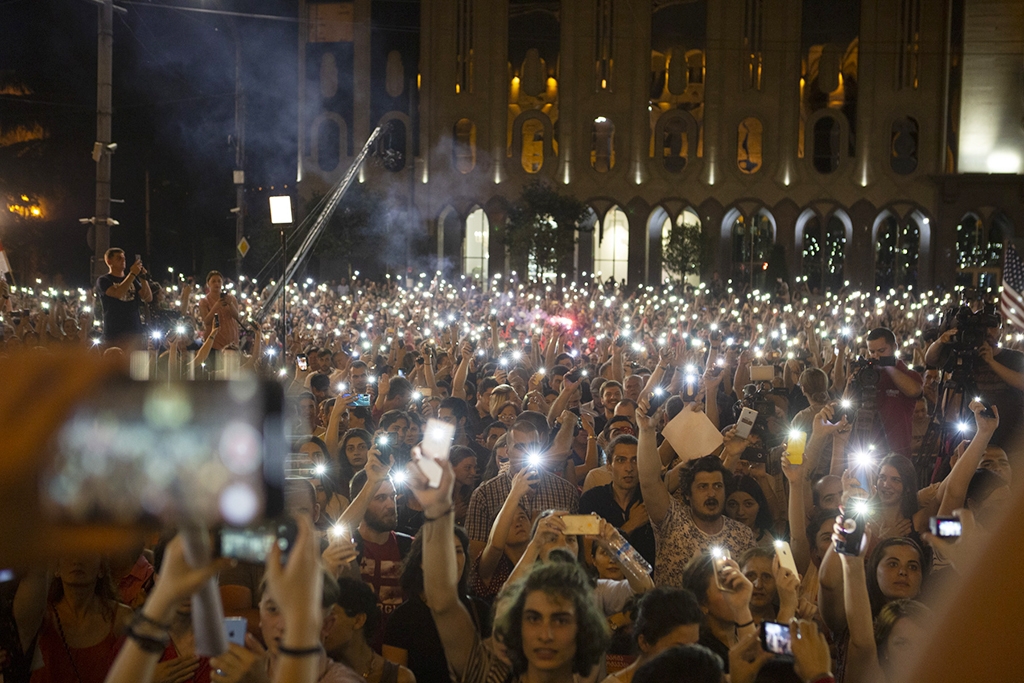 The Georgian government on June 24 proposed significant reforms to the electoral system in an attempt to defuse the crisis in the country. Yet demonstrations outside parliament continued. Protesters are calling for the resignation of the interior minister and the release of over 100 detainees arrested during a heavy police crackdown at an anti-government rally several days earlier.

After four days of demonstrations, the chairman of the ruling Georgian Dream party, Bidzina Ivanishvili, offered to entertain one of the key demands of the protesters: a switch to a proportional system for parliamentary elections. The existing system, a mix of proportional and winner-take-all systems, has helped GD secure more than 75 percent of seats in the current parliament despite having won only 48 percent of the national vote.

“Life makes changes in everything and every responsible governing political force is obligated to step up to the challenges faced by the country and, most importantly, hear the heartbeat of society,” Ivanishvili said at a June 24 press conference. He proposed conducting the next parliamentary elections – scheduled for 2020 – under a new system in which party representation in parliament would be proportional to the national vote.

Election watchdogs, overall, welcomed the planned reform, saying it will end the kind of party dominance that GD now enjoys. “Georgian civil society has been requesting a switchover to the proportional system for many years,” said the International Society for Fair Elections and Democracy (ISFED) in a statement. The group said that the change would secure a fair split of parliamentary seats among parties based on national support.

“It will certainly reflect the will of the population more than the current process,” Louis Navarro, a former head of the National Democratic Institute in Georgia and a frequent political commentator, told Eurasianet. “However, given that approximately 20 percent of the population has consistently expressed an anti-EU/NATO perspective … then it’s possible that a larger faction around that viewpoint could develop than there is now.”

Another of Ivanishvili’s initiatives, however, elicited less enthusiasm.

Ivanishvili offered to do away with the electoral threshold, a minimum level of voter support required for a party to enter parliament. “Abolishment of the electoral barrier is likely to bring into the legislative body a lot of parties with very small voter support and this is likely to have a negative impact on the efficiency of parliament’s work,” ISFED said. “An inordinate number of parties could impede the formation of a government and create the risk of political crisis and instability.”

Opposition parties described the proposal to remove the barrier as an elaborate trick by Ivanishvili, in which his loyalists will create many small parties, bring them into parliament and through them continue to exercise effective control over the legislature. The scheme would see GD effectively broken up into many small parties, the leader of the Victorious Georgia party, Irakli Okruashvili, told reporters.

The protests continued in spite of the concessions.

On the afternoon of June 24 convoys of honking cars and motorcycles, with some drivers blasting vuvuzelas and waving Georgian flags, jammed part of a highway in Tbilisi in front of the Interior Ministry’s glass-walled headquarters. The demonstrators demanded the resignation of Interior Minister Giorgi Gakharia, whom they hold responsible for the violent crackdown on the June 20 demonstration that left many protesters severely injured. The protests were triggered by the appearance in the Georgian parliament of a lawmaker from Russia, seen in Georgia as an occupying force and Public Enemy No. 1.

“Gakharia should be removed from the Georgian government,” said activist and media rights advocate Ninia Kakabadze. “All ministers should know that the day they use such disproportionate force against peaceful protesters will be their last day in office,” she told Eurasianet.

After the protests, video emerged of several riot police officers deliberately shooting rubber bullets into protesters’ faces. Two citizens were blinded in one eye after being hit by rubber bullets and two more remain in critical condition. One particularly disturbing bit of footage showed a protester, who was talking to the riot police from a distance with a smile, being suddenly hit in the face with a rubber bullet.

“Everyone who acted so brutally against the demonstrators must be found and brought to justice, but that will take lots of time to investigate and nobody will be standing in the streets for months waiting for it,” said Kakabadze. “It will only take a minute to fire Gakharia.”

The authorities defended the interior minister, who is seen as the muscle of GD and a close ally of Ivanishvili. “Do you really believe that on that day Minister Gakharia ordered [officers] to deliberately inflict bodily injuries on someone?” Mamuka Mdinaradze, a Georgian Dream member, asked at a press conference. Mdinaradze blamed opposition parties for inciting otherwise peaceful demonstrators into attempting to storm the parliament.

Still, in an apparent concession to the protesters, the state Prosecutor’s Office began investigating the use of excessive force by individual police officers. Late on June 24, the Interior Ministry suspended several officers pending investigation into using unwarranted force against the June 20 demonstrators.

Protesters argue, however, that the ultimate responsibility for the police abuse rests with the interior minister and continued to call for his resignation, and that the electoral reform did not sate their demands.

Grigol Vashadze, the leader of the United National Movement, a party loyal to former president Mikheil Saakashvili, insisted that even after the electoral change there can be no fair elections in Georgia as long as Gakharia keeps his post. “The battle for turning Georgia into a full-fledged, Western-style democracy is not over,” Vashadze said at a press conference.

Demonstrations resumed in the evening on Tbilisi’s central Rustaveli Avenue.